‘Malcolm & Marie’ Takes Aim at the Myth of the Male Genius

This Netflix romantic drama, made entirely during the pandemic, can be terribly self-indulgent. But it’s smart about how insecure and needy egotistical men can be — and how their significant others can cut them down to size.

When I was in film school, there were classmates who we absolutely did not want to become successful. It was a competitive environment, of course, but this dread was about something else: We just knew if this particular person became a big deal, he’d be absolutely insufferable. He already was insufferable, mind you, but amplify his ego and rampant insecurity with fame and money? Oh god, it would be a nightmare. One thing was for sure: If these accursed individuals did make it big, we definitely didn’t want to be around them then. Pity the poor bastards stuck in that guy’s orbit once the world starts giving him attention.

Malcolm, one of the main characters in the messy, indulgent but weirdly riveting Malcolm & Marie, is exactly the sort of person I would have hated back then. Played by John David Washington, he’s a writer-director who, after years of struggle, has just come from the triumphant premiere of his first feature. Settling into his gorgeous beachside rental house in Malibu, which was a perk from the studio, Malcolm roams around, swaggering and strutting like Muhammad Ali in the ring, as he recounts to his girlfriend Marie (Zendaya) the highlights of his amazing evening. The critics he talked to loved the movie! Everybody thinks he’s a genius! But Marie’s detachment clues us in to something odd: He’s not really sharing his success with her. It’s more like he’s gloating about it to her. Like she’s just another audience member, just one more adoring fan.

It’s probably why, at that moment, Marie says it: “You forgot to thank me.” She’s talking about his speech — the sort of introductory remarks that filmmakers give before their big premiere starts where they thank those involved in the movie. Tonight, Malcolm gave shout-outs to everybody, except Marie, and even though she insisted throughout the screening when he kept apologizing that it was fine… well, it’s not fine. She’s pissed. Malcolm insists it was just an innocent oversight. She insists it’s more than that — especially since she feels that his movie’s main character, a beautiful woman overcoming drugs, is lifted from her own experience battling addiction. It’s now one in the morning, and she swears she doesn’t want to fight, but Malcolm & Marie is the nearly real-time fight they end up having about Malcolm’s screwup.

From that small plot description, there are different ways this talky, showy film could go. Some audiences might think, like Malcolm, that Marie is jealous of her man’s big night, wanting to make it about herself. (After all, Marie used to be an actress — maybe she’s angry that she gave up on her dream while Malcolm is now reaping the benefits of not giving up on his?)

But although Malcolm & Marie is significantly flawed, what ultimately makes it worth the ride is its clear alignment with Marie. In recent years, society has shifted its position on the so-called difficult male genius — we no longer give someone like Mel Gibson a pass just because he’s made some good action flicks — but the Malcolms of the world are part of a less-toxic but nonetheless also reprehensible group of artists. Malcolm hasn’t sexually assaulted anyone or espoused bigoted views, but he is the sort of run-of-the-mill creative asshole that’s hell to be around. He thinks his acclaimed new movie will elevate him from who he is. As we’ll see over the next two hours, that’s not the case.

Malcolm & Marie, which comes to some theaters next Friday before arriving on Netflix on February 5th, will get a lot of notice because of how it was made. Written and shot entirely during the pandemic, the film is appreciably different from the first wave of quarantine entertainment because it doesn’t just feature actors talking to each other over Zoom about being in lockdown. The world of Malcolm & Marie exists outside of our COVID reality — nobody wears a mask — although writer-director Sam Levinson (who created Euphoria) compensates for the virus by placing all the action in and around this house as the two characters argue, make up, make out, start arguing again, cry, laugh and occasionally make some food. (Actually, it’s Marie who makes the food — a big bowl of macaroni and cheese — for Malcolm, an early sign of some of the inequities in this long-term relationship.)

A filmmaker making a film about a filmmaker who bitches about his critics can easily come across as a navel-gazing, self-aggrandizing twit. Shot in black and white on actual film — a rarity in our digital-heavy era — Malcolm & Marie runs the risk of being Levinson’s disingenuous attempt at a “confessional,” albeit one that looks ostentatiously artsy and is aided and abetted by two of Hollywood’s buzziest rising stars. (Zendaya won an Emmy for her work on Euphoria.) To be sure, there are plenty of reasons to find the film’s stagey design and inside-baseball themes masturbatory and blinkered. (If you’ve been dying to watch a movie that features discussions about William Wyler and the screenwriting process, Malcolm & Marie is the answer to your bizarrely specific prayer.)

But despite some considerable objections — not to mention that, outside of Who’s Afraid of Virginia Woolf?, it’s rarely that interesting to watch couples go at each other — I was able to get on this exercise’s wavelength because of how clear-eyed it is about its target. Maybe Levinson is doing little more than acknowledging his own self-absorption and thin skin. (Between Euphoria and his feature film Assassination Nation, the son of Oscar-winning director Barry Levinson has received his share of bad reviews — as well, I imagine, endless accusations that nepotism contributed to his meteoric rise.) But even if that’s the only reason Levinson made Malcolm & Marie, his two actors are so good that they make the takedown of the movie’s fictional director — and the brand of whiny, needy male egotist he represents — sufficiently satisfying.

It’s not easy to play someone who’s insufferable in such a way that he’s both comical and also human, but Washington (the very skilled actor son of Denzel Washington who’s been superb in everything from BlacKkKlansman to Tenet) capably gives us a guy whose talent is second only to his massive neuroses and obliviousness. Early on in Malcolm & Marie, he’s spouting off about how people think he’s the next Spike Lee or Barry Jenkins, turning the compliment into an attack on the very white film-critic community. As a Black artist, he thinks he has the moral high ground over his commentators — and he’s got a good point about how white writers frame Black-made films through their own limited perspective — but his self-righteous bluster is quickly undercut, first by Marie’s anger over being snubbed and then, hilariously, by the first published review of his film.

We’ve all seen movies in which the play, TV show or film within the story is ripped apart by a critic — Malcolm & Marie might be the first instance in which someone gets a glowing review… and yet still believes he has reason to feel aggrieved. The more Malcolm rants and raves, nitpicking every word choice and having a one-sided screaming match with the critic in his head about what she got wrong about his brilliance, the more Marie silently enjoys the torment he’s bringing on himself. For some artists, the only thing worse than a bad review is a good review, and Washington is terrific at showing how pathetic Malcolm is in a bravura sequence of unhinged shouting. It’s a showcase of the chronic insecurity and self-pity that bedevils so many people: They want to be successes, but only in exactly the way they imagined it. Anything short of that will leave them crippled by doubt and discontent.

But that’s not the only injustice visited upon Malcolm over this memorable night. Zendaya has a ball carefully slicing and dicing this man into little pieces. Malcolm opts for every trick in the “Man’s Guide to Having an Argument” playbook during their fight — he’ll be needlessly cruel, he’ll try to bludgeon her with his points, he’ll sweet-talk her, he’ll attempt to bully her and, finally, he’ll just break down in tears and be honest — and Marie has an answer for every one of them. Zendaya cannily suggests initially that Marie is merely the “supportive girlfriend” — someone who’s just meant to look amazing in a dress as she stands by her genius boyfriend — before revealing the pent-up anguish and hurt that Malcolm’s casual sexism has wrought upon her over the years.

Not that Marie is some helpless victim: She doesn’t just cut Malcolm down to size, she toys with him, knowing what buttons to push that will weaken his defenses. Malcolm’s masterpiece may have been stolen from Marie’s life, but in Malcolm & Marie she’s the true auteur, reminding him how his great artistic flowering had a lot to do with her — her love, her belief, her careful cultivation of their relationship and, oh yeah, maybe her actual life experiences. As powerful a physical presence as Washington is on screen, the slender Zendaya will quietly dwarf him by the end. 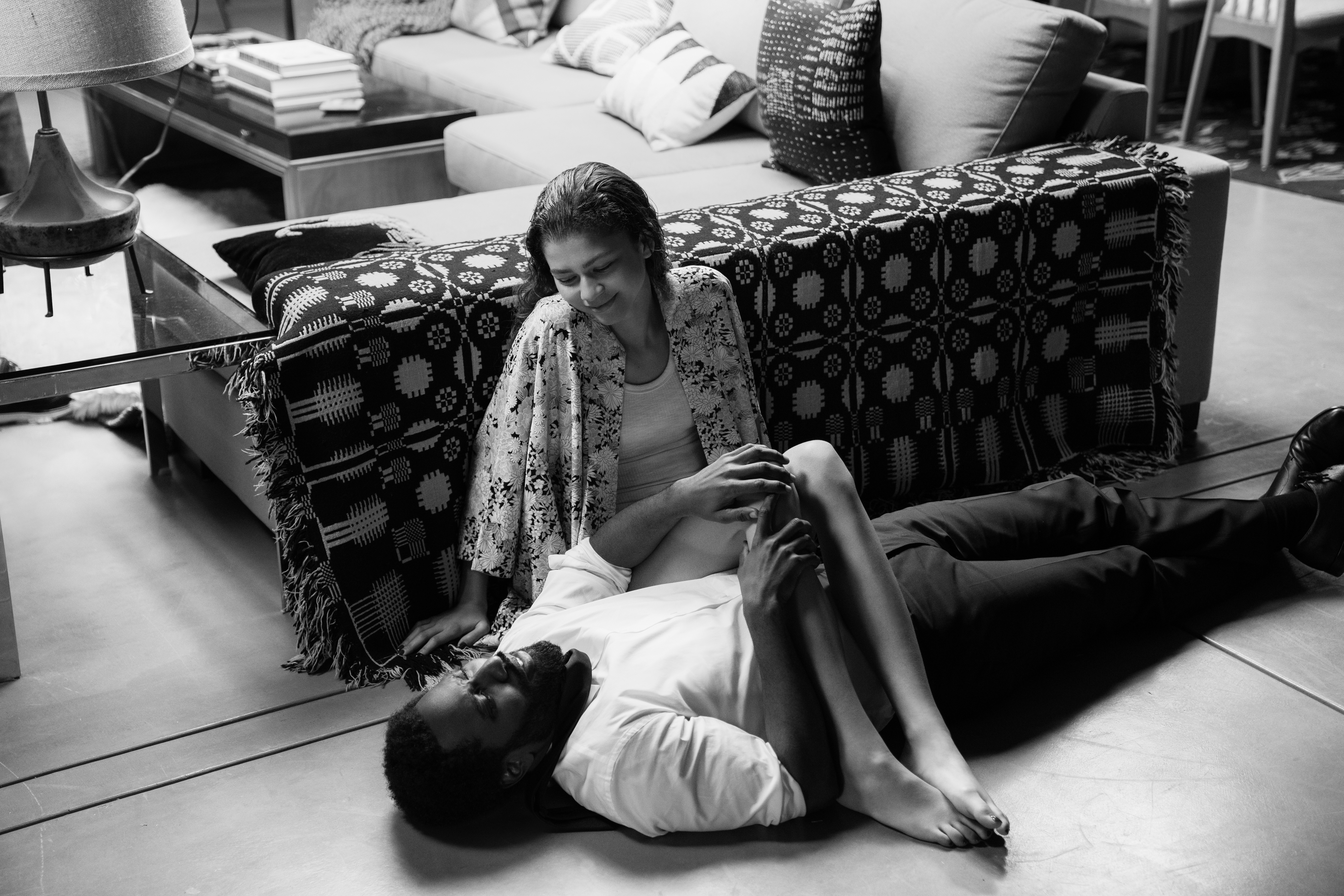 The pleasure of that not-so-peaceful transfer of power is what makes Malcolm & Marie enjoyable, even when Levinson flaunts his stylistic quirks and Hollywood references. On one level, Malcolm & Marie is a stunt — let’s see what kind of film we can make in the midst of a global crisis — and the story’s talk talk talk can get tiresome. (I can imagine Levinson’s direction often being, “Why don’t we have the characters now move into this room and fight a little?”) Yet it’s got a sense of humor about how guys like Malcolm think they can control everything — their lives, their careers, their relationships — and how often they’re amusingly disabused of that assumption.

But that faulty belief isn’t just held by insufferable filmmakers. I watched Malcolm & Marie with my wife, and on more than one occasion, I felt a cold chill of recognition — I could see how I’d behaved like Malcolm in certain situations, overreacting to a small slight or insisting I was in the right when, really, I was full of shit. The real dagger, though, was my wife’s look at that same moment as she turned to me — she recognized Malcolm in me, too. For all its shortcomings, Malcolm & Marie speaks to the small little moments of insufferability we inflict on those closest to us. I started off this piece talking about the self-absorbed asses I knew in film school — the punchline is that we all have the capacity to be that person. The only thing worse is when you can’t admit it.