Lunatics: The Men Who Loathe the Moon

For these guys, all a full moon does is further intensify their resentment toward Earth’s partner in the sky

“Fuck the moon!” my friend Calvin screamed, intoxicated after nearly three bottles of Stella Artois, as we walked down a narrow country road, sharing a box of fries doused in vinegar and mayonnaise. It was 2008, and we were 16, dressed in plaid shirts and checkered Vans, sporting poorly combed emo bangs. “Look at that fucking thing,” Calvin shouted at the moon, which was full that night, illuminating the grey concrete path in front of us. “What’s the point of it?”

In the hours it took for us to walk back home from a house party, he didn’t shut up about the moon. His hatred seemed mundane, but it was also genuine and visceral, even if he’d attributed it to drunkenness.

I started thinking about this moment again when, recently, a group of Catholic priests were discussing the merits of blowing up the moon on Twitter, and whether there was a religious justification for doing so. One priest even wrote a prayer in Latin to establish it as a holy act:

The Twitter exchange mirrored an incident that took place in 2017, when a Facebook post about blowing up the moon went viral. Dennis Jedson — allegedly from the U.K. (although no one is sure if he actually exists) — wrote about wanting to “get rid of the moon,” even going as far as to suggest that we place nuclear waste onto its surface in order to melt it. The post was tweeted out by the U.K.-based @criwank, and has since been retweeted more than 38,000 times; Jedsen even appeared on Esquire U.K.’s Angriest Men of 2017 list.

When I reach out to Chris, the man behind @Criwank, he tells me that he didn’t think anyone who engaged with the tweet shared Jedson’s animosity toward the moon sincerely. But he did say he wouldn’t be surprised if there were groups of people who genuinely want to get rid of the moon. After all, when his post first went viral, he received messages from people “suggesting we should send trash and toxic waste there.” 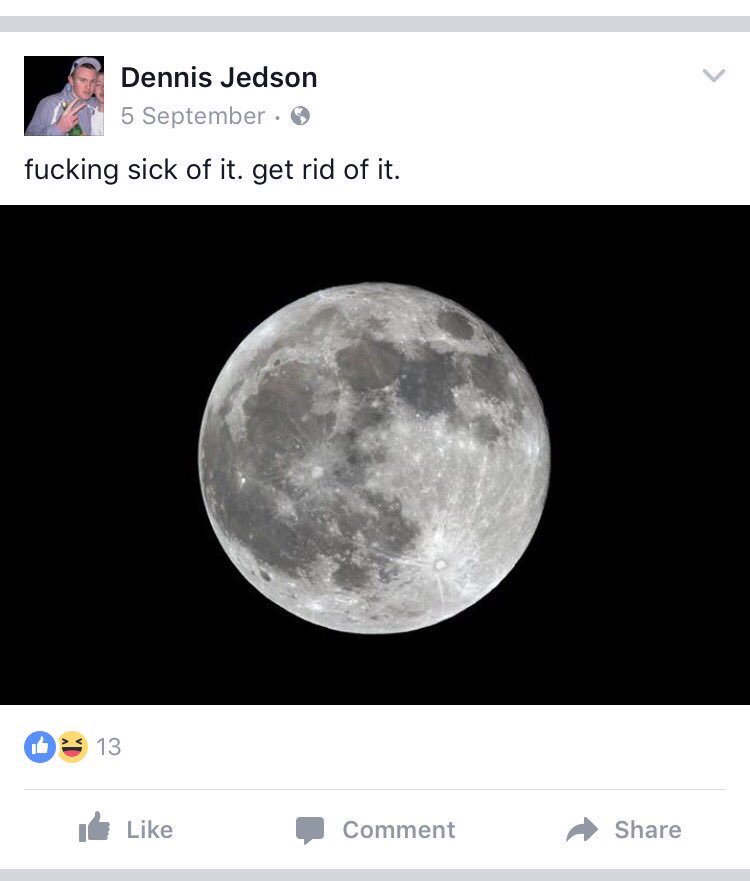 When I ask my Twitter followers about their feelings regarding the moon, some men refer to it as as “smug,” “self-satisfied” and “mocking”:

Others believe that, unlike the sun, the moon “takes credit for being bright, but was just reflecting other people’s light”:

Which, of course, feeds into a more common response — the moon is simply unremarkable:

One man who wishes to remain anonymous in order to preserve his relationship blames a lot of his romantic turbulence on the moon. “I’m not sure if you’re just messing around,” he writes via DM. “But I do actually hate the moon. It does nothing. It doesn’t bring joy, it’s just there. And it has such a high place in pop culture despite it not actually doing anything useful.” He concedes that — at least scientifically speaking — the moon is important to keep the Earth’s center of gravity in check and to regulate tides, but he is annoyed at how prominent the moon has become in his relationship, as his girlfriend is “getting more and more into astrology.” “She’s always talking about star signs,” he tells me. “Always talking about the fucking moon going into retrograde. I have no idea what that means. I don’t know what being a Virgo has to do with any arguments we have. All of it is confusing, and when I saw your tweet, I got angry all over again.”

Other men say that while they are, at best, apathetic toward the moon and stars, their girlfriends are all “really into zodiac signs.” Or as one guy puts it, “There is a bit of resentment that I spend my time having to learn about Zodiac signs, or spending Saturday nights reading star charts, when I don’t believe any of this.” A 2018 VICE piece features a number of straight men who refer to women who believe in astrology as “mindless bimbos.” Further, they consider astrology too feminine, running counter to their ingrained belief in self-reliance and rationality. “Astrology is a natural, intuitive way of telling time, and women are more in tune with nature,” astrologist Randon Rosenbohm explained to VICE. “Men, however, are builders who work with the material world. Unless you give a straight man evidence of astrology being real, they’re less likely to find it remotely interesting.”

But that disregards the longer history of male fear toward the moon. “There’s a secret history of the moon, a long tradition in which Earth’s largest satellite has been viewed as an object of fear, hate and distrust,” reads a 2017 Atlantic piece. It goes on to describe the Malleus Maleficarum, also known as the “Hammer of Witches,” the Catholic treatise used to justify the burning and drowning of suspected “witches” whose powers the priests believed to be “deeply affected by certain phases of the moon.” Meanwhile, during the Crusades, Pope Urban II, who called on the “lands of Christendom” to go to war against the “Muslim Saracens,” frequently referred to Allah as the “Pagan Lunar God,” in contrast to the “Solar deity” that Christ was often represented by.

Moreover, when “the patriarchy took hold, the moon became a symbol of fear, and women were taught to be ashamed of their monthly cycles,” Danielle Dorsey writes in an essay for Chakrub, a store that sells sex toys made of natural, healing crystals. She argues that as cities, heat and electricity developed, the moon was no longer considered a primary source of light, and as such, its importance was disregarded by a male-dominated industrial economy. “Those in power recognized that in order to subjugate women to this new dynamic, they would have to sever their connection to source. They promoted the belief that women were unclean and alienated them from society. Women were not allowed to have sex, prepare food or even enter churches while they were still bleeding.”

In literature, no writer was more fearful and disgusted by the moon than H.P. Lovecraft. “I hate the moon — I am afraid of it — for when it shines on certain scenes familiar and loved it sometimes makes them unfamiliar and hideous,” he writes in the opening of his 1922 short story “What the Moon Brings.” The story details one of Lovecraft’s nightmares in which he drowns in the sea in order to escape flesh-eating creatures encouraged by the “horrors of the evil, hateful moon.” Similarly, in The Dream Cycle, a collection of Lovecraft stories about an alternate reality, shapeless, expressionless beings “without any eyes, but with a curious vibrating mass of short pink tentacles on the end of its blunt, vague snout” live on the moon.

If Lovecraft’s vision of the moon was that of a terrifying, unforgiving object that punished man, the Space Race demonstrated how man was willing to destroy himself in order to tame it. That is, in 1958, both the U.S. and Soviet Union developed secret plans to fire nuclear weapons at the moon, as they felt threatened that the other would attempt to colonize it, especially once the Soviet Union had successfully launched Sputnik in 1957. “He who controls the Moon, controls the Earth,” U.S. Air Force Brigadier General Homer A. Boushey told the Aero Club in Washington a year later.

And if the U.S. couldn’t have it, no one could. As such, U.S. army chiefs allegedly developed “Project A119,” a plan to launch an atom bomb 238,000 miles to the moon, where it would detonate upon impact. The plan — which to this day the U.S. government has never officially confirmed — didn’t ever really get past the idea phase, but that hasn’t stopped conspiracy theorists from speculating as to whether the technology could still work. Nor has it stopped communities on sites like Quora or Yahoo! Answers from wondering how one would go about blowing up the moon anyway. In fact, this question is so popular that Gizmodo ended up crunching the numbers, finding that you’d need 9,000 atomic bombs of the 15,000-kiloton “Castle Bravo” class to obliterate the moon’s entire surface.

For the moment, though, it seems like we can hold our fire. But that doesn’t mean conquering the moon is off the table. Last April, for example, the Chinese government announced plans to invest into its space program, laying out ambitious plans to build a “lunar colony.” Not to be outdone, India is currently trying to decide whether it should redirect its space program resources from Mars to the moon, while companies like Virgin are proposing exclusive trips to the moon’s surface for the world’s richest people, with the aim of building luxury accomodation on its surface.