Men be gettin’ in barrels.

That’s my real takeaway from this wild story about Jean-Jacques Savin, a 71-year-old Frenchman, who drifted on current alone from the Canary Islands to the Caribbean in a large (but cramped) barrel of his own design. They journey took four months. Four! Months! In! A! Barrel! With two bottles of wine: One for New Year’s Eve, the other for his birthday. Other than that, just a lot of watching and catching and eating fish. Goddamn.

What would possess a man to live inside a barrel? To answer that, you’d have to begin with Diogenes, the 4th-century B.C. Greek cynic and ascetic who — as legend has it — renounced material wealth and even the most humble of possessions to dwell in impoverished simplicity. Nothing of his philosophy exists in written form today, seemingly because it took shape as a lifelong performance art piece. (He allegedly delighted in smashing taboos and urinating in public, including, once, on some rich Athenians at a banquet.) Among these ribald stories, though, there is one consistent detail: Diogenes was all but homeless, living in a wine barrel or a similarly large jar. He’s classically depicted in such a receptacle, often holding court with dogs.

To Diogenes, the barrel or clay tub may have symbolized the bare minimum of self-preservation: a shelter repurposed from its original use, just big enough to case his body, in direct communion with the open street, and — if it really did once contain wine — a nod of contempt to what he viewed as the sybaritic excess of the world around him. It’s a renunciation of all that is not necessary, not unlike the barrel in which Jean-Jacques Savin traversed the Atlantic. A barrel is the basic unit of endurance.

In the American consciousness, of course, the barrel has long been a metaphor of bare survival: For generations we’ve been fascinated by daredevils who go over Niagara Falls in a barrel and, for the most part, emerge unscathed. It’s fascinating, too, how superior a choice an actual barrel is for these stunts. Annie Edson Taylor, a schoolteacher, was the first to pull it off, on her birthday in 1901, traveling via the familiar-looking wooden model. Fifty years later, William “Red” Hill Jr., son of another daredevil, made an attempt in a barrel-like contraption made of inner tubes and netting that he called “The Thing,” but the attempt at unnecessary structural innovation (typical man shit) was a fatal disaster — The Thing fell apart, and Hill was killed by the fall. In another incident, a man named George Stathakis survived the plunge in a barrel but suffocated while awaiting retrieval; meanwhile, the pet turtle he’d brought was fine.

Am I saying that the turtle was saved by wearing a second, smaller barrel of sorts? Could be! 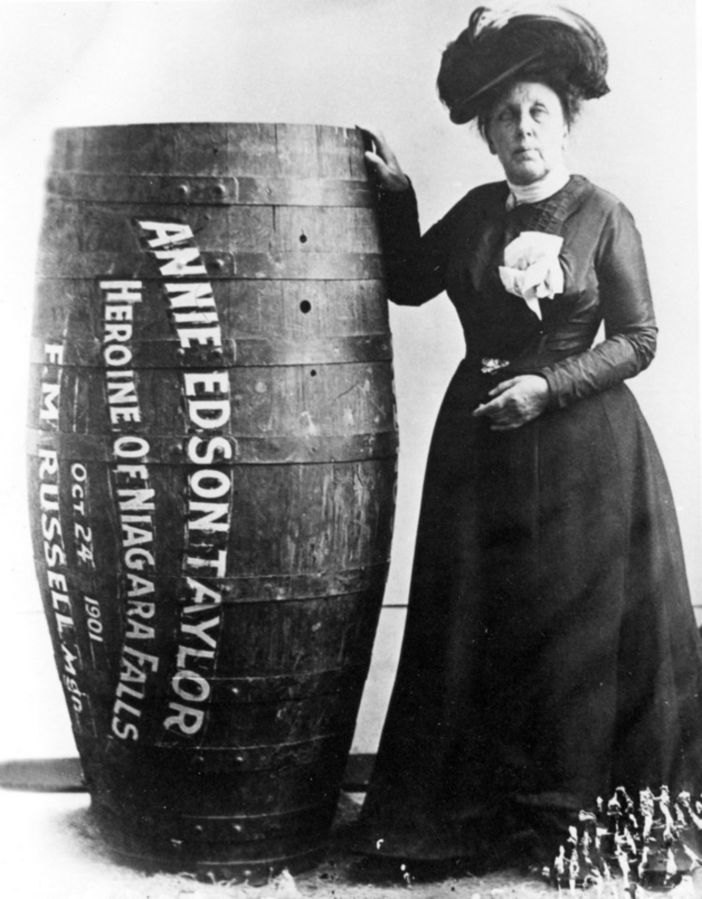 If some worried economists are right, and another recession is around the corner, we may all soon find ourselves in a figurative barrel — specifically, the “bankruptcy barrel” that came to represent destitution from the 1920s onward, possibly beginning with the comic character Moon Mullins, who would “occasionally go out and gamble and lose all of his money, whereupon he would wear nothing but a barrel.” Later, editorial cartoonist Will B. Johnstone developed the image of “The Taxpayer” as a scrawny man in a barrel, the government having taken everything else away from him. The costume would later resurface in the Occupy Wall Street protests. But where did we get the idea that in a crisis involving the loss of clothes off one’s back, one would still own a barrel?

Maybe humanity’s fundamental optimism precludes us from picturing total indigence. It is a weird mental rule of the species that those who have nothing must nevertheless have something, however pathetic, to shield the last of their dignity. This points as well to our stubborn belief in continual surplus — there will always, apparently, be a spare barrel around that nobody else is using. The existence of such a barrel, moreover, means that society is plugging along, making, packing and shipping various stuff, letting pieces of this industriousness fall where they may, for vagabond-philosophers to claim.

Barrels to wear and inhabit, for shooting fish, to house some monkeys, or laughs, or a stowaway. Really, you never know what you’ll find in there. A barrel is full of possibility.