Let’s Promote the Vaccine With Positive (Fake) Side Effects

Did you know the Pfizer shot makes your dick bigger?

I’m old enough to remember the utopian vision of the internet, the sense of possibility when we were logging on for the very first time. The future, we learned, would be shaped by instant communication, unprecedented networks and the availability of all human knowledge.

Almost three decades later, you’d have to be pretty dense not to notice how those capabilities have also made for a lot of headaches: a group of remotely linked collaborators can disseminate harmful misinformation to every corner of the globe and see it amplified in mainstream media by the end of the day. This is one way to tell the story of Trump, a Twitter troll who rose to politics with the birther hoax and sowed thousands more false narratives before he was ousted from office — plenty of them to do with COVID-19, the science of which he consistently undermined. That’s why, despite receiving the vaccine himself, many of his supporters plan to decline it.

A big conversation for the medical establishment right now revolves around how to persuade these Americans (and anti-vaxxers in general) to accept the safety and efficacy of the various products that immunize people from COVID-19. But, as the saying goes, sometimes you have to fight fire with fire. The rational, empirical approach can only take us so far with individuals who prefer an alternate reality to the strongest evidence of fact. Maybe it’s time, as Tumblr users have realized, to start making up a few positive side effects of getting jabbed with a dose. 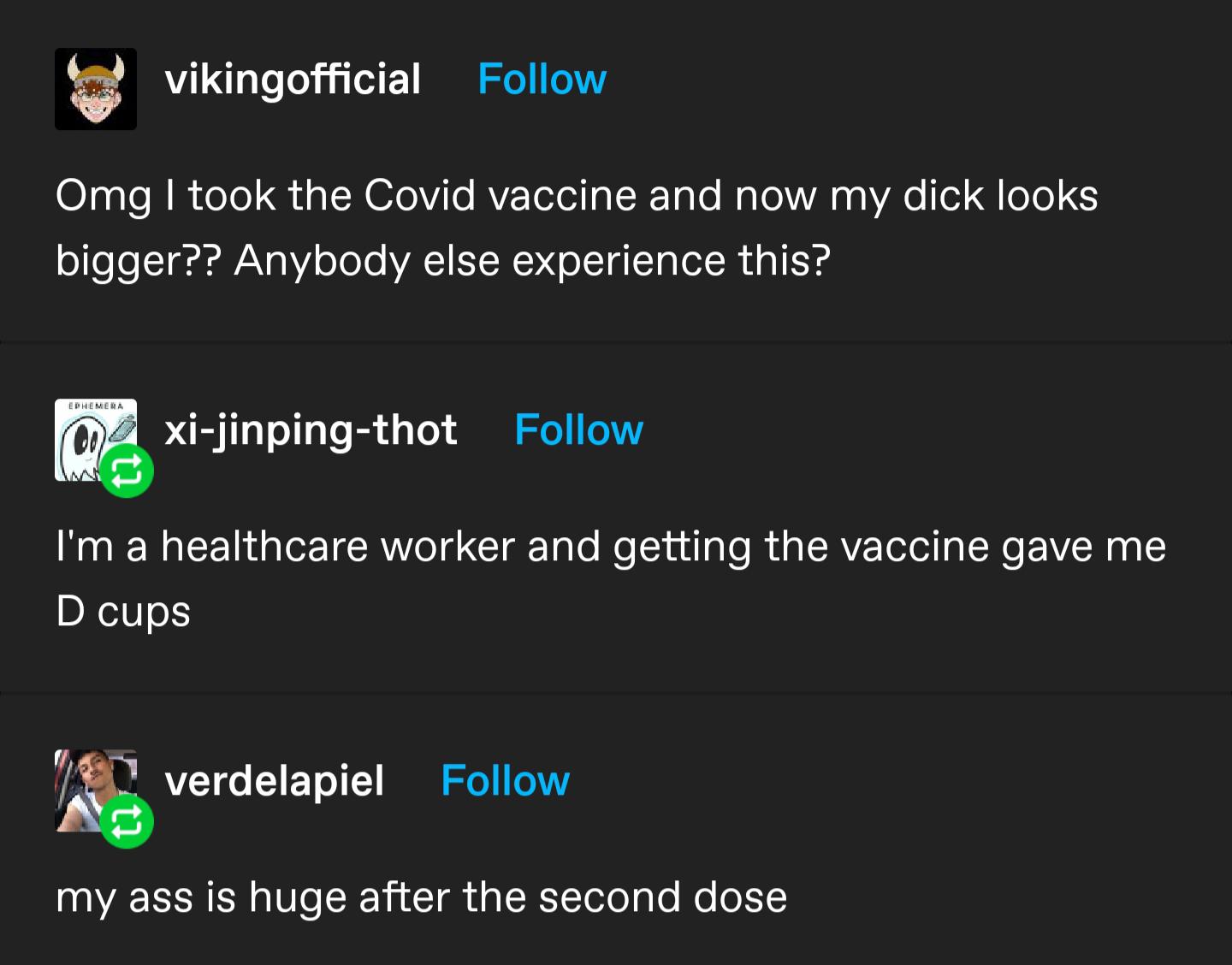 Think about it. Right now, the vaccine-hesitant demographic is sharing any dubious data or headlines that indicate the shots have potentially debilitating effects on the body, up to and including death. In cases where someone does die after or between vaccinations, a CDC review after the fact — establishing that the vaccine wasn’t to blame — won’t reach the same alarmist, paranoid audience that took the initial reports as proof of a murderous conspiracy orchestrated by the government, Bill Gates and Big Pharma. The better way to sway these folks is to inundate them with counter-misinformation that makes the vaccine sound like a miracle elixir. You know, like when there’s a certain kind of insect eating your crops, so you bring in an invasive species of toad to eat the bugs, and then the toads take over the entire ecosystem. What have we got to lose?

This, in my eyes, is working with the prevailing dynamic of the internet rather than against it. Fact-checking is the dull, dreary business of nerds and wonks, and nobody likes being corrected. But we don’t have to debunk the horseshit about the vaccines making your arm fall off or whatever if we provide a more interesting and attractive lie. Tell those MAGA dudes in lifted trucks that researchers found the Pfizer formula makes your dick grow and they’ll be calling for an appointment within seconds. After all, it’s the same company that makes Viagra. Maybe this has some of the same ingredients?

No, I suppose it’s not strictly ethical to facilitate the spread of rumors that taking the vaccine will give you the proportions and sexual stamina of a porn star, regardless of good intentions. On the other hand, I find myself wishing journalists wouldn’t rush to discredit such obvious nonsense, if only so it has the chance to influence a more gullible sector of the population. Maybe it won’t matter, since these people aren’t much for vetting what they see on social media to begin with. For my part, the minute I’m vaxxed, I plan to say that it gave me 20/20 vision, erased my credit card debt and added another bedroom to my apartment.

I mean fuck it, let’s throw everything at this and see what sticks. I’m tired of the truth. Bring on the super-serum.