Actually, it looks like Bert and Elmo were in on it, too

As we approach the 20th anniversary of September 11th, old conspiracy theories about the terrorist attacks are starting to resurface. While most of them have been disproven by everyone from the U.S. government to Popular Mechanics, one conspiracy has never been thoroughly investigated: “Did Kermit cause 9/11?”

Okay, obviously, I’m joking. But although I personally find most 9/11 conspiracy theories to be absurd if not downright offensive, I can’t help but love this one. If you’re unfamiliar with “Kermit Did 9/11,” it lays blame for the September 11th attacks on the host of The Muppet Show. The allegations are so patently absurd that they render themselves harmless, but as a die-hard Muppet fan, there’s another reason why I love the joke — most Kermit memes are random gags, yet “Kermit Did 9/11” actually stems out of an obscure piece of Muppet history.

During the 2002 holiday season, NBC premiered the largely forgettable It’s a Very Merry Muppet Christmas Movie. Making use of the same premise as It’s a Wonderful Life, the movie finds Kermit wishing he’d never been born after failing to save the Muppet Theater. He’s then transported to an alternate timeline where he sees how the world would be had he never existed. In this reality, Fozzie is a pickpocket, Rizzo the Rat is being eaten on Fear Factor and Miss Piggy is a lonely spinster. In the Miss Piggy scene, we can see out her window into downtown Manhattan, where the Twin Towers are clearly visible. In other words, in 2002, in a timeline where Kermit never existed, the Twin Towers still stand.

From that obscure detail in an even more obscure Muppet film, a conspiracy grew. As Adam Downer, senior editor at Know Your Meme, explains, “In 2013, the Tumblr account Nerdy Facts posted the trivia that the Twin Towers stand in the movie’s alternate reality, and the next day, the post was reposted to Funnyjunk with the title ‘Kermit is a Terrorist.’” A few years later, the joke had taken off enough that the director of It’s a Very Merry Muppet Christmas Movie chimed in, explaining that it was a mistake. The movie was filmed in Vancouver, and the background they used in that scene predated 9/11. 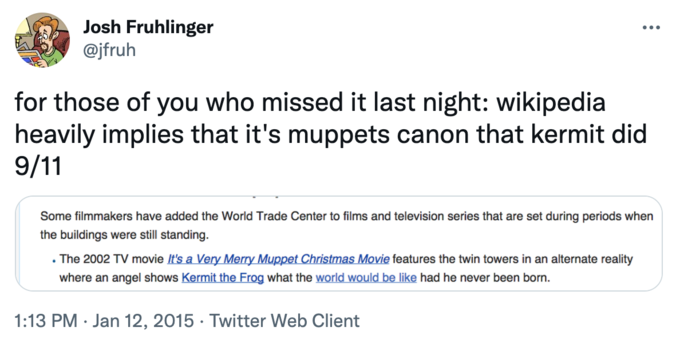 Unsurprisingly, the director’s statement did nothing to quell the conspiracy, and the joke only spawned more and more iterations. 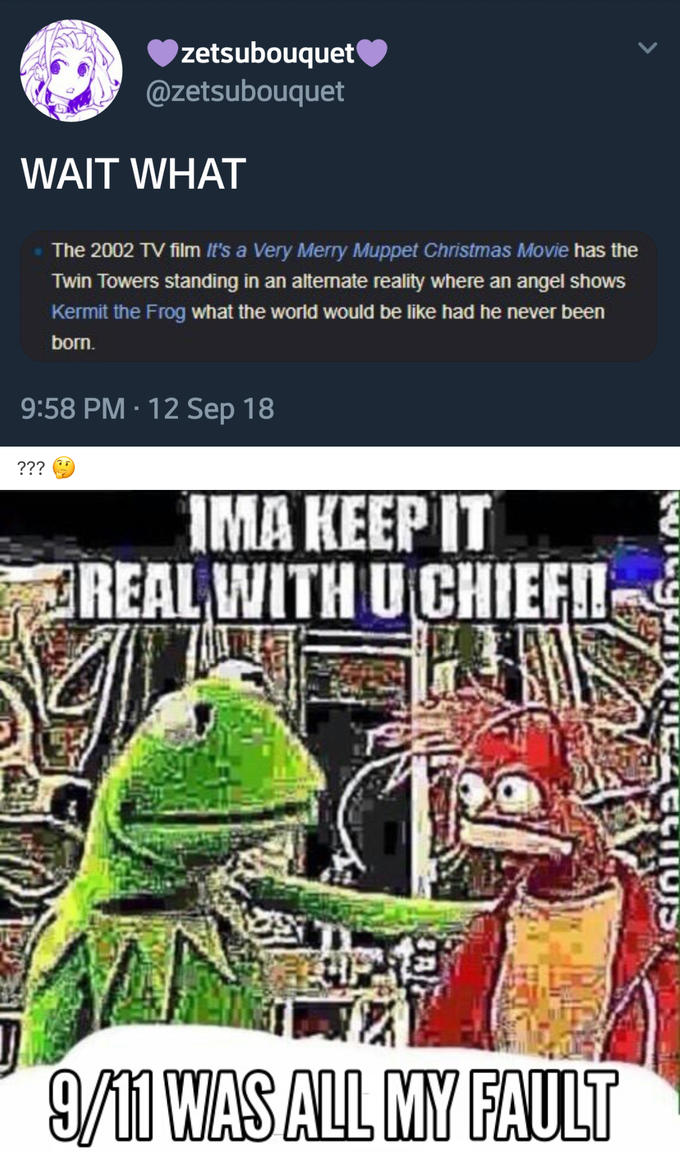 The joke’s proliferation mirrored something that happened right around 9/11 with another Muppet: Bert from Sesame Street. In October 2001, an anti-America/pro-Osama Bin Laden rally occurred in Bangladesh where supporters held up posters of the al-Qaeda leader. On one of the posters, an angry image of Bert was seen beside Bin Laden. 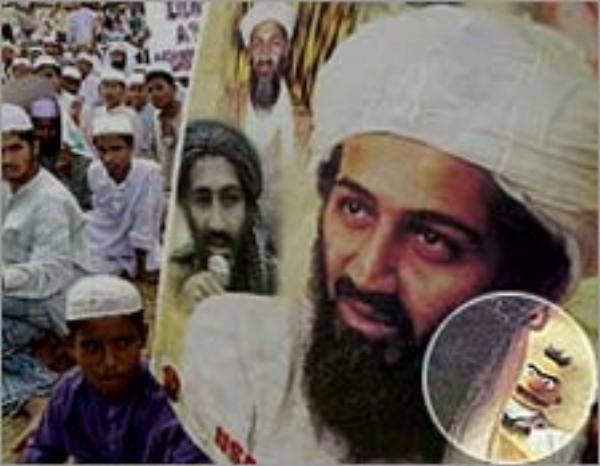 How did it get there? Well, that story begins in 1997 with Filipino artist Dino Ignacio. “Back in 1997, I was living in the Philippines,” he begins. “One night, I was at my computer. On my desk, I had a Bert doll that I’d given to my niece, but she didn’t want it, so I took it back. Back then, there wasn’t much comedy on the internet — most websites were academic — but I wanted to make something funny. As I was looking at Bert, I said to myself, ‘Gosh, this guy looks evil.’”

From there, Ignacio made a joke website called “Bert is Evil” featuring photoshopped images of the unfortunate Muppet in a variety of precarious situations — he was at a KKK rally; he was standing beside Hitler; he was fondling a young Michael Jackson; he was having sex with Pamela Anderson. “At first, the audience for the website was like, four or five of my friends,” Ignacio tells me. “But then it got picked up by a print magazine called Internet Underground, and it became really popular. I even won a Webby in 1998.”

Soon, Bert is Evil was getting so much traffic that Ignacio’s web hosting service asked for more money to support the traffic. Unable to afford the increase, Ignacio offered Bert is Evil up for other sites to “mirror,” which basically means he allowed anyone to copy the site. The result was effectively the internet’s first viral meme, as everyone was free to update their version of the site however they liked and create more compromising pictures of poor Bert.

In 1999, Ignacio moved to the U.S. as an international student. By then, he was pretty much done with Bert is Evil, even though the joke was still proliferating online. But two years later, Bert appeared on the poster with Bin Laden, and it suddenly took control of his life. “There was no image of Osama Bin Laden on my original site,” Ignacio explains. “But after I let everyone mirror the site, one of the mirrors in the Netherlands made an image of Bert with Bin Laden prior to September 11th.” Inadvertently, this image was gathered up with a bunch of other Bin Laden photos and made into a poster by a printer in Bangladesh. Before long, Reuters captured a photo of it.

“I was being interviewed by news outlets and getting threatening phone calls from right-wing people,” Ignacio recalls. “I was afraid that I was going to lose my visa.” It got so big that Sesame Workshop finally got involved and threatened Ignacio with a lawsuit. He quickly took down his own Bert is Evil site, but the mirrors still existed and a few even remain on the internet today.

As for why Muppets like Kermit and Bert have attracted so much attention in this regard, Joe Hennes, owner and editor-in-chief of the Muppet fansite Tough Pigs, theorizes, “With the Muppets, aside from the Sesame Street characters, they were never really intended for kids. They’ve always straddled the line between being for children and being for adults. With that, I almost think we give them permission to be the subject of naughty jokes, be they jokes about their non-existent genitalia or crazy conspiracy theories about them being terrorists.”

Hennes makes a valid point, but part of me wonders if there might be a bit more to it than that. After all, the similarities between “Bert is Evil” and “Kermit Did 9/11” are uncanny, and the suspicious Muppet activity doesn’t end there. In 1976, Cookie Monster was featured on a rather prescient — if not downright compromising — cover of Sesame Street Magazine.

And, at present, there’s still a popular meme showing Elmo delighting at the site of a nuclear explosion.

And, the guy who created Tickle Me Elmo was a real-life Unabomber suspect because of the odd mix of microchips, batteries and doll parts he was sending in the mail to Tyco Toys at the time. 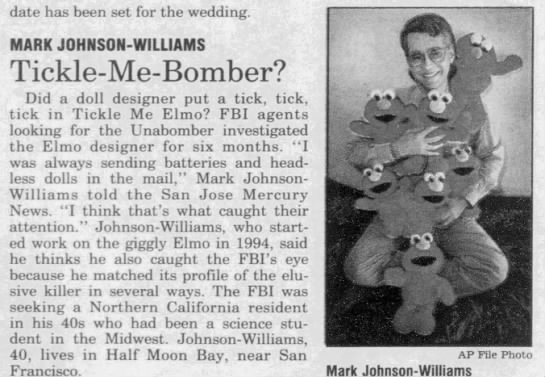 And what is the Muppet Harry if he is not a terrorist?

Can all of these things really be a coincidence? I say it’s time the FBI follows up with the frog.