Just Who Are Those Assholes Who Leave Fake Tips?

Jesus may save, but he don’t tip, apparently

Get a load of this: 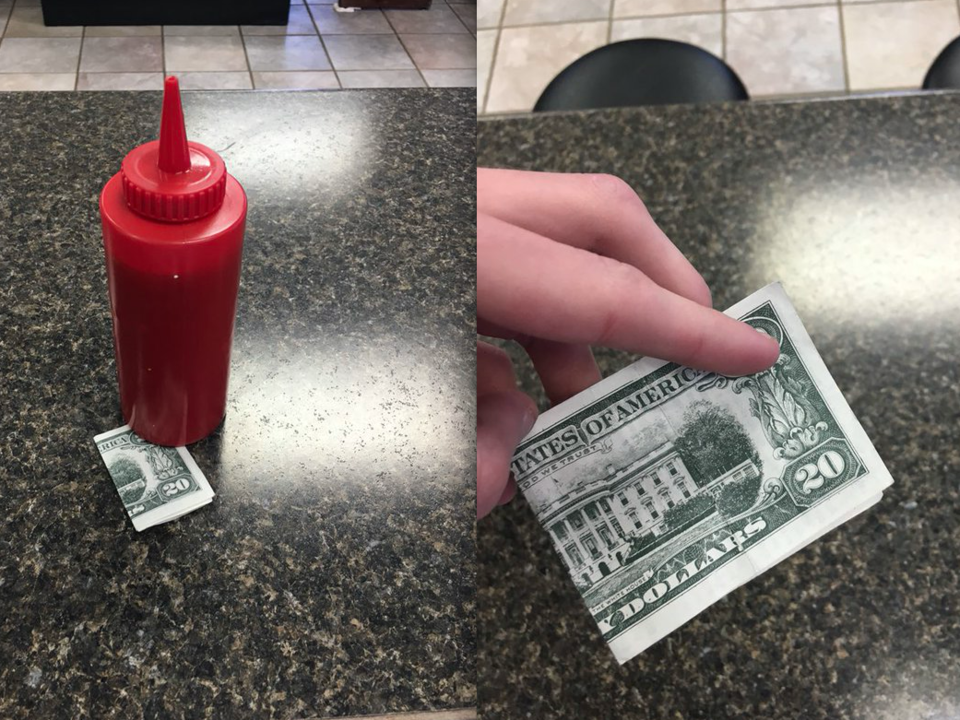 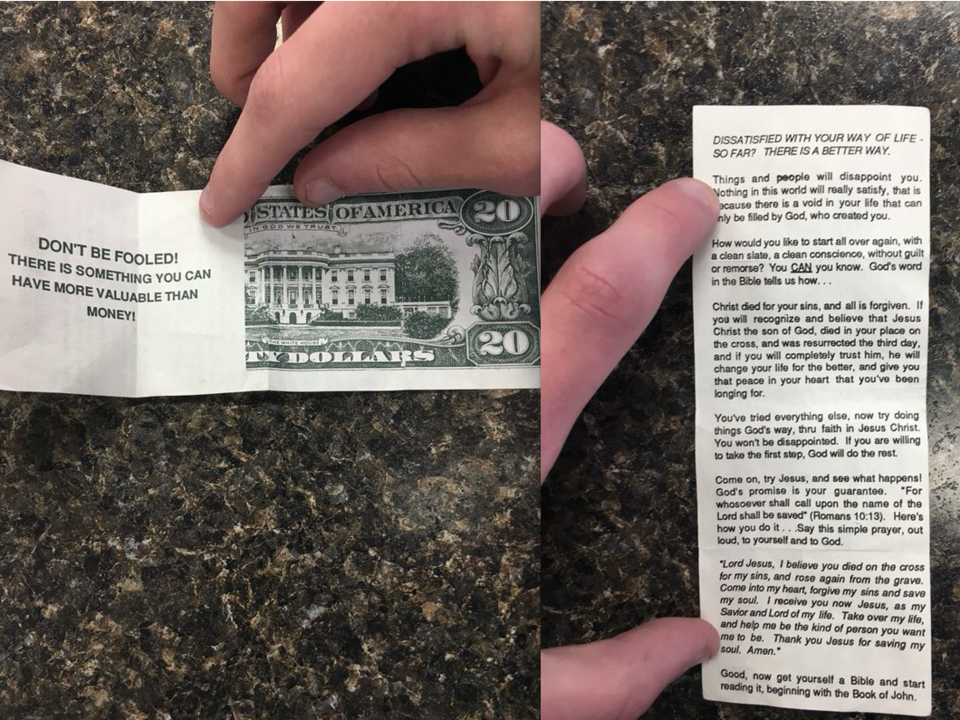 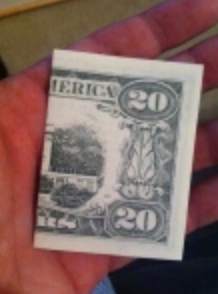 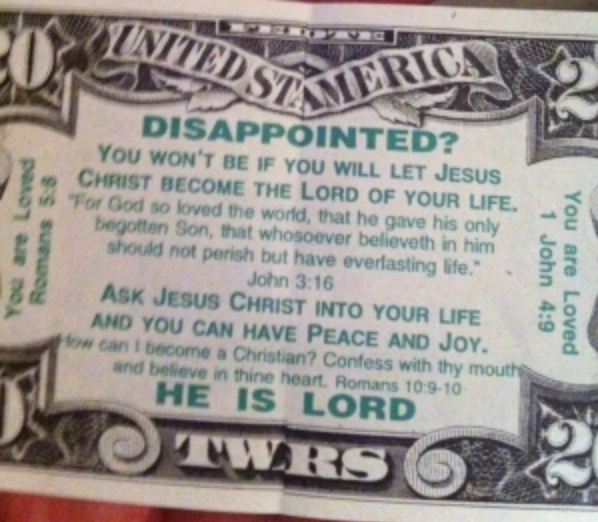 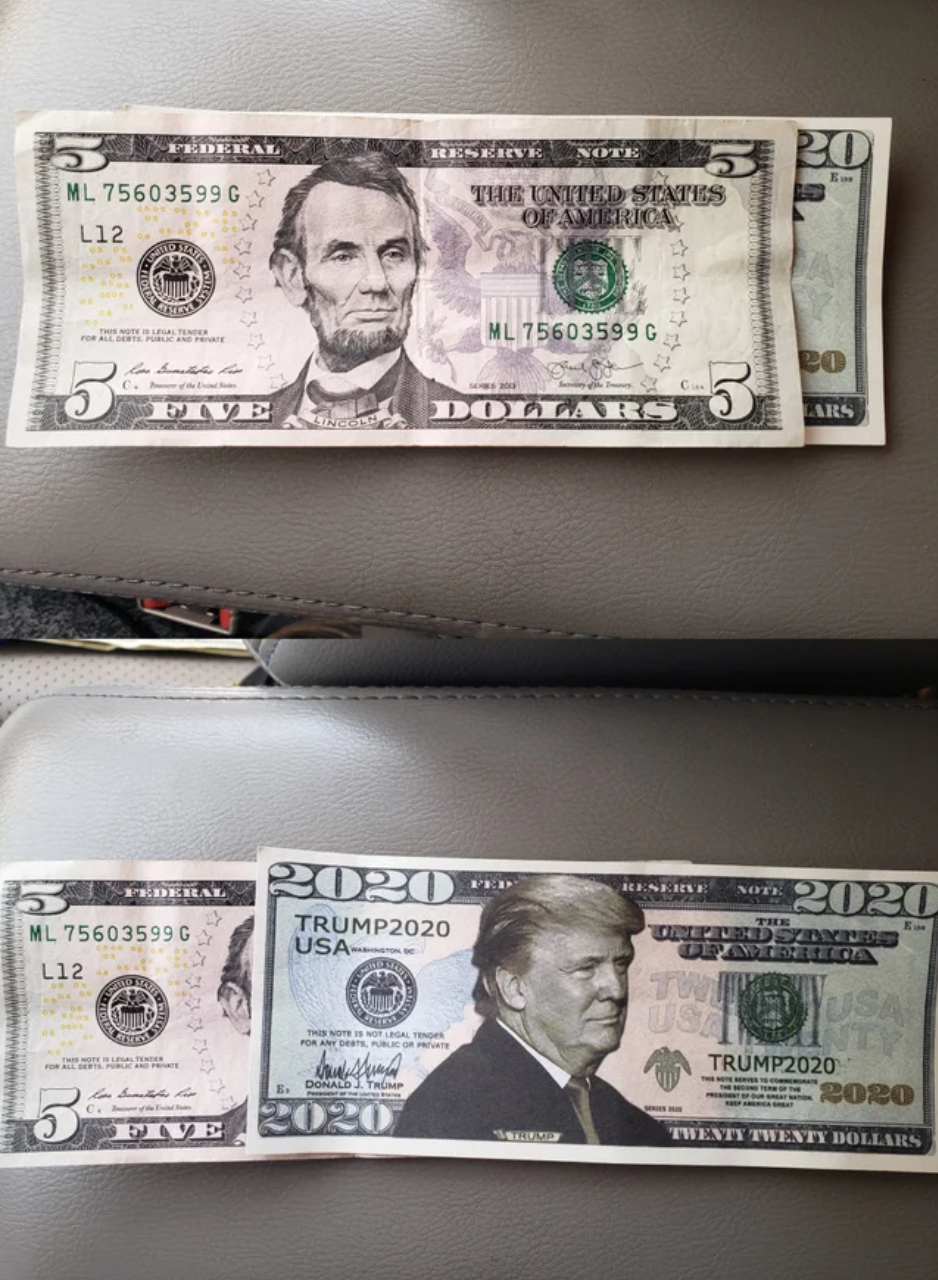 These are all examples of fake tips people have shared on the internet — posts by justifiably pissed-off food servers who, instead of getting the tip they deserved, received some fake money with either a political or religious message. As one of the servers this happened to told Business Insider, “I’m 17-years-old, $7,000 in debt because I had to buy myself a car, juggling full-time school and working seven days a week. Getting a $20 tip at the restaurant I work at is very, very rare. I wanted to tell him that I only make $3 an hour and bust my ass at my job to make way less than I deserve, but he was gone by the time I had the chance to.”

Sadly, there are many more examples online, too, like this person who got that Trump dollar. As they (surprisingly mildly) pointed out on Reddit, “Here’s a TIP, it’s trashy as hell to leave fake money as a tip that advertises your candidate.”

After a little asking around as well, I soon found out that this has happened to people I know personally. “It’s happened multiple times,” says my friend Jerica, who works as a server in a chain restaurant in New York. “One time I vividly recall, I had a table of four adults, and throughout the whole experience, they were paying me compliments about my service. Their check was around $120, and on their way out, one gentleman handed me the check book and said, ‘Thank you, you’re a wonderful server.’ Obviously I got excited to open it and see what was written on the tip line. Well, they wrote in ‘zero’ and in the checkbook was a religious brochure and a card with a phone number to call.”

There was also this guy, who was trick or treating with his kids — his kids were excited because one house was giving out cash, but were disappointed when they discovered it was a fake $10 bill. He later posted on his blog about it, asking, “Who thought that making [this] look like actual money was a good idea? Are they that desperate to get someone to touch it? Sure, you grab them on the front end, but do you really want to start the most important conversation ever with disappointment?”

While this is nowhere near as bad as deceiving someone who’s been busting their ass all night to make sure you have a pleasant meal, it’s still a shitty trick to play, especially on a kid. And the dad above raises a good point: Why the fuck would anyone be inclined to join that religion after getting one of these? Admittedly, I’m not a terribly religious guy, but I can’t imagine I’d suddenly want to be saved by Jesus Christ if I was just duped by one of his followers.

I also got to wondering whether this is even legal — these people are, after all, handing out bullshit disguised as legal tender, which surely qualifies as some form of counterfeiting. I reached out to the Secret Service to find out more. (Yes, that Secret Service; you might be surprised to hear this, but in addition to protecting the president, the Secret Service’s job is to deal with counterfeiting — that was its original function, in fact).

Sadly, the agent on the phone told me that this wasn’t really something that people could get into trouble for. Now, if it was a legitimate counterfeit bill — one that resembled real money and was trying to be passed off as real money — it could be reported to the Secret Service because, even though a tip is voluntary, they’re still passing off fake money. As the agent explains, “It’s not the nature of the transaction that concerns us, it’s the person spreading counterfeit currency.” As for these phony bills, they — arguably — aren’t designed to be passed off as real money, as it’s clear those religious dollars are fake as soon as you unfold them.

The Secret Service adds, “If someone gave you something as a keepsake or memento for any reason, that’s generally not something we concern ourselves with,” and yeah, that applies even if that keepsake is totally unwelcome. So, unfortunately, we can’t lock up these fuckers for passing these out. But we can find out why these things are made in the first place.

The Trump dollar above, for instance, was made by a company called Rocky Mart; meanwhile, the religious ones, called “money tracts” (as the word “tract” refers to an excerpt of religious literature), can be bought through religious websites like this one.

Naturally, I wanted very much to rip into these religious nutbags and demand to know why they were selling stuff expressly to trick people, but at every turn, I was surprised at how inoffensive their intentions seemed to be. At first, I called Swanson Christian Products, posing as someone in the market for some money tracts. The woman on the phone recommended that they be used by folding them and putting them on the ground — not as a tip. That’s not all that offensive. Sure someone may get that quick adrenaline rush that you get from found money, but it’s not like they were owed that money to begin with.

When I called Living Waters, another Christian supply site, their operator expressly told me not to use one as a tip by itself, and even if you did leave it with a tip, she said, you’d want to place it “with a really good tip,” a point she’s sure to emphasize. It’s hard to get pissed at that: If I’m expecting a 20 percent tip and someone left me 30 percent and a religious pamphlet, I’d still be happy about the tip I got even if I chuck the brochure. A cousin of mine, who used to be a waitress in Colorado, concurs: “While I’ve been left some religious pamphlets instead of a tip and it pissed me off, if they’d been left with a good tip, all I would have thought was that they were some nice religious folks.”

Next, I called Tract Planet, and this time, I decided to pose as an angry server who’d got one of their products as a tip. Since their phone’s menu system starts with an option to reach either an operator or the owner of the company, I figured, “Hell, I’m taking my complaint right to the top!” so I pressed the button for the owner. When I told him my (bullshit, but at least based on multiple real life events) story, he seemed genuinely bothered by it. He called this behavior “shameful” and confirmed that these are never what they were intended for. Feeling suddenly guilty about my lie, I quickly got off the phone and told him it was okay.

But it didn’t stop there. Hours later, the guy texted me out of nowhere and asked, “This is Andy with Gospel Tract Planet. Was this the gentleman that called about receiving a tract instead of a tip?” I said yes, and then he wrote back, saying, “A friend of mine and I were talking, and we’d like to send you something if you’d let us. Giving a tract instead of a tip is just wrong. We want to bless you.”

I was nothing short of touched: Here I was making up this whole thing and this guy was still worried about it hours later. I thanked him for his concern, and of course, refused the money — if there is such a place as hell, I figured accepting that money would pretty much guarantee me a place there.

While most of my characteristic anger was melted away by this overt kindness, I tried to focus my energy in one last direction: the people handing out these things. I found a handful of videos online of people talking about them and sharing their favorites, but they were all advocating giving them out to people on the street, like during a parade, for example. Sure, there’s a bit of momentary deception there — in that you think it’s money at first — but no one I found was advocating leaving them in place of a tip (although I doubt anyone would even admit to being this kind of an asshole, even online).

This isn’t to say that everything these money-tract-lovers were advocating was cool with me, though. For example, one guy said he likes to put these tracts in the library, inside of books about other religions, which seems pretty douchey. Then there was this video of a guy pressuring a young Christian to give out these tracts to a stranger, offering him $100 to do it before berating the broke college kid for being motivated by money.

Finally, I reached out to a pastor whose name I found on a Living Waters product review. His review read, “Of all the Bible tracts I have ever used, this is the only one where people say, ‘Wow, thank you.’ I use them and few turn them down. I leave them everywhere. I tell people I see who work in the stores, nursing homes, etc. ‘Hey, thanks a million for all you do!’ and they just love it!” He tells me, “I give them to nursing home staff when we provide church service, saying, ‘Thanks a million for all you do’ and I also give them to strangers, asking, ‘Have you seen these?’ And I leave them in rest stops, and elsewhere, but I do not leave them for tips. I might give them one, with ‘a million thanks’ but I also give them their honorary 15 percent tip. To use them in place of a tip is the wrong use.”

Once again, it seems that most people utilizing this fake cash simply do so because they’re eye-catching and they want to try to save people’s souls or whatever. It’s annoying, but still well-meaning, and I was quite surprised by the abundance of kindness I found on what I anticipated to be a rather angry crusade.

That said, if someone does leave these as a tip, they’re not well-meaning: They’re assholes, and they deserve some sort of retribution for their actions. Perhaps not eternal damnation or anything, but you could argue that at least a short layover at the gates of Hell is in order. Or as my cousin the waitress puts it, “I remember when I got those pamphlets. I thought — no matter your belief system — it’s not a very Christian thing to do. And perhaps when they get to pearly gates, God’s going to be like, ‘So I saw that you left this as a tip…’”