The Messy Politics of Men Cleaning Their Room

Don't let grifters like Jordan Peterson appropriate basic housekeeping. It's not even clear he's done any

Women are literally expected to do all the chores. Women still do more chores at home than men. Women’s unpaid work is the backbone of the American economy. Wherever gender parity is to be found, it’s definitely lacking in the arena of domestic labor. And yet the advice to “clean your room” is now mainly attributed to a very weird man.

Are men cleaning their rooms now, thanks to hard affection from their anti-chaos YouTube daddy? Either that or they’re doing it for the clicks. Early this month, a number of geek sites reported that a Twitch streamer with the handle “Jaegerrmeister” had live-broadcast his efforts to tidy up a bedroom he hadn’t bothered to maintain for some 15 years. Allegedly. Redditors picked apart the footage soon after: “Rubbish in bags. Bags are clean. No liquid spills in bags. Bags not deflated, despite years passing. Mess looks staged,” one wrote. Another debunked the concept with simple fact-checking: “I did some math (he’s 20 years old) and asked him if he moved in it when he was 4 years old and his mod just said it was an exaggeration to make it even more hyped than it already was.”

So here we are: Dudes are throwing out fake rubbish for internet clout.

Jaegerrmeister played his part well at times, unearthing what looked like rotted macaroni and cheese, but stretched credulity at others, as when he revealed garbage bags full of urine. (C’mon, everyone knows you store piss in jars!) When the extent of his fiction becomes clear, you can’t ignore it: “That’s about a two meters deep of trash,” he announces of one pile. “There it is, boys.” What is this if not the next stage of pimple-popper videos, those close-ups of hygienic restoration gross enough that you can’t look away? Footage of clean surfaces will never be entertaining. Footage of a room being discovered under a layer of nauseating filth: That’s where the action is.

Jordan Peterson, the Canadian psychologist who has made a pretty penny laundering the reactionary views of the far right as self-help maxims, bears a significant responsibility for the fact that a gamer is now able to monetize basic housework. I read his bestselling book, 12 Rules for Life, last summer, and I can tell you that it is dreadfully boring patchwork of common-sense self-actualization and archaic Christian misogyny. One of his rules, “set your house in perfect order before you criticize the world” — an even more generic version of the “you critique society, and yet you participate in it” fallacy — has often been translated as “clean your room.” The fanboys call this reductive, but Peterson has put the concept in those exact words himself, as you’ll see in the video above. By recalibrating your “local landscape,” he says, you begin to take “control” and can “orient” yourself, figuring out what you actually stand for.

Not that he’s done this himself, mind you.

Seven years before 12 Rules for Life saw the light of day, Japanese author Marie Kondo published The Life-Changing Magic of Tidying Up, a guide to organization that became a global phenomenon and eventually a Netflix series. Kondo’s philosophy faced a backlash, too, with detractors claiming she wants you to simply junk the majority of your possessions for an austere, minimalist lifestyle. But however you feel about her approach, it’s instructive to compare it to Peterson’s. Informed, she says, by the Shinto religion, the “KonMari method” assumes the divine spirit of objects, a living energy in all things that should be respected and cultivated. Peterson, however, has a colonial approach to living space. Because his theories are tied up in dominance hierarchies, he exhorts you to subjugate and tame your bedroom. Kondo values the meaning of a visually harmonious home that reflects the inhabitant’s identity; Peterson argues you ought to wipe the slate clean and then locate meaning in the bare, uncluttered floor. 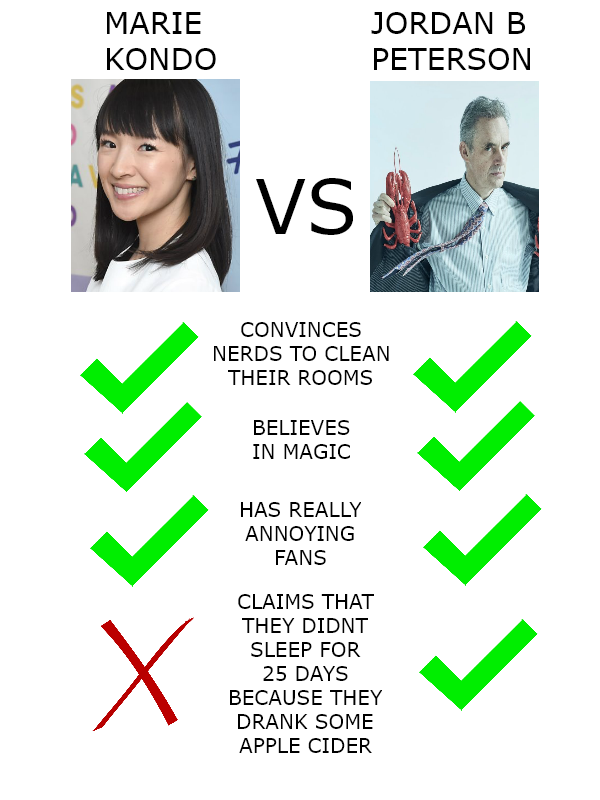 In his backwardness, Peterson stumbles onto the agony of any mother who has begged her messy son to start picking up after himself: Ask the bare minimum of a boy too many times and he begins to expect kudos for doing it. This is what Jaegerrmeister received for appearing to purge his bedroom of cardboard boxes apparently placed there for the stagecraft of removal. Next he’ll want upvotes for brushing his teeth. And maybe, if you’ve lived with a man, you’ve had him nudge you to acknowledge that he did the dishes for once? No, we must forcefully reject the cult of cleanliness in pursuit of approval — from Peterson, a parental figure, an exasperated significant other, even Marie Kondo — and instill it as a virtue in itself. Likewise, we cannot give young men the impression that fussing over their action figure display is key to mastering adulthood.

It’s funny that Peterson can sell a clean room as protection against serving as a “puppet” for someone else’s views, given that prepackaged ideology (and a gateway to further extremism) is what he offers with the ostensibly benign imperative to neaten up your closet and make the bed. He is the very thing he warns against. If you do your housekeeping for him, and not for your personal satisfaction, you automatically expand his zone of influence. Let’s be real: The room is your business, no one else’s, as long as some heinous ooze isn’t leaking into the domicile below and the stench hasn’t permeated the rest of the unit. Choose sanitation for yourself, and please ignore whoever says they came up with the idea. Unless they show up to help, with a mop.