All Fitness Influencers Are Full of Shit

These days, every buff, beautiful person on Instagram is trying to sell you something. But buyer beware.

Whenever I log on to Instagram, my heart drops a little. After years of living the lifestyle and covering the subject, fitness influencer behavior shouldn’t bother me. But it does all the same, whether they’re pitching kratom, CBD oil, the “carnivore” diet, “vegan bodybuilding” or some other purported panacea. It wasn’t always like this — once upon a time, fitness influence was safely confined to the pages of dog-eared Joe Weider and Bob Hoffman muscle magazines.

So how did we get from there to here, into a brave world in which every buff, beautiful person is trying to sell you something?

“First of all, everything on social media is a kind of advertising for the self,” says business analyst Ben Labe, who late last year I spoke to about fitness influencers inflating their value by using fake weights. “But I think for you, and likely for other people for whom fitness was at least some kind of avocation, the increased visibility of all these influencers — the idea that they’re all profiting in some way from something you liked enough to do for free is especially upsetting.” 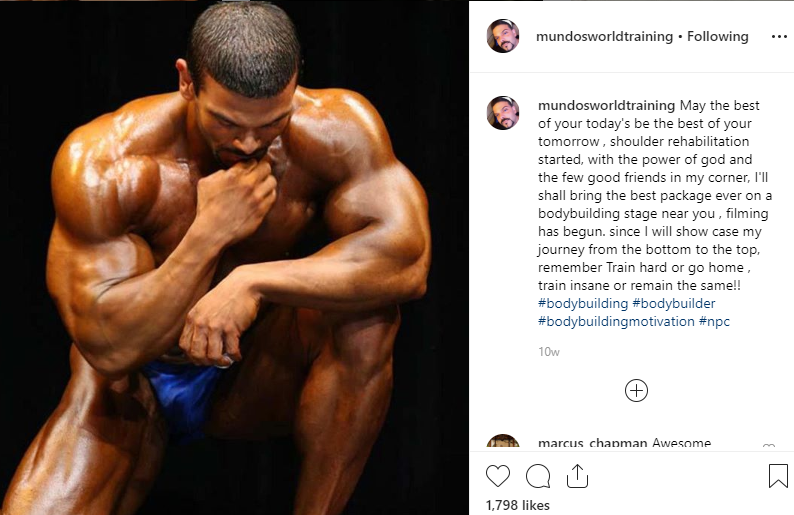 Over the years, I’ve read and even been interviewed for articles about how fitness selfies and Instagram were helping athletes of all kinds come to terms with their embodiment, empowering them to overcome anxiety and various other issues. The fulsome captions often accompanying these influencers’ thirst traps, which go to absurd lengths to describe how building stronger calves and using a sponsor’s CBD oil can be a way of overcoming a truly debilitating condition like PTSD, suggest this is how they want to position themselves, too. “All that gibberish is aspirational, of course,” says Labe. “But it’s like those motivational posters people hang in offices — from a marketing perspective, many potential customers find it appealing. Positivity sells.”

“Sponsored athletes on Instagram and YouTube are paid advertisers marketing specific products, plain and simple,” says RedCon1 CEO Aaron Singerman. “I sponsor athletes because these sponsorships can increase the visibility of my products. And Instagram has expanded the pool of people who follow fitness-related trends, even if their interest happens to be casual and they just want to see big arms and chests instead of reading about sophisticated workout plans or the other detailed information that would pass from user to user on the old bodybuilding forums.”

“The medium shapes the message,” says fitness journalist Anthony Roberts, who gained notoriety as an expert on the bodybuilding forums Singerman is referring to. “There was a hierarchy on the old message board and chat groups. You join, and you’re at the bottom, all alone. You don’t have a ready supply of defenders from day one. You can’t block anyone. You can’t delete posts. You can’t silence critics. All you’ve got is what you can convey through posting.”

By contrast, Roberts explains, “a well-built guy can come along on Instagram and post photos of himself and adopt the position that he’s an expert. That wouldn’t have worked on the message boards, but it can and does on Instagram. You just have to constantly solicit for more followers. More attention. The more followers someone has, the more diluted the pool of expertise in their threads will become. The most exclusive anabolic steroid websites have less than 200 members. You get invited after the members take a unanimous vote to let you in. But these social media platforms can just keep growing.”

Adam Prato, an engineer in New York, has recently begun focusing heavily on his physical fitness. His journey led him through many fitness influencers. “I suppose I became irritated and annoyed, as anyone would be after discovering so many snake oil salesman and charlatans. But I was level-headed in my pursuit, not taken in by their aspirational nonsense or their one-size-fits-all approach to fitness advice: ‘Here’s this one exercise or supplement that will burn belly fat!’ Given my analytic nature, I’ve gravitated toward producers of practical fitness content, like Shredded Sports Science, AthleanX and a few others.”

“With the most popular fitness influencers, like with any influencer these days, there’s very little interactivity,” adds Singerman. “Back in the old days, you could talk to pro bodybuilders right on the forums. But it’s different with influencers because their mentions get overwhelmed. Their feeds become more like mirrors, just reflecting their own lifestyles back at them. You can follow along, but most influencers don’t have the capacity or time to respond to comments with meaningful advice, if they respond at all. And the fans often don’t want to read long, detailed captions about sports science or exercise, so the influencers will post more appealing and perhaps less cerebral content.”

In a revealing Motherboard profile of extremely thirsty, follower-obsessed fitness influencer and ex-University of South Florida football player Ryan Hintze, Hintze confessed he had no interest whatsoever in the social media he used. “I don’t even use social media,” he told writer Luke O’Neil. “I’m just putting content out there. The end goal for me is to be on as many screens as I can. It’s nothing personal. Since 2015, I’ve gained around 230,000 followers.”

A fitness influencer who spoke to me under the promise of anonymity echoes Hintze’s sentiments. “Look, this is a business, and I punch in and punch out each time I send a picture,” he says. “Early on, it was a hobby. I was a powerlifter, and I got interested in steroids. But now I’m very much tied to engagement and views because that determines how much I can charge for placed ads and sponsorships. What I write is basically marketing copy. I’m pushing product at you. Do I think the stuff I push works? Some of it does, sure. But what really works is testosterone replacement therapy. That works like a charm. But I’m not sponsored by a ‘low T’ center or something like that. It’s kratom and CBD oil, that’s my bread and butter. I can’t think too much about it. You don’t get a 401k with this kind of career. It’s front-loaded, and I have to earn all I can right now. I need to make this native advertising work, and the more it works, the more I work.”

This influencer, who also runs several popular YouTube channels, acknowledges that money now shapes his behavior in a way that it never had before. “You want me to say I’m influencing all these people,” he says. “But I’m the one who is really influenced by this. The way I act online is shaped by monetary incentives. If a post does well, expect to see more posts like that. If copying and pasting motivational quotes from Dale Carnegie drives engagement, I will share them all day long. I don’t care. I started lifting weights because I loved steroids and pharmaceutical drugs, but these days steroids serve mainly as my Instagram costume. I have to put my steroid costume on before I go on camera. I don’t talk about steroids in my posts much anymore, though I did before, because I’m working the CBD oil crowd. I don’t want to distract the followers by talking steroids. I’m not lying, I’m not deceiving them, like people who pretend their gains are ‘100 percent vegan and natty’ or some bullshit like that. But the same way the stories you write will be shaped by what you can sell, whatever I post is in line with what’s making me money. It is what it is. I keep my head down, do my job, and stay professional.”

Labe believes this point is essential to understanding and dealing with influencers. “Imagine this: You’re following the stage-managed lives of human advertisements,” he says. “They’re a combination of advertisements for themselves and for whoever is paying their bills. And because they’re humanized, by which I mean actually human — ‘they’re just like us,’ as that old tabloid feature about celebrities buying groceries would say — you might fall for their sales pitch. And maybe it’s not all sales pitch. Maybe smart content is mixed in with that sometimes. But that confuses things even more. I’m not sure everybody, even you or me, is always prepared to process so much complexity. It goes beyond the fake weights, because everything about the world of these influencers is up for grabs, the truth is shifting, ‘all that is solid melts into air.’”

My fitness influencer friend, however, remains skeptical of such airy speculation. “What even is a ‘fitness influencer’? You talk about it like it’s this easy to define category. But who is in it? Some skinny male model? A woman who does squats in yoga pants? Some big fat powerlifter? What they all have in common is that they realize they can become persuaders and salesmen, and the selling is tied to their brand. They behave like a brand. You manage invoicing like a real company if the cashflow gets high enough. You trademark stuff. You build a business. The USA was founded on that principle, selling and being sold. If you grow up here, you grew up deep in sales lingo.”

“Who even are my followers? Who cares,” he continues. “I try to be nice to them, post nice replies when I can. I think of it as giving back. What matters is they believe, and I believe they believe because I see it’s working for me. But in terms of learning from fitness people on social media, I don’t think it matters. It’s all infotainment, advertorializing, whatever. And again, I’m the one being influenced, not them, because I’m a businessman who is influenced by business trends. I suffer the most from this the way any working stiff does.”

Meanwhile, veteran bodybuilder Vanessa Adams, a fitness insider from the pre-Instagram era, is very candid about selling absolutely nothing and carefully tags many of her Instagram posts with #NotAnInfluencer. For her, the whole swole and nothing but the swole remains the goal — no matter the spoils she could earn showing off that swole on Instagram. “I believe in truth in advertising,” she says. “No one on social media is really there to motivate or inspire anyone. If you are, you have a very high opinion of yourself. And if you need to be motivated, influenced or inspired by looking at another person’s pictures, that’s kind of fucked up, too. These influencers’ lives are just product placements. I may not be a professional athlete, but I have a few accomplishments under my belt. These influencers, other than being thinner or more shapely than the general population, which is hardly an amazing physical feat, what have they done? What have they won?”