In Defense of Pierre Delecto

Like, I’m sure he’s a nice Pee-Paw to his 2,000 grandchildren and what have you, but as a force in American politics, he has roughly the impact that a glass of milk would have on a wildfire. Early this month, the senator again floated his “adult in the room” image with a couple of tweets lightly admonishing Trump for high crimes and misdemeanors, content to do nothing else about them. But that online display of empty defiance had already been forgotten by the time Slate’s Ashley Feinberg, drawing on clues from an Atlantic profile of Romney, found his second, secret Twitter account, which pairs the rather unassuming handle @qaws9876 with the flourish of an upscale nom de plume: Pierre Delecto. Romney soon confirmed that he was indeed Pierre. 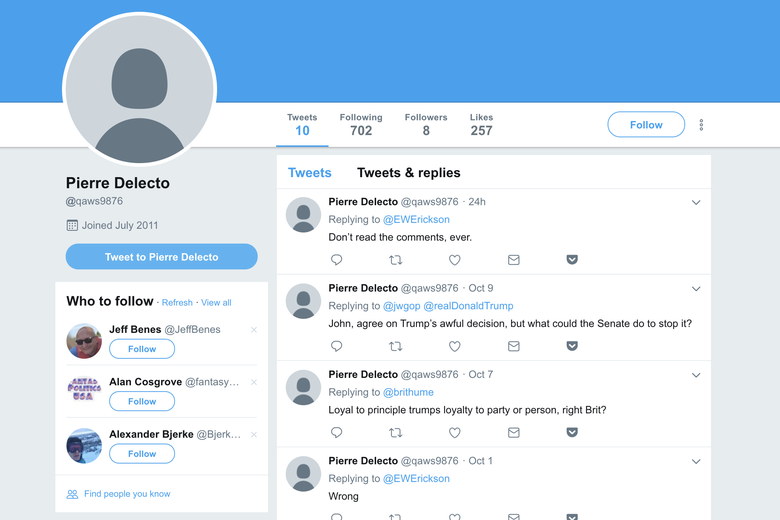 Feinberg found that Mr. Delecto mainly liked tweets that were favorable to Romney, in addition to Romneyish critiques of Romney’s foes, including Donald Trump. A handful of times, though, he stood up to Romney-bashers with a note of distinct petulance — trying, for all the world, to sound like a non-Mitt Romney guy who spends a lot of time thinking about how the media is very unfair to Mitt Romney. That premise alone “strains credulity,” as Romney might say, but it’s also oddly humanizing in its dweebiness — even more so if you pick apart the pseudonym.

Well, I’m not here to defend Mitt Romney — who, to reiterate, profoundly sucks. I would, however, like to defend Pierre Delecto, by which I suppose I mean Romney’s decision to be his more authentic, sucky self in the guise of a lurker. It’s nothing like the PR grift of Trump making up a fictional spokesman, “John Barron,” to misrepresent his wealth and success to the media, and it lacks the sleaze of disgraced former congressman Anthony Weiner using the alias “Carlos Danger” to sext young women, or soon-to-be-disgraced NFL quarterback Michael Vick allegedly identifying as “Ron Mexico” in a scheme to avoid news reports that he had a sexually transmitted disease. It’s far closer to former FBI Director James Comey flying under the radar as “Reinhold Niebuhr,” a favorite theologian, to follow dullards like David Brooks and like pro-Comey posts. And in his cattier moments, Pierre Delecto has the tenor of something the NBA’s Kevin Durant would say, from a burner account, to anyone talking shit on Kevin Durant.

This sort of internet presence might deserve the label “finsta,” which is slang for a fake Instagram page where content need not meet the curational criteria for stuff on your main account. In the case of a major politician like Romney or sports star like Durant, it allows us to see which needling comments get under the person’s skin, and the sort of perspective they wish they could openly express. That it forces them to get down into the muck of replies with the rest of us grubby peasants, in a hopeless attempt to steer the narrative without the benefit of their fame, is magical. Mitt Romney trying to score points against Soledad O’Brien as a faceless nobody goes to show that he’s wracked by an embarrassment that prevents him from speaking his feeble objections directly. Of course ham-faced political washout Mike Huckabee slammed the Pierre Delecto ruse, because he can’t even muster the shame to avoid tweeting, under his actual title and name, every god-awful boomer “joke” that flits into his squishy head.

Folks, you love to see it. And you love to know that sooner or later, Romney will open a new Pierre-style account, this time reminding himself not to carelessly give some journalist the means to track it down. He’ll disappear into the fog of anonymous normies, the wealthy prince disguised as a moderate Republican pauper, to continue saying what Romney, apparently, cannot. Thank god, because Pierre Delecto is Romney’s best incarnation: someone killing his precious time on a social network that saps your common sense, and petty enough to do so by trying to stir up beef with his haters. He’s never going to announce that he’s become a communist bent on overthrowing the government, but he can log on and register complaints that are guaranteed to be ignored, if they’re seen at all. This is perhaps the only way he can gain something like insight into the average, beleaguered voter, a person whose opinions are totally irrelevant, mere junk in the landfill of discourse. Nowhere else is he this small and sensitive.

Really, wouldn’t we all benefit from an alter ego like Pierre? Just to feel there’s at least one person on our side, and to compartmentalize the fear that we’re as weak and ineffectual as some say we are? To escape our own weird name and create an even weirder alternative? Romney gets a lot wrong, but the Twitter account of Pierre Delecto is incredibly right. It’s pure. It works.

Go ahead and laugh at the guy — I know I am — but admit it: You like him a tiny bit more now.