We Are the Sword Guys. This Is Our Tale of Woe.

When you were partying, I studied the blade — and I refuse to be ashamed of it

Typically, Grandma Ruthie knocked it out of the park with her birthday gifts. She was the savvy city-dweller, a retired professor who watched South Park and surrounded herself with books about world religion and languages. So when a long, heavy box arrived on my 17th birthday, I figured it was something sick.

It was a sword. A huge, gaudy blade, straight out of a fantasy book. It was the type you’d find on infomercials at 1 a.m., about eight pounds and made of steel, with a hilariously ornate hilt. 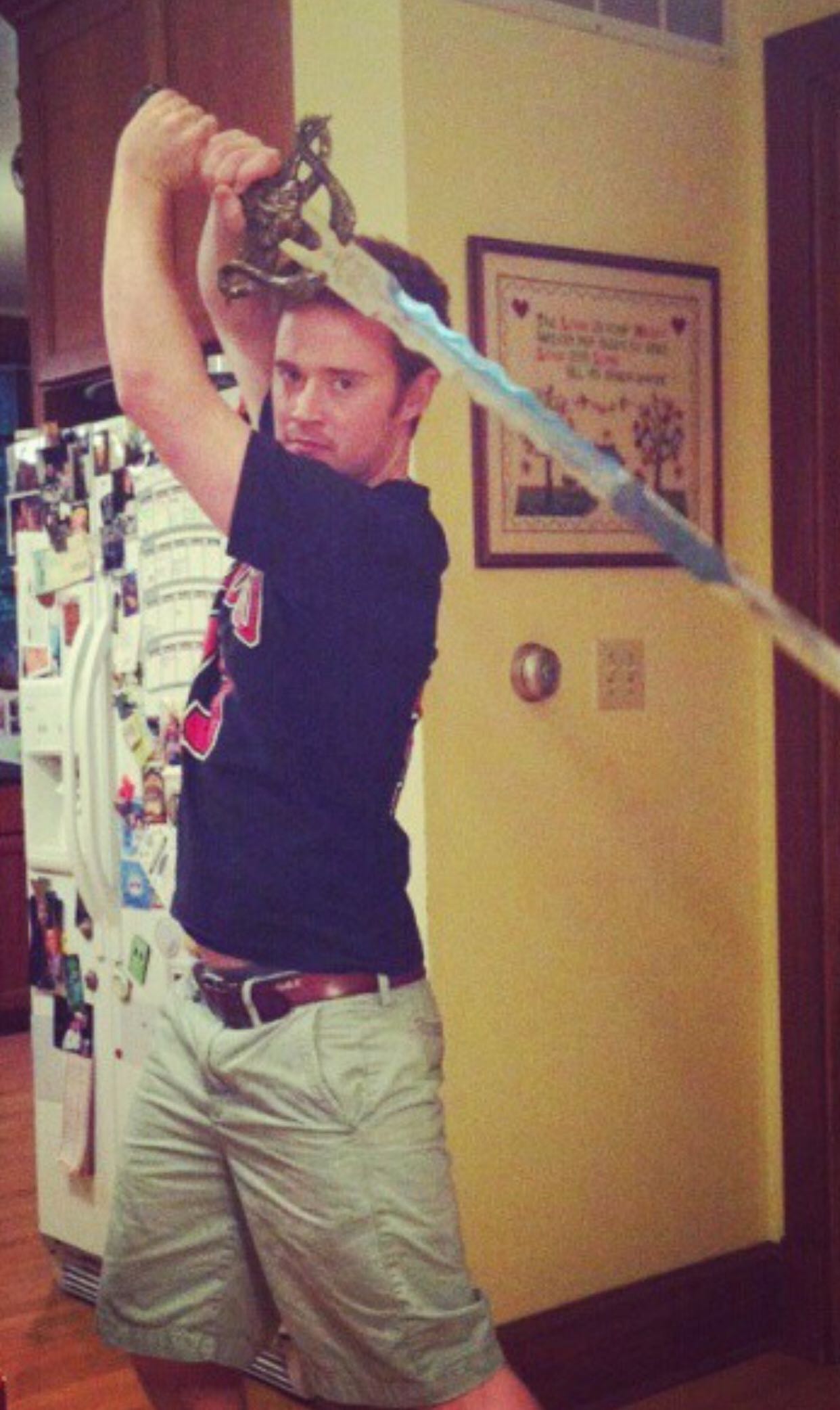 Maybe Grandma was getting older and more susceptible to scammy marketing, I thought. No matter what, I hated it. Even back in 2008, a sword carried the same connotation it does now, and I feared people would find out I owned one and think I was a Dungeons & Dragons–playing, card-carrying virgin.

I stowed it away so my peers would never know.

And then, in college, I discovered irony was the ultimate weapon against embarrassment. Having a giant sword in my apartment proved to be a memorable gag at parties. Before long, every time I changed apartments, I brought the sword with me. I was growing kind of attached to it. It made for some great content.

In Chicago, I’d tell people who spotted my sword in the corner that I used it in lieu of a gun or baseball bat in case of a break-in. In truth, I never considered the thought.

But then, in 2017, a Game of Thrones fan named Mac Dolan, who lived two blocks away from me in Wicker Park, woke up to find a burglar had broken into his apartment and begun assaulting a female friend who was sleeping on the couch.

He grabbed his own “joke sword” that was hanging on the wall — a $100, 10-pound piece purchased from Medieval Times — and swung it at the attacker, Francisco Chavez. The burglar ran out of the apartment, leaving his wallet behind.

For a month, everyone talked about Dolan’s duel. He ordered a second blade, a $200 Japanese katana. Chicago cops referred to him as “the sword guy.” And I never looked at my sword the same.

Even in a time when nerd culture is considered cool and 17 million people watch Game of Thrones every week, people still look down at men who love swords. They’re seen as virgin white-knight neckbeards, perhaps just as obsessed with violence but not man enough to own a gun.

But I am a sword guy now. I say that with neither shame nor irony.

I will protect m’lady with this big honkin’ fuckin’ thing. Or this smaller one. I also have a family sword from the Civil War (similar to this) at my parents’ house, an item I’m very proud of. I love the idea of inheriting it, like the great broadswords made of Valyrian steel passed down from generation to generation on Game of Thrones.

My fiancée says she’s happy the sword lives with us, even though she argues it’s “not necessarily better than a baseball bat.” She thinks I’m more prone to actually injuring myself, not the intruder, with the sword, and she’s not wrong.

Still, she’s convinced herself that I am not, in fact, a “sword guy” — and this is good for our relationship. “You have the swords as gifts,” she reminds me. “You didn’t actually buy them for protection, so don’t get it twisted. You’re not really a sword guy, because you never use them.” Sounds like a challenge!

So it’s time to unsheathe my steel and slice away the shame. I spoke to a few other bona fide sword guys about how they grew up studying the blade while you were out partying — and what the sword means to a new generation of men raised on geek culture and masculinity in crisis.

I’ve got two swords, which from my understanding look like Turkish Cavalry swords. One of them is sharpened a little and the other isn’t. Both are used for display, but in case someone breaks in, I’d be willing to use one or both for defense.

I used to have four or five other replica display swords, but I ended up getting rid of them once I moved into a smaller place. I kept my quality ones. Nobody has ever broken into my home and I hope that nobody ever does.

My first course of action in the event of a break-in would be to call the police, of course, but if it came down to having to defend myself against an attacker in my home, I would not hesitate to use one of my swords.

That said, I would most likely use my old scaffolding hammer that I keep under my bed with all my other work gear… or, if I had enough time, I’d probably string my bow just in case.

On another note, I like to pick up hitchhikers whenever I have time and I see them. I’ve never had trouble with a hitchhiker, but I’ve picked up weird ones. I keep a large knife, about six or seven inches, which my buddy made with his home forge, under the seat of my car in case something goes wrong one day when I pick up a hitchhiker.

Overall, I don’t live my life in fear of break-ins or crazy hitchhikers, and 90 percent of the reason why is that I have these items. Even if they’re for display (swords), hunting/recreation (bow), or practical use (knife).

I’ve got fewer than 10 swords, all tied to my study of the martial arts. None are particularly flashy, but I’ve got three that are points of pride: One is a bokken that I’ve had since shortly after I started getting serious about martial arts.

I’ve broken two others in the intervening years, but the first one has held up against all odds. The second is a custom steel Iaitō that I had built to measure by a friend, patterned after one that I’d bought from the Paul Chen/Hanwei before the forge burned.

It’s sized to my body, much the way that a made-to-measure suit would be. That one has a wrought-iron hilt that’s been worn to a shine by hundreds of hours of practice.

The third is a full-weight podao; a Chinese pole-arm that’s silly-impractical but loads of fun to practice with.

But all my swords are training equipment; they’re a means to an end in the same way that a bodybuilder might own weights but not be a collector of barbells. In other words, they’re as much exercise equipment as they are anything else. The swords themselves are not usually on display, but I do I find that visitors, kids in particular, get preoccupied by them.

But since I’m in Canada, the most likely scenario here would be some poor drunk neighbor; I’d be far more likely to feed them a coffee and get them home safe than pick up one of my swords against them.

They’re neither decoration nor for collections — they’re tools. I think that’s why sword guys get a bad rap. It’s a symptom, not the cause. A sword that hangs on a wall and doesn’t get used is like a dusty exercise bike sitting in the corner of an apartment. Swords are cool, but they’re cool because of what you can learn to do with them.

I have a metal katana that stands right next to my bed. Although I’ve never had to use it, in my mind I imagine myself smacking a burglar with it like a baseball bat, not using it in its proper form; but in reality it probably wouldn’t be that effective.

But I’m just a guy who owns a sword. I wouldn’t call myself a “sword guy.” In my experience, most “sword guys” usually have eastern swords rather than European straight swords.

And for that reason, I usually don’t ever bring my sword up in conversation for fear of looking weird. “Sword guys,” in my mind, are kind of “nerdy” or “weebish,” meaning weeaboo, which is someone — typically American — who is obsessed with Japanese culture. And that usually comes with collecting katanas and other Japanese weaponry.

I came in possession of the katana back in 2007. I was in middle school and my sister’s ex-boyfriend had a lot of swords and stuff like that. One day I guess he was trying to impress her and gave me a katana as a present. I remember being happy. It’s been 12 years since, and I still carry it with me because it kind of reminds me of simpler times.

And if by any chance someone wants to break in, I will use it. I don’t care.

In a way, it has kind of become part of my identity: None of my friends or people that I know have one. When people come to my place and see it, they always want to see or touch or use it.

That said, it’s more of a decoration and it’s not as sharp as it used to be, especially after a few rounds of “real-life Fruit Ninja.” One time a friend of mine came to my place and started throwing apples and bananas while I sliced at them using the katana. But as soon as I cut the banana, I left a hole in the ceiling and stopped. My mom found out, but she didn’t get angry, just kind of rolled her eyes.

The next time we did it was when I was 21, and a couple of friends came to my place with beer cans and other stuff. We were waiting for a ride to take us to the beach, and we started throwing the beer cans and taking turns cutting the cans. Don’t mix alcohol and sword. Nothing bad happened, but I trashed the place and had a lot to clean up later.

I have always been fascinated with blacksmithing, and I finally bought Longclaw [Jon Snow’s sword on Game of Thrones] a month ago. I’m more interested in the scientific aspects of blacksmithing, but I love [the Game of Thrones book series] A Song of Ice and Fire and decided to buy the sword. Mind you, I’ve never forged anything myself, I’m just interested in learning about it.

Personally, I would only refer to someone as a sword guy if they have more than two — for example, Skallagrim on YouTube. He is a genuine enthusiast on every level.

Having just one sword, I don’t consider myself a “sword guy,” but someone’s overeagerness to show off a ridiculous amount of them would certainly be strange. Someone who gets one as a novelty item or display piece, on the other hand? It would just be their hobby or a symbol of something they’re interested in. Can’t imagine that someone like that would be judged unfairly, as it would be no different from someone collecting guitars, watches or even action figures.

Still, the idea of home defense with a sword would certainly be interesting. After all, it is technically a weapon. Naturally it would depend on if it’s a sharpened blade or just a decorative piece, the quality of the steel, whether or not it was properly tempered, etc.

Regardless, if a sword were to be used in that capacity, stabbing with it would be the most efficient way to use one.