Old people could be making so much money rn.

I don’t particularly like driving, but I do a lot of it — I live in Los Angeles, after all — and I think I’m pretty good at it. I must be, because besides being on the receiving end of only two traffic tickets in the nearly 20 years I’ve spent behind the wheel, the sole fender-bender I’ve been in happened about a month after I got my license — and then only because a spider rappelled down from my sunroof and into my lap. You try not rear-ending the car in front of you when a vicious eight-legged fiend attempts to turn you into a meal.

My bona fides have, for a long time, been all the reassurance I’ve needed to know that, as far as I know, I’m a safe, responsible driver. Unlike when I was, say, 16, I don’t speed, much, I try to change lanes one at a time and I avoid taking any unnecessary risks.

So color me a bit surprised when, right after braking a bit harder than usual recently on the I-10/I-110 interchange amid a cross-town jaunt to get some dim sum with my girlfriend, she alerted me that my driving makes her nervous.

I’ll admit it: her admission made me mad. First of all, missy, I’ll have you know that I am, in fact, a very safe driver (look at my driving record!), and duh, that guy I just braked hard for came out of practically nowhere! I’m not a bad driver, he’s a bad driver! Second of all, have you seen the way you drive? Why do you speed, only to slam on the brakes moments later? Like, have you ever heard of coasting?! Who are YOU to complain about MY driving?!?!

Needless to say, it was an irrational response, and one I felt bad about almost immediately afterwards. Trying to dismiss what was clearly a real feeling she was having simply because, “But, but, you don’t drive good, either!” was a bush-league move. Yeah, I was probably going a little too fast around that interchange, and I wouldn’t have needed to brake had I given the wildcat in front of me a bit more room.

Perhaps I’m not the safe, responsible driver I thought I was? And maybe the lack of any serious driving mishaps belies an overconfidence bordering on arrogance behind the wheel?

To answer these existential questions, what I needed was an objective third party; a tool that could both settle, once and for all, whether I was as good a driver as I hoped, and if not, could help me become as safe and trustworthy as those people with the “baby on board” stickers on their car.

So when my esteemed colleague Miles Klee mentioned that the city of L.A. has an app that would both grade my driving habits and, naturally, pay me cash money if my skills were of a certain lofty quality, I leapt at the opportunity to download it and see if I might become a better driver.

The Problem: My girlfriend thinks I’m a shit driver (thanks, babe!).

The Alleged Cure-All: The L.A.’s Safest Driver app, built by the city of Los Angeles in partnership with financial services group USAA and Cambridge Mobile Telematics, designers of the underlying driver-safety technology.

The app works by using your phone’s internal gyroscope, accelerometer and GPS data to determine your driving route, and whether you’re speeding, braking, cornering and/or using your phone in an unsafe manner while doing any of the above. It then uses that data to assign points to each and every “trip” you take — to work, to the grocery store, to get ice cream around the corner. Afterwards your points are tallied and your trip is given a final score between 0 and 100, 0 being “take his license away immediately” and 100 being a perfect score.

Scores are then compared with those of other drivers on public leaderboards, and then app users with the highest scores over a two-week period in their respective categories (safest overall driver, least distracted driver, safest military/veteran driver, safest youth driver and safest commercial driver) are paid out a cash prize up to $20,000. So there’s a lot of incentive to drive well!

L.A.’s Safest Driver is an app and contest limited to the city of Los Angeles, but there are a number of apps anyone in the U.S. can download to help monitor and improve their driving — you just won’t get paid to do it. If you don’t live in L.A., but this sounds like something you’d want to try, check out other apps like DriveWell (from the same company, Cambridge Mobile Telematics), EverDrive (you can get insurance discounts!) and LifeSaver.

The Science: It doesn’t take Albert Einstein to understand that people who drive the speed limit, avoid situations that require someone to slam on their brakes and don’t play with their smartphone while weaving through traffic are going to get in less accidents. L.A.’s Safest Driver and apps like it simply incentivize users to practice these safe driving habits through friendly competition with other drivers, and yes, in the case of L.A.’s Safest Driver, cash bonuses.

The Experience: Upon downloading the app and getting in my car, I fully expected that, while likely not perfect or even great, my first score would probably land me in the top 20 percent of all users.

My first drive scored me a 61, which, in context, put me in the bottom 40 (!!) percent of all users. I had seven “events” the first day: Four speeding events (any time you go 10 mph over the limit), one “severe” acceleration event (0.4g in 2.8 seconds, which I guess is a lot of g?) and one “hard” braking event (0.4g in 2 seconds). My star rating on the trip was 2 out of 5. It appeared that, even when I thought I was driving safely, I was doing all sorts of things that, according to the powers that be — and the laws of the state of California — were actually unsafe. 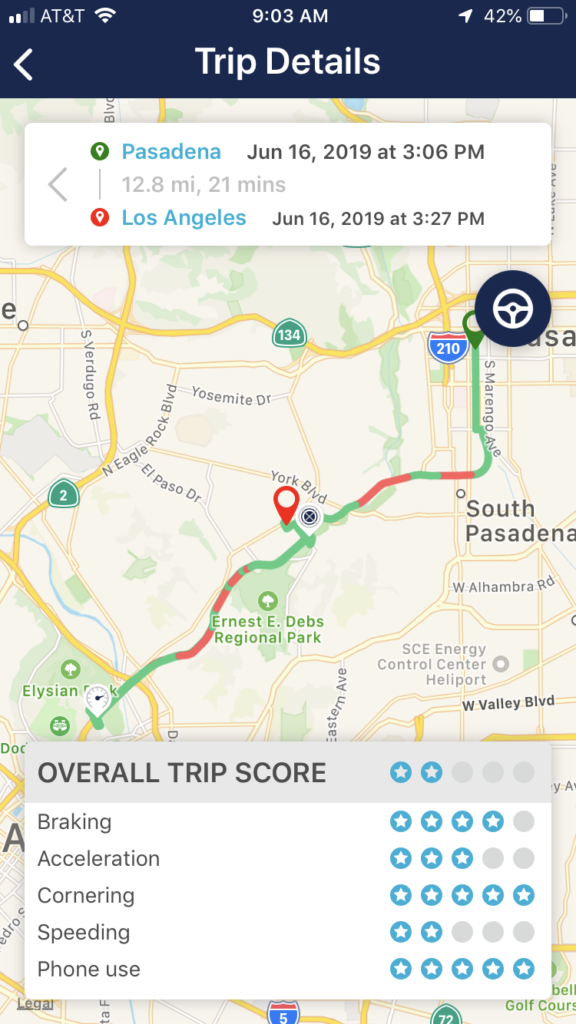 My next drive was even worse: 14 events, including a lot of phone usage and more severe acceleration and braking. These initial drives were my way of setting a baseline of performance, letting the app judge how I’d drive if it wasn’t on and I was simply going about my business, and they were really bad. 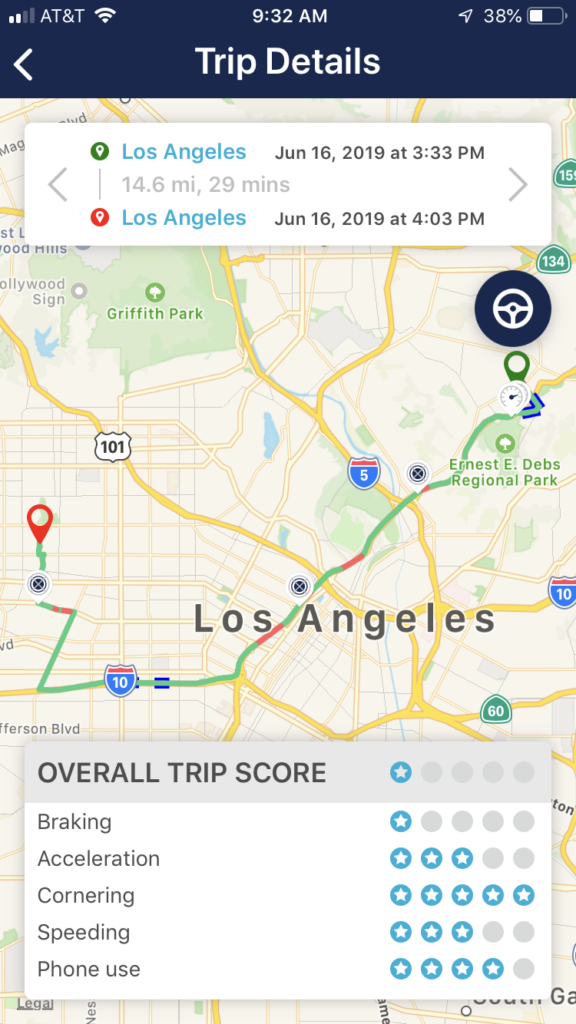 Starting with my third trip, I began driving like I knew the app was watching my every move — I kept to the speed limit as best I could, I gave drivers around me as much room as possible to prevent any sudden braking and I left my phone on its little magnetic holder on my dashboard and tried not to touch it for the length of my rides.

Almost immediately, my scores started improving. By the second week I had gone from a 61 to a 72 — still not great, but better. I noticed quickly that, even if you got five stars out of five on a trip — meaning none of the egregious “events” — there was still some scoring happening in the background that took into account the more subtle mistakes I might’ve been making: Accelerating hard, but not hard enough to register an event, or speeding a little over the limit, but not 10 over — that kind of thing. I was still getting dinged occasionally, maybe one or two events every three trips, mostly for driving a little too fast down a side street, or for braking hard if a driver in my vicinity decided they were going to change lanes without signaling. It was annoying to me that my scores weren’t going up faster, and that I couldn’t pinpoint the culprit as to why.

Numerous times I thought about disqualifying a score when I knew I’d fucked up a trip by marking myself a passenger in someone else’s car, which, when used for its intended purpose, is a smart feature that prevents your score from going down if you’re in an Uber, for example, or riding shotgun with a friend. But, I didn’t.

What’s crazy to me is that, if you check out the leaderboards within the app, there are people with thousands of miles driven and perfect, 100-out-of-100 scores. Are these people cheating? Is there some way to game the system? Or are they simply mistake-free drivers, masters of their domain? I wish I knew. 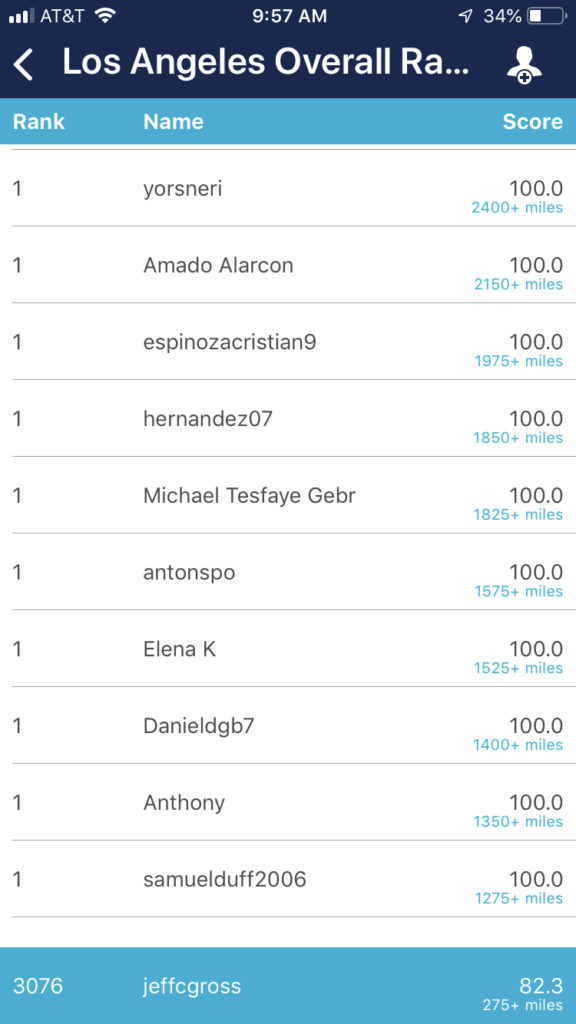 The Takeaway: In the end, the best I could manage was an 82. Not going to lie, I wish I had broken 90. I suspect with additional usage over the coming weeks, I could get there, since my score continues to trend upwards, but I’m not there yet. No, I did not make any money — that’s what happens when an 82 only charts you in the “top 50” percent. Better than bottom 40, sure, but not good enough to earn any dough.

There’s no doubt that, if the measure of one’s driving is the ability to limit the number of times you speed, brake hard, corner too fast or use your phone, then I’ve certainly improved these last two weeks. I might be what the city would describe as a borderline “safe driver.” But, to me, how good a driver you are can’t only be measured this way. It’s possible that someone could score high on the app and still be an unsafe driver, and the inverse as well. After all, we’re at the mercy of the actions of the cars around us; I could be the world’s best driver, but if the truck next to me decides to swerve into my lane, or a person runs out into the middle of the street, I could still find myself in a dangerous situation.

And you also need to take into account how striving to score perfectly might work against you: Like, if I’m not going with the speed of traffic because everyone else is going over the limit and I don’t want to, lest I earn an “event.” Or maybe I swerve into the lane next to me to avoid having to brake hard. What I’m trying to say is, context when driving is important, but something these apps don’t take into account.

That said, I do believe that the app has improved my performance behind the wheel, if only because it’s made me more cognizant of how I’m driving, as opposed to improving my actual skill level. I could see how this might be a worthwhile tool for parents, or for anyone with a lead foot. Will I continue using it, though? Probably not.