I Bought ‘Smart’ Lights to Help Me Wake Up to Work Out, and I Can’t Wait to Get Rid of Them

There aren’t enough hours in the day. That’s what I often tell myself when I decide I’m too tired to go to the gym. Who’s got time to work out when your entire day is spoken for? I wake up, I get ready for work, I drive to work, I work, I drive home from work, I decompress from work and then I go to sleep and do the whole thing over again.

For a long time, I tried to sneak in a workout the moment I arrived home. But I hated it; there’s nothing like putting in nine solid hours at your job only to realize that, sorry, you can’t reward yourself with a little “me” time, or with a delicious meal — instead, you need to expend more energy lifting weights and running on a treadmill to no specific end. Real sorry you’re tired, bro.

I tried morning workouts, too. That was even worse, though. No joke, there were mornings when I felt like I might cry as a result of how little I wanted to go to the gym. Because what I really wanted to do was sleep until the very last second I absolutely had to get up to go to work. For my money at least, there’s literally nothing worse than having to wake up when you’re not ready.

Now, I know my “predicament” doesn’t exactly elicit sympathy. There are people working 14-hour days who still manage to put in two-hour workouts each day — I even know a few. To which I say, good for you! But this is my problem, and more importantly, my column, and I’m sure I’m not alone among those who’d rather wedge punji sticks between their fingernails than carve out an hour at the gym.

But alas, I’ve spilled more than my share of ink on these pages detailing how I know I could stand to lose a few pounds — as well as my reticence to put in more effort than I have to in order to accomplish that goal — and I realize that’s never going to happen if I continue to make excuses as to why I can’t find time in the day to get my heart rate up.

That doesn’t mean, however, that I can’t lifehack my way into getting myself to the gym. After all, if my biggest barrier to waking up in the morning so I can go work out is the fact that I’m sleepy — and the bed is sooo warm and inviting, and I’d rather not get out of the damned thing — maybe there’s a way to trick myself into feeling refreshed and awake enough that I’ll want to go?

That was the idea, anyways, behind purchasing a set of special “smart” lights that you can control with your phone and set to turn on slowly at the time of your choosing to mimic a natural sunrise. Sure, I could have changed my sleep habits, had my girlfriend tell me to go to bed at a more reasonable hour or followed my own damned site’s advice for how to wake up earlier, but those require real work, okay?

Besides, I got to try out some fancy-schmancy gadget lighting that can change basically to any color you can imagine. So you can see where I might want to give smart bulbs a chance, first.

The Problem: I don’t like waking up earlier than I want to.

The Alleged Cure-All: The Philips Hue White and Color Ambiance LED Smart Bulb Kit, i.e., four magical light bulbs you can control with your phone through Bluetooth. If they sound fancy it’s because they are, or at least, that was my assumption when I bought them. Philips Hue lights can produce up to 16 million colors, turn on and off depending on whether you’re home or not and can even act as home security by making it look like you’re home when you’re actually on vacation. Besides that, you can connect your Hues to third-party apps to do things like play different colors along with your music or create a home-cinema experience where your lights match what’s happening on screen. 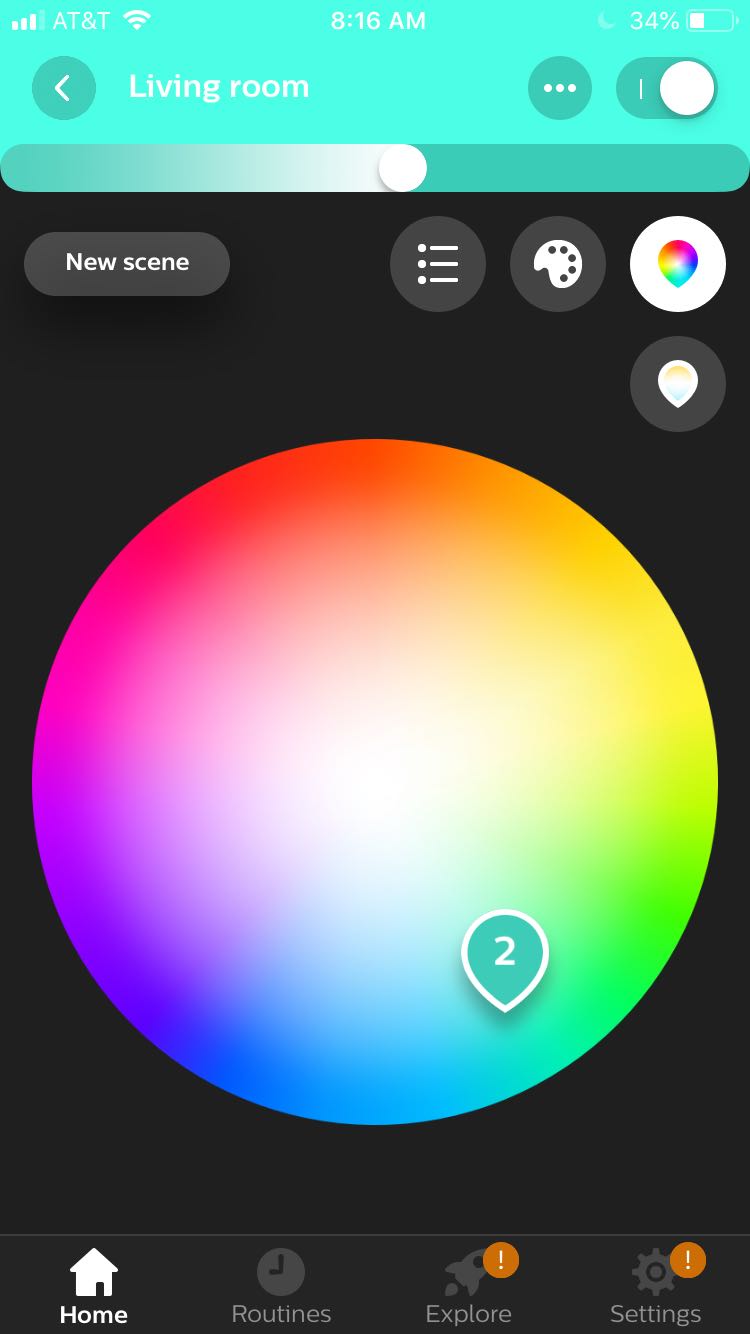 Of course, that’s not what I was using them for. I simply wanted to take advantage of their “routine” abilities, or different programmable automations to make them behave in a certain way. The routine I was most excited for was the “Wake-Up” automation, which, when set, would turn my bedroom lights on slowly, over the course of 30 minutes, reaching peak intensity at a time of my choosing, and hopefully waking my ass up. You know, like my own personal sunrise in an otherwise dark room.

Oh, be careful what you wish for.

The Science: The human brain needs a lot of sleep to function. I’m sure I’m not telling you anything you don’t already know, but what you may not be aware of is that the sleep we need, and then get, is governed by our circadian rhythms — a built-in, 24-hour sleep/wake cycle tied to the rising and setting of the sun that’s evolved to allow us to better take advantage of our daylight hours. Cavemen who could wake naturally with the sun, it’s believed, had a leg up from a survival standpoint over their fellow hunter-gatherers.

This is more or less the basic idea behind the Hue’s Wake-Up routine, and any other alarm clock/light set-up where the lights begin turning on, slowly, to reflect the sunrise. By artificially triggering your natural circadian clock, you wake up feeling more refreshed and ready to start your day. 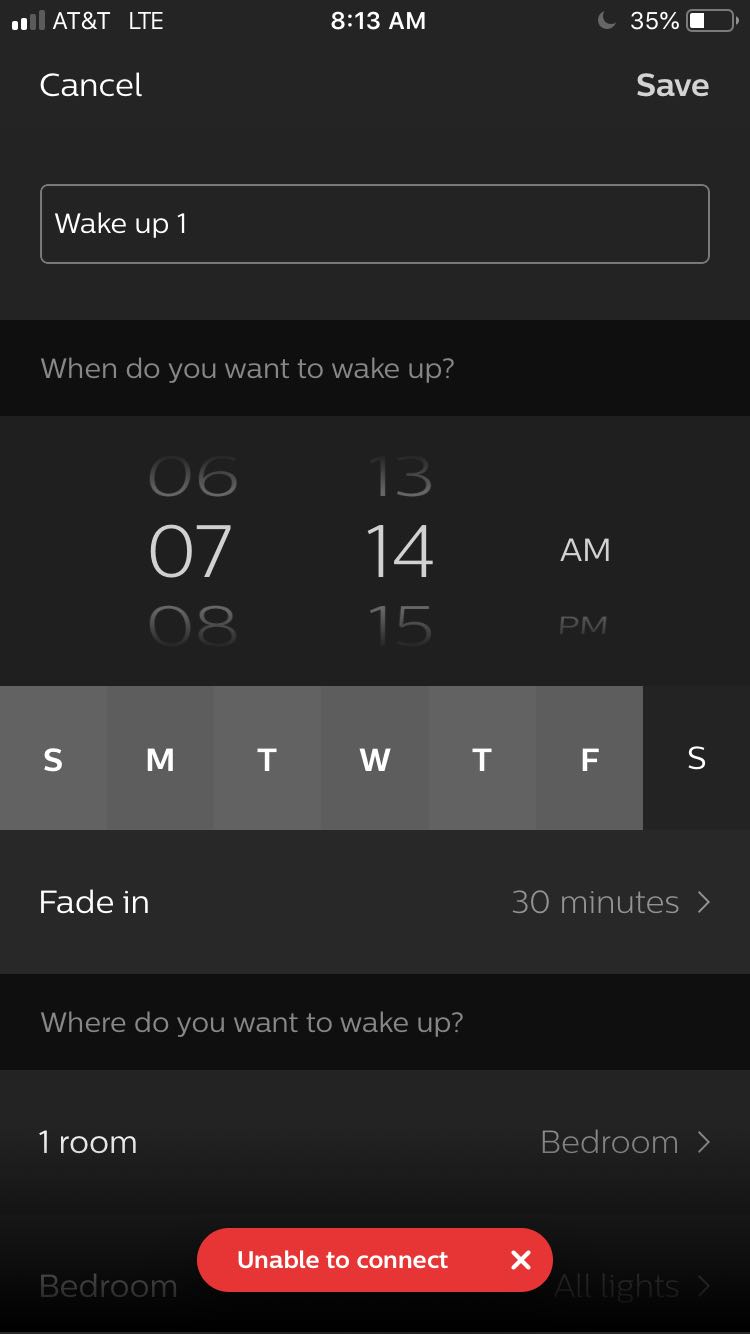 The Experience: I was strangely excited to give these lights a go, so much so that when they arrived, my girlfriend gave me shit because I was jabbering about all the cool things you can do with them — and oh jeez, did you know that you can control them with only your phone?!?! But when you get down to it, she reminded me, they’re really just light bulbs. There were four bulbs in the kit, so I took two and put them in the living room, anticipating that one day soon, when we decide to host a dinner party, they might be used for mood lighting. This elicited more laughter; we’re never hosting people at our apartment — it’s too small to hold more than four people at our dinner table.

Two more bulbs went in the bedroom in anticipation of our glorious sunrise, and I began connecting the system to our network. Set up was more or less easy: You connect all four bulbs to the network and then group them by room (one group for the living room, one for the bedroom). But as soon as everything was hooked up and turned on, it quickly became apparent that, if you want to use these smart bulbs correctly, it requires giving up on the type of light operation you’re used to — or at least giving up the light switch. Because in order to use them “smartly,” turning them off and on needs to happen on your phone; once they’re turned off at the wall switch, you can’t turn them back on with your phone, rendering them “dumb.”

This would turn out to be their fatal flaw — at least for my girlfriend and I — because, frankly, she was never going to go through the trouble of downloading an app just to use her fucking bedside lights, and now that I think about it, I don’t blame her.

That, though, was just one problem. The other problem was the Wake-Up routine. Yes, it did everything it was advertised to do — the lights turned on, slowly, corresponding to an alarm we set to go off at the end of the 30-minute cycle. But at no point did I feel refreshed, and ready to carpe diem. In fact, I felt more annoyed than anything, pissed that the lights were on so early in the morning and blaring their cheery golden “bright” color, a color specifically chosen by the Hue people who programmed the routine to be the perfect morning hue out of the 16 million available. 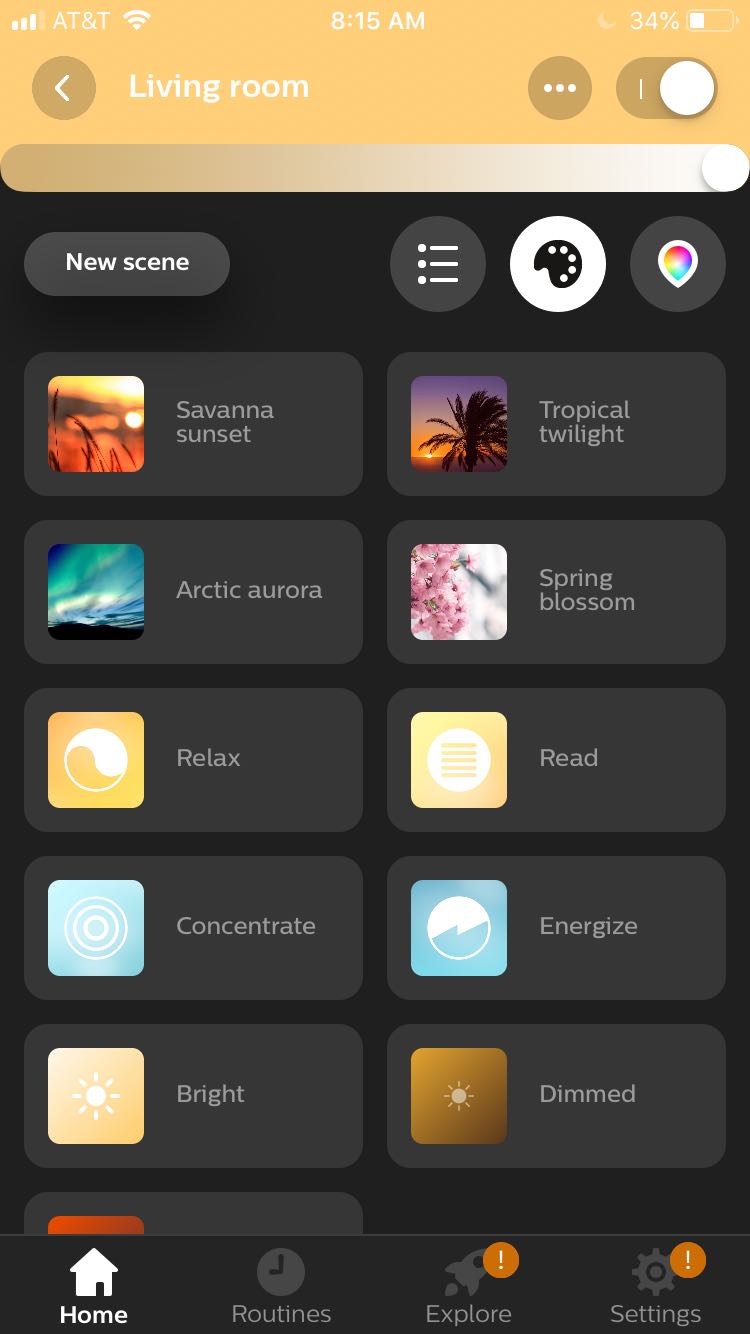 Naturally, this is where the app bullshit reared its ugly head again. If you’re awake earlier than you’d like and the lights are on, the first thing you’d want to do is go to the switch and turn them off. But like I mentioned, turning them off that way kills your ability to use the app to turn them back on, so you end up fumbling around on your phone at 6:30 in the morning trying to figure out if they’re connected to the network (they’d often get disconnected from our wireless), and which are the right bulbs in the right group in the right room to turn off.

Occasionally we’d just switch them off like normal people, but that meant that, unless we turned them back on sometime that evening, the next morning’s Wake-Up routine wouldn’t turn them back on for us. It was an annoying headache that the technology that was supposed to make them easier to use ultimately made them more complicated. 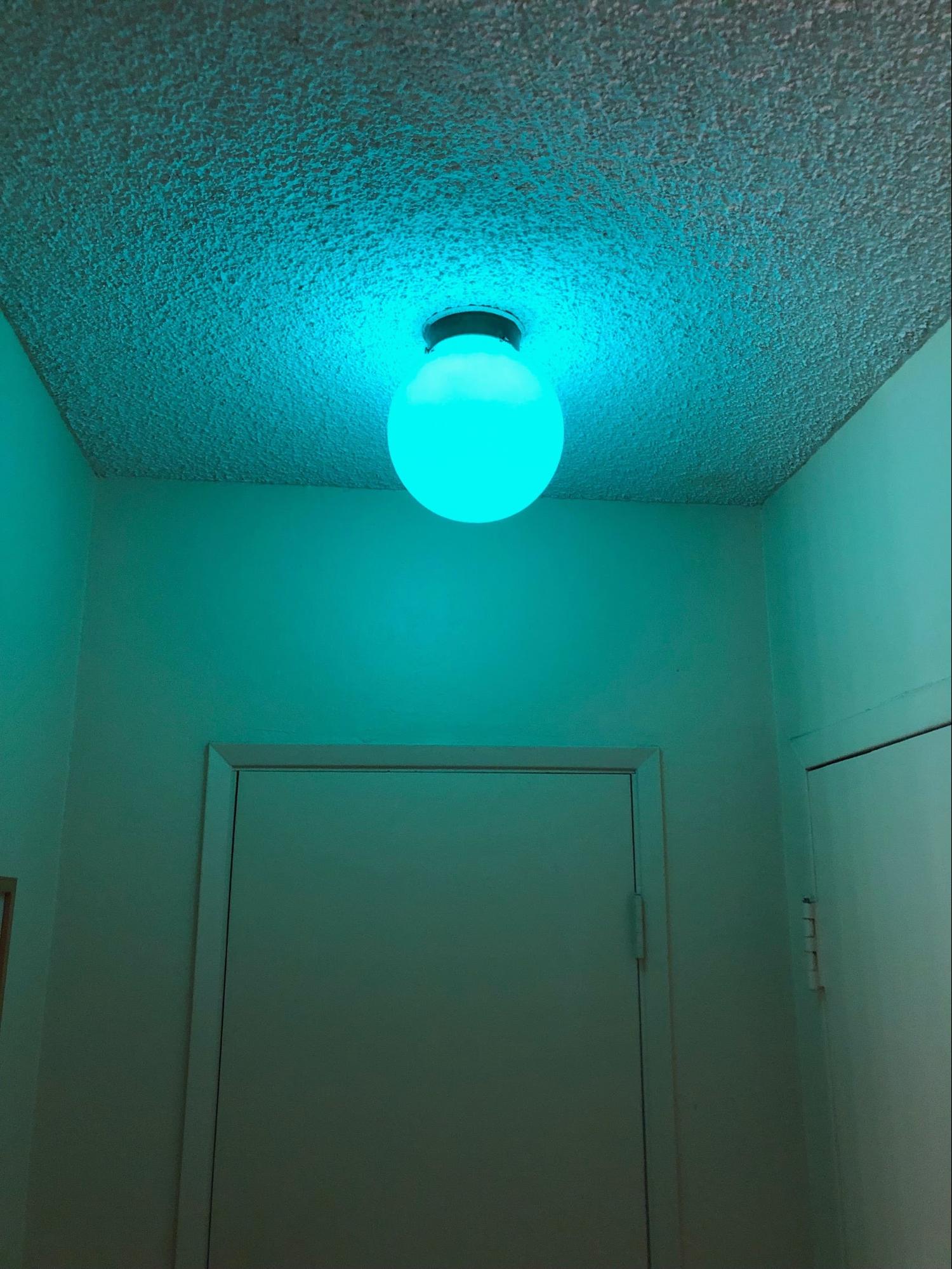 The Takeaway: In the end, we stopped trying to wake up with the “sunrise” and just started using them as regular old light bulbs. I haven’t opened the app in a week, to be honest — it’s too much of a hassle. Was the whole idea overkill, given the cost? Absolutely. If I’d known that for $199 I was ultimately buying four dumb light bulbs, when all I really needed to try out my sunrise wake-up idea was a $38 alarm clock from the same company, I might’ve done things differently.

Sure, I can imagine that, somewhere down the road, it could be cool to watch my lights change and react to my music or TV while I’m watching a movie in real time, but that’s basically the light-bulb equivalent to an iPhone’s 3D Touch feature: Pure novelty. It’s the kind of shiny toy you use a couple of times and then forget about. In the end then, as my girlfriend reminds me, the Philips Hues are basically just $199 light bulbs.

And no, they never helped me wake up to go to the gym. In that regard, I’m still as helpless as ever.