An iconic screenshot defines our yearning to know less

It would not be contentious to say that there is too much.

Of what, you ask?

But especially words, and especially on our various devices. It would take uncountable lifetimes to read every book in existence, and far more to read the sum of all digital communication. As a literate person, it’s hard not to feel this crushing weight every time you fire up your phone or laptop — you can scroll the entire day away, but you’ll still see just the tiniest fraction of what people are saying. So you try to guard your time and set appropriate boundaries. There is too much, but virtually none of it is truly worth your attention. You decide when to make the effort.

And when not to. In which case you can pull out this handy screenshot of three masterfully composed DMs: 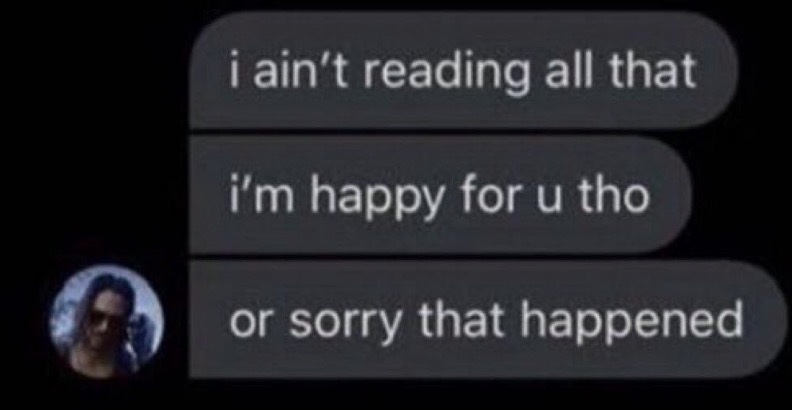 Now a staple reply of online dialogue, the “i ain’t reading all that” image appeared on the Twitter account @NoContextDM in December 2019, according to Know Your Meme. Its unique combination of dismissiveness and deliberately bogus empathy turned out to suit the freakish year that followed.

With the incredible volume and speed of events in 2020 — compounded by the stress and mania of living through them — people need a way to hit the eject button on any subplot or micro-drama that takes up precious, dwindling mental capacity. There is simply no bandwidth for a lot of the bullshit that used to distract and occasionally entertain us. On the other hand, we want the record to reflect that in some alternate dimension, we might care about the content we’re ignoring. Therefore, “i’m happy for you tho / or sorry that happened.” Done.

As a successor to the now old-fashioned “TL;DR” (“too long; didn’t read”), this response at least recognizes that however tedious the post, it’s clearly a matter of great importance to the person who wrote it. The inclusion of a Johnny Silverhand avatar — it’s a character portrayed by Keanu Reeves in the video game Cyberpunk 2077 — adjusting his sunglasses in a pensive gesture makes it feel like the speaker has carefully considered their options before choosing indifference. And with the follow-up messages, as someone on the original @NoContextDM thread observed, “the man’s got all bases covered.”

There’s a curious effect, however, to the growing prevalence of the “i ain’t reading all that” image: We now want to figure out who wrote this accidental poetry, and what kind of text they were reacting to. Was it a detailed confession? A lengthy gripe? Or a complicated proposal? We wish to read what they purposefully did not.

Of course, @NoContextDM was context-free by design, and I say “was” because the account is suspended — meaning there’s no way to ask its creator how or from whom they acquired the iconic sequence of phrases.

Luckily, after publishing an earlier version of this piece, those who know the story reached out. The author of the “i ain’t reading all that” DMs is Jeudy Viquez, @hidethesafe on Twitter, an 18-year-old in Newark, New Jersey. “I’m in an NBA group chat and my friend Will was venting about a girl and sent a large wall of text I was not interested in reading,” Viquez explains to me in a private message. “Truth be told I still have no idea what it said.” In a separate DM to the group chat, his friend Will provides more background: “From what I remember I was venting about this girl from college that I had a thing for but she never picked up on it until before she left the country and it was a long wall about our relationship.”

“I said it offhandedly and didn’t know it would become what it is now,” Viquez adds. The comments got a lot of laughs in the group, and Will “is still pretty pissed anytime it’s brought up.” As for the Keanu avatar, which he agrees “covers all the bases,” it was serendipity: “That was when the Cyberpunk trailer had just come out and Keanu Reeves looked badass.”

What led to @NoContextDM grabbing the screenshot, Viquez speculates, was another member of his basketball group chat using it to reply to a SportsCenter tweet that included an image of a lengthy statement from Kyrie Irving of the Brooklyn Nets. Crucially, this version of the screenshot cropped out Viquez’s Twitter display name at the time.

This little mystery happened to arise within a greater profusion of “No Context” and “Out of Context” accounts on Tumblr and Twitter, a genre that dates back to 2010 but has lately become unavoidable. The raw material can derive from any piece of media — weird phrases printed by the New York Times, for example — though most often it’s screenshots from TV shows, with captions included. Theoretically, the pleasure of following these feeds is an element of randomness; at any moment, your timeline could serve up an isolated fragment of The Office or Succession that juts up against the regular stream of news and chatter. Except the images aren’t actually lacking context; viewers of the series can place the moment in their memory of the entertainment, and these bits and pieces take on the additional background of the environment where they’re shared. When @NoContextTrek pins a Star Trek title card that reads “YEAR OF HELL,” it’s in the context of our hellish year, 2020.

By comparison, “i ain’t reading all that,” although widely applicable, resists obvious categorization with its pointedly mixed messages. If it conveys anything, it is the explicit rejection of context — a plea for mercy, and to go no further down the rabbit hole. It’s like saying uncle. Although we think of brushing aside some comprehensive and earnest appeal as a rude power move, it is more akin to an admission of defeat: No, I am not in the right emotional headspace to receive this information, but best of luck with whatever it may be. There is a finite limit to what we can absorb, and there’s no mistaking when you’ve hit it. We carry in us the impressions of things we’d like to un-see and un-learn. This preempts the assimilation of that stuff.

Viquez, for one, continues to gloss over whatever strikes him as unimportant noise. “Especially with Twitter’s new character limit of 280 characters, I’ve scrolled past a lot and tend to only focus on topics I feel like talking about at the moment,” he says. “I think that famous three-message DM was the result of me hitting the tipping point in terms of what I’d engage with.”

The rest of us can absolutely relate.

A funny meme for when you don’t give a shit and can’t be bothered to? Of course. But let’s be honest, “i ain’t reading all that” is also the answer of a fed-up, bone-tired people who seek distance from the endless, vapid, consuming dramas of our blighted age, and the bliss of a former ignorance. It could be the first, and critical, step toward finally “logging off.” But don’t count on it. However much we protest, nobody online can stand to be out of the loop for long.