‘Hoops’ Is a Rude, Crude, Foul-Mouthed Comedy. God, Is It Boring.

Nonstop swearing. Endless bad behavior. The only thing shocking about this new Netflix series is how cynical and safe it is.

A few years ago, a friend decided for her birthday that she wanted to invite her buddies (and their kids) to her house for an outdoor screening of The Bad News Bears, the 1976 sports comedy, which starred Walter Matthau as a foul-mouthed baseball manager coaching a bunch of foul-mouthed Little Leaguers. I hadn’t seen the movie in forever and didn’t remember much about it, but that night, what was shocking was just how filthy it was. It’s not just that characters swore in what might, ostensibly, be thought of as a family film — it was the inappropriate racial humor and the defiantly un-P.C. nature of the whole endeavor. Parents at the party, whose kids grow up in a very different time and are exposed to far more things because of the internet, were genuinely startled. How the hell did this thing escape into the world?

That mixture of kid characters and adult content continues to this day, especially in terms of animation, but the idea remains the same: We’re always a little thrown watching children curse like a sailor. (And, seriously, some of that homophobic and racist humor in Bad News Bears is really, really bad.) But coarseness doesn’t automatically translate into funny, which is a lesson you will learn again and again if you force yourself (like I did) to watch all 10 episodes of Hoops, the excruciatingly terrible new Netflix series.

An animated comedy about a loser high school basketball coach stumbling through his personal and professional life while serving as a horrible role model to his equally crude players, Hoops takes on lots of sensitive subjects — domestic violence, sexual abuse, homophobia — in the crassest, most obvious ways possible. But unlike something like Bad News Bears, where the shocks are connected to a genuinely subversive streak, Hoops is just mean and stupid and loud. Or, to speak in a language the show’s characters would understand, it’s the fucking worst.

Jake Johnson voices Ben, who lives in basketball-crazy Kentucky and is the son of Barry (Rob Riggle), who had a successful pro career and is now embraced in their town as a local legend. Ben has always resided in his vain dad’s shadow — Ben was never much of an athlete himself — and he’s stuck coaching the dreadful high school team. Things are looking up slightly, though, after he’s able to convince the school’s one really tall kid, Matty (A.D. Miles), to join the squad. Ben has little in his life — his wife Shannon (Natasha Leggero) is now dating his best friend and assistant coach Ron (Ron Funches) — but maybe if he can make this team respectable, he can land a more prestigious coaching gig and leave his hometown (and its bad memories) behind.

From the first moments of meeting Ben, it’s clear the guy is a charm vacuum — vulgar and cruel, self-absorbed and manipulative, sexist and narrow-minded — which hardly means Hoops can’t be hilarious in its exploration of this total nightmare of a human being. But creator Ben Hoffman seriously misjudges how hysterical this misanthrope is — or, for that matter, how much fun it is to hang out with any of these reprobates. There’s no gradation in the nastiness of Hoops’ characters: They’re all shallow and selfish and angry. Another thing they have in common is they’re all breathtakingly unfunny. Because no one on screen exhibits much in the way of vulnerability or even basic humanity — because we just about never get a glimpse of why these people are so deeply miserable — there’s no lift in the risqué bits about Michael Jackson or disastrous funerals or freaky drug trips. Hoops is about a world of broken people who you’d never want to spend a second with. On some level, this is supposed to be the joke. Years earlier, The Simpsons, South Park and Family Guy sought to combine animation and grownup themes, letting that seemingly jarring juxtaposition suggest a kind of truth: Even adorable cartoon characters are as human as the rest of us. But at a time in which a show like Big Mouth uses its bawdiness to pinpoint the messy, awkward insecurities of adolescent life, Hoops just feels lazy and cynical — a litany of off-color jokes meant to be transgressive. But to who? I guess it’s possible impressionable kids may land on Hoops and be excited to hear so much cursing and bad behavior — lots of dick jokes, folks — but it’s hard to imagine they couldn’t find this sort of content somewhere else. And lord knows the alternatives will almost certainly be funnier.

Johnson is an actor I’ve liked, and he’s done good voice work — particularly as the burned-out Peter B. Parker in Spider-Man: Into the Spider-Verse. In his performances, there’s a crackle in the way that he speaks that suggests wit, sarcasm, a good guy who’s trying his best not to let the world drive him crazy. But in Hoops, it’s just endless, braying anger: When Ben isn’t pissed off, it’s because he’s temporarily cheered by the downfall of those around him. (That never lasts long, though. Soon, he’ll be angry again.)

Not since Netflix’s equally dreadful sitcom Brews Brothers — which whiffed badly at being It’s Always Sunny in Philadelphia 2.0 — has a series flaunted its snotty attitude with such exuberance while having nothing remotely inspired or interesting underneath. Ben isn’t amusing because he isn’t remotely relatable. Sure, we all have our petty, unlovable side — some TV shows do a pretty good job mining that terrain for laughs — but Ben’s unremitting rancor never becomes compelling because it’s so unrealistic and unexamined. He has no dimensions, and is therefore no fun.

Neither is anyone else on Hoops. Ben’s players are bland types — one’s gay, one’s heavy-set, one’s Jewish — and the adults are jerks. Cleo King’s character, Principal Opa, is a sassy Black female that’s supposed to be an edgy caricature of the sassy-Black-female stereotype. (She has a graphic fantasy about what she wants Denzel Washington to do to her.) Opa’s exaggerated Blackness is one of the most noxious running jokes in Hoops, but it’s not the lamest. That honor would go to the fact that, inexplicably, Ben keeps referencing Little Man Tate, the forgotten 1991 Jodie Foster-directed drama. Why would Ben do that? Because it’s a total non sequitur, of course: The utter out-of-left-field absurdity of the bit is meant to be sneakily brilliant. It is not. 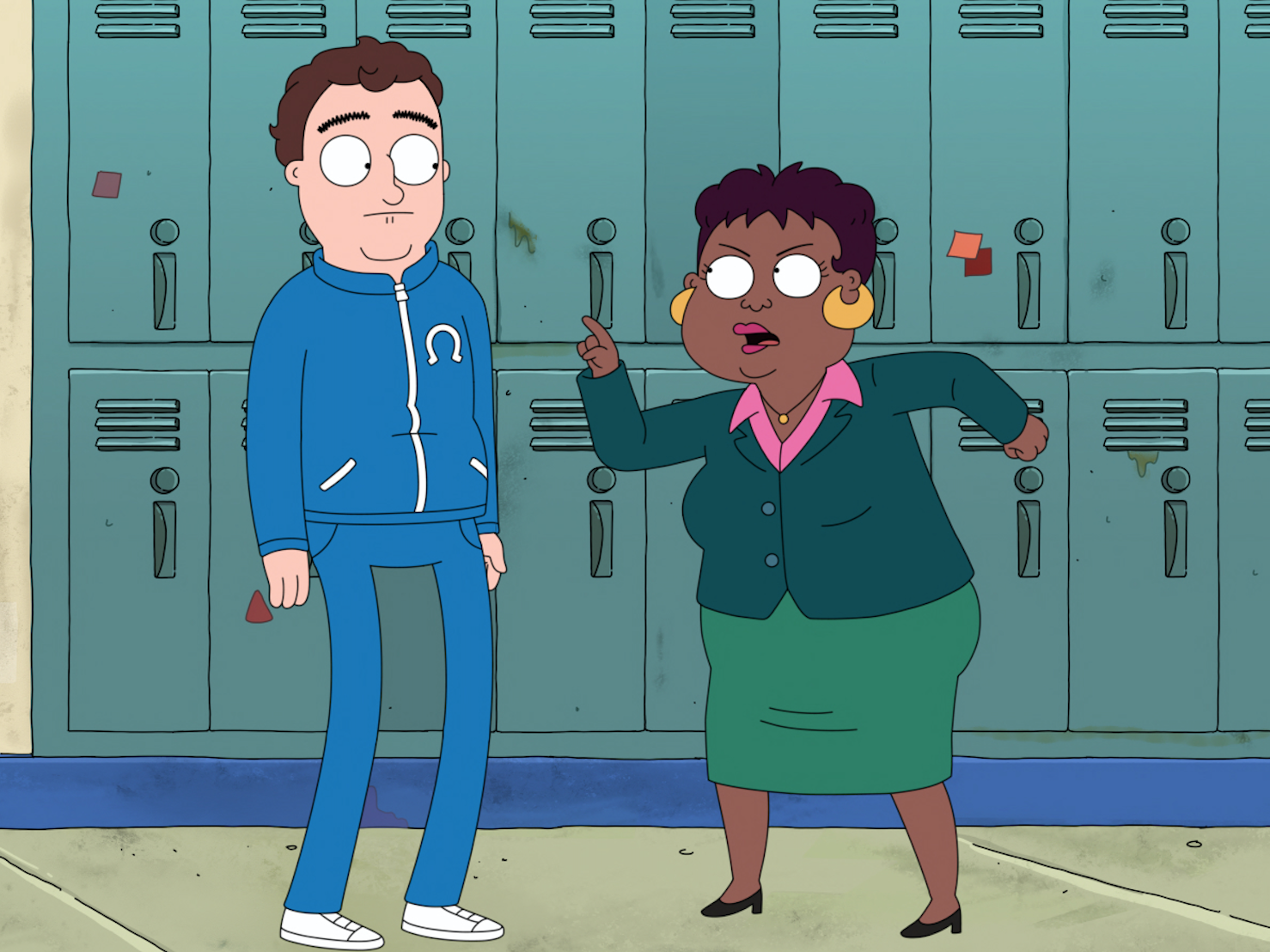 A generation after “no hugging, no learning,” we live in a TV era in which lots of bad people do bad things in both dramas and sitcoms, the consequences not always coming for those characters. That’s been a positive development, as that moral ambiguity more accurately reflects real life while also allowing writers to pursue protagonists who aren’t so black and white. But TV’s more permissive attitude toward fictional characters actually makes a show like Hoops even more pointless.

Because we now live in an entertainment climate where we’re comfortable with heroes who aren’t so squeaky-clean, there is nothing — absolutely nothing — scandalous about an obnoxious coach who curses a lot and acts abhorrently. Hoops isn’t rebelling against anything — in fact, it’s comfortably slotted into a landscape in which un-P.C. humor is still alive and well, no matter what “cancel culture” scaremongers want you to believe. When this show gets canceled, it won’t be because it was too dangerous. It was because it was boring as hell.