‘Hollyboob’ and the End of the Viral Stunt

You know what doesn’t hit anymore? The so-called “viral stunt.” It’s nearly impossible for a prank or bit of performance art to break through the roar of regular discourse. The news is weirder than any happening you care to orchestrate, and the terminally online would rather dissect some arbitrary character who did a few shitty tweets than share and laugh about offbeat regional headlines. That’s so normie, so Facebook, so 2010s. We left such delights behind.

Case in point: You probably remember, only four years back, when artist Zach “Jesus Hands” Fernandez altered the iconic Hollywood sign to read “Hollyweed,” to celebrate the legalization of recreational cannabis in California. (It was also an homage to a 1976 “Hollyweed” edit, which marked a law decriminalizing the drug.) This mischief occasioned a good deal of chatter — most of it approving — along with trending topics, histories of unauthorized adjustments to the landmark, memes, etc. A “Hollyweed” photo is now common decor in pot shops, a beloved part of L.A. lore.

But fast-forward to February 2021, when six individuals were arrested for changing the sign to say “Hollyboob,” and the response was relatively muted, if still positive. Locals had a laugh, but the photos didn’t circulate as widely. It simply wasn’t an equivalent phenomenon.

YouTube prankster Jack Tenney and influencer Julia Rose have taken credit for the “Hollyboob” revision, with Rose saying it was in protest against Instagram for deleting her account (5 million followers strong) over apparent nudity. But they may be disappointed with the amount of publicity generated for this cause and Rose’s digital publication, Shagmag. A photo of her in front of the sign has 25,000 likes — nothing to sneeze at, but also roughly the same engagement she gets for titillating selfies. Her Twitter posts about the incident did similarly underwhelming numbers when you consider she has an audience of well over half a million on the platform.

There was significant confusion over the message of “Hollyboob” as well, since several reports characterized it as an effort to raise awareness of breast cancer. One might ask: What does a model and media entrepreneur have to do to get some attention around here? 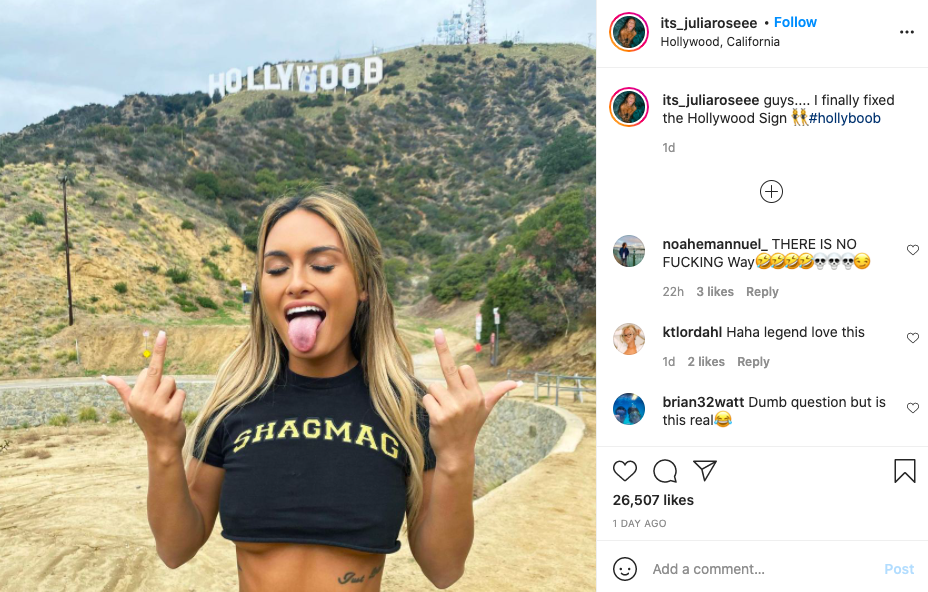 Maybe we don’t have time to stop and smell the, uh, Julia Roses nowadays. I can appreciate “Hollyboob,” even admire it as a funny use of privilege and a ridiculous escalation of your beef with Mark Zuckerberg. It probably deserved more traction just for being perfect nonsense: “Hollyboob” doesn’t quite rise to the level of wordplay, but offers the sort of compound mind-mush akin to pandemic-addled thought patterns. The added bonus, as always, is grumbling from city and site officials who want people to quit messing with the sign.

Yet none of this earned Rose and her accomplices remotely the level of exposure as, say, a TikTok of a guy deliberately falling in his kitchen and smashing a gallon of milk (almost 25 million likes, 2 million shares) or a woman’s tweet about getting rejected by a dude because he found someone vaccinated to date instead (21K retweets, 310K likes).

In many ways, we have come to prefer this smaller, organic content to the big, coordinated event. We are more averse to what seems designed for virality, rightly suspecting commercial intent. The stunt is a brand move. When a silver monolith appeared in the Utah desert at the end of 2020, many rolled their eyes at the coverage, anticipating the reveal of a cynical marketing scheme. It was altogether more surprising that no corporation finally emerged to take credit and sell their new product.

Much as the old clickbait strategies have been abandoned by all but the junkiest websites and aggregators — it’s been a long while since you had your interest piqued by the phrase “you’ll never guess what happens next” — the grandly executed designs that would’ve broken the internet in a previous age have begun to feel like anachronisms. If you can pull major clout by screencapping a zeitgeisty text exchange, or lip-synching what the president said, or instigating a run on stocks that should be worthless, why go to the extra trouble, especially when it involves getting arrested?

Moreover, our social bubbles are so heavily customized that it’s hard to develop an idea that cuts across all of them. “Hollyboob” isn’t a failure, per se, though it indicates the current limits of calculated spectacle. When you’ve seen rioters storm the U.S. Capitol in a display of chaotic rage less than a month ago, something like this is hardly diverting.

I can’t say if it’s good or bad that we’ve developed a knack for tuning this stuff out. On the one hand, it spares us from dwelling on a lot of corny, tryhard, street team advertising and PR campaigns; on the other, it diminishes our capacity to enjoy the patently dumb, “Hollyboob”-style gags in life, whatever their self-serving objectives. It is not pleasant to be totally jaded and unimpressed. And one wishes for the relative calm that allows a juvenile act of guerrilla art to become the reigning topic of the day.

Too bad. Maybe a couple of llamas can lead police cars and helicopters on a half-hour chase again — surely that’s entertaining every single time.