I can’t make any great claims to optimism. This year has been rough, and I don’t see a light at the end of the tunnel. I’m grateful simply to have a place to live, which I share with someone I love, and a few simple consumerist comforts in addition to the bare necessities. That stability, of course, is contingent upon a job — writing posts like this one — that I used to perform in an office. Now, like millions of white-collar American employees, I work from a corner of my home.

The WFH home arrangement required all kinds of adjustments, and even half a year after lockdown, the repercussions are not fully understood. But within a few short weeks, one effect was glaringly obvious: a breakdown of the distinction between the so-called “good screen” and “bad screen.” In late May, Palmer Haasch wrote an exploration of why every screen “feels so gross now” for Insider, drawing on the good/bad screen meme, a template for understanding how we perceive labor versus leisure when the same technology facilitates both pursuits. As Haasch rightly argues, the joke had always hinged on this irony; the problem was that quarantine demolished the fragile pretense of the two screen experiences being qualitatively different. Without the former boundaries and Pavlovian associations of the 9-to-5 routine, the screens had completed their merger, with the “bad” overpowering the “good” we once enjoyed. 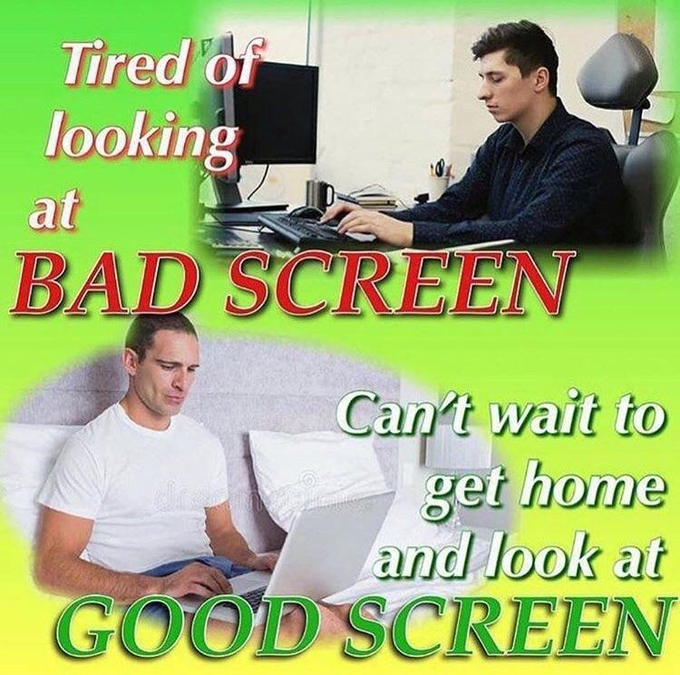 It was around this time that I and my co-workers were allowed to briefly return to the office to pack up anything we’d left behind. When I showed up, I learned I was the only person dumb enough to leave their company laptop behind. By then I was incredibly anxious to retrieve it, not just because it’s newer and faster than my own aging MacBook Air, but because of the way work, or the bad screen, had taken over my personal computer. My worn, familiar, sticker-covered baby was now a nest of editorial meetings, Slack notifications, HR portals and production schedules. It seemed like a betrayal. The good screen — with its Spotify playlists, Zoom poker nights, writing projects, streaming entertainment and endless scroll of meme-spattered social media — never stood a chance. A crisis of identity gripped me.

Thing is, I’d technically broken the rules by using my own laptop for official business. My employer wanted to prevent any such cross-contamination — although more for security reasons. As MEL’s favorite IT master Zack Gaudet explains: “It’s important because it helps to protect the company from data leaks.” With applications that manage each device, engineers “can tell if you’re offloading a ton of data onto a USB drive, show up in a strange location, use applications that are not ‘sanctioned’ by the company and block them if necessary.” They can even erase a laptop if it’s lost or stolen and registers suspicious activity.

In other words, the bad screen is the one that you lack ultimate authority over. Someone else bought it for a narrow, specific purpose. The upside here is that the bad screen can still be contained, even if you’re not slapping it closed at the end of the day and leaving it behind at your desk so you can take a rush-hour drive home to the good screen.

And as we carefully store our professional lives in the bad screen, we must be sure to limit how the bad screen manifests itself on the good. This could mean decoupling work email or Slack accounts from your phone and laptop, but it also involves taking some responsibility for curation and engagement in spaces that are theoretically fun and amusing. People love to talk about Twitter being a “hell site,” as if they have no say over what they see and respond to on there. It’s learned helplessness, and it circumvents an uncomfortable truth: The relative goodness or badness of a screen is a mirroring of our multiple identities.

No, we can’t control news and world events, but the misanthropic vibe of a social media channel may reflect some of the energy we bring to that platform. Whether your fantasy football tab is a “good” or “bad” screen depends on how well your team is doing this season. A virtual happy hour can be delightful or miserable — a taxing social obligation or an effective way to offload stress.

For someone like Gaudet, the screens were never all that divided, since in work and pleasure they held relatively similar interest. “I’ve always been in front of a screen,” he says. “I grew up when AOL chat rooms were exploding and you had to beg your parents for 30 minutes’ internet time because it would tie up the phone line. So to me, it’s not even a thought.” But now, he admits, there’s a bit of oversaturation: “I find myself working longer at the computer, then getting off for a bit and watching TV while glancing at my phone every so often.” When the screen achieves total dominion, it cannot be good.

Curiously, it could be an enduring insistence on a delicate screen binary that allows us to survive. You can resist the overlap by shifting your habits to create a barrier that is physical, temporal or purely virtual. (To that end, Gaudet recommends creating separate profiles on your Chrome browser, which would let you toggle from bad to good screens on the same device and keep them apart.) Passivity is what leads the bad screen to slowly absorb everything else, and indeed our conflation of screens is a potential dark climax to the story of technological progress for the past few centuries.

Therefore, although the original meme strikes a mocking tone — how ridiculous to behave as though the two screens are not a single, evil surface! — we must begin to take it in earnest, and literally. Only then can we be the good people worthy of a good screen. This is not a right, but a privilege. Let’s earn it.