When the Mafia Goes Gay

Down in the Calabria region of Italy (the toe of the boot), the mafia family they know is ’Ndrangheta. Over time, the organized crime group has grown into one of the most powerful, fearsome families in both Italy and the world, often partnering with Colombian and Mexican cartels, as well as the New York-New Jersey mafia in the U.S. It’s paid off, too: In 2008, the ’Ndrangheta organization was estimated to have earned $55 billion in illicit non-taxed income, and the crime family regularly accounts for roughly 3 percent of Italy’s GDP.

Even though the Gay Rights movement started at a mafia-owned bar, the Stonewall Inn in Greenwich Village, the mob has a pretty shitty history with the LGBTQ community. Basically, mafia bar owners regularly allowed police to raid their gay bars and roust their customers when the cops needed a headline-grabbing bust. But worst of all, the mob used to kill people for being gay, even if that person was the head of a crime family.

The Sopranos was said to be inspired by the DeCavalcante crime family, the largest in New Jersey. At one time, John “Johnny Boy” D’Amato was the boss of the DeCavalcante family. He was also one kinky mobster. The mafia boss and his girlfriend liked to attend sex clubs in New York City. His girlfriend, however, made the fatal mistake of telling one of his lieutenants, Anthony Capo, who was disgusted to hear that his boss was messing around with men sexually on the down low.

So he killed Johnny Boy.

It all came out in court in 2003, when Capo took the stand in an unrelated case and stunned everyone in the courtroom by confessing that he’d killed the boss of his crime family simply for having gay sex. The mafia-member-turned-government-informant recounted how his boss’s girlfriend, Kelly, told him about what the couple was secretly doing in the city and it enraged him enough to commit murder. “She told me John D’Amato and her were going to sex clubs in the city, swapping partners and John was engaging in homosexual activity,” he testified. “It shocked me. He couldn’t be acting that way — he was a leader of men.” Capo would later add, “Nobody’s gonna respect us if we have a gay homosexual boss sitting down discussing La Cosa Nostra business.”

The mafia, though, has strict rules about killing a mob boss. Capo knew and understood that, which means that he knew what he was planning to do was against the rules of the mafia. Capo admitted as much in court, when he explained, “The rule in La Cosa Nostra is not to take down a boss without the permission [of all New York crime families]. We knew we’d have to sneak him — kill him without permission.”

And so, in 1992, Capo drove over to Kelly’s place in Brooklyn to pick up his boss. He and a fellow mob associate waited for D’Amato to get in the car. When he did, the mafia don sat in the backseat. He got comfortable. And when he spoke, he had no idea it would be his last words. As Capo recounted in court, “He said, ‘Let’s go eat,’ and as we drove away, I turned and shot John D’Amato.” Capo shot him twice. But D’Amato still stirred. So Capo shot him two more times. (The Sopranos fictionalized the murder of D’Amato with the Vito Spatafore storyline about a mobster who’s discovered to secretly be gay and gets killed for it.)

“The mafia have evolved along with society,” anti-mafia prosecutor Nicola Gratteri recently told the Sunday Times. As evidence for the existence of a gay mafia beyond just Lady Godiva, Gratteri cites the fact that he’s read “passionate” letters shared between a mafia boss and one of his lieutenants and that the prosecutor has heard intercepted phone calls where mafia captains and soldiers talked about enjoying “transvestite” bars.

“Previously even rumors of being gay were punishable by death, but now the son of a mob chief is living as a drag queen called Lady Godiva,” Gratteri added. (Still, the Italian mafia continues to have stipulations about how gay its members can be; per Gratteri, “Gays can be accepted now, even as foot soldiers, so long as they don’t parade it in public.”)

In a 2015 interview with Gay (as translated by Google), an Italian-language media site, Lady Godiva talked openly about her famous mafia family and how she “happened to hear every now and then the ‘great ones’ talk” about events from the past, events that are known throughout Italy as mafia wars. And despite what Gratteri termed as a recent development, she says that she’s always been accepted by her mafia family: “I’ve never tried to hide my normalcy, my way of being and by my nature I have never flaunted my homosexuality. I have always tried to insert myself in every context with my sympathy and my naturalness, never forcing myself to be something that I am not. Even the family accepted my choices.” 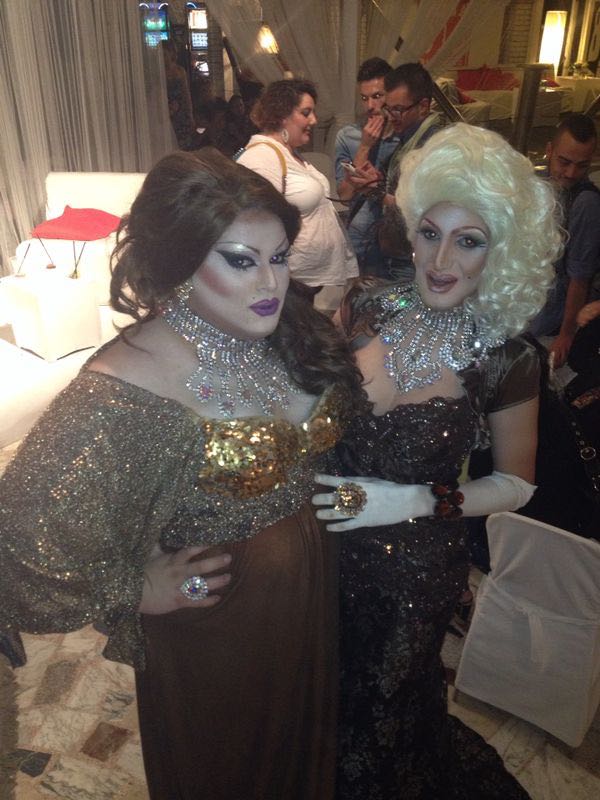 If anything, the family’s reputation tarnishes her (and not vice versa). “I know that my surname is often associated with unhappy historical events, but it never weighed on me to carry it around, because as I said before, I found myself surrounded by a family that knew how to keep the past away from the new generation,” she told Gay. “I believe that a person is not the surname he bears, but everyone is responsible for his own actions and should be judged for what he is. Shame is a sentiment that few now experience even in the face of real faults, let alone where there is no fault at all. I have always known how to behave with humility, making myself known not for my surname but for the sunny and kind person you also knew without knowing anything about my family’s past.”

Her family’s past includes some real shocking accounts — even on the scale of mafia stories. Like there was that time when Lady Godiva’s family elder Giovanni Ficara was “the target of a bazooka attack two days before Christmas, 1990.” The Italian mobster was driving his armor-plated Nissan SUV when the hitmen sent to kill him fired their bazooka. Ficara was saved by the fact that he had his Nissan tricked out with extra armor plating. After surviving the initial blast, in order to make his escape, the mobster slammed his Nissan SUV into the car of the hitmen trying to assassinate him. The hitmen responded with handguns, shotguns and assault rifles — and a Christmastime gunfight in the streets ensued, complete with a second bazooka blast, and somehow, Ficara’s survival.

So accepting a gay member of the family? I’d call that progress.