‘These Ain’t Your Daddy’s Cubicles’: Say Hello to the Post-COVID Office

Designers, medical professionals and HR experts geek out over the return of privacy to the workplace — and how the way we work will never be the same

Until recently, Grant Jones’ main product offering — the cubicle — was mostly maligned as a relic of the pre-millennial 9-to-5. But now, with a global pandemic underway, the 37-year-old owner of UsedCubicles.com has seen a “drastic uptick” in sales, as dozens of frenzied customers trade in open-concept workstations for ones bearing sneeze guards and six-foot walls. “Y’know, safety’s never really been a concern in the cubicle business,” he says. “But that’s sure changing — and probably forever.”

The competition is thriving, too. OBEX office panel extenders are completely sold out, and anyone with inventory is reporting a three-month backlog. Meanwhile, office furniture manufacturer FRÍANT is selling Safety & Comfort Screens (i.e., freestanding laminate panels) for $800 to $1,200, marketing them as “a solution that defines space between employees and keeps them feeling as comfortable as possible returning to the office.”

“It will be increasingly difficult to come by plexiglass screens this year,” Jones predicts, before abruptly changing the subject to assure me that the modern-day cubicle can be “tricked out easily.” “They’re really cool,” he promises with all sincerity. “These ain’t your daddy’s cubicles.”

Welcome to 2020, where safety concerns and workplace uncertainties abound as one-and-a-half million Americans battle the novel coronavirus while everyone else evacuates their offices and works from home instead. Forty-thousand Capital One workers will be out at least through Labor Day. Google and Facebook employees have been told to stay home until next year. Nationwide Insurance directed its people to work from home indefinitely. And Twitter employees never have to go into the office again.

In other words, knowledge-based work — as America has come to know most labor since the Industrial Revolution — will likely never be the same.

When it comes to open-office plans, that might not be such a bad thing. Because most workers, especially women, fucking hate them. They were popularized during the tech boom of the late 1990s and early 2000s to create a sense of equality by giving no one an office. New tech companies wanted to “hack” the status quo, causing “what had previously been seen as the drawbacks of open-plan office design — noise, distractions and chaos — to be seen as positive qualities,” Good & Co writer Alec Recinos explains.

The thing is, a 2017 study on the subject in the U.K. found that women in particular were often hyper-aware of being watched, and regularly felt that their appearance was on trial. In it, Alison Hirst, a professor in organization studies at Anglia Ruskin University, analyzed the behavior of 1,200 employees who moved from six buildings into one open-office space. Being an ethnographic study, Hirst herself embedded with her subjects on-and-off for three years and experienced this pressure firsthand.

“I felt compelled to borrow an expensive suit and wear makeup,” she tells me. “I thought, Bloody hell, I don’t normally spend all this time getting dressed smartly and buffing about with my hair.” As such, Hirst suspects that the interruption of sight lines in post-pandemic offices may come as a welcome regression for female workers. “Perhaps we’ll just relate to one another as fellow human beings,” she says.

Dave Ulrich, a 16-year board member of Herman Miller, the bougie office furniture darling, and co-founder of The RBL Group, an HR consulting business, predicts the post-pandemic office will be an ecosystem comprised of “SOHO” (aka “small offices/home offices”), including home offices for businesses with fewer than 10 employees; co-working spaces like WeWork, in which those from different companies share an office space; and retrofitted corporate facilities tailored to new social-distancing requirements.

“We’ve discussed various modes of the workplace,” reports architect Cary D’Alo Place with global design and architecture firm Gensler. Sometimes it will serve as a seasonal office (think tax season for accountants); a functional team office, where different departments come together depending on project cycles; or a hub office, where most people still work-from-home and the office mainly serves as a meeting space. “A hoteling desk might be booked all day as opposed to changing hands every few hours, to ease cleaning at the end of the day. Or there might be a ‘mudroom’ entry in which employees can change out shoes and wash their hands before heading to their workspace,” Place continues.

Conceptualizing the physical office will fall on folks like Place and Bill Bouchey, Director of Interiors at HOK, a global design, architecture and engineering firm serving Fortune 500 companies. Most of Bouchey’s clients — law firms, insurance companies, media brands, PR agencies, tech farms, consulting firms and production houses — are taking the pandemic seriously, but some need to do more. “[They’re not working hard enough] if they expect people to feel safe and emotionally secure in an office surpassing COVID-19 guidelines set by the government,” he tells me.

For example, explains Kristin Ciasuli, a veteran trauma nurse in L.A., companies must require employees to wear masks at all times — and that’s just the start. “All employees must be diligent about wiping down common-use items before and after use,” she says. “That means Keurigs, door handles, tables and so on. When exiting the bathroom, keep the paper towel in your hand to open the bathroom door. And people should have meals at desks or outside, versus in break rooms.”

But again, that, too, is just a start. Bouchey also advises the following:

James Woolum, a director at ZGF Architects, which recently transformed the interior of Howard Hughes’ 1940s hangar into Google’s L.A. headquarters, explains that one such device is currently being installed in ZGF’s renovated Manhattan office. “Just walk in, put your cup under a faucet, push a button on your phone, and the machine does everything. It’s back to what your mom told you: ‘Look with your eyes, not with your hands, and don’t touch things that aren’t yours.’”

But can the average workplace, many of which are drowning in pandemic debt, realistically afford a fleet of smart coffee makers these days?

“They don’t have a choice,” Bouchey says, adding that he’s already considering which AI companies to invest in. He has yet to invest, however, in cube farms. “People equate higher panels and physical barriers with increased safety and emotional comfort in the workplace, but even if the panel is completely antimicrobial (without nooks and crannies), it isn’t going to prevent an airborne virus from hopping over it.” 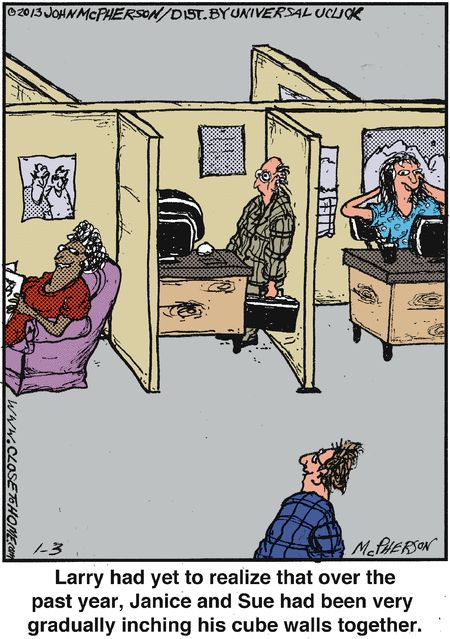 Instead, he and HOK plan to massively spread out their desks and reorient them so people aren’t facing each other, along with emphasizing a large scrum space and flexible team rooms (while minimizing the furniture throughout). How we think about the office will need to adjust, too: Instead of being a workday destination, Bouchey says offices will soon be used as elaborate conference centers where workers occasionally gather at high tops, sofas and club chairs, facilitating much-needed, post-pandemic socialization.

“The longer we are away from our colleagues, the more being together matters,” Place says, explaining that the workplace will increasingly be called upon to provide what working from home cannot — “collaboration and connection to a unified community.”

“Technology doesn’t provide the human connection that comes from being in a physical space with people solving a problem,” Bouchey adds. “Even with physical distancing, the need for that experience is never going to go away.”

None of this will be easy, and some sectors will struggle more with it than others — e.g., financial trading floors, where stockbrokers bark into each other’s faces for eight hours a day. “They’re gonna have to learn to live at a new distance,” Bouchey says, “and require upgraded communications systems connected to headsets with more robust instant messaging.”

“Constraints breed creativity,” says Jordan Birnbaum, Chief Behavioral Economist at ADP. “In that regard, this can be a wonderful opportunity for us to become more impactful, empathetic and effective communicators. Otherwise, we won’t succeed.” For longer-term organizational health, Birnbaum points to the self-determination theory, which says there are three human needs that must be met for an employee to be satisfied: autonomy, mastery and relatedness. “Successful organizations in this new, weird business landscape, will be the ones who can figure out how to give their employees those three things.”

So while some physical adjustments are to be expected, a majority of office modifications will largely be behavioral, says Woolum, who leads ZGF’s “return-to-office task force.” “I traveled 170,000 miles for work last year — to Boston, Chicago, San Antonio, New York — which is a lot of fucking air travel. I don’t see myself traveling that much anymore.”

“I don’t think business travel is ever going to be the same,” predicts Gary Leff, a travel industry expert and author of the blog, View from the Wing. Leff expects most companies to be grounded until 2021, when business travel will remain “very limited.” The convention and trade show business will be substantially impacted for a long time, he adds, because they’re dependent on bringing large groups of people together. “The entire value proposition is meeting with others,” he continues. “It doesn’t become valuable if no one else is going.”

Still, Leff is confident that a certain amount of business travel will proceed because  investors are wary of funding a company sight unseen. For C-suite travelers, he predicts a near-term increase in private air travel with companies like NetJets benefiting most. “It’s a little difficult to talk about that publicly now when so many companies are laying off workers, so the optics aren’t very good.” For the rest of us, Leff suggests buying multiple rows of cheap seats to ensure social distancing. “On competitive routes, you’ll often see $49 cross-country fares, so buying those extra seats for privacy becomes a good strategy. Virtually all the major U.S. airlines have let you do that for years, just nobody really knows about it.”

Overall, like Birnbaum said, if we think creatively enough about all of this, it might actually be the best thing that’s ever happened to us professionally, freeing us from our desks and the very expensive cities where most of our companies reside. Besides, if you end up missing the feel of the office, Jones always has a cubicle he can sell you.