What Are the Bolts on Frankenstein’s Monster’s Neck Actually For? A Very Important Halloween Investigation

Is there any way of concluding they’re his nipples? Could those bolts, in fact, be nuts?

Frankenstein’s monster is one of the most iconic creatures in horror. Stitched together from parts of dead bodies and given life through electricity, it leads a short, cursed, violent existence. Plus, in most big-screen versions, it has cool bolts sticking out of its neck and goes “Urrrrrr” a lot.

(Frankenstein is, of course, the name of the creator. The creature remains nameless, although at one point facetiously refers to itself as Adam. Referring to the creature as Frankenstein, or a Frankenstein, is guaranteed to enrage some people, even though realistically, if the creature had a surname, it would probably take that of its creator. It’s not going to be, like, Monster Smith. If you run into a hospital and scream, “My arm’s been ripped off by Frankenstein!,” and a doctor looks at you over the top of his glasses in a wry manner and goes, “You’re telling me a scientist did this? Looks more like the work of his nameless monstrous creation to me…,” that is a terrible doctor. Everyone knows what you mean. It’s fine. Call it Frankenstein, call it “the creature,” call it Frankenstein’s monster, just don’t call it late for dinner! Right?!?!)

Back to the bolts, though. What are they for? Are they structural? Are they antennae? Nipples?

To figure this out, let’s start at the beginning with the book, written by Mary Shelley in 1818, when she was just 21 years old, and hailed in some circles as being the first science-fiction novel. Bolts are thin on the ground in the original text. “There is nothing like that in the novel,” says Adam Roberts, sci-fi novelist and professor of 19th century literature at Royal Holloway, University of London, who has written extensively about Shelley. Here is the relevant excerpt:

“With an anxiety that almost amounted to agony, I collected the instruments of life around me, that I might infuse a spark of being into the lifeless thing that lay at my feet. It was already one in the morning; the rain pattered dismally against the panes, and my candle was nearly burnt out, when, by the glimmer of the half-extinguished light, I saw the dull yellow eye of the creature open; it breathed hard, and a convulsive motion agitated its limbs.

“How can I describe my emotions at this catastrophe, or how delineate the wretch whom with such infinite pains and care I had endeavoured to form? His limbs were in proportion, and I had selected his features as beautiful. Beautiful! Great God! His yellow skin scarcely covered the work of muscles and arteries beneath; his hair was of a lustrous black, and flowing; his teeth of a pearly whiteness; but these luxuriances only formed a more horrid contrast with his watery eyes, that seemed almost of the same colour as the dun-white sockets in which they were set, his shrivelled complexion and straight black lips.”

“It’s really downbeat, anticlimactic, drizzle on the windowpane, compared to the melodramatic climax of the movie version, all shrieking ‘Live, my creation, live!’ and lightning strikes and so on,” explains Roberts. “The creature is a strange mishmash of stereotypically ‘male’ and stereotypically ‘female’ qualities; on the one hand, muscles and arteries and whatnot, while on the other, ‘beautiful… hair was of a flowing, lustrous black and teeth of a pearly whiteness.’”

Hollywood’s creature, flat-skulled and vaguely Neanderthal facially, covered in scars and staples, is very much its own thing, without a lot of lustrousness or pearly whiteness. While there were screen adaptations of Frankenstein as early as 1910, James Whale’s 1931 adaptation of the book, starring Boris Karloff as the monster, presented the world with a version that remains pretty definitive and instantly recognizable today — complete with neck bolts.

The film had a troubled production, with original director Robert Florey and star Bela Lugosi leaving early on. Whale came in to replace Florey and rethink and recast the project, which changed from the story of a wordless killing machine to something much more nuanced. Whale brought in fellow Brit Karloff, and they made Hollywood history. Everyone involved seems interested in taking credit for the bolts, with ousted director Florey insisting he had the idea and scribbled a note about it on the script, and the Whale biopic Gods and Monsters crediting Whale with them. Karloff contributed some of his own ideas, including removing a dental bridge to give the creature a sunken cheek, but the majority of the credit needs to go to makeup artist Jack Pierce.

Pierce spent hours every day building up Karloff’s head with multiple layers of cotton and ultra-flammable collodion, a painstaking process in the years before rubber masks. Karloff’s neck ended up permanently scarred from the plugs, which he referred to as “alemite caps.” (An alemite cap is the bit that covers a hole in a lubricant gun, presumably the kind of thing people joked about regularly 80 years ago.) During an appearance on This Is Your Life, Karloff was beamingly presented with one by Pierce, who he called “the best makeup man in the world.”

The Frankenstein design isn’t the only iconic one on Pierce’s resume. A few years earlier, he had worked on The Man Who Laughs, transforming Conrad Veidt into Gwynplaine, a man whose features have been permanently disfigured into a monstrous grin. The image of Veidt was a huge influence on the creation of Batman’s nemesis the Joker in 1940. Pierce is also the man who gave Dracula his distinctive widow’s peak. If Pierce wasn’t as good as he was, just think how many people’s shitty thigh tattoos would look very different. Despite his impact, Pierce died mostly forgotten, his funeral attended by just 24 people. (That said, Guillermo del Toro recently offered to finance a star on the Hollywood Walk of Fame for him.)

The design casts such a long shadow nearly a century later that nobody has ever really tried an adaptation that goes with the book version of the creature’s appearance, all eight feet of it. Even Mary Shelley’s Frankenstein, the (astonishingly boring) 1994 film by Kenneth Branagh that attempted to adapt the book faithfully, went off-script with the appearance of the creature. Portrayed by the 5-foot-10 Robert De Niro, this incarnation is all scabs, scars and staples, with a peach-fuzz shaven head rather than anything approaching “lustrous.”

The creature has shown up in more than 60 movies and is referenced in hundreds more, to the point that anything with bolts on its neck is clearly seen as a reference or homage to Frankenstein. Herman Munster — according to the show’s lore, another of Victor Frankenstein’s creations — sports the bolts, as does his identical twin brother Charlie. The monster in Mel Brooks’ Young Frankenstein, portrayed by Peter Boyle, has the bolts, as does the monster in 2004’s utterly shit Van Helsing, played by Shuler Hensley. Frankenweenie? A dog with bolts on. 1990’s Frankenhooker, starring Patty Mullen, has the excellent if problematic tagline, “A terrifying tale of sluts and bolts.”

The most common use for bolts is, obviously, to keep things in place. Given the stitched-together nature of Frankenstein’s monster, could the bolts in his neck be there to stop his head falling off?

The field of head transplantation is a tricky one. As the International Journal of Surgery puts it, “transplanting a head and brain is perhaps the final frontier of organ transplantation.” The brain needs a constant flow of blood to stay alive, a huge amount of nerves have to be successfully grafted to one another in order for the brain to be able to move the body, and the risk of rejection is high. Given the delicacy involved in performing such a task, opting to stick it all together with a big metal screw is possibly not the path most surgeons would take. But if there’s one thing you can say about Victor Frankenstein, it’s that he’s not most surgeons.

The point where your neck meets your head is fairly complicated, structurally. There’s the medial atlanto-axial joint, which allows for rotation of the head independently of the torso, as well as the atlanto-occipital joints, which allow raising and lowering of the head. In terms of all the new nerve connections healing, limiting that movement might be a good idea, in which case the bolts could act like a primitive version of a Halo Vest, the brace systems used to help broken necks heal.

However, there are also a bunch of versions of the creature that have the bolts positioned on either side of its forehead. DC Comics’ version, for instance, has a huge but bolt-free neck and metallic stumps protruding from its temples, while The Monster Squad’s version, played by Tom Noonan, has cranial plugs. At a glance, a third of the cheap plastic costume-party ones available are intended to go on the forehead rather than the neck, and given that the forehead doesn’t really move and a simple roll of tape could get the job done there, the innovative proto-Halo theory is probably not the one.

(Both locations have access to the central nervous system, either via the brain or the spinal cord, so it’s worth considering whether the creature can feel them. Are they super sensitive, like scrotum-made-of-nipples sensitive? Would tickling the end of one of the bolts send the monster into squirms of pleasure? Are the bolts… nuts? Probably not, because they’re metal and so contain no nerve endings, but it always seems worth considering these things.)

The thing is, for bolts, they could definitely be more… boltlike. Over on the Mandela Effect subreddit, r/Retconning, there are suspicions that where the creature once had chunky, hexagonal, none-boltier bolts, at some point it’s all shifted to something smoother and unthreaded, more like an electrode. The creature is brought to life by electricity, after all, and whatever the bolts/plugs are, they’re metal, so it would make sense that they were used in channeling the electricity into the body to power it. However, looking back at the 1931 film, they don’t appear to be connected to anything — if you watch the scene in which the creature is animated, it’s held in place with a brace on its head, and large croquet hoop-style barriers going down its body, but there’s nothing near where the neck bolts are.

This is an oversight, according to Pierre Fournier, creator of iconic Quebecois comic Red Ketchup and a man who knows more about Frankenstein than maybe anyone else alive, running the extraordinarily informative site Frankensteinia.

“They were meant to be electrodes, something to convey electricity into the Monster’s body, but that was never explained,” says Fournier. “Reviewers and critics took to calling them ‘bolts’ right from the start. They were also called ‘mechanical knobs’ and even ‘radio knobs.’ Early on, the Monster was referred to as a ‘mechanical man.’ One early newspaper ad depicted the Monster with bolts sticking out of his neck, temples, shoulders, elbows, wrists, hips, knees and feet. It was only later on in the series, as B-movies in the mid-1940s, that the electrodes were put to use when the Monster reclined on his slab with wires running down from above and clamped to the bolts. He would then rip them off and start his lab-destroying rampage.”

There we have it: They’re there to conduct electricity, but the filmmakers slightly whiffed that part. Ultimately, though, does it matter what they’re for? They look cool as shit. And if anyone claims they don’t? Well, to paraphrase the mad scientist who put them there, “It’s a lie! IT’S A LIE!” 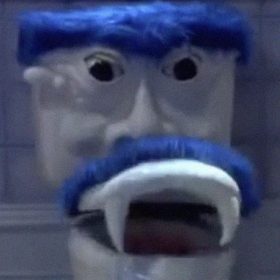