The Strange Phenomenon of Online Follow-Shaming

People never use an invention exactly as intended, do they. I’m reasonably sure the four dudes who launched Twitter in 2006 didn’t foresee it becoming a platform for white supremacists to organize, nor that it would give rise to social phenomena like “subtweets,” “the Ratio” and fast-food chains referencing No Nut November. But here we are, 13 years later, and these are the realities of the ecosystem we’ve made.

And, because almost everyone’s a cop, there’s something known as follow-shaming.

What happens is, you identify a Bad Person — guilty of some cancellation-worthy offense, most likely — then inform anyone who follows both you and the Bad Person that said Person is Bad. If you’re particularly desperate, you may just tag the biggest and most influential accounts who follow the Bad Person and demand an explanation. This week, a bizarre confrontation between communist teenager @DxGGEAUX and an account representing the New York Times crossword section culminated in this fashion. 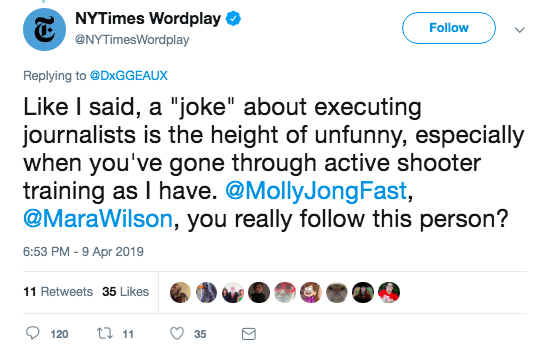 You can debate the merits of the inciting tweet all you want. Personally, I find it amusing and in no sense as threatening as, for example, the legions of MAGA chuds who openly fantasize about gunning down the purveyors of “Fake News” with the president’s explicit blessing. But in any case, tagging author Molly Jong-Fast and writer-actress Mara Wilson, who both command a Twitter audience of hundreds of thousands, is some real public meltdown behavior. And it… did not go as planned.

Because Twitter’s support team and executives are not at all disposed to moderate the bullshit hosted on the site (up to and including the, uh, rampant Nazism), it can feel like you have no recourse in settling one of these disputes. The best option, of course, is to not engage in the first place, especially if you’re tweeting for work as the representative of a major media brand and the other person is a shitposting 17-year-old with a cartoon dog avatar.

This is called “snitch-tagging.” It’s often a last-ditch effort to impose your idea of moral order on a place that has no interest in these rules. As such, it’s also a concession: You stepped into an argument you weren’t really prepared to have, and now you’re appealing to the parental authority of third parties who aren’t culpable in whatever indignity you claim to have suffered.

Following someone online is not an endorsement of their every waking thought, and nobody vets a person’s entire timeline before deciding to follow in the first place. Journalists in particular are obliged to follow any number of complete assholes who happen to be newsworthy figures. To put a finer point on it: Reading the New York Times doesn’t mean I think opinion columnist Bret Stephens has a functioning brain.

So yeah, before you run crying to a blue-check account you think will take your side and shame your enemy du jour, remember that this will almost certainly cast you as a crybaby with a superiority complex.

To be sure, there are times when it’s appropriate to DM a friend and say, “Hey, did you know you’re following this maniac who said [marginalized group] don’t deserve basic human rights?” Because they might not know! People change over the years, and someone with whom they worked or interacted amiably in 2011 may have been red-pilled and MAGAfied in the interim. It happens. Other than those instances, you have no real choice but to let nature take its course. Twitter is hell, and god has no dominion here — you’re gonna have the fights you picked. And if you’re truly galled that the troll dunking on you has a few mutual connections, you could always unfollow them. Anything’s better than tattling.