How Fiji Water Became the Most Memed H20 on Earth

The Fiji fandom emerged from an online subculture known as vaporwave, which encompasses a soft aesthetic of chill electronica, surrealist glitch, ’80s- and ’90s-era tech, Japanese text and neon

Don’t ask me why, but when I’m about to board a plane — an event that mostly afflicts me with dread and sublimated rage — I get irrationally excited to spend $7.50 on a giant bottle of water. I know it’s wasteful and environmentally disastrous that so many people hydrate this way, but the airport is an extenuating circumstance, I feel. Surely no one can judge me for choosing to indulge as I prepare my body to spend some hours in a cramped sky-bus. And since I’m already spoiling myself, why not go for that Fiji Water?

The mixture of guilt and luxurious pleasure that Fiji Water instills in me, the consumer, was front and center — or, uh, back and to the side — at the 2019 Golden Globes. The star of the red carpet turned out to be Kelleth Cuthbert, one of four models hired to stand around with trays of Fiji for thirsty celebrities. Cuthbert proved an adept photobomber, appearing time and again behind the arriving Hollywood elite, much to the delight of social media users.

As the corporate tweet above shows, Cuthbert’s viral moment quickly turned into an orchestrated marketing gambit aimed at the meme-minded, an attempt to inject the brand into the internet’s cluttered consciousness. She may as well have worn a sign that read “FIJI AND CHILL?” for all the subtlety of this performance. But I wonder if her popularity wasn’t the outcome of a tautological formula, whereby Fiji trended because the brand is already a meme, not because they figured out how to become one. Ask yourself if #FijiWaterGirl would’ve made the same splash serving Dasani, Aquafina or even the equally high-end Evian, and you’ll understand what I mean. Fiji has long spoken to the web’s indie creatives, becoming a piece of their visual headspace. You can find it on T-shirts, phone cases, hats and onesies. I myself own a Fiji ashtray. 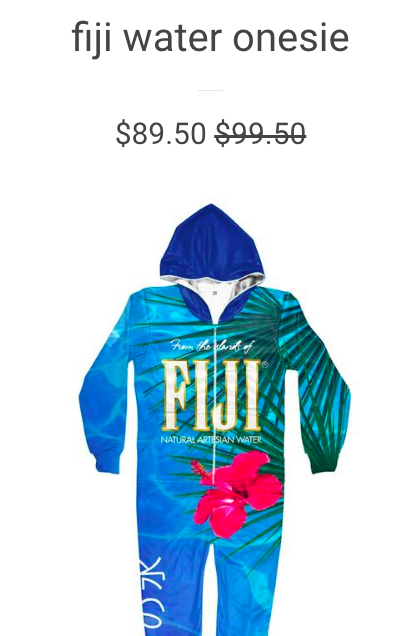 The Fiji fandom emerged from an online subculture known as vaporwave, which encompasses a soft aesthetic (or A E S T H E T I C, as many adherents would style it) of chill electronica, surrealist glitch, ’80s- and ’90s-era tech, Japanese text and neon blues, greens and pinks. Fiji’s lush packaging, like that of Arizona Green Tea, is a palette-perfect match for this vibe. The bygone Crystal Pepsi completes our trifecta of vaporwave beverages, and it helps triangulate the capitalist critique that drives the ironic veneration of such refreshment: Each is positioned as an elite, exotic thing to drink, whereas the reality is hardly so glamorous. As Eric Wu, the fashion designer selling that Fiji onesie through his label Publicspace.xyz, writes on the product page: “Nothing encapsulates corporate greed and consumer distortion than Fiji Water. They sell you water that tastes objectively worse than tap water and mark it up 280,000 percent.”

(He’s not kidding about the tap water, either — it beats Fiji in a blind taste test.)

Over at Vox, reporter Aja Romano has a comprehensive breakdown of how the bottled water industry survives on a manufactured need while exacerbating climate crises, and she scrutinizes how Fiji has misrepresented its impact on its island namesake while profiting from the nation’s natural resources and beauty. These are the ethical qualms that nag but don’t quite prevent me from treating myself to a giant Fiji after a long, sweaty run, and we could argue this is exactly the tension of a millennial’s plight: knowing that a specific consumer choice is the wrong one for both the planet and your wallet, then making it anyway — because if the planet is doomed, shouldn’t I enjoy the last of what it has to offer? I make the same joke when ordering tuna rolls at sushi restaurants: I have to eat as much of this fish as I possibly can before it goes extinct. 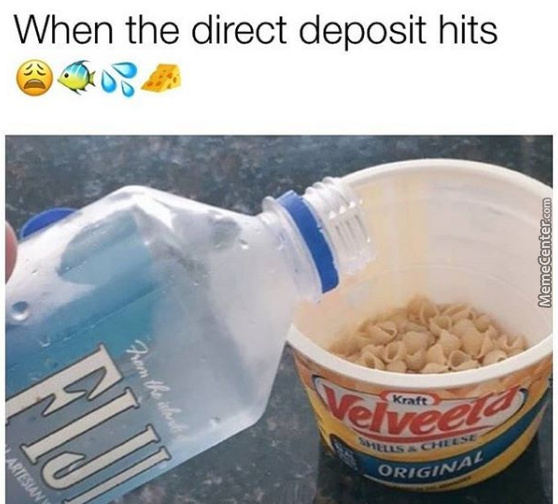 The attraction to Fiji represents, at the same time, a remarkable shrinking of scope and ambition. Where a person might once have dreamt of visiting Fiji, this debt-ridden generation fantasizes of being able to splurge on water transported from that remote and alluring region to their local bodega. It’s emblematic of prosperity and comfort that isn’t really ours but was tacitly promised by sunny appraisals of the global future we got in the history textbooks of the 1990s — the same decade, incidentally, that Fiji Water was founded. Like a great number of memes, then, Fiji functions as an attack of nostalgia on the present, and of reality on illusion. We have “successful” careers, but we live paycheck to paycheck. We imagine that Fiji Water is a pure and elegant substance, untouched by human hand, yet there’s President Trump clutching a bottle of the stuff with his two little baby flippers. At the end of the day, any dirtbag can easily cop some. 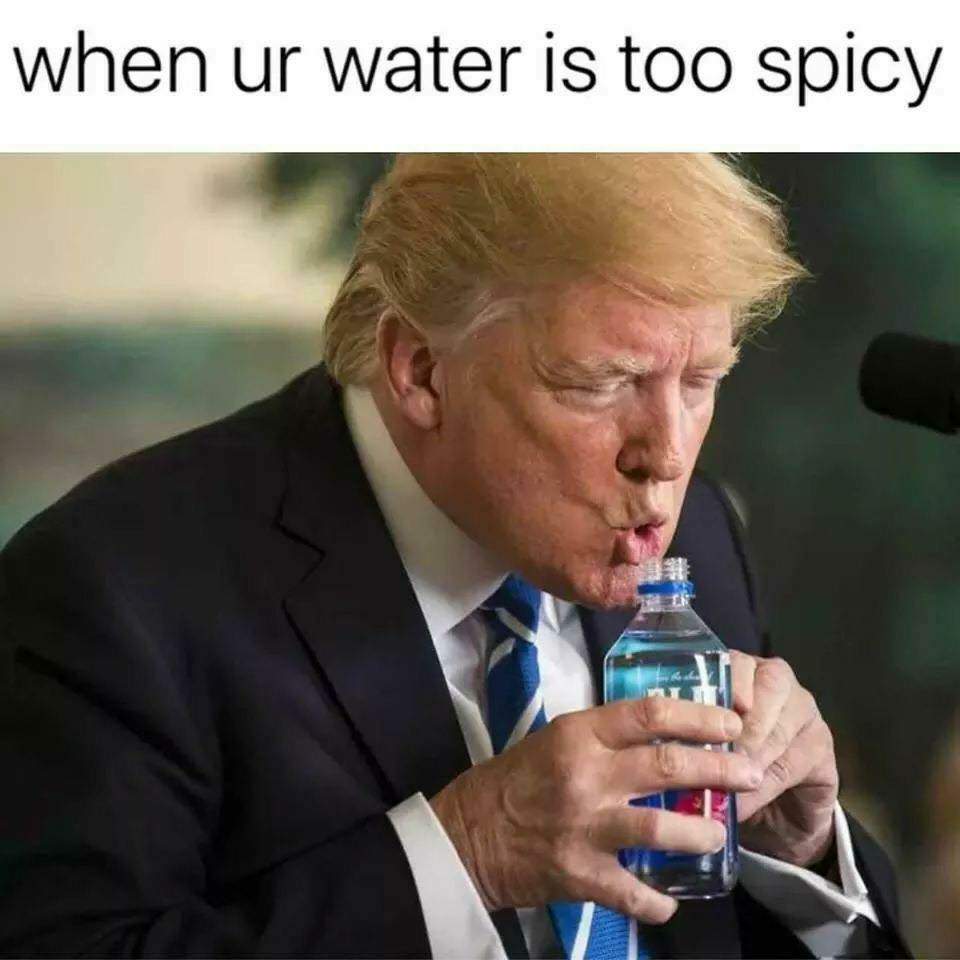 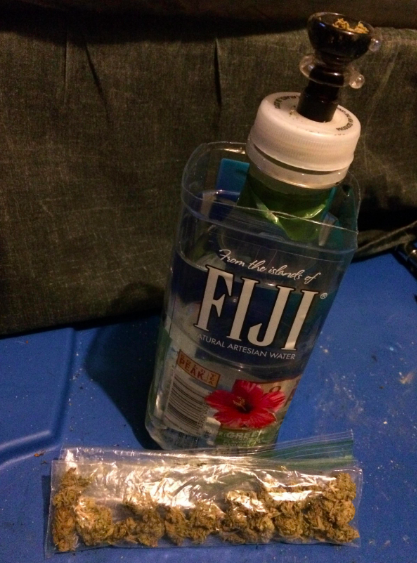 And yet, and yet… who would not experience a wave of serenity at coming home, opening their refrigerator, and finding row upon neatly ordered row of Fiji Waters? The image — the lie that makes a paradise — is too powerful. As always, we are victims of desire, a yearning this brand has tapped like its artesian aquifer.

That, I submit, is why nobody could take their eyes off the Fiji Water Girl, who stood in for and symbolized the corporate dream, beautiful and supremely tranquil as she offered a taste of life itself.

Let’s try to remember, or at least not forget, just who is allowed to have that taste.