The Liberal Cringe of ‘Fauci’

The admiring portrait of Anthony Fauci, which comes to Disney+ tomorrow, convincingly portrays the immunologist as a principled, compassionate individual. But it also flatters its left-leaning audience without ever challenging their beliefs

Jill Godmilow is a professor and nonfiction filmmaker who wrote a provocative essay entitled “What’s Wrong With the Liberal Documentary” in which she lays out all the weaknesses of well-meaning, left-leaning documentaries meant to champion liberal viewpoints. Obviously, lots of documentarians are liberal — as is their audience — but Godmilow had some thoughts about the intellectual traps these films fall into:

“I’ve been thinking for a long time that what is commonly understood as the progressive or liberal documentary is an inadequate form — a relatively useless cultural product, especially for political change. Its basic strategy is description and it makes its argument by organizing visual evidence, expressive local testimony and sometimes expert technical testimony into a satisfying emotional form.

“We understand ‘our’ documentary films as residing outside the dirty domain of propaganda — inhabiting instead a non-ideological, pure information space. The unscripted feel of the footage is its pedigree of ‘truth,’ its guaranteed claim that there are no hidden agendas, political or otherwise, buried in its text.

“Though the liberal documentary takes the stance of a sober, nonfiction vehicle for edification about the real world, it is trapped in the same matrix of obligations as the fiction film — to entertain its audience; to produce fascination with its materials; to achieve closure; to satisfy.”

Don’t let Godmilow’s academic tone — or the fact that this essay was written in 1999 — deter you from how timely her words still are. As our society becomes more and more polarized, we naturally gravitate toward work that echoes and flatters our worldview, and depending on your political persuasion, there’s a whole crop of nonfiction films right up your alley — and also ones you’ll avoid like the plague. (I’m not going to bother with ultra-conservative Dinesh D’Souza’s hatchet-job documentaries on Hillary Clinton and others — partly because they’re terribly made and partly because I have no interest in his slanted view of certain progressive politicians.) But as Godmilow points out, liberal audiences can be just as susceptible to nonfiction films that tell us what we want to hear. But do they actually provoke us to do anything?

It’s worth pointing out that Godmilow was writing specifically about movies that look at social ills — poverty, racism, inequality — and yet, her words are prophetic in terms of some of the rah-rah, liberal-minded documentaries that now come our way, especially ones that are glowing portraits of progressive figures. On one level, it’s nice that there are documentaries such as The Fight out there highlighting the efforts of important groups like the ACLU, but on another… well, I’m already pretty inclined to be sympathetic toward any documentary about the ACLU. In other words, these films are created for an audience who will be predisposed to love them anyway. If documentaries are about trying to capture “reality,” some sort of unalloyed “truth” — they’re not, that’s a myth, but just go with it for a second — then it’s worth asking what kind of reality they’re meant to reflect. Or, rather, what kind of truth they’re trying to sell.

Fauci comes to Disney+ tomorrow, and it’s an eminently likable and thoughtful portrait of Anthony Fauci as the filmmakers hang out with the famed immunologist during the peak of last year’s COVID crisis. Dealing with dozens of meetings and juggling different interview requests, Fauci (who turns 81 in December) is remarkably sharp and focused despite all the demands on his time — not to mention the perils of an unpredictable pandemic. The documentary shows him to be a loving husband and father, although he wishes he had more time for his family, and he’s a funny, endearing presence on camera as he looks back on his life. If you were seeking proof that Fauci is a fraud endangering the country, Fauci is not the film for you. But if you developed a crush on him during lockdown, the movie will only bolster your standom.

Certainly, there’s nothing wrong with admiring Fauci, who’s been the director of the National Institute of Allergy and Infectious Diseases for decades. He’s helped safeguard the country through lots of scary moments, like SARS and Ebola, and he was on the frontlines when the U.S. (albeit, belatedly) finally started getting serious about tackling AIDS. Plus, he was a wonder at handling Donald Trump, somehow always walking the fine line between appeasing the boss (so he wouldn’t get fired) and educating the public about what they should and shouldn’t be doing to protect themselves from COVID, even when that advice ran counter to the president’s moronic suggestions. Truly, Fauci is a man worth celebrating.

As a piece of infotainment, Fauci does its job briskly and competently. But I found myself being suspicious of that particular job — even though I knew the documentary was working on me in certain ways. I’m a progressive who cares about Fauci’s agenda — pro-vaccination, anti-Fox News — and yet I found myself resisting the packaging. I get the value of films like Fauci — and I understand the financial incentives in making left-leaning films — but it’s hard not to be cynical about the dull sameness of progressive documentaries. Sure, Michael Moore’s jokey, strident films are nothing like RBG, the overly cutesy portrait of Ruth Bader Ginsburg from a few years ago, but what they (and others, such as Fauci) have in common is a desire to boost liberal viewers’ spirits. “Buck up,” these films tell us, encouragingly. “We’re doing great! Look at all the good these folks are doing!” I didn’t know we needed so much cheering up, but apparently we do. 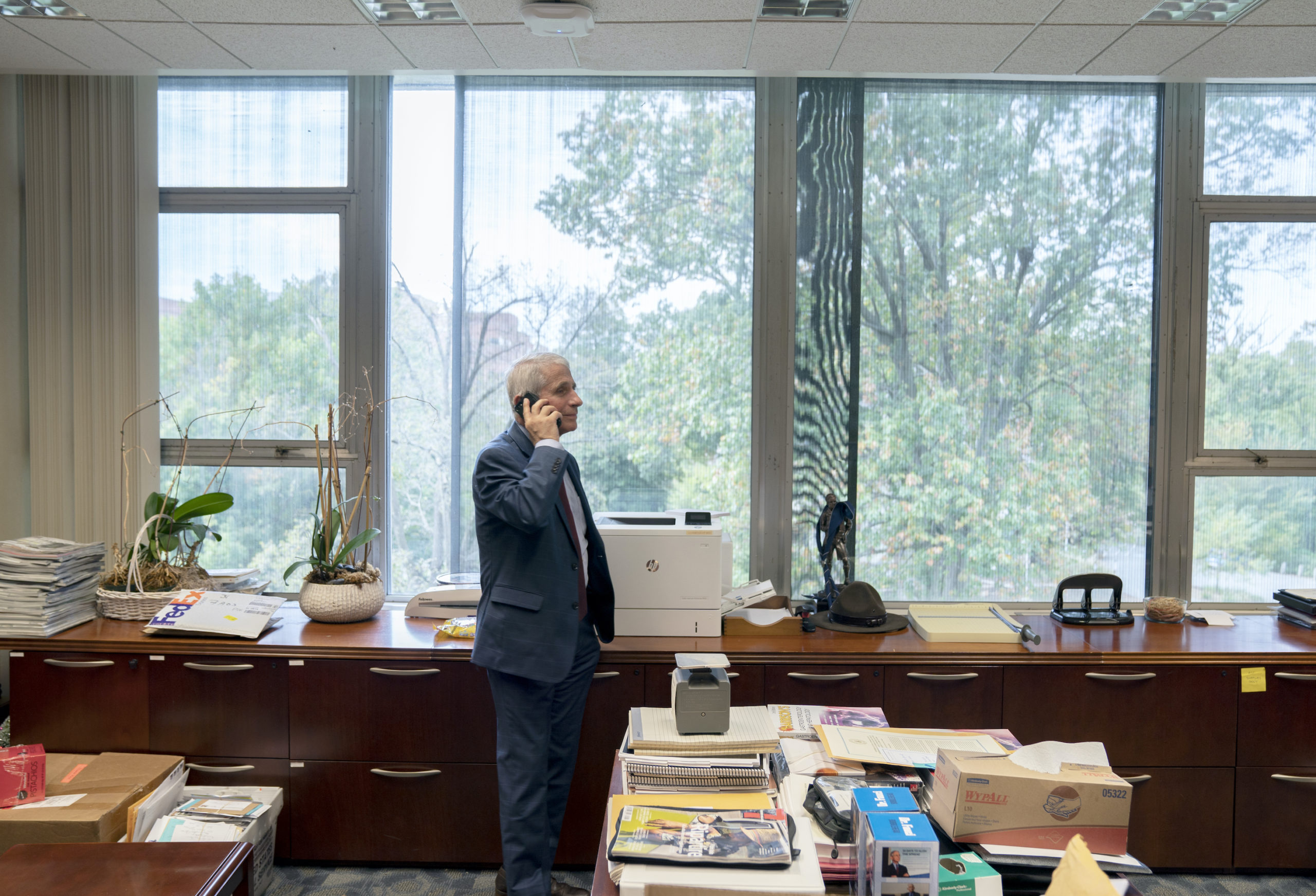 In Fauci, this approach translates into a vividly positive depiction of Fauci, which isn’t to say that directors John Hoffman and Janet Tobias ignore criticisms of the good doctor. In the 1980s, AIDS activists were furious at him for his slow response to the disease, which inadvertently helped perpetuate an ugly societal mindset that it wasn’t “our” problem. (AIDS was just affecting homosexuals and, hey, “their” lifestyle was wicked anyway, right?) In Fauci, Fauci is forthright about owning up to his shortcomings during that time — he initially didn’t have enough empathy for the terror and rage those dying from AIDS were feeling — but Fauci makes sure to populate the screen with activists who sing his praises.

It’s not that Fauci wasn’t instrumental in changing America’s consciousness about AIDS — he still gets teary thinking back to how he failed to act fast enough — but the documentary’s slick, polished approach turns that controversial period into a comforting little teachable moment: See, Fauci wasn’t always perfect, but then he corrected his mistake and everyone was happy. It’s a little too easy and a little too glossy — it’s the illusion of a nuanced portrait without ever making the subject (who’s allowing the filmmakers access to him) feel too uncomfortable.

I’m sure the right has its share of glowing documentaries as well — just as there are plenty of nonfiction films and biopics about rock stars and athletes that treat their subjects like heroes and gods. The instinct is understandable: A filmmaker wants to make a movie about someone he or she admires, so of course it’s going to be a positive portrayal. Also, if you like that public figure, you’re going to be more interested in a movie that confirms your rosy view of that person. You rarely get a Lance, which takes a more combative position, director Marina Zenovich pushing Lance Armstrong into uncomfortable terrain and making him reckon with the less-savory aspects of his career.

But even though Anthony Fauci isn’t necessarily a political figure — he’s served both Republican and Democratic presidents — Fauci certainly plays to a progressive base that views him as the white knight who kept Trump from killing even more of us during the worst of the pandemic. Unfortunately, it’s not a deep dive into what makes him tick — it doesn’t really try to explain or understand him. (Instead, we’re reassured that he’s a regular guy like you or me. Why, he’s just a goofy dad when he’s home with his kids.) The film doesn’t even aspire to be Won’t You Be My Neighbor?, which genuinely grappled with the unknowable (and somewhat unnerving) pure kindness of Fred Rogers. It mostly just tells you that you’re right for liking him.

I can’t begrudge viewers who will seek out Fauci’s feel-good vibe. Who doesn’t need a little positivity from time to time? Uncomplicated docu-portraits like this are meant to be pick-me-ups for those feeling down that the world doesn’t always reflect their (progressive) values. But I found Fauci a little too tidy — almost as if the filmmakers knew I’d be an easy target. It’s an ad that’s selling the general awesomeness of Anthony Fauci — and, hey, why do you have a problem with that?

I suppose I don’t, but I do think about Godmilow’s comments about liberal documentaries. What, exactly, is the political change provoked by Fauci? If it makes any vaccine-hesitant people more willing to be jabbed, that’s something. But, more likely, it feels like a film meant to soothe, not provoke. It’s meant to reinforce your beliefs — specifically, your belief that you’re smarter than people on the right who trashed the guy. But it won’t inspire you to take action. And, more importantly, why did you need a film to reinforce those beliefs in the first place? 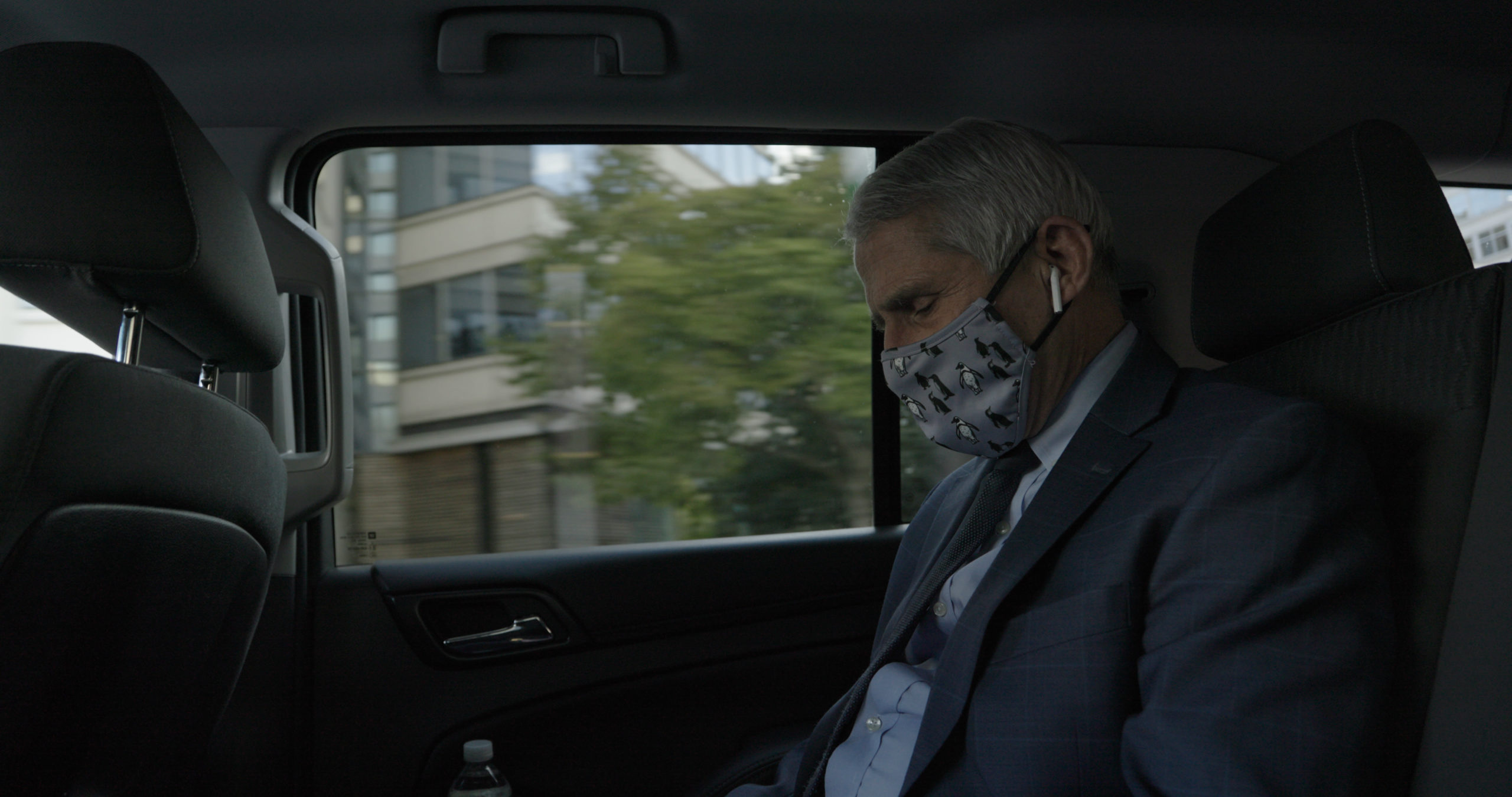 All year, I’ve been replaying in my head a conversation I had with filmmaker Ephraim Asili, whose The Inheritance explores a progressive Black collective trying to create a better society than the one we have. I asked him about the fact that, now that Trump is out of office, some liberals seem quite content to go back to their lives and stop protesting social injustice. He wasn’t surprised at all by that development.

“This is the liberal dilemma — this is what happens every time we get a Democrat in the White House,” he told me. “It’s like, ‘Oh, finish line, goal!’ — and then people go back to doing whatever it is they do. The liberal agenda is about not seeing problems, not necessarily about fixing problems. … The right, to give them some points, their sense of outrage and activism is always at fever pitch. They don’t back down. The left backs down once one gets comfortable. But that’s the point about being a liberal — you want everybody to be comfortable.”

As well-intentioned and informative as Fauci is, it’s a film designed to make you feel comfortable. (After all, it is streaming on Disney+, hardly a beacon of subversive, radical content.) As Godmilow might say, Fauci provides closure. “For the most part,” Godmilow wrote, “[progressive] documentaries address and entertain educated middle- and upper-middle class audiences — audiences of persons who come to the documentary cinema to learn about the world and, perhaps, to get fired up about something. It ends up confirming and making comfortable the class status of that middle-class audience, by providing an opportunity for compassion, for uplift, for hope, and finally, for self-satisfaction — and perhaps complacency.”

I felt that complacency while watching Fauci, a film I have to admit I enjoyed, leaving my screening with warm feelings toward Fauci, who’s unquestionably an impressive man. But I didn’t feel prompted to do anything or to take action — I didn’t feel challenged or provoked. Like with other progressive docs, I felt reassured that “our” people were out there taking care of business — that I didn’t have to worry about doing anything. I’m not sure if that’s not enough. Maybe it’s naive to think a movie can change the world. But to assume that it can’t, or shouldn’t, somehow feels worse.