Everything You Can’t Bring on an Airplane (and Why)

Don’t you DARE bring any bowling pins or canoe paddles on this plane!

Anyone who’s unintentionally carried a normal-sized tube of toothpaste through TSA, only to be treated like El Chapo, knows that airplanes have strange and ambiguous rules when it comes to what you can — and categorically cannot — bring on them.

Your average traveler abides by these rules, simply because not doing so could result in a shitty airport experience even without being outright sexually assaulted by power-mad TSA fuckheads. But since the idea that someone could actually bring down a plane with a bottle of shampoo or a large tub of hummus seems wildly unrealistic at best, I spoke with captain Ross Aimer, CEO of Aero Consulting Experts, about the reasonings behind these seemingly overzealous security measures.

First, though, Aimer mentions that what you can and cannot bring on an airplane often depends on where you are, and sometimes even what your desired airline allows. As one example, he points out that weed is legal in California, and therefore, both TSA and local law enforcement might allow it through security. Aimer also explains that TSA agents have no policing power, so with issues like these, they often defer to the local police, who would then decide what happens to you and your dank kush.

The point is, since what you can and cannot bring on a plane depends on several factors, Aimer suggests looking up the rules for your chosen airline — and depending on whether the flight is domestic or international — to avoid being pulled aside for a cavity check.

TSA spokesperson Lorie Dankers also tells me, “TSA has multiple resources available to passengers to help them determine whether an item is permitted in carry-on baggage, checked baggage or not at all. Travelers can use the ‘Can I Bring?’ feature on the TSA mobile app. Travelers can also tweet or message ‘AskTSA’ if they have a travel question or are unsure if an item is allowed through security in a carry-on bag. Just snap a picture or send a question and get real-time assistance.”

But back to why so many items are banned from the skies — since there are heaps and heaps of things prohibited from planes, here are the main categories, along with the reasonings behind them being outlawed…

These are banned from planes for obvious reasons: To prevent purposeful hijackings and accidental explosions. See, besides the clear problems that would arise if someone were able to bring a weapon (firearms, axes and hatchets, billy clubs) on an airplane, Aimer says that explosives (fireworks, hand grenades, party poppers) and flammables (butane, paints, sparklers) are particularly volatile in the skies. “You have different oxide conditions than you do at sea level, so things burn much more violently,” he explains. When you consider that planes are perhaps the absolute worst places to experience an uncontrollable fire, it makes sense that these items are banned — although, they perhaps went overboard with the potential weapons, banning things like bowling pins and canoe paddles.

The same kind of explosive logic has also been used to ban virtually anything containing pressurized gas — cooking spray, for example. As Aimer explains, pressurized containers, like hairspray and shaving cream, can explode when the air pressure drops onboard a plane, which could pose some dangers.

One of the more complicated potential explosives is lithium-ion batteries, which have been known to explode from time to time and can be found in the likes of phones, computers and even sex toys. Now, you might be glad to learn that vibrators are allowed on planes, as are phones and computers, even though you need to display them while going through security so the TSA can take a closer look and ensure there are no hidden explosives. That said, depending on the size of the lithium-ion batteries inside these devices, you might need to take some special precautions, like those explained in the video below.

Another obvious one, Aimer explains that poisonous, infectious and radioactive materials (aerosol insecticides, bear spray, chlorine) are outright banned from planes, since they have the potential to spill (or explode under pressure) and infect the entire cabin. Makes sense!

The most perplexing — aggravating, even — items banned from planes are virtually any liquids (water, honey, gravy, soft cheese) more than 3.4 ounces. Interestingly enough, though, you can bring ice through TSA so long as it’s frozen during inspection. The reason, as Aimer explains, is that bad guys could potentially bring various separate liquids onto a plane, then mix them together to create a homemade bomb onboard. This might seem far-fetched — and sure, it might be at times — but Mental Floss explains that the Feds did their due diligence: “After the Feds foiled a liquid explosive plot in 2006, officials tested explosives and determined the amount of liquid needed for a serious blast. In fact, 3.4 ounces is the maximum amount of liquid that poses little to no risk to travelers.”

Good thing they throw all those potential volatile liquids into the trash can right next to the security checkpoint! 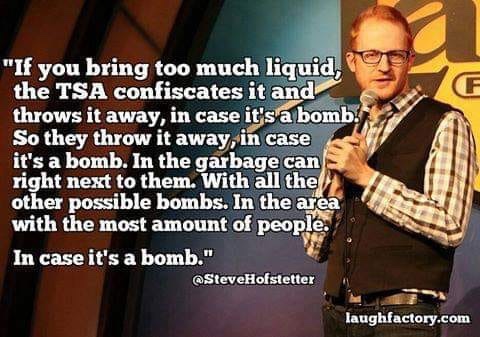 On the plus side, though, while you may have to leave your bowling pins and billy clubs in your checked bags, you can bring mini liquor bottles through TSA, since they’re less than 3.4 ounces. Woo-hoo!

On a final note, I want to emphasize once again that there are tons and tons of miscellaneous items — many of which could theoretically fall under any of these above categories — prohibited from planes, so if you’re unsure about anything, just search it on this TSA list.

Now gimme that damn party popper and run through security before you miss your flight.