Elite Competitive Whistlers Put Their Lips to the Ultimate Test

Ron Deschenes, a bowtied, bespectacled Canadian advertising executive, had wanted to enter a competitive whistling event ever since he saw the documentary Pucker Up, which followed the goings-on of champion whistlers like Geert Charou at the now-defunct International Whistler’s Convention in Louisburg, North Carolina. Like so many other frustrated artists forced to pursue their passions around their work schedule, Deschenes, a singer who had been the frontman for several bands, wanted to see how good he really was.

“I sent in my audition video to the Masters of Whistling competition in L.A., only to discover that I’d been assigned to the second stage out of three, where mostly intermediate-level whistlers were placed, so I realized I was pretty good,” he says. “But I also saw that I was surrounded by people who were exceptional. People with perfect pitch or flawless technical skills, who were able to warble [constantly change notes] at incredible rates of speed. I wasn’t whistling tunes that I wanted my Ontario bandmates to play anymore. This was the real deal.”

“What Ron, who had a very good musical sense, understood at Masters of Whistling, is what many good whistlers realize when they come to events like this — because for years they’ve often been the best whistler they know, only to finally see what some other people are capable of,” says Yuki Takeda, a Japanese whistler who won first place among male performers at this year’s Masters of Whistling and finished second overall to world champion and friend Akiko Shibata.

Takeda, who has lectured about the potential of whistling as its own form of instrumental music, is one of those next-level performers who blew Deschenes’ mind. “Most people including myself pucker whistle, using the lips, and a handful palate whistle — that is, blowing air between the palate and the tongue — but Yuki can do all of that,” Deschenes says.

Takeda, who took piano lessons throughout his childhood and has since branched out to other instruments, was 16 when he saw the winners of a whistling competition being feted for their accomplishments on Japanese television. One of the teenage whistlers boasted about his ability to whistle three octaves. “I thought that was really cool, and then I did it,” he explains. “But there was much more to it than that, many more techniques for me to master and a surprising amount of whistling history to learn about.”

Although only 27, Takeda takes the long view of whistling history. “Whistling performance today has tentpole events in the form of the Masters of Whistling competition and the World Whistling Convention, which was founded by a Japanese whistler named Ryosuke Takeuchi in 2011,” he says. “But whistling performance goes back well past the now-defunct Louisburg, North Carolina competition, which started in the 1970s. Whistling as a performance art was a critical part of vaudeville performance, where many women excelled as whistlers, with whistling lending itself well to early sound recordings. Agnes Woodward, a professional whistler, even founded the California School of Artistic Whistling in 1909 to teach her techniques.” 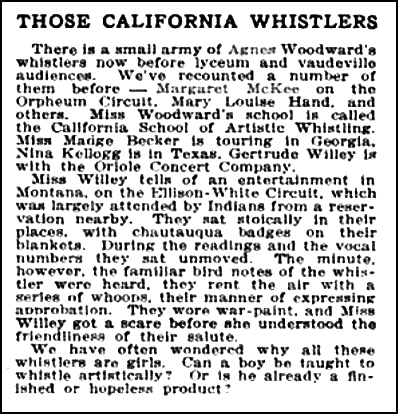 Woodward claimed to have developed her signature techniques by studying birdsong and taught her signature “Bird Method” to a host of women and male performers such as Pat Boone, Bing Crosby and John Wayne. Even now, other working musicians continue to reach similar whistling-related conclusions through the study of birdsong. “I learned how to whistle from my dad, but I really brought it to the next level when I lived with my friend Laura, who had this amazing technique, which she learned from her mother, that allowed her to whistle like a bird,” says Maryland-based jazz singer Abby Schaffer. “It involves changing the airflow by an undulating of the tongue.”

Some of Woodward’s own bird-trained pupils were still whistling in the 1990s, but Takeda notes that whistling history remains fragmentary and always in danger of being lost. “When the International Whistling Convention website went dead, its list of winners and competition photos and everything else went with it [some of this remains accessible through the Wayback Machine]. As much as champion whistlers like Geert Charou have gotten their name and work out through their strong showings at these events, it’s also possible for much of the detailed history of whistling, including certain techniques used in the distant past, to simply vanish into thin air.”

There is, of course, something quaint and charming about the act of whistling, so when it’s covered by the press at all, it’s generally as a curious novelty — or as something strange and otherworldly, like when a child prodigy named Joseph Engressia (later known as “Joybubbles”) used his perfect whistling pitch during the late 1950s to whistle the precise 2600-hertz frequency that enabled him take over tone-dialing phone systems and make free long-distance calls, a whistled tone that became the basis for hardware-assisted phone line hacking, or “phreaking,” later exploited by budding computer nerds like Apple co-founders Steve Jobs and Steve Wozniak.

“Yes, the media loves stories about whistlers doing various ‘standards’ and dressing in vintage outfits, and while some people do perform these standards at contests, that’s far from everything the field of competitive whistling encompasses,” Takeda says. “There’s much more happening out there. Artists like Romu Aoyagi have become extremely technically advanced whistlers.”

That said: “One of the highlights of the Masters of Whistling was watching the Wilberdings, Peter and Andy, father and son, perform ‘Teddy Bears’ Picnic’ together while wearing porkpie hats and bowties,” Deschenes tells me. “Yes, it was traditional, but it was very well done.”

Aside from the traditional American songbook, when people outside the world of whistling consider whistled music at all, they generally think of songs that have catchy, albeit simplistic, whistled portions, like the Scorpions’ “Winds of Change” and Guns N’ Roses’ “Patience.” More recently, rapper Flo Rida incorporated whistling into his 2012 single “Whistle,” and indie rocker Andrew Bird managed to steal the show in 2011’s The Muppets, demonstrating an otherwise-shy muppet’s prodigious whistling skills.

“You take these songs, and they’re all interesting in different ways, but I’m not going to perform the whistled parts of songs,” says Takeda. “You can, of course, be a very skilled vocalist who like Bobby McFerrin, who utilizes whistling among many other techniques and who scored a hit single with ‘Don’t Worry, Be Happy’ but who has also had an impressive career that stretches well beyond that. As for me, I’m going to take an entire song, either classical [meaning European classical music, for Masters of Whistling purposes] or popular [everything else], and then set that to whistling. One of the finest albums of actual whistled music is jazz whistler Ron McCroby’s The Other Whistler, which is excellent throughout but features the amazing song ‘Cherokee’ around the six-minute mark.”

“When you’re whistling an entire song, the most difficult thing is getting the correct pitch,” warns Akiko Shibata (translated from Japanese with Takeda’s assistance). “Once you’ve selected your song, first check each note on the piano while looking at the score. Whistle in time with the piano sound and learn the pitch using your body’s senses. When you can whistle through a song, record your performance on the recorder and listen to it again. Once the pitch is correct, you’ll have a clear image of the song, and you can practice it over and over again to express the image. If you perform with that image in mind, you will be able to convey emotion through your whistling of the song.”

That’s why, too, she continues, “The most important thing for contests like these is the song selection. There are almost no songs written for whistling, and there are no rules for competitions like Masters of Whistling regarding song selection, so the selection of music is completely up to the performers. That’s why it’s very important to select songs that make use of your own whistling tone and techniques. I always spend a lot of time deciding which songs to perform. When I’m doing so, I usually listen to as much music as possible and take note of all the songs that resonate with my heart.”

Meanwhile, for Deschenes, the trip from Toronto to L.A. was a supreme labor of love. “I’d been saying I’d go to an event like this when I could, and suddenly I realized that I was at a point in my life at which I can,” he says. “Most of the participants at the event aren’t necessarily there to become whistling stars, like Geert Chatrou or Sean Lomax, but rather to see what the art of whistling can reveal about themselves, to experience something novel and to see where they can take their own art.”

In Deschenes’ case, his art was as much about his father, a notable jazz trumpeter during the 1960s who passed away a few years earlier, as it was himself, as the songs he performed held great significance to his dad. “Essentially, not being a talented instrumentalist left me without a way to express the love for jazz music my dad imparted in me,” he says. “I could sing, and I could whistle a tune to help my bandmates along, but coming to the Masters of Whistling helped me find that musical connection with my father.”

And so, their bond didn’t exactly remain unspoken, it just didn’t come with words.