Eat Your Heart Out: The Bobbie Turkey Hoagie

‘The Bobbie is something I always reach for. It reminds me of being young. It speaks to me of childhood, of happiness.’

Matthew “The Warax” Moores is a Marine Corps veteran who served in Afghanistan and retired in 2016. He has spoken candidly about PTSD and military culture, but also serves as The Warax, a satirical Twitter figure inspired by Dr. Seuss’ “The Lorax,” who “speaks for all trees.” Similarly, the Warax speaks for all veterans, mostly by critiquing military issues with one-liners and memes for his 20,000 followers. He is the second in a series of men we’ve interviewed about the dishes which — either through nostalgia or comfort — fill the soul.

I’m from a town called Newark, Delaware. It’s spelled like Newark, New Jersey, but we pronounce it differently — noo-WAHRK — and I don’t know why. But growing up in Delaware, it was pretty boring, really. There’s nothing to do there. Our claim to fame is that we’re close enough to Philadelphia and Baltimore that it’s not a pain in the ass to get there.

But something we do have is The Bobbie. The sandwich is basically a roll with juicy oven-baked turkey, then some well-seasoned stuffing, nothing fancy or cornbread or anything, then cranberry sauce and mayo. It’s Thanksgiving dinner on a loaf of bread. It’s a popular sandwich at our famous sub shop chain Capriotti’s. When I was in high school, Capriotti’s was where you went to hang out with your friends. And I remember The Bobbie being more seasonal — it was something that people really got excited about when it started to get closer to fall. But you can find it everywhere. Even gas stations.

I actually remember ordering one before I left to enter basic training in the Marine Corps. It was one of the last things I did, and I ate it with the expectation that I probably wouldn’t have good food again for a while. What’s funny about food in the Marine Corps is that, whether it’s good or not, there’s never enough time to eat it. And I think that’s a lot of veterans’ experience. They get locked into this habit of, whatever the meal is — doesn’t matter if you’re sitting down in front of lobster or you’re sitting down in front of the worst MRE, the veggie omelet — you’re going to eat it so quickly that you don’t taste it. It’s a weird thing. Even these days, a time in which I really enjoy cooking and making what I cook look nice on my plate, as soon as my ass touches the chair, that food is gone. [Laughs]

Anyway, every time I returned home on leave, I always got a Bobbie. And in true Marine fashion, it’d be gone in well under two minutes. It’s something I craved after being deployed. The other thing I craved was not having to worry how long I was in shower — since water is rationed in the desert, obviously.

But that was a while back — I retired three years ago. I make it up to Delaware more often now, from Washington D.C. where I live, and The Bobbie is something I always reach for. It reminds me of being young, to be honest. I recall really looking forward to going to the store to buy that sandwich. It speaks to me of childhood, of happiness. I had a big family, so during Thanksgiving we would end up doing a tour of several houses, stopping at my Aunt Gail’s, then my Aunt Charlotte and sometimes even my grandfather’s. It was a lot, and it’s nice to remember those feelings.

Oh, and about gravy: Wawa, the gas station chain famous in Delaware, does have a gravy version called “The Gobbler.” But it’s a bit much for me — and a fucking mess. [Laughs] 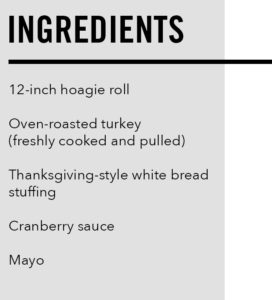 (Note: The famous Bobbie from Capriotti’s uses pulled turkey meat from a whole bird. If that’s too much, you can roast a single turkey breast or leg instead. Worst-case scenario, just slice up some high-quality deli turkey breast and heat it up in the microwave.)

Preheat the oven to 400 degrees. Season the turkey meat with salt and pepper, and roast until the internal temperature passes 150 degrees for breasts and/or 170 degrees for legs — this can take between 45 minutes to an hour-plus, but check with an instant-read thermometer.

In the meantime, prep your stove-top stuffing. You can either make something from scratch or use prepackaged stuffing mix. Either way, it’s a basic process: Sauté chopped onion, carrot and celery in a pot or deep pan until they soften, add cubed bread and cook until golden. Then add herbs, seasoning and enough chicken broth to moisten the mix to your desired consistency. You can also make cranberry sauce from scratch, but the prepackaged stuff is fine, too.

Remove the turkey when it reaches the correct temperature, and let it cool until you can shred the meat into chunks. Slice the hoagie roll lengthwise, and smear each side with a layer of mayo. Mound the warm turkey on the bread, and add a generous line of cranberry sauce down the middle. Top with warm stuffing, close it up and enjoy.