Eat Your Heart Out: My Mom’s Jersey-Meets-Egyptian Fried Chicken Cutlets

‘When I asked her how to make it, she told me, ‘If I taught you that dish, you’d have no reason to come home because you wouldn’t need me to cook it for you anymore’’

Aymann Ismail is a staff writer at Slate and host of the podcast Man Up, which digs into personal stories of identity and masculinity. He also made the award-winning series Who’s Afraid of Aymann Ismail?, in which he investigated America’s relationship to Muslim-Americans like him. He’s the seventh in a series of men we’ve interviewed about the dishes that — either through nostalgia or comfort — fill the soul.

I grew up in Jersey City, New Jersey, in a very insular, specifically Egyptian, Muslim community, which was both a blessing and a curse. There were four other Aymanns in my community, so I didn’t have to face the real world until after 9/11. Our community kind of fell apart — a lot of people stopped sending their kids to my mosque and to my school. I went from being one of a ton of Egyptian kids to being the only one at school.

Food was very unremarkable to me up until that point because everyone had and shared and understood their relationship to Egyptian food at home. Everybody brought their Egyptian packed lunches to the cafeteria to eat. We all had this baseline identity. So until that point, Egyptian food was just food, even though I was American. We’d still nag our parents for a Whopper from Burger King, of course, but the most gratifying meal was food cooked at home.

My mom is the best cook in the world. I say that with full confidence. Nobody else’s mom even compares. That’s just a scientific fact, like if we were to measure it. She could cook a different dish every day for the whole year. I even brought leftovers for everybody, packing a lunchbox with three or four different lunches, which my mom was happy to do so that I could hand them out to other kids.

Among the dishes that everyone always loved and asked for was her fried chicken. She originally made it specifically for me. That is, for a long time, I didn’t eat fish — I thought it smelled weird. So whenever my mom made fish for the family, she also made this fried chicken so that I could eat, too. But I had three other siblings, and we all competed like crazy to eat. The first thing we’d all always go for was the chicken. And my mom, being the person she is, would get up in the middle of the meal and make us more fried chicken once we ran through it like fiends.

I would hear the chicken cooking, and then I’d hang out by the kitchen and catch mama while she was pulling it out of the grease, one by one. Even now, I’ll walk back and forth from the kitchen, snagging one, tossing it in my mouth, coming back for another, and another…

This was basically an everyday part of life from the age of six or seven all the way to 18, when I was getting ready to leave for college. At that point, I asked her to teach me how to cook that chicken. She refused! She said, “No way.” I was confused. She’d taught my other brothers, and she knew it was my favorite. But she just said, “If I taught you that dish, you’d have no reason to come home because you wouldn’t need me to cook it for you anymore.”

That broke my heart, because I didn’t want my mom to think that her only relationship to me was built around food, but I understand why she felt that way. I kept a lot of secrets from my mom, mostly because she came from a different world than I did, and I was always worried about being misunderstood. So instead of telling her the truth and hoping that she saw things the way I saw things — or maybe empathize when I got in trouble — I remained silent. Her standard for a “good kid” was so much higher than who I thought I was.

And so, I didn’t tell her that I had friends at school who were girls, even though I wasn’t supposed to. I didn’t tell her that when I was out “playing basketball” sometimes we were just hanging out doing nothing. I wasn’t supposed to do that either. Sometimes I’d get on the train and go to New York City instead of school. So whenever we talked, I didn’t really open up to her emotionally. I wasn’t emotionally available for her in a lot of ways, which in hindsight I regret.

In the end, it took four or five times of me asking before she told me how to do it. And I still don’t make it as good as her, that’s for sure. Even when she taught me, she never told me the exact measurements for the spices and stuff. She just grabs stuff with her fingers and tosses it in.

These days, if I hear Arabic being spoken, it makes me crave that fried chicken. It’s not even a traditional Egyptian dish or anything. I just think of the sound of Arabic at home when I’m visiting my mom or when we were growing up, along with the audio of the Quran on a CD player in the background, next to her in the kitchen. That’s very triggering for me — when I hear the language and the sound of the breadcrumbs crackling in the pan. I can smell the lemon zest in the air just thinking about it.

I don’t want to think of a future in which my mom isn’t making this for me and the family. But the legacy of the dish, you know… If her kids don’t make it, who will? So I can imagine us getting together, just me and my brothers and my sister, and making it together as a sentimental kind of thing. It’s not a food that’s really present in Egyptian culture, so it’s more a family dish than something tied to my ethnic heritage.

I haven’t made it for myself in years, to be honest. My wife is vegan, and I try to respect that. But that doesn’t mean I don’t eat it often. I’m gonna have it this Sunday, when I go to see my mom. 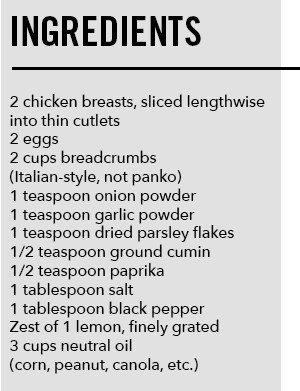 Combine all the spices, zest, salt and pepper in a small bowl. Sprinkle this mixture over the chicken cutlets, making sure each piece is seasoned evenly. Set aside. Whisk the eggs in a bowl until well-combined. Then pour the breadcrumbs out onto a plate.

Begin heating the oil over medium-high heat in a large pot or high-sided pan. The process from here is simple: You need to cover the cutlets in a coating of egg (throwing both into a gallon-size Ziploc bag works well), dip them into the breadcrumbs on both sides, press until they’re nicely coated, then gently lay them in the hot oil. You’re looking for about 375 to 400 degrees, if you have a thermometer, but the basic key is to have the oil hot enough to sizzle when you drop in the chicken — not so hot, though, that it begins to burn the breadcrumbs before the meat cooks through. It should only take 2 or 3 minutes to fry up golden and crunchy-crisp.

Serve immediately while the chicken is still hot. A little squirt of lemon juice is a nice accompaniment, but honestly, these cutlets are perfect by themselves.