‘Kimchi fried rice is a Korean dish, but the way I make it seems super Korean American. It feels like who I am — seemingly Korean but probably more American.’

Matthew Kang is a food writer and editor-in-chief of the website Eater L.A., which covers the massive culinary scene in and around L.A. He’s always been an L.A. guy, having grown up in the city and attended the University of Southern California. Kang is also the Korean-American son of immigrants and hosts the popular Eater show K-Town, which explores how Korean flavors warp and blend across the U.S. diaspora. He is the first in a series of men talking about the dishes which — either through nostalgia or comfort — fill the soul.

One memory I have is making kimchi fried rice in Japan, of all places. I just needed something that brought me home because I was homesick. I was traveling through Asia by myself and getting over a really bad breakup. It was a few years after college. I was engaged to this girl — it was really bad. So I totally did the Eat, Pray, Love thing before that movie came out. I was working at a bank and totally distraught, so I cashed out my 401k and decided to leave and go somewhere. I bought an around-the-world ticket deal.

Turns out, it wasn’t difficult to find the ingredients for this dish in Japan. So I made it in the way that I know how, and it was perfect. It helped. The funny thing is, I didn’t like kimchi that much growing up, even though it’s a staple Korean food. But eating it in fried rice was different. My mom used to make it, or I’d have it at restaurants. It just takes me back, even though I don’t think it’s a dish that, as a Korean American, you really treasure. I don’t think most moms would be bragging about it being their speciality, you know?

So the crazy thing with this recipe is that it calls for both butter and peanut butter. Which is wild. But it adds this incredible richness, and you cannot taste the peanut butter. Every time I make it, I stun people. It stunned me! I consider myself a cook and I love to fiddle with dishes, and this dish was the first I feel like I ever perfected after fiddling with all the ratios.

These days, it’s a Monday or Tuesday night dish for me and my wife, when I’m lazy and we don’t want to go out. Beyond that, the dish is grounding, a marker of my identity. Kimchi fried rice is a Korean dish, but the way I make it seems super Korean American. Just fatty and over-the-top. It feels like who I am — seemingly Korean but probably more American.

My dad would love it. My mom would probably tell me it’s not good for my health and only take one bite (laughs). I can put down a huge portion when no one’s looking, but I try to limit myself. A small bowl helps. 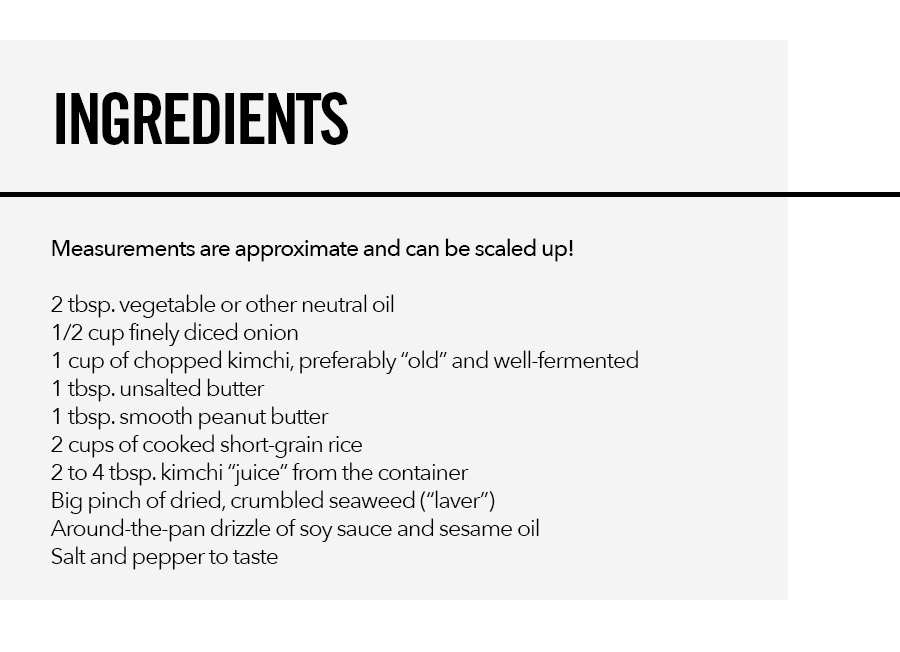 Heat a small pan, preferably nonstick, over high heat and add the neutral oil. Once the oil is shimmering, toss in the chopped kimchi and sauté until the cabbage begins to darken and caramelize. Then add the butter and peanut butter, stirring so the paste melts and coats the kimchi. Crumble in the rice and toss vigorously to combine, then add the kimchi “juice” to help break up the rice granules and moisten the ingredients. Keep tossing until the rice is evenly mixed and fried. Lower the heat and add the seaweed and drizzles of soy sauce, sesame oil and salt and pepper. These should be added to your taste, so start with a smaller amount and re-season. Mix one last time and eat.