What Does My Dog Think Its Name Is?

Theories from a dog namer, an animal behaviorist, a dog name researcher and an animal psychologist

Parenting a pet, no matter what kind, can be a frustrating and bewildering experience. Animals can’t tell you what they want and need (directly, at least), so we’re here to help you answer any questions you have about your favorite companion — whether they be furry, slimy, feathered, scaly or anything in between — with insight from the experts. This is “Basic Bitch,” an advice column for pet parents who just want the best for their best friend.

I rescued my dog from a shelter, where the employees had named him Sonic, presumably because he enjoys running around in circles at tremendous speeds. My girlfriend and I wanted to give him another name, though, one that was more personal to us and accentuated his character. So, after living with him for a few days, we each wrote a list of potential names, and only one of them appeared on both of our lists: Tucker, an allusion to him being tuckered out after all that zooming.

His name has been Tucker from that moment on, and he took to it almost immediately. (Nowadays, we laugh at the fact that his name was, at one time, Sonic.) But I sometimes wonder if he remembers, or even misses, his old name. Or, perhaps he really loves his new one? Then again, does he even understand that he has a name, or just some sound that means we want his attention? 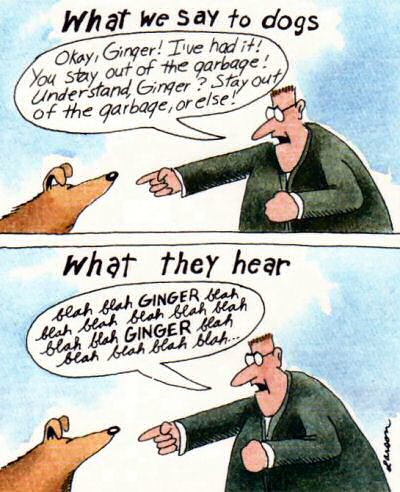 Basically: What do dogs think their names are, and do they care if you change them? Speaking of which, what do they think words are, anyway?

Jessi Larson, of My Dog’s Name, an online resource for helping owners name their dogs: Dogs have been given names ever since they were domesticated thousands of years ago. Through years of conditioning, they’ve learned that their name is the word for them — and that they must respond when it’s said. This doesn’t mean that they think, “I’m a dog named Rover.” But it does mean, if they hear the word “Rover,” they know someone’s referring to them.

Dogs don’t think of themselves in terms of a name. That would require the use of language, and that’s something dogs obviously aren’t capable of. They do, however, have a strong concept of self, albeit without a name. Dogs also recognize other individuals, but through appearance, sound and smell. So, for example, my dog doesn’t think of me as “Jessi,” but as the woman who takes care of him and looks, sounds and smells a certain way.

Overall, dogs are very intelligent for an animal species. According to psychologist and dog researcher Stanley Coren, the average dog’s intelligence level is roughly the same as a two-and-a-half-year-old baby. This means that they have the ability to remember a large number of words. It varies by dog, of course, but it can range from dozens of words, at minimum, to hundreds or even a thousand, depending on the canine.

As far as changing their name goes, dogs don’t have the same sense of identity with their name, nor the attachment to it that humans do. To dogs, it’s just a sound people make when they want their attention. This means it’s perfectly okay to change a dog’s name — you just have to make sure you train them properly.

If you want to change a dog’s name, you’d follow the same steps for teaching a dog their name in the first place:

Jennifer Verdolin, animal behaviorist and author of Raised by Animals: A dog doesn’t necessarily know its name is “Jim.” There are certain ways that [names we give them] sound, and they recognize those sounds. But to be named “Jim,” “Bob” or whatever doesn’t mean anything to a dog.

If you change a dog’s name, it might take some time for the dog to realize that’s now the thing it needs to respond to. But it’s not going to be like, “Wow, I really loved my previous name.” That’s a bit of a case of putting our own attachments or identities, which are so driven by our names, on to other species. They don’t care that we even call them dogs, or canines.

So, whether or not a dog would respond to a new name, or how fast it responds to a new name, would most likely depend on how quickly you train it to respond to a different voice command — it’s a voice command, just like “sit.” We could replace “sit” with “roll over,” but teach them to sit and just call it “roll over.” And then, every time we say “roll over,” they sit. It’s not because there’s a fundamental understanding of the words “roll over” and “sit.” We’ve just trained them using those verbal cues, and that’s very similar to people: We call an apple an “apple,” because we’re taught that it’s called an “apple.”

They have their own words that they use, too. We’re learning now that their barks and sounds have meaning. For many, many animals, all that use vocal communication of some kind, it’s not just meaningless jibber jabber. In fact, if you reverse the order of sounds, much like we’d reverse the order of words in a sentence, it then becomes jibber jabber for the animals. So, they have their own signature voices, which is how they might recognize each other. When one barks, howls or yips, everyone knows who that is.

In terms of naming, dogs use multiple identifiers for individuals. They’ll use sound (a signature sound). They have your smell (what you smell like). And what you look like. We have the same thing as humans — we have our own signature smell, we have the way we look and we have our own sound — and it’s just a cultural thing that we give names. In fact, historically, names were given based on traits or characteristics of a person, and many names that we currently use have that embedded in them. Children learn their name because we call them that, not because they’re born with an inherent need to have a name. It’s the same thing for dogs. 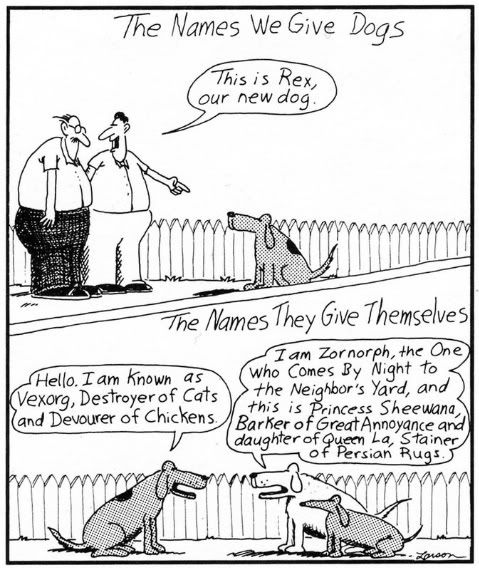 Amritha Mallikarjun, a canine researcher who studies the power of dog names: Dogs associate their names with positive emotions, and they know that their name is often said in their presence, but there’s no evidence that dogs understand the self-referential nature of names. We also don’t know if dogs care about us changing their name, but if you do change a dog’s name, you’ll have to rebuild positive associations with their new name.

Zazie Todd, animal psychologist and author of Wag: The Science of Making Your Dog Happy: Most dogs get pretty good at recognizing their own name, and they learn to pick up on other words or phrases that have consequences for them, like, “Shall we go for a walk?” We usually try and teach them some important words, like “sit,” “down,” “come” and “drop it.” The best way to teach commands like this is to do positive reinforcement training with food as a reward, but typically, we’d start with a hand signal and then move to a verbal cue. Over time your dog learns that when you say “sit,” that sound means that, if they sit, they’ll get a reward. But sometimes dogs are picking up on other cues, too, such as body language and whether you have a treat in your hand, so they might try sitting simply because that’s what usually earns them a treat.

If you want to change a dog’s name, the thing to do is say the new name, followed by the old name. Pretty quickly you’ll notice they start responding to the new name. Of course, whenever you want a dog to pay attention, it helps to have something that will motivate them, like a treat or a game of tug.