Do Dogs Feel Guilty When They Puke on the Carpet?

Advice from a dog behaviorist, a dog psychic and a dog scholar

Parenting a pet, no matter what kind, can be a frustrating and bewildering experience. Animals can’t tell you what they want and need (directly, at least), so we’re here to help you answer any questions you have about your favorite companion — whether they be furry, slimy, feathered, scaly or anything in between — with insight from the experts. This is “Basic Bitch,” an advice column for pet parents who just want the best for their best friend.

My dog, Josie, loves eating, and she eats, well, just about anything she can get her paws on. As much as I try to stop her from licking up sidewalk rubbish during our walks, there are times where she succeeds. Related or otherwise, she occasionally pukes on my beautiful carpet, which, it happens, and I own a steam cleaner, so no problem. Funny thing is, she always gets this guilty look on her face afterward. I try to reassure her with plenty of belly rubs, but I wonder where she learned to feel bad about that, if she actually does. 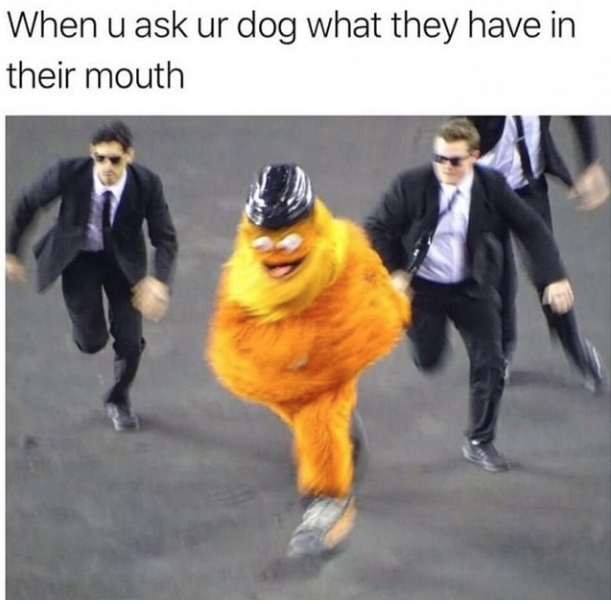 Basically: Do dogs feel guilty when they puke on the carpet? And, um, can dogs even feel guilt?

Jennifer Verdolin, animal behaviorist and author of Raised by Animals: There are a few things to think about here: First is that our pets cue into the facial expression and tone of voice that we use around them. They recognize smiling, friendly humans just as easily as they do upset, angry ones. The “guilty” look is really about responding to what we’re projecting and not necessarily what they may have done. If the act and us being upset are separated by any sliver of time, they may not even know what we’re upset about, only that we’re upset.

What we’re seeing is their emotional reaction to us being upset, whether it’s confusion, anxiety or fear. A study in 2014 evaluated this and confirmed that whether or not the dog actually did something wrong wasn’t a predictor of the “look.” The only predictor was being scolded (tone of voice, facial expression). We also know that dogs evolved special facial muscles (which wolves don’t have) that help them create facial expressions specifically for communicating with us, much like cats did with the “meow.” The woe-is-me, puppy-eyed look may have just come about as part of the human-dog relationship.

Laura Stinchfield, pet psychic and author of Stormy’s Words of Wisdom as well as Voices of the Animals: It really depends on the personality of each individual pet and the environment of the home. Some animals would be mortified that they threw up on the carpet, while others wouldn’t care at all. The animals that like to be beautiful and well put together are the animals that would be mortified. I have a poodle and a cat that pride themselves on being clean — they’d feel terrible if they didn’t throw up at a place that could be easily cleaned.

Some animals wouldn’t care themselves, but would care because their owners cared: For instance, a more ranch-type dog that lives in a home with someone who loves white carpet. The dog doesn’t care, but they care for their people. Then there are the pets that are just sick and know their people love them. They’re sorry, but they know their people will clean it up because everyone just feels bad that the animal got sick. So they don’t feel guilty. Finally, there’s the dog or cat that really just doesn’t care at all and figure their people will clean it up, and if the people yell, they just think it’s a human problem.

Think of animals a little like different types of children: It depends on the environment and their individual personality. Also, you have to take into account human body language: If a human acts upset, the head-down and walk away of an animal may not be guilt — it may be fear or submission, because their humans are exhibiting erratic or dominant behavior.

Just for fun, I’ll ask my chihuahua mix, Felix, this question. (I picked him because he’s the closest to me at the moment.) Felix says, “I feel animals feel guilty when their humans are upset. Animals know when they have made their humans upset. I don’t care about the carpet, but I would care that I upset you. I’m glad I haven’t thrown up lately.”

Mark Derr, dog expert and author of How the Dog Became the Dog, Dog’s Best Friend and A Dog’s History of America: The assumption underlying this question seems to be that dogs feel guilty in some way about behavior that humans find distasteful — in this case, throwing up on the carpet. I don’t think dogs feel guilty about this, or any other behavior, the way a human might. However, the dog could be putting on a certain face in anticipation, because it’s learned to do so in response to its human caretaker’s reaction to its behavior.

Vomiting, of course, is a natural behavior in most animals, intended to get rid of unwanted substances. In canines and birds, it’s also a necessary part of feeding the newborn.

There are many reasons a dog might vomit, all of which should put their human caretaker on notice that something serious might ail the dog. So, assuming it’s a one-off affair, you might, rather than asking whether the dog feels guilty, examine the vomit itself for foreign substances — e.g., a piece of a rubber toy, a bone, wood or the cover of your favorite dog book. If [you find anything], you should immediately take the dog to the veterinarian to find out the extent of the foreign object and its danger in passing through the intestines to the health of the dog. If there’s plant material in the vomit, it could be toxic. If the vomiting is repeated behavior, and you haven’t examined the vomit, you should probably do so without question the next time your dog throws up.

It would seem possible that the dog might throw up on your favorite rug because he or she is pissed for being left too frequently for too long a time, but that’s a judgment best left to a veterinarian trained in dog behavior. Plus, I suspect most of those cases involve defecation.