Early on in Dirty Rotten Scoundrels, a two-bit American con artist named Freddy Benson (Steve Martin) is having a conversation with Lawrence Jamieson (Michael Caine), a posh British con artist who’s keeping his identity secret from this man he’s just met. Freddy isn’t aware how much they have in common, and so he’s proudly lecturing Lawrence on the fine art of the hustle. Lawrence witnessed Freddy conning a rich older woman into buying him an expensive meal, but Freddy insists he has no compunction about fooling her.

“I tell ‘em what they want to hear if it gets me what I want,” Freddy explains.

Keeping up his ruse, Lawrence responds, “Rather a shabby trick, isn’t it?”

Freddy just looks at him smugly. “I can tell you’ve got a lot to learn about women.”

Thirty-one years after its release, Dirty Rotten Scoundrels is back in the culture’s consciousness thanks to this Friday’s release of The Hustle, which is being advertised as a female-led remake of the 1988 comedy. “Honestly, the movie’s a classic so you’re not going to be better,” Hustle star Anne Hathaway recently told Entertainment Weekly, later explaining how the new movie differs from the Martin-Caine film. “[W]ith Dirty Rotten Scoundrels, they were playing into women’s romantic ideas about men and they were kind of taking advantage of silly women — we’re taking advantage of men who have actively harmful ideas of what women are. So I do think maybe, in that sense, it’s a little more pointed.”

The Hustle hasn’t been screened yet for critics, but it’s interesting to hear Hathaway’s take on Dirty Rotten Scoundrels, which was itself a remake of the 1964 con comedy Bedtime Story. (David Niven was in the Caine role, while Marlon Brando was that film’s Freddy.) Directed by Frank Oz, Dirty Rotten Scoundrels can certainly be read as a satire of “women’s romantic ideas about men,” but rewatching the film recently, I think it’s also very much about what Hathaway claims The Hustle is. In Lawrence and Freddy, Oz and his stars gave the world two expert con artists with warped views of the women they’re targeting. These crooks aren’t just battling to see which of them can swindle a soap heiress — they’re testing which of their dueling strategies for wooing the fairer sex is most effective. Turns out, neither knows as much about women as he thinks he does.

In that same conversation early in Dirty Rotten Scoundrels, Freddy lays out his case for why he likes going after rich women. “We’re the weaker sex,” he tells Lawrence. “Men don’t live as long as women. We get more heart attacks, more strokes, more prostate trouble. I say, it’s time for a change. I say, let them give us money. Let’s live off them for a while.”

It’s a misogynistic attitude born out of Freddy’s resentment that men are expected to be breadwinners and protectors, but because the eminently likable Martin delivers the lines, they play as funny and absurd as opposed to monstrous. Still, Freddy reveals his chauvinistic streak from the get-go, not realizing that his new friend is in the same business — and has a similar, albeit more refined and conscientious approach.

While Freddy targets women by playing on their sympathies — his shtick is he’s the sweet, sappy guy whose beloved grandmother is dying — Lawrence pretends to be a weary, heroic nobleman who needs money to help finance his anonymously foreign nation’s war with the Communists. If Freddy is a sad-sack preying on women’s weakness for sensitive, helpless, puppy-dog men, then Lawrence appeals to their fascination with elegance, dignity and aristocracy — with the dashing man fighting for a honorable cause who’s tormented by the burden of his responsibility.

With either crook, though, the con is basically the same: Oh no, I couldn’t possibly accept your help … I’ll struggle manfully on because I must … Oh well, if you insist… They trick women into thinking that they’re lowering their guard, swallowing their pride and bravely allowing a female to save them. Freddy and Lawrence shrewdly subvert macho stereotypes to make themselves seem unthreatening — all the easier to strike, you see. (From what we can gather, the seduction often leads to the boudoir.) Lawrence insists that he’s more principled in his conning — “[My targets] are wealthy and corrupt,” he informs Freddy late in the film. “I don’t take advantage of the poor or virtuous.” But they’re both capitalizing on old gender stereotypes to get rich and get laid.

Sex, sexuality and male rivalry are all over Dirty Rotten Scoundrels, but Oz slyly underlines an unspoken anxiety at the heart of Freddy and Lawrence’s competition to swindle Janet (Glenne Headly), a wealthy, sweet-natured young woman who arrives in the South of France, unaware that these two jackals are descending upon her. Lawrence detests Freddy’s uncouth manner, while Freddy resents Lawrence’s pretentiousness, but nonetheless they’re drawn to one another — partly because each man possesses a quality that the other lacks — and Oz occasionally hints at a slight sexual tension between them. To be sure, Dirty Rotten Scoundrels never suggests that these two men are secretly in love with one another — after all, this is a 1980s Hollywood studio movie — but Oz gets a kick out of framing them on screen in ways that make us think about them as a couple. 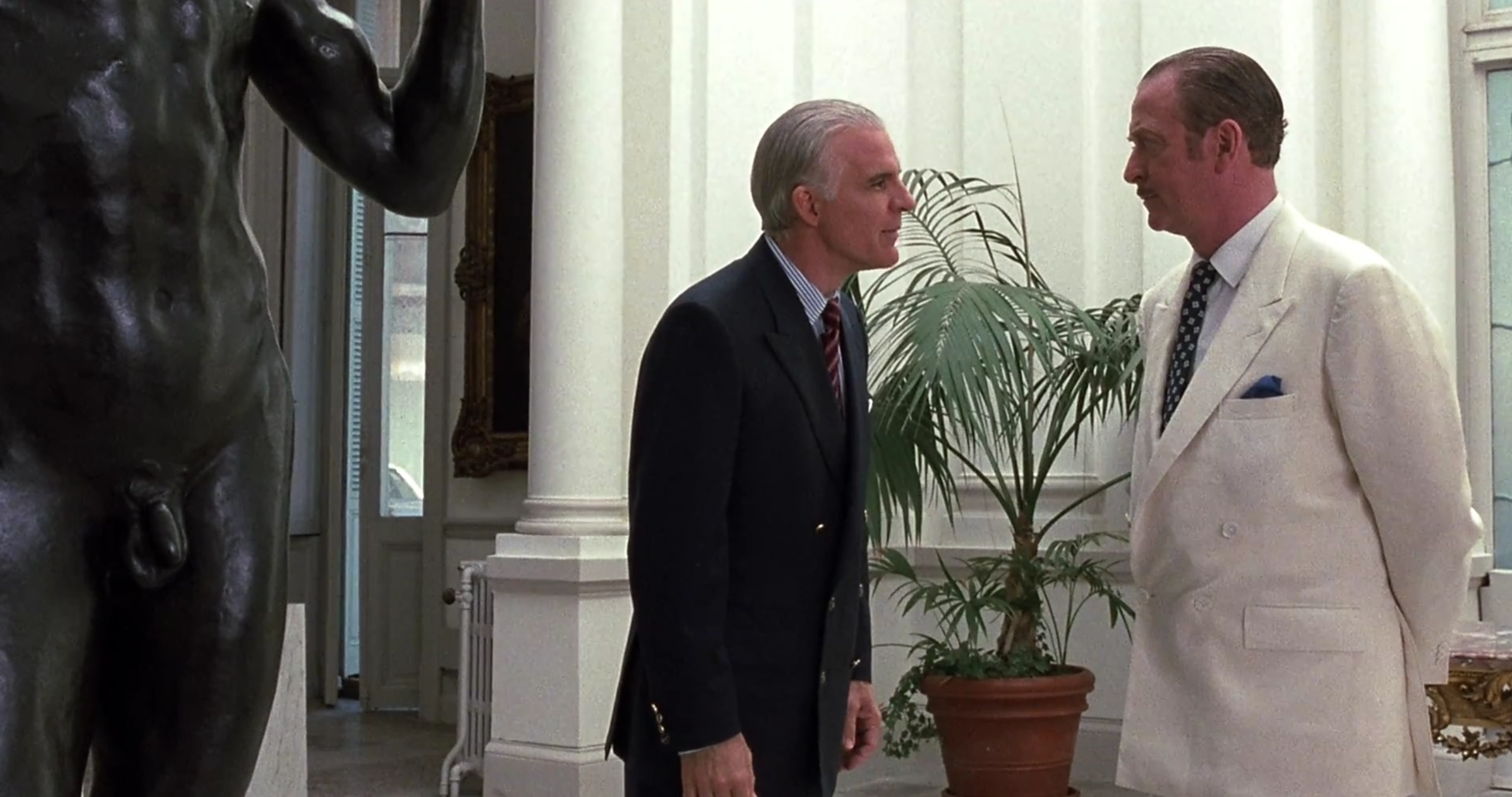 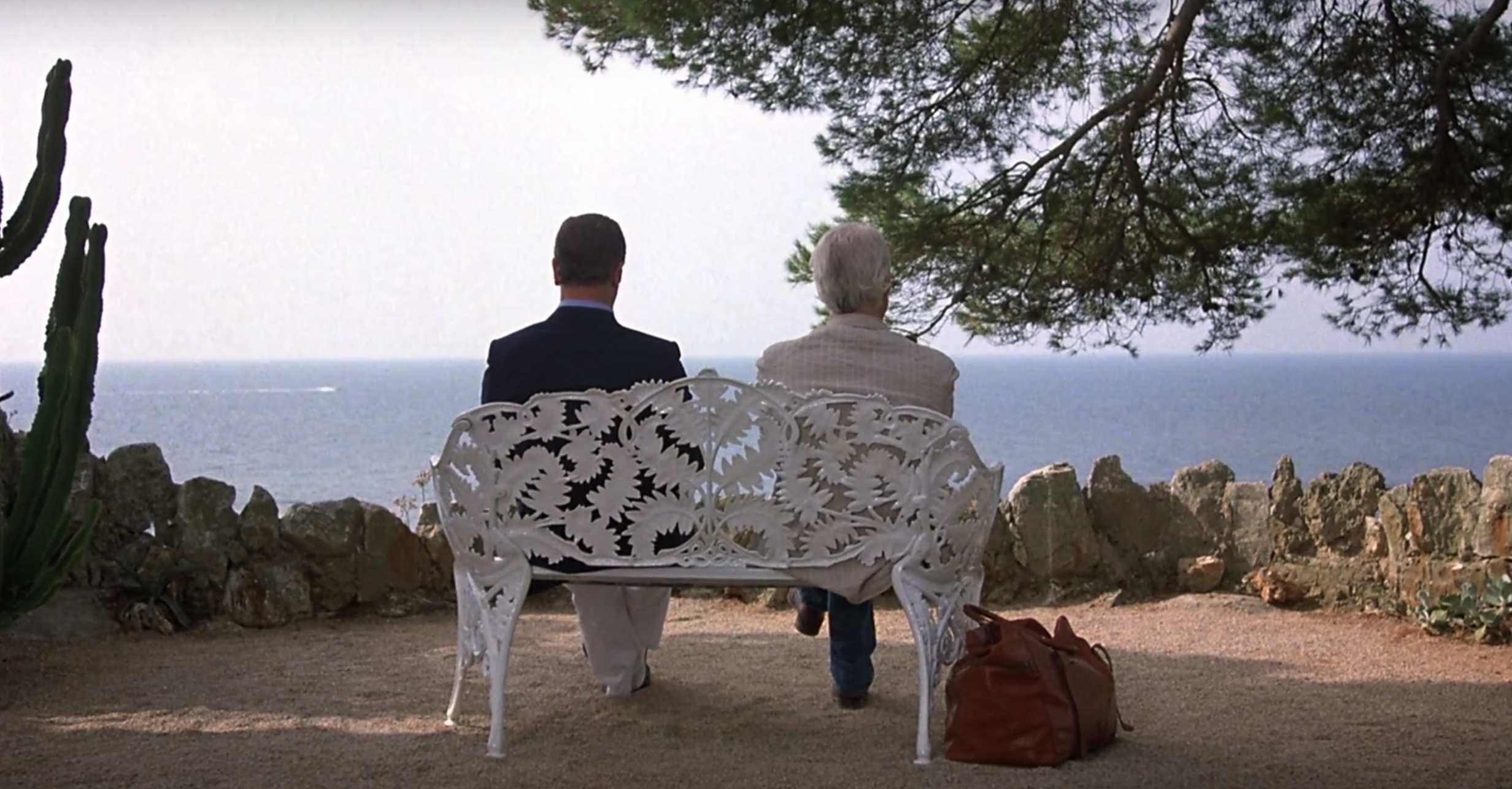 This notion is perhaps strongest when, after a scene where they’re yelling at each other, the camera holds tight on their faces, the two men silent as they realize they’re standing uncomfortably close. For the tiniest flicker of a moment, it’s almost as if Freddy and Lawrence could kiss, but instead they just glare. They’ll work out their complicated feelings in other ways. 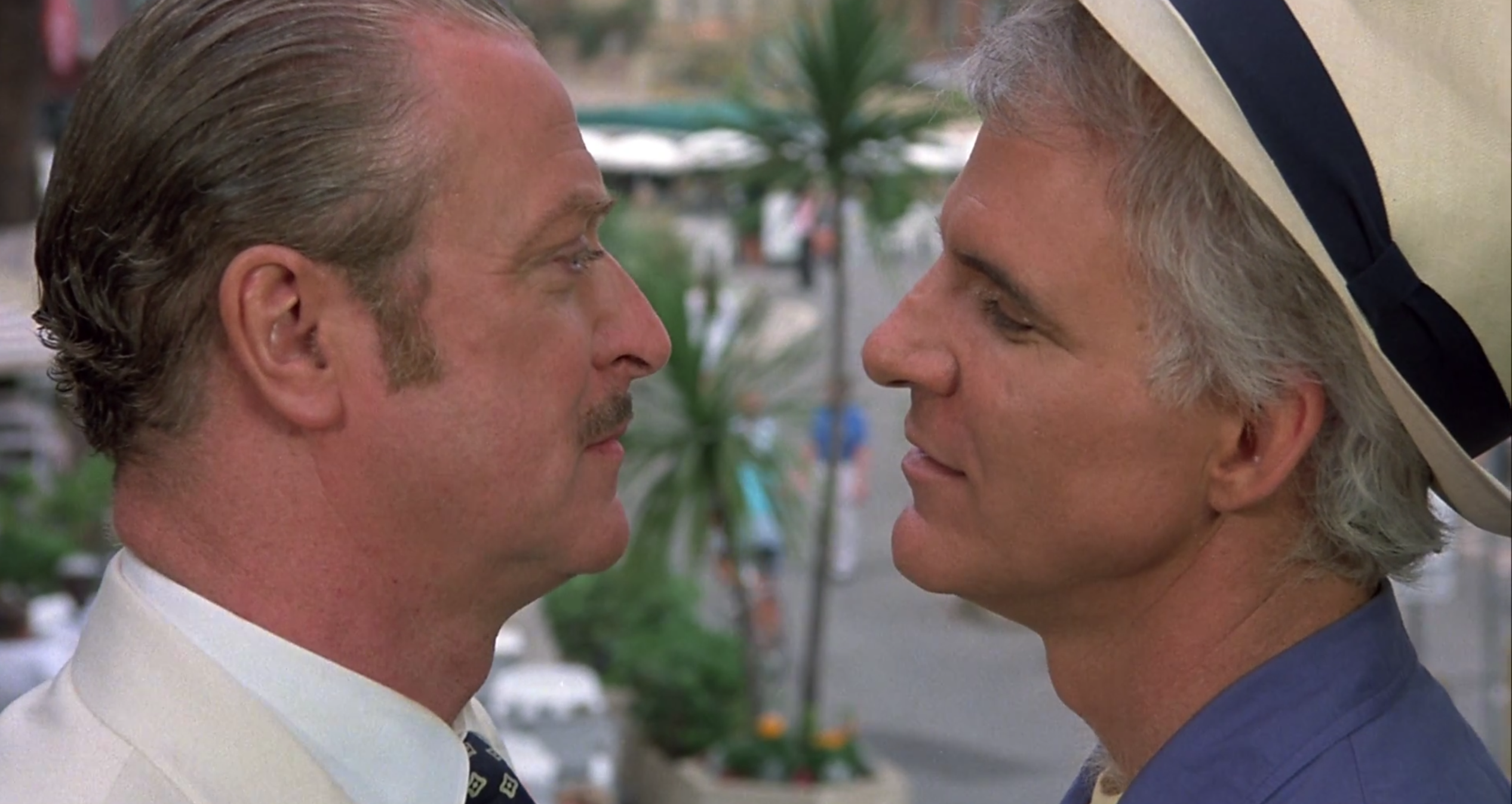 Once Janet enters the picture, Freddy and Lawrence use her as the prize in a bet: Whichever man can extract $50,000 from her first wins, and the other has to leave the Riviera for good. Freddy’s scheme is to playact being a naval officer who is relegated to a wheelchair after being traumatized by seeing his fiancée dance with another man. (Before the ubiquity of the term “cuck,” Freddy used it as his con.) Meanwhile, Lawrence turns himself into Emil Schaffhausen, a brilliant psychiatrist from Liechtenstein who alone can cure Freddy of his psychosomatic ailment. As Emil, Lawrence is suave, cultured and sophisticated. While Freddy takes advantage of Janet’s compassion, Lawrence wants to seduce her with his cosmopolitan charm and intelligence. They’re each cynically reshaping themselves into the type of man they assume Janet can’t resist.

Freddy and Lawrence both want to win the bet, of course, but they also want to sleep with her — or, in the case of Lawrence, make sure that Freddy doesn’t sleep with her. “A woman like Janet would never give herself to a man like you,” the prim-and-proper Lawrence dryly informs Freddy, aghast at his younger rival’s horn-dog demeanor. The more Lawrence gets to know Janet, the more he’s touched by her genuineness — and he doesn’t want to see Freddy despoil it. Lawrence is attracted to Janet, but he’s also protective of her — paternal, even patronizing.

With its cruel manipulations and characters’ narrow view of the fairer sex, Dirty Rotten Scoundrels serves as a gentler, more crowd-pleasing precursor to the portraits of hideous men that Neil LaBute started crafting the following decade in films like In the Company of Men, which is also about bad guys trying to trick a woman into falling for them. But if The Hustle does end up flipping the script, allowing Hathaway and costar Rebel Wilson to “[take] advantage of men who have actively harmful ideas of what women are,” what’s so rewarding about Dirty Rotten Scoundrels is that it ultimately achieves the same objective.

Especially watching the movie in 2019, it’s enormously appealing to revisit Janet’s terrific gotcha of Freddy and Lawrence. The whole time, it seems that she’s the film’s kindly dupe — only at the end do we realize that she’s been playing the long con, earning their trust and then milking each of them for $50,000. These men were so wrapped up in their own competition — each trying to prove themselves superior at tricking a seemingly helpless lass — that they never expected that they were being deceived the entire time. When the con is finally exposed and Janet flies off with their money, Freddy is furious, but Lawrence watches her plane zoom away with an admiring look on his face. He had underestimated her — she’s earned his respect by making him recognize how shortsighted he was.

Headly died in 2017 at the age of 62, and her absence adds a pathos to Dirty Rotten Scoundrels that wasn’t evident back in 1988. Strangely, though, that sentiment only makes the film’s comedy and underlying themes more potent. Like Freddy and Lawrence, we view Janet with something resembling pity — that poor woman at the mercy of these conniving men — and so we don’t quite anticipate what she has in store for us. At the time of Dirty Rotten Scoundrels’ release, Martin and Caine were the much bigger stars, and so it was natural to focus on them during the film. But while they’re both quite funny, it’s Headly who’s the real revelation.

For the entirety of the film, she’s performing the most intricate con — she has to convince us that Janet is the ideal mark without ever raising our suspicion. I remembered how Dirty Rotten Scoundrels played out, but her performance never makes the switcheroo obvious. It’s marvelous work — in part because, like Freddy and Lawrence, she’s playing with gender stereotypes. While her male counterparts have crafted versions of unthreatening men, Janet playacts the perfect innocent waif who’s waiting for a man to complete her. With the lightest touch, she’s secretly an avenging angel delivering payback against all the dirty rotten scoundrels who have manipulated women’s emotions for their own gain. I’ll be curious to see how the new film satirizes these gender tropes. But Headly’s hustle is awfully satisfying all on its own.