I’d be lying if I said I ever had much of a grasp on the plot of HBO’s Deadwood. The density of language and intrigue in David Milch’s prestige period drama, which follows the evolution of Deadwood, South Dakota, from a mining camp to incorporated town, is such that mood and atmosphere take primacy: The American frontier of the 1870s is painted with blood, mud and booze. As far as what the characters actually say, what sticks with you is the swearing: Over three seasons, according to one tally, they uttered 2,980 fucks, which comes out to an average of 1.56 fucks per minute of screen time. They once spat 137 fucks in a single episode. There’s no escape from it.

People disagree over how big an anachronism this kind of profanity is, but it no doubt conveys how shockingly obscene a pioneer outpost might’ve sounded to a city-dweller of that era. The focus of Deadwood — and countless westerns before it — is an examination of humanity in a virtually lawless state, and the coarse dialogue is a texture that continually reminds us we are on the edge of the wild. That said, not all cussers are created equal, and there can be no debate as to the best. He is the show’s prime villain and arguably its raison d’être: Al Swearengen, whose very surname seems to derive from his facility for baroque verbal filth. Played by the British actor Ian McShane, whose rich, menacing purr has elevated the word “cocksucker” to the Shakespearean plane, Swearengen came to define Deadwood and a certain vision of masculine authority.

Swearengen was a real person — the pimp and proprietor of Deadwood’s Gem Theater, a brothel-saloon. As with its other historical figures, the series preserves such details while fictionalizing others; McShane’s Swearengen, for instance, is English-born, and occasionally disparaged as a “limey,” so that his expletives end up feeling like an assault on the American stereotype of Brits as polite tea-drinkers. He rules the camp in the way of a mafia boss as de facto mayor, seeing to it that the right people are manipulated or murdered in order to preserve a delicate status quo, which means that his swearing is never merely that — it’s invective that carries a genuine threat of violence.

Swearengen’s opposite number is Seth Bullock, Deadwood’s first and highly reluctant sheriff, portrayed with a flinty glare by Timothy Olyphant. In keeping with his moral rigidity and tight-lipped demeanor, Bullock is not a prolific cusser, preferring to telegraph rage via stony silence. Make no mistake, that anger is there, and it can explode; being the taciturn “good guy,” however, often means letting Swearengen talk circles around him. McShane and Olyphant are technically co-leads, but it never feels that way, because Swearengen dominates the screen. It’s one of Milch’s many fun subversions: Whereas old cowboy movies valued men of few carefully chosen words as the speakers of truth — a truth that is simple, clear and close to the bone — Deadwood is about conscious complexity and change, and Swearengen is its voice, ever adaptable, torrential. The blasphemies that pepper his speech stand for the wrinkles or vagaries of fate, the endless fuckin’ complications that afflict one’s being. Somehow they deepen the profundity of his brutal wisdom: “Some shit’s best walked through alone,” he quips.

Thus do we delight in Swearengen’s performance as both high and low art, and perhaps the only honest expression of the rapacious American id. Whereas Bullock holds everything back, Al is unfiltered, and it’s hard to imagine a moment when he’d hesitate to say what he thinks. He need not even swear to make us feel the icy blade of his wit: “You can’t slit the throat of everyone whose character it would improve,” he laments. Sometimes it is a crass juxtaposition, not the vulgarity itself, that scandalizes, as with his pronouncement on some grisly murders outside of town: “God rest the souls of that poor family… and pussy’s half price for the next 15 minutes!” The boyish fantasy is that we, too, could achieve this sordid, seemingly effortless eloquence if unchained from the norms of polite society. More likely, we’d be the guy sweating and stammering as Al finds a dozen new ways to call him a degenerate waste of skin. That’s just how it is. 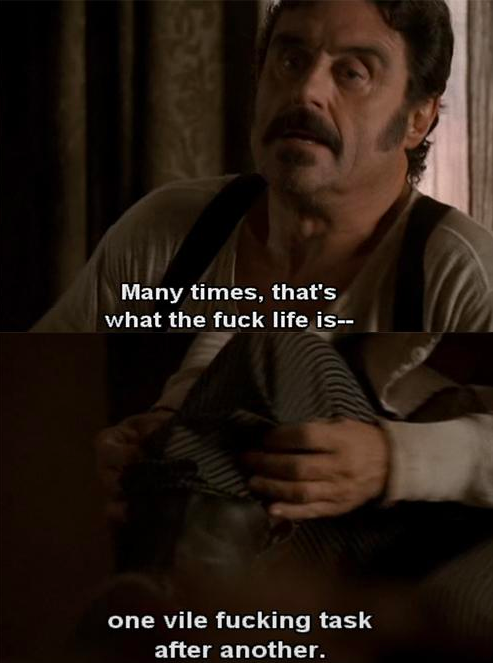 Still, for all his hostility, the cursing lets us know he’s not exactly bitter — that a sour humor animates his philosophy and ruthless ambition. Praising Swearengen as a finer and funnier mastermind than you typically get in TV or film, writer Heather Havrilesky notes that he was a “deeply damaged realist who could still savor his own improvisational leaps.”

He still is, I hope; I have not yet seen the new Deadwood movie that will at last bring this dirty saga to a conclusion. Without this glimmer of amusement, it would be dismal entertainment, as our admiration for Al hinges on this willingness to tell anyone or anything — the sheriff, the government, the universe — to kiss his ass. That way, even when matters elude his control, he remains on top, defiant and raving to his last. Deadwood may be a show about how civilization organizes itself, but Swearengen, in his mad creativity, hints that we need a measure of chaos to thrive.