The ‘​Conjuring’ ​Movies Are Hollywood’s Most Underrated Franchise

Because of the pandemic, we’ve essentially taken a year off from franchises, those pricey blockbusters that are normally the movie industry’s main event. No James Bond, no MCU, no Fast and Furious: Outside of Wonder Woman 1984, we haven’t had to think a lot lately about intellectual property and, frankly, it’s been nice. But where other franchises lumber around, parading their life-or-death stakes and gaudy CGI, there’s one underrated series of films that quietly go about their business, boasting an old-school classiness that’s rare in modern Hollywood. And starting Sunday, the two best installments will be streaming on Netflix. Isn’t it time you revisit The Conjuring and its sequel?

When the first film opened in the summer of 2013, it wasn’t necessarily pegged for greatness. Sure, The Conjuring starred Vera Farmiga and Patrick Wilson, was directed by James Wan (who had helmed Saw and Insidious, the latter also starring Wilson) and was based on the lives of paranormal investigators Lorraine and Ed Warren, who had been the inspiration for another true-life horror film, 1979’s The Amityville Horror. And yet, despite all those enticements, The Conjuring didn’t entirely align with horror trends of the time. Tonally, it was a very throwback tale, set in the early 1970s, about the Warrens as they try to help an imperiled family (led by Ron Livingston and Lili Taylor) whose house is haunted. There was no found-footage conceit like the Paranormal Activities movies. Not a huge amount of gore. Hell, the film’s elegant dread seemed more indebted to 1960s and 1970s horror like The Haunting and The Exorcist than torture porn.

But, of course, all of those differences are what ultimately made The Conjuring so effective. By focusing on a naturalistic approach — lived-in performances, a de-emphasis on jump scares, an air of believability to everything that occurred — Wan made a ghost story that was supremely moody and somber. “The nature of what this film is, and the fact that it’s based on people’s stories, I want to honor that as much as I possibly can and ground it in reality as much as I possibly could,” he said at the time. “And also, it’s a period film, as well, and I want to stay true to all of that.”

And yet, there’s nothing stuffy about The Conjuring — ask anyone scared silly by it. Rather than leaning on horror gimmicks, the movie is really a character study as we watch this terrified family try to hold together while the Warrens do their best to get to the bottom of what’s going on. You rarely care about the people in horror films as much as you do here, and the performances are all so stripped-down that the characters seem like regular folks in a horrifying situation. Farmiga and Wilson are especially good as a married couple who have devoted their lives to this strange profession — you get the sense of two people in love who have a mutual respect for one another, putting themselves in danger in order to help others. Equal partners in this nerve-racking enterprise, the Warrens are like a great crime-fighting duo, except they’re out to bust some ghosts. For a movie with such effective fright sequences and suffocating anxiety, you wouldn’t assume that The Conjuring would also be a portrait of an enduring romantic relationship, but it sorta is.

That bond is even more threatened in the sequel, which came out three years later. The Conjuring was a massive hit, and Wan stayed true to the spirit of what made the first film so successful. Again, the Warrens help an everyday family battle a spectral being. (Frances O’Connor is terrific as the matriarch of this haunted clan.) And again the Warrens are in danger — Lorraine is a psychic, and as the movie starts, she’s struck by a vision that her husband will die. Will this new investigation lead to Ed’s doom? Anybody who pays close attention to how franchises work will guess the answer, but The Conjuring 2 is so spooky — and the rapport Farmiga and Wilson have is so strong — that you do sit there actively worried about what will happen to him. 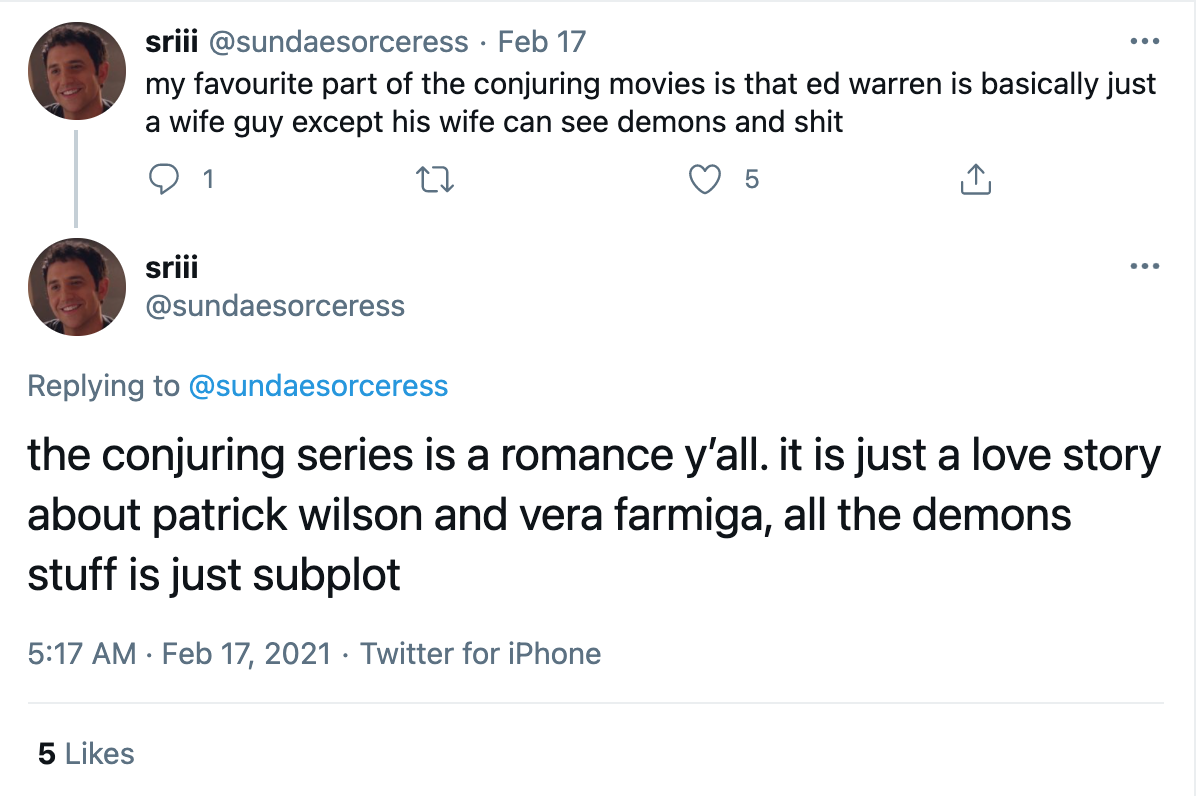 The Conjuring 2 made even more money than the first installment, and in the meantime Warner Bros. started putting together a Conjuring Universe, ordering spinoff films that weren’t as strong but still mostly maintained the no-fuss style of the flagship movies. There have been three Annabelle movies — all about the creepy doll we met briefly in The Conjuring — as well as The Nun (who was part of The Conjuring 2) and The Curse of La Llorona, which shares a peripheral character with the Conjuring movies.

But as with all studio properties, these spinoffs tend to undermine what was so great about the first film. For one thing, they don’t have Farmiga and Wilson, who hold these movies together through the sheer affection their characters have for one another. (They show up in 2019’s so-so Annabelle Comes Home but for not nearly long enough.) Of all the big franchises, the Conjuring Universe is the only one that has anything substantial to say about marriage. That shouldn’t be a surprise — most blockbusters are geared to viewers too young to be thinking about settling down — but it’s part and parcel with these films’ grownup vibe that they’re about working parents balancing their personal and professional lives who still dig each other after all this time. No wonder fans have gravitated to the couple as much as they do the horror elements. People just really love Lorraine and Ed.

“We didn’t get the opportunity to meet Ed [who died in 2006], but we see their chemistry through Lorraine and the way she speaks about him,” Farmiga said around The Conjuring 2. “It’s really beautiful and really intense and ordained. Their partnership was really holy, in that sense. … That affects our performances. We knew they had an incredible love and partnership. So, we had no choice but to try to recreate that.”

A third chapter, The Conjuring: The Devil Made Me Do It, will supposedly be coming out this summer. I’ve missed these lovebirds — in the meantime, watch the first two films on Netflix. Lorraine and Ed’s passion for one another will warm your heart, while the movies’ sophisticated scares give you a chill.