Burning Down the Neighbor’s House

In rural Kansas, the neighborly thing to do when a local farmer goes belly up is to set everything they owned ablaze

Over the last decade, my Kansan family and I have burned roughly five empty farmsteads to the ground. In each case, we waited for a soggy day so that we didn’t accidentally start a prairie fire — after all, in this arid, treeless part of the world, grass fires can be devastating. Sometimes then we had to wait for months for the perfect day to set things ablaze, basically one with a gulf wind that saturated the air with enough moisture that it was more or less impossible for the fire to get out of control.

We called farmstead number five the Old Magie Place for the people who once lived there. (Locals also knew it as “Skunk Hollow.”) I never knew these particular Magies, but some of their relatives are still around, and are part of the nearby farming community of Healy, which is home to the smallest school district in the state of Kansas, with a high school enrollment of less than 25 students. The Magies had been gone for decades by this point (circa 2009), and their farm house had become a refuge for wild animals and trespassers looking to drink light beer and break shit. As such, there were little piles of crushed cans, liquor bottles and cigarette butts throughout.

Near the house was fencing around the gardens, which I ripped out with a loader tractor. I demolished the other small barns on the property partly by hand before bulldozing them into a pile to burn. The farm ground all around the house was fallow and not in use. We would till it up later, but first, the house and barns needed to be dealt with.

When I’m out driving the backroads of western Kansas, there’s an empty home like the Old Magie Place every few miles. They remind me that the region has a serious population decline problem, where there’s only the bare minimum number of people to even call it a community. That is, my home county (Lane County) has been losing population since its population peak in the 1960s; the decline, however, has greatly accelerated in my lifetime. Statistically speaking, in the last 20 years, more than a fifth of the local population has gone: fled, retired, moved on or died.

What’s left is an aging farm community, a few fledgling younger families and the small businesses supporting them — all of whom are hanging on for their lives. And when they can no longer take it — whether financially, physically or spiritually — they leave their homes behind, their land goes up for auction, farmers like my parents buy it and the buildings (and memories) left behind are incinerated.

The Old Magie Place was a two-story house with two or three bedrooms and a corner porch on its back side, which sagged next to the kitchen. White siding still covered most of the exterior, at least in the places where the cattle hadn’t rubbed up against it and caused it to fall in. Inside, there were signs of other animals, including shit pellets from rabbits and nests made by rats and mice. The glass was mostly gone from the windows, and the decades of dust blowing in unabated made dirt drifts in the corners of the house, like the earth was reclaiming the space. Birds found their way into the higher areas, and a layer of white bird crap covered pretty much everything.

When the house and the farmland surrounding it eventually sold to my family — 312 acres of dryland farm like that in the area costs generally about half a million dollars — the house became our problem. At a family meeting, it was decided that we’d burn the house down for good. We talked about its value as a structure, and whether there was any cultural importance or “redeeming social value” to the place — i.e., was there any kind of local attachment to it, or was it a good landmark? It usually, though, comes down to “liability,” like what are the odds that someone will trespass onto the property to poke around, and step on a nail or fall through the floor and sue us. Unfortunately, that likelihood is high, and thus, we employ the flames.

Fire is the best option because it takes care of the whole issue all at once. Another option would be to spend weeks dismantling the house, piece by piece. Or we could rent a bulldozer and push it down, then burn it, but bulldozer rentals aren’t cheap, not like diesel fuel, which was three bucks a gallon at the time.

There is a loose system for burning these places down. First, we strip and salvage whatever won’t burn and whatever we can save, like pieces of metal siding, windows and hardware, doors, door handles and hinges. My dad likes to use the barn wood to build furniture, and he displays the other artifacts in his shop, like little trophies. His collection includes odd kitchen utensils, knick knacks, buttons, marbles, antique phones and lounge chairs that owls have been nesting in for generations. That said, most of what’s there is trash and gets left in place — especially if it’s flammable.

The morning of the Old Magie Place blaze, I invited a sheriff’s deputy to come watch. (While the fire was on our private property, it’s both policy and a good idea to get the all-clear from local law enforcement, which notifies the local volunteer fire department.) He was a local guy — a year ahead of me in school. He was known as a kind of a joker as a kid, as well as a little bit of an outlaw — black hair, a big gap between his front teeth and signature dimples his family is known for. Before he was a cop, he worked at the Harley-Davidson shop 90 miles away, and partied harder than most. Now in cargo pants and a tactical shirt, he looked reformed, but still tattooed and scrappy, like he could start some trouble if he wanted.

He was excited about the fire; it was the first one he’d been invited to see up close. As he told me over the phone, “Dude, don’t start without me.” He pulled up with his lights flashing, and popped the siren for the occasion. He got out of his cruiser with a 44-ounce fountain drink from the gas station in town and exclaimed, “Let’s get this party started!”

A little after noon on that misty, cool April day, I soaked the floors of what used to be the living room of the old house with about 10 gallons of off-road diesel, struck a match and touched the flame to a pile of local newspapers my parents subscribed to: the Garden City Telegram, the Scott County Record and the Dighton Herald. (I used diesel because it burns slower than gasoline, giving me time to get outside before things grew too dangerous.) Orange flames quickly slid up the walls to the ceiling, like liquid fingers. Smoke seeped through the shingles and blew into the wind. I noticed that the fire smelled earthier than the others I’d been apart of, I think because some of the walls were actually made of dirt — the Old Magie Place had started out as a soddy. 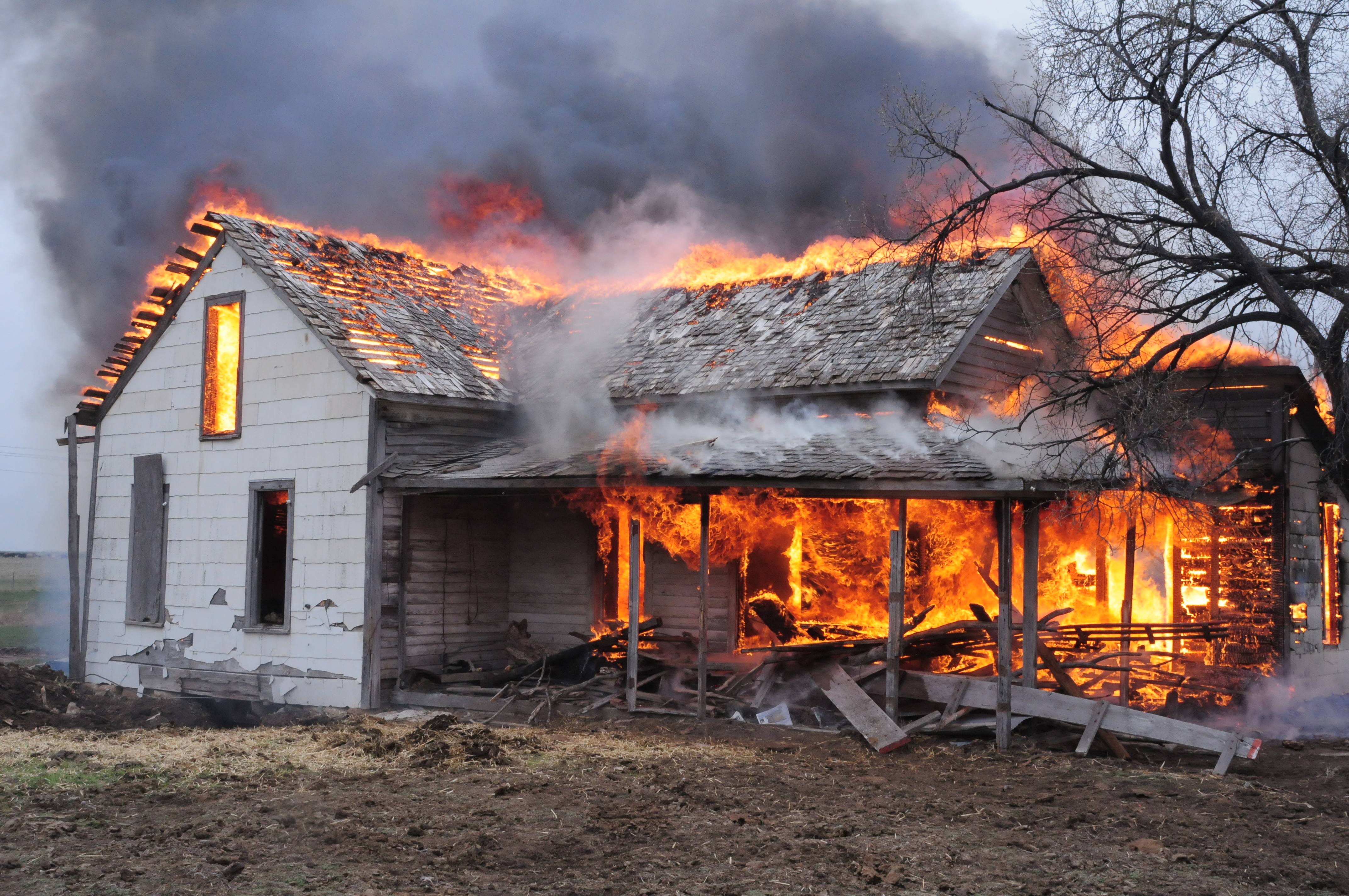 As I walked out into the damp spring air, I turned back to see fire spilling out of the windows, before eventually reaching the roof. The black-and-white smoke billowed into the next county. My parents cheered behind me as the fire raged on, erasing the centerpiece of someone’s legacy forever.

A nearby rancher showed up, too, driving a little pickup truck splattered with mud and cow shit. “You mind if I watch for a while?” he asked. My girlfriend at the time was also keeping an eye on the blaze; she brought granola bars and beef jerky to keep us energized as we worked. She had even helped me — along with a friend of the family who had worked on our farm and dated my little sister in high school — pile scrap wood and newspapers and slosh fuel all around the house.

As we watched the fire consume the house, I circled the structure constantly, making sure the flames weren’t spreading beyond its dimensions. I especially kept an eye on a budding elm tree by the house that turned black on its exposed face but never actually caught fire. At its peak, the fire was the most intense I’d ever seen. The closest I could get was about 50 feet from the flames, which still toasted my face. All told, the fire burned maybe 45 minutes until the last of the walls toppled, leaving only the chimney standing, until it fell in on itself, with nothing supporting the column of bricks.

In such moments, I’m always reminded that I’ve been burning things since I could strike a match. It started with trash, because in western Kansas at the time, we didn’t have a “trash service” where someone takes your garbage away for you. Our trash, in other words, was our problem. So whatever we could burn, we’d burn. Case in point: After Christmas, we’d drag the tree away from the house, soak it with fuel and let it rip. The wrapping paper and boxes would go in the burn barrel, too, which is just an old oil drum with the top cut off. I found that when I shot some bullet holes into it, the fire could breathe better, and the trash could burn a lot faster.

In the fall and winter — when it wasn’t hot and dry and therefore, a spark wasn’t liable to turn miles of wheat into a charred disaster — we’d get pitchforks and gather up the couple thousand basketball-size tumbleweeds that had blown into the trees all around our house. Me and my siblings would smash those dry weeds into a barrel of smoldering ash, and they’d glow golden orange and hurl white smoke upward. One summer when we got a lot of rain, the weeds grew too big for the burn barrel; and so, we waited for a day without wind, and made a pile of weeds the size of a cabin. The subsequent flames were furious and reached straight for the sky. It was the most satisfying blaze I was ever a part of, and cemented a family tradition: Burning shit for fun.

Or at least it was. Because about five miles from the Old Magie Place is another piece of land my parents bought — with another abandoned house on it. Inside, it looks like the family who lived there, the Zinks, just decided to walk out, empty handed, and start somewhere else. They left behind closets full of clothes, the refrigerator and cabinets stuffed with food and dishes. Painted portraits by the mother hang on the walls, and the father’s bowling trophies are displayed on the shelves in the basement. But it also has already become a liability: My dad found a collection of used syringes in the kitchen.

After we burn it to the ground as well, all the nails, ash and rubble will be pushed into a hole, covered with dirt and packed down. It will only, in fact, take a few summer rains for grass and weeds to overwhelm all that scorched earth, forever erasing yet another homestead on the American prairie.