I’ve done the legwork so that you never have to eat another crappy brownie again. Also, cakey can go to hell

Let’s talk brownies. Great dessert, and fun for the whole family, right? After all, everybody likes chocolate (I’m not responsible for the souls of the perverts out there who genuinely dislike chocolate). And yet, it seems like there are so many ways for brownies to be disappointing. We’ve all experienced those Starbucks brownies that have the density — and frankly, taste — of paperweights. We’ve all been promised “the world’s best brownies” by apple-cheeked bake sale staffers who fail to deliver.

It’s about the variables for me, and with brownies, there are many. Some bakers swear by a spoonful of espresso to spruce up their brownies; others include dark beer, sour cream, anything to brighten the brownie’s characteristic one-note sweetness. But as far as I’m concerned, a brownie can be sweet and one-note and still totally delicious, and you don’t even have to work that hard to make them!

The joy of brownies rests in their simplicity. These aren’t fussy, aerated Swiss rolls or pies with laminated crusts. You don’t need a stand mixer or any obscure ingredients (though, admittedly, baking chocolate gets expensive — more on that later). One baker, one bowl, one spoon, one pan and one hour (or two) of your time. No wonder brownies are the dessert that lend themselves most readily to the addition of weed. Even a lazy stoner like me can make great brownies, no problem!

That said, it’s still important to get those key variables right, and lucky for you, I’ve done the legwork so that you never have to eat another crappy brownie again.

Fudgy vs. Chewy vs. Cakey

To my mind, there’s only one way to make a brownie: chewy. Specifically, Faith Durand’s chewy brownie recipe for The Kitchn, which is simply a dream. But lest I get ahead of myself, some definitions of terms are in order. A fudgy brownie refers to one that’s more dense chocolate than crumbly bite; it’s likely to be gooey from how much chocolate and butter (i.e., fat) it contains. A chewy brownie — besides being the most appropriate and pious variety — is less wet and more rigidly structured than a fudgy brownie but still packs plenty of rich chocolate flavor. And a cakey brownie can go straight to hell. 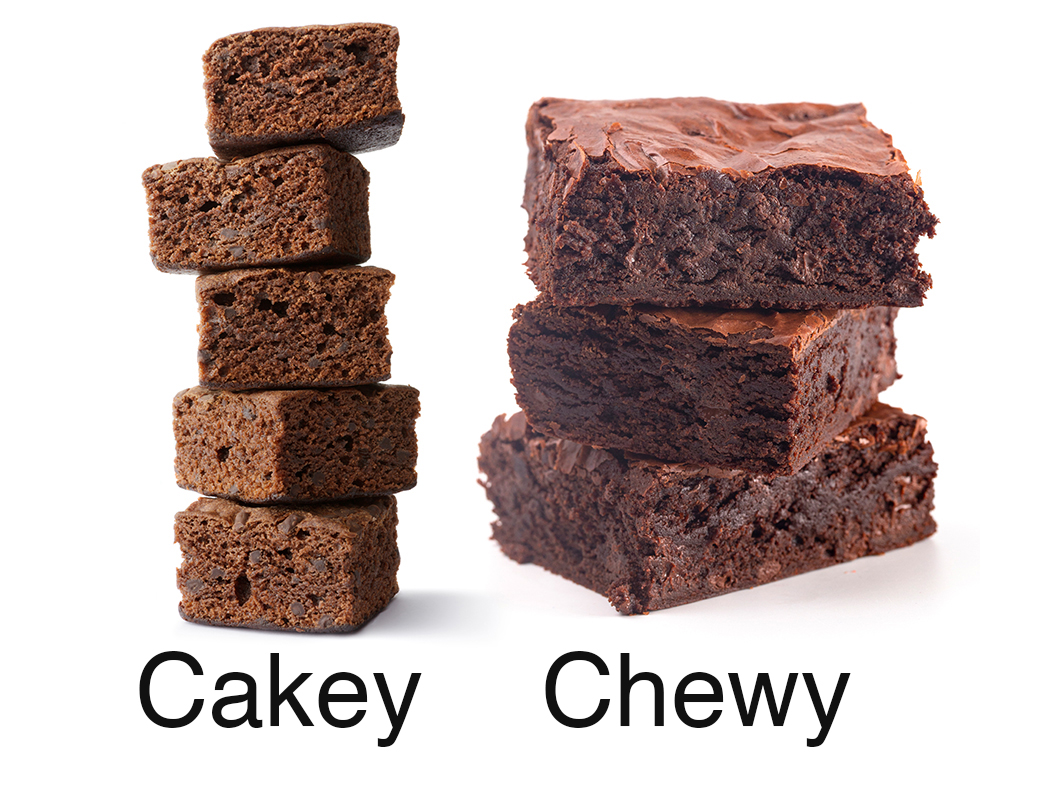 I’m sorry, but it’s 2020. The world is on fire and ravaged by plague; the time has come and gone for politeness, courtesy, pageantry. We’ve all lived our entire adult lives under the tyrannical rule of cake, which is, medically speaking, the most suck-ass of desserts. Somehow, though, cake clawed its bitch way to the top of the dessert food chain to be the thing you eat at every damn birthday party and wedding. Now it wants to pollute my brownies, too? With its dry crumblies that fill my mouth with dust?

Thanks, but no thanks. I’ll be over here eating chocolate treats that actually taste like chocolate rather than fiberglass.

Corner vs. Edge vs. Center

Anecdotally, the worst man I ever met in my life was a center brownie guy. The center brownie thing wasn’t what made him the worst man, but it didn’t help. We are neither toddlers nor grandpas, and as such, our desserts don’t need to mush meekly in our mouths like a hospital pot roast. We are tall, sexy adults in the prime of our lives with moderate-to-severe back pain, student loan debt and fully developed sets of chompers that can stand up to the crisp sear of a corner brownie’s edge. 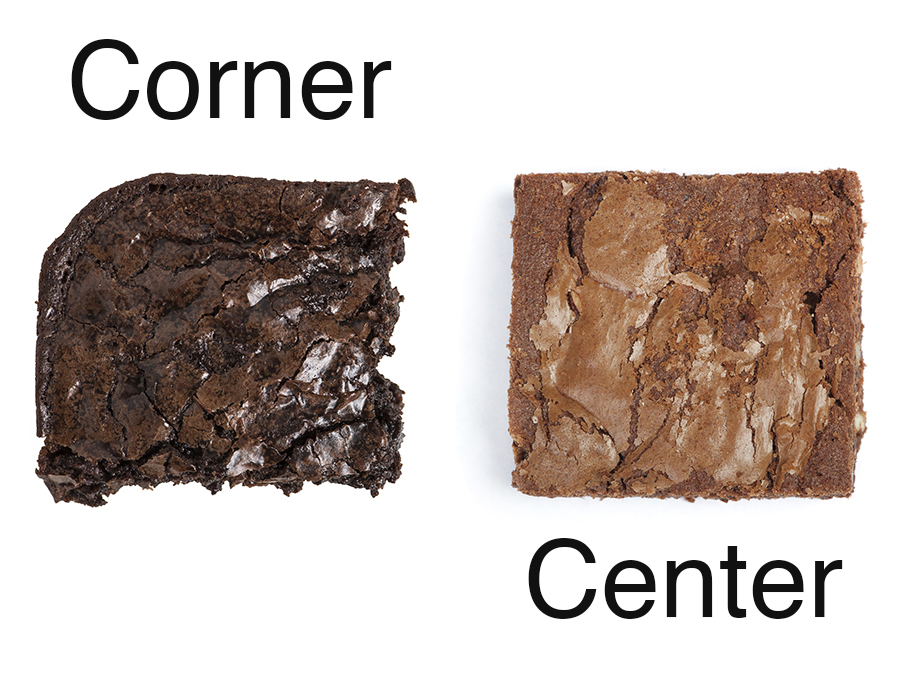 Another thing about the worst man: I would bake a pan of brownies, and he would take the first piece — but he insisted on making it a center piece every time. I’d be there chugging away with my chocolate and my butter, producing this labor of love in this shoebox of a kitchen that was always about 1,700 degrees hot no matter what time of year it was. My brownies would make my kitchen smell so fiendishly good and they’d come out with the top cracked just so, perfect in every way, and then this bull would come traipsing into my china shop to clumsily extract his precious fucking center brownie from an otherwise unbroken batch. It was fascinating and excruciating to watch, like when someone pukes on the subway.

So that’s why we as a society hate center brownies, but that isn’t really enough to recommend either corner or edge pieces. These two reasons should do the trick, though:

The crunch is self-explanatory: Brownies from the outer edges of the pan all have a raised, crisp edge from baking against the hot rim of the pan. Bite into a center piece and it succumbs instantly to your teeth like a simpering bitch; a corner or edge piece resists your bite, as if to tell you that it’s not afraid of you. I love a food that doesn’t go down without a fight!

The dip goes hand-in-hand with the crunch. That is, the raised edges of corner and edge pieces slope downwards into soft, gooey centers, whereas center pieces all have a uniform height and texture. So not only do these outer brownies have a little fight in them, but they also offer textural variety that their limp brothers in the center of the pan can’t.

More food ought to give us that much emotional range, in my opinion. What else offers it? The only thing I can think of off the top of my head is chicken Kiev, with that crisp breading giving way to a mouthful of melted butter — a thrilling exercise in contrast. But also, nobody eats chicken Kiev anymore, as it’s not 1970.

Nuts vs. No Nuts

I was anti-nut (ha, ha) for a long time. My belief was that brownies were already a perfect food, and there was no need to rock the boat by adding more stuff to them. Would you draw a little mustache on the Mona Lisa? Or enlarge the penis on the statue of David? Both of those things would be hilarious, actually, but the stakes are higher with brownies, which are a food that you eat rather than something dumb you fly to Europe to look at.

To my mind, it’s so much more important to get food right than it is to paint masterpieces or whatever; art is cool and whatnot, but food becomes a part of your body. I guess what I’m trying to say is, I used to find nuts gross, and I don’t really “get” art. 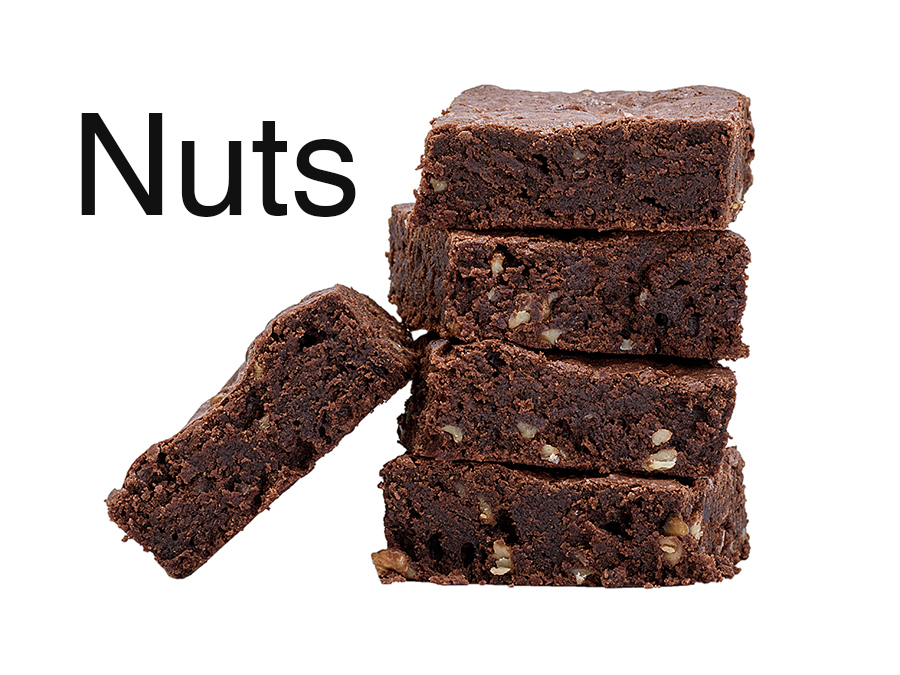 But then I started eating the brownies from my local falafel joint, of all places. Bushwick’s Zatar Grill has many fine qualities, not least of which is the fact that it describes its brownies like this:

But hear me out: First off, I’m not sure why they don’t mention the walnuts at all. Maybe the narrator indeed got the sweet tooth typing this and didn’t feel like saying any more, or maybe they stopped using walnuts sometime in the last few weeks since I last got one of their brownies. But in any event, each one of their brownies is approximately the size of a cinderblock, and it’s packed with bits of everything good — especially walnuts. Zatar singlehandedly converted me; $4.50 is a bargain for such a potent challenge to the core of my worldview. I get it now! Walnuts are to brownies what flaky sea salt is to chocolate chip cookies: They bring savor and texture, and in so doing perk up a dessert that can otherwise be a little stodgy.

I just got the sweet tooth typing this, too!

People shit on boxed mixes all the livelong day. Question: Why? Why do we feel that baking is most worth doing when it’s arduous and expensive? Bars of baking chocolate in particular cost a fortune, and the brownie recipe I favor uses two different kinds. That’s like $15 in raw ingredients alone, without even factoring in all the other ingredients and the time and work and washing of dishes, and oh, right, if you decide to add walnuts you’re looking at like $5 extra. And all this is for… what purpose, exactly? So we can feel like we really baked something?

Because as I understand it, that’s the upshot of most arguments against boxed mixes: They don’t constitute “real” “baking.” And for only 20-some-odd dollars and two hours extra, you could really bake!

There are crappy boxed mixes out there, to be sure. And I almost always home-bake my brownies because I find it soothing to bake. But at the end of the day, do I genuinely believe that my finished product is that much better than the double-chocolate brownie mix that Ghirardelli sells in my supermarket for $4 a box? Do I really think I know more about chocolate than fucking Ghirardelli?

It’s a hard question to answer, and one that every baker must answer to their own soul’s satisfaction. My point isn’t that boxed brownies are better than homemade ones — I don’t think they are. My point is that boxed brownies aren’t really worse, either. Look, they’re cheap and easy, and most boxed brownies don’t have that stale-air taste that plagues cookie mixes in particular. It’s not everybody’s idea of a good time, passing an afternoon in a hot kitchen over a mixing bowl. A lazy baker could do a lot worse.

Now, I’ve been pretty dogmatic here, but in reality, brownies are chocolate and flour and sugar and butter. You can’t go that far wrong. I’ve revived many a bad brownie with a quick trip to the microwave and a dollop of ice cream on top, and presto: I’ve just tricked myself into sincerely believing that I’m eating a brownie fresh out of the oven, because I’m not that bright. Any brownie is better than no brownie at all! Ultimately, all we have to really remember is that people who prefer cakey brownies are untrustworthy in love and life.

Beyond that, the world is ours.