Between the sweat and the shit-talking, the towel-snapping and the toilets, you’re lucky to escape alive

Several lifetimes ago, in a presidential debate, then-candidate Trump defended some pretty gross comments he’d made about women as “locker room talk.” The use of this cavalier phrase — in turn meant to convey an atmosphere of loose, unserious, immature banter — caused Americans to review their own experience with locker rooms. Quite a few men said they’d never heard locker room talk of the sort Trump utters on the 2005 Access Hollywood tape, which makes sense, because even the most self-aggrandizing creep is likely to stop short of the phrase “grab ’em by the pussy.”

In fact, the incoherence of Trump’s explicit ramblings (shades of Steve Carell feigning sexual knowledge at the beginning of The 40-Year-Old Virgin) may be what allowed millions of voters to look past them. Here’s a bullshitter who got caught bullshitting, people concluded. By (sort of) copping to his bullshit in this case, Trump also set a low bar that he’d never clear again; a year later, he was floating the laughable idea that the recording, which he’d already confirmed as authentic, was fake. Obviously, the non-denialist approach was smarter, because people are happy to view a male locker room — whether literal or figurative — as a place beyond not only rules but meaning.

This impression has lately resurfaced within a spate of memes purporting to compare the anarchy of boys’ locker rooms with the civility of girls locker rooms. Originating in Russian social media, they evoke male nostalgia for the warlike changing periods before and after gym class, when minimal supervision, homosocial friction, excess energy and pubescent anxiety created a singular dude-stravaganza. Between the sweat and the shit-talking, the towel-snapping and the toilets, you’re lucky to escape alive. 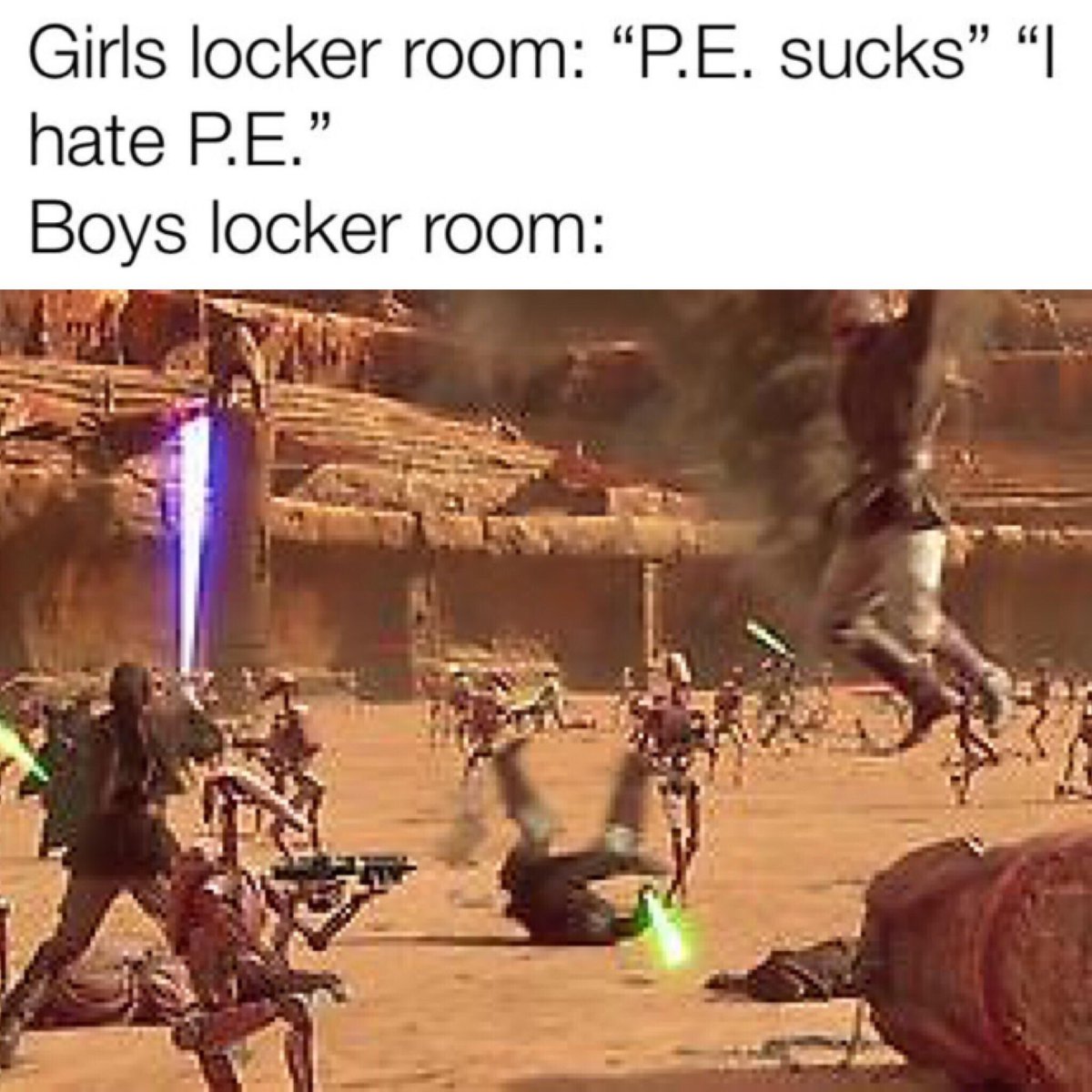 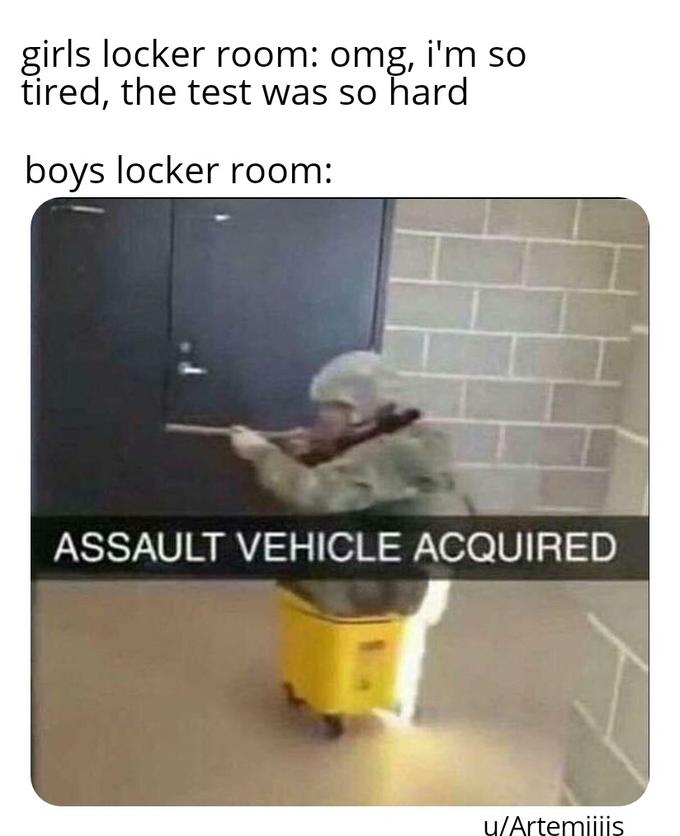 On Reddit’s r/dankmemes, where these posts are currently shifting into the end-phase of their fleeting popularity, users are sharing stories of their own young life in the locker room — stories that turn out to be fairly universal. “Dude, after the PE my friend was always sweaty like a waterfall,” wrote one guy. “He would take [off] that T-shirt and throw [it at our] faces randomly in the locker. Good times, it even made a floppy sound when it connected with a face.” Another dude recalled, “We used to shut the lights off and throw basketballs off the walls in complete darkness.” A third had tales of deodorant flamethrowers, stuffing smaller kids into lockers, watching porn on phones and comparing dicks in the shower. All in all, it seems, if you didn’t want to fuck with someone, you spent these frantic minutes hoping not to become an arbitrary target.

But when the Axe Body Spray came out, there was nowhere left to hide. 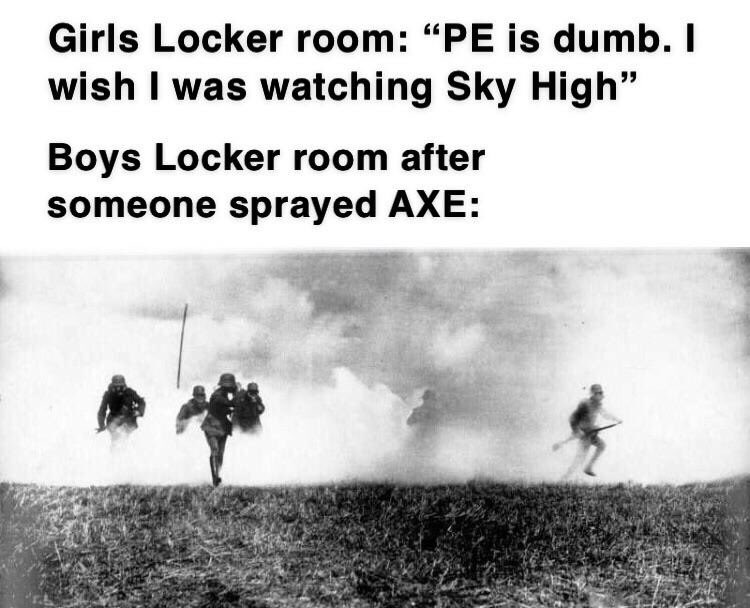 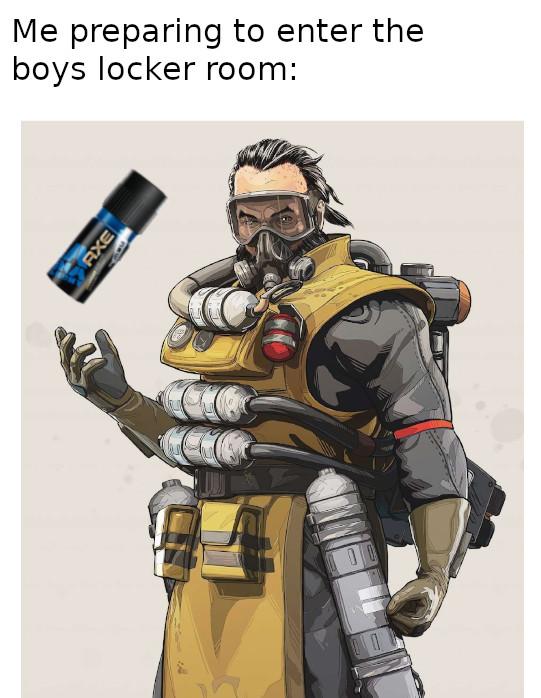 As primal as the energy in the boys’ locker room was, it didn’t necessarily result in violence. It could just as easily spur the creation of weird communal games, rituals and stuff that genuinely bordered on performance art. The fact that everyone was exposed and vulnerable together — that most were somewhat mortified by their body and had adopted various coping mechanisms to survive this gauntlet of group nudity — made the locker room a site of manic creativity. Young men performed the hell out of whatever masculinity they felt most comfortable in, and the outcome was often a scene that would have made no sense in any other context. Not that it ever did in this case, either. 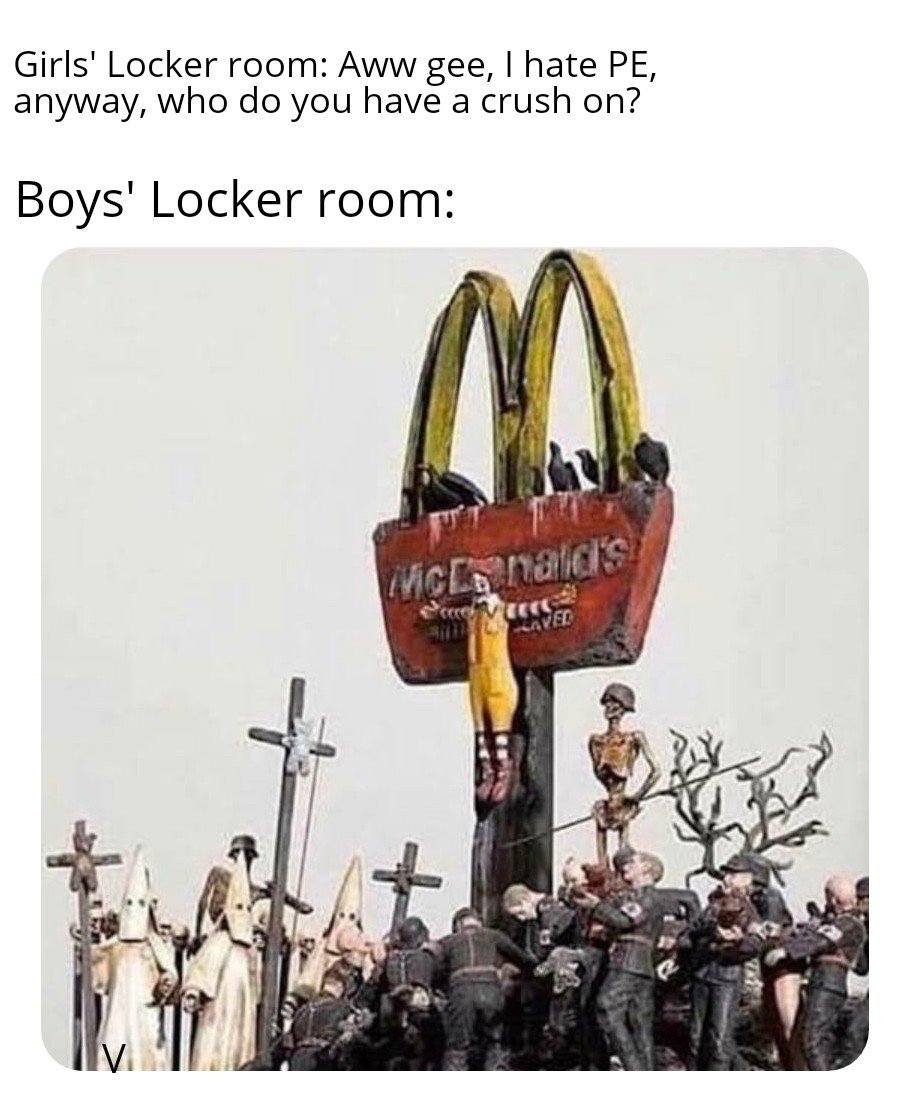 Really, what we enacted in there — and this gets us back to Trump’s comments — had less to do with true identity than how we imagined we ought to behave when separated from the girls. Here, the thought was, you could be as wild and disgusting as you liked without the opposite sex present to judge you. That led to the (unfounded) assumption that girls’ locker rooms, bathrooms, etc. are comparatively clean and peaceful, a sanctuary from male chaos.

I would have ventured, as a shy YMCA day-camper who always made sure to slip into his bathing suit with a privacy towel around his waist, that the girls at least didn’t have to contend with old men strutting around naked so everyone had to see their drooping nuts. Some locker room memes challenge the conventional wisdom that the girls’ side was any safer than the boys’, but they are in the minority. 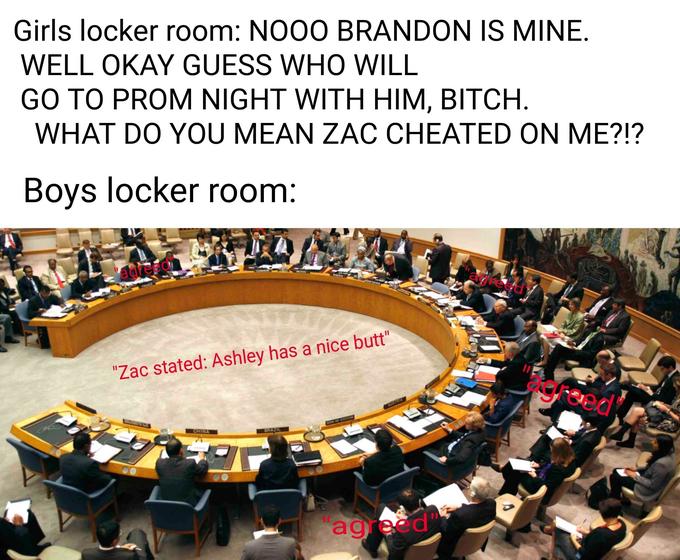 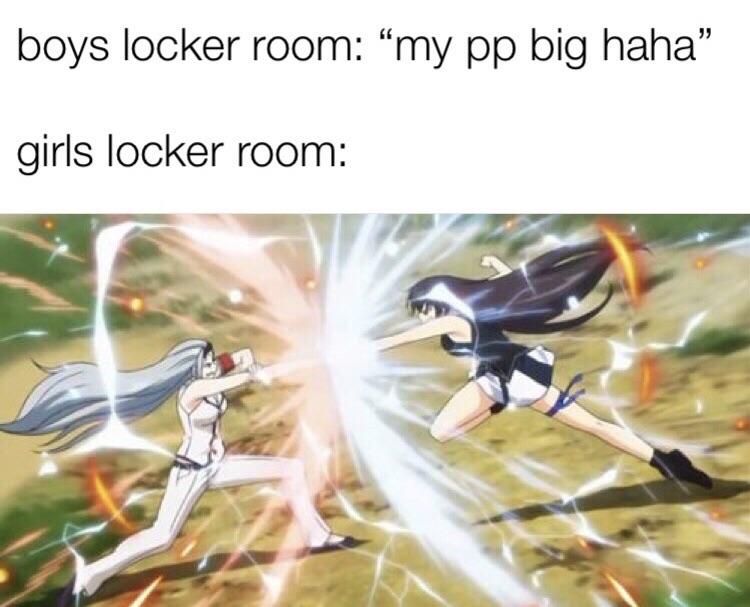 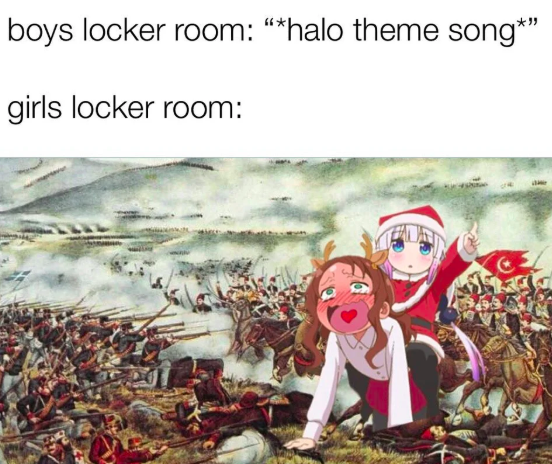 What is the legacy of the boys’ locker room narrative? I think, as the discourse around Trump’s fake-macho bluster showed, men have a tendency to exaggerate the nature of the locker room as surely as they would a story told within one. I don’t remember much in the way of slapstick aggression or goofy stunts from my time in the high school gym lockers — in fact, my strongest memory of this space is learning about moisturizing when one kid asked another for some lotion because his hands were “ashy.” Nobody who overhead even made a joke about masturbating! Truly, we were enlightened. 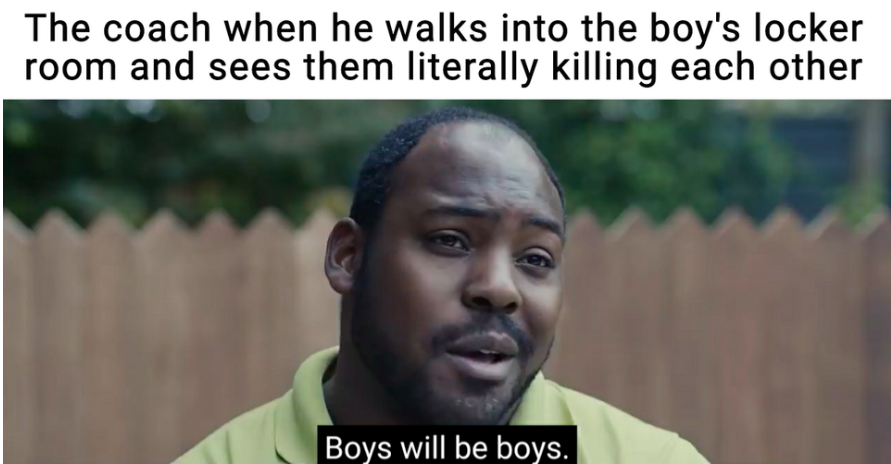 So while these memes are amusing, I see them as largely reflective of what we think “boyishness” connotes, not what actual boys say and do. Are teenagers likely to get up to some high jinks, given the opportunity? No doubt. But they’re just as apt to build small, silly moments into outsize legends. That war is the chosen metaphor of this premise is almost too clever by half, since veterans’ war stories are typically understood to inhabit a subjective truth, not a wholly external one. Whether you fought in a bloody conflict or merely endured years of physical education, you start here: I was in the shit, man. If you dodged the draft, of course, you run the risk of leaning too hard on the other thing.