Getting to the Bottom of Bottom Culture

When you live in L.A., it’s worth studying astrology — because there’s a 50/50 chance that’s what you and your next Lyft driver will be talking about. (Wouldn’t hurt to brush up on crystals, also.) But a main appeal of the Zodiac, for me, is using it as a kind of funhouse mirror. Am I, a Pisces, truly empathetic and escapist? Am I sometimes over-sensitive? More recently, I looked up what Pisces are supposedly like in bed. I learned that I probably have a foot fetish, and that I’m attracted to dominant partners.

Which led me to wonder, in my ignorant, heterosexual fashion: Am I a bottom?

In the most clinical definition, to bottom — yes, it’s also a verb — means taking the receptive role in penetrative sex. For male partners, that covers oral and anal intercourse, though the very word “bottom” has an obvious investment in the ass part of that semantic balance. For lesbians, bottoming is a tad more open-ended, so to speak; it may include penetration by strap-on or similar toy, or simply submitting to the other person’s direction and control. For trans individuals, the preference to bottom or top has lots to do with the expression of gender identity. Straight men who enjoy getting pegged by women could be considered bottoms, and if you don’t think the label doesn’t fit heterosexual women, you’re ignoring all the two demographics have in common.

Already, then, you can see that the top/bottom distinction is way more fluid and complex than whose dick is in whose butt — and that’s without introducing the “vers,” or “versatile” folks, those ready and willing to assume either role. Indeed, sex experts have pushed back on our inclination to adopt fixed identities via sexual positions, but that hasn’t stopped online communities from joking about what constitutes “bottom culture,” hitting upon any number of contradictions in the process. Take these diverging reactions to the red carpet looks of actor Timothée Chalamet, for example. The first guy observes that Chalamet, in donning the kind of harness that a bottom in a BDSM relationship would conceivably wear, is “appropriating” that aesthetic. The second professes a desire to be the totally passive bottom for Chalamet — who, incidentally, is straight.

Bottoming memes appear to start, at least, from the premise of getting fucked in the ass, though they quickly expand from the mechanics of this to the submissive demeanor implied, and from the “job” of bottoming to the personality equipped for it. You can draw a line from listicles like “15 Things Only Bottoms Understand” — which addresses the bottom’s high threshold for pain, attention to cleanliness and hair removal, and interest in eating healthy — to this edited clip of Amy Adams and Nicole Kidman talking in circles about the extensive “prep” that acting requires and how they’ll “go into discomfort” for a role. In a shifted context, they sound like bottoms discussing strategy.

Once you achieve the abstraction of innuendo, the “bottom” title is open to competing, idiosyncratic takes — not unlike an astrological sign — and only a few of these will refer directly to butt stuff. It depends on your experience of bottoms, and of bottoming.

Some have claimed that bottoms actually sit a certain way:

Keyboard-mashing has some connection to bottom culture, though a tricky one: 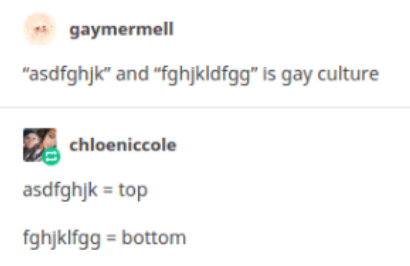 Bottom culture may encompass speech patterns, low phone battery and certain beverages. At a certain point, you can classify almost anything you want as bottom-y.

Declaring the nonsexual qualities of a bottom has the unexpected but welcome effect of eroding “bottom” as an inflexible category. No longer must it be taken in the literal sense; it conveys a social presence as well as (or apart from) what the bottom does in bed. Which isn’t to say we’re lacking in graphic material on that front, either: 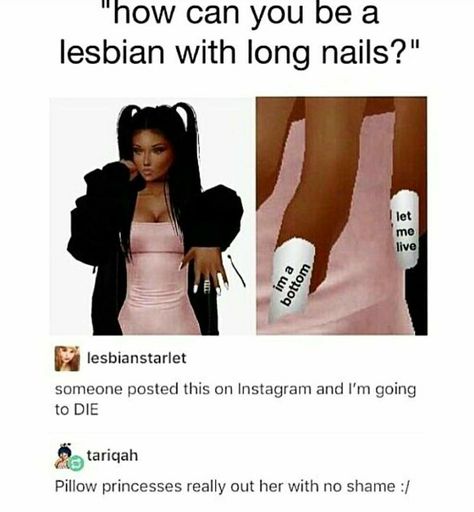 Nevertheless, a majority of the memes wrestle with preconceptions of the bottoming type or push them in a different direction. Some tops say that bottoms are lazy — but the more dominant power bottoms and bossy bottoms are sure to disagree. Are bottoms “always hungry,” or do they “love to cook”? Is it true they struggle with parallel parking? And why don’t they get credit for their bravery? The saddest trope of the bottom is that they are endlessly accommodating yet always disrespected, weak of spirit though somehow indestructible, and this becomes a cornerstone of the bottom’s self-deprecating humor. To say “I’m just a hole, sir” requires an ironic self-respect.

And throughout these debates, if that word applies, you find that bottoming really does mean different things to different people, even if it does frequently come back to the intricacies of anal sex. You could read this eclectic content as a reaction to the straight dorks overeager to taxonomize gay behavior or ascribe a hierarchical process to LGBTQ relationships where none exists. In reality, queer people are putting themselves out there, seeing what works, taking life as it comes, same as anyone. No two bottoms are exactly alike, and the profusion of absurd, tongue-in-cheek stereotypes about them is a winning counterpunch to the harmful ones, making room for self-definition.

But that’s enough heterosplaining from me. I have to go home and be a submissive for my girlfriend. See, she’s a Leo, and they like to be in charge.

… I’ll refer you to the chart: