Like so many memes before it, that chubby Bugs Bunny fell victim to alt-right shitposters

This week, Reddit banned 2,000 communities for violating its newly updated content policies, as part of a renewed effort to curb hate speech on the site. The most notable casualties were subreddits r/The_Donald, a hub for the president’s fervent supporters, and r/ChapoTrapHouse, for listeners of a political podcast by the same name — both were hosting hate speech, Reddit leadership said, and moderators hadn’t done enough to rein in toxic or abusive material.

Many other deleted subreddits were small and/or inactive, and their vanishing attracted little notice. But the list of bans included at least one surprise: the meme forum r/BigChungus.

Big Chungus, if you’re not already internet-poisoned enough to know, is a term that refers to a particular frame of Bugs Bunny from the 1941 cartoon Wabbit Twouble. In the segment, Bugs torments a significantly chubbier version of Elmer Fudd and at one point inflates himself to mock his human nemesis. The out-of-context image began to circulate on 4chan a few years ago, sometimes for humorous juxtaposition, though in a 2017 post, a user simply captioned plump Bugs Bunny with the question, “How do we stop him?”

It wasn’t until 2018, however, that anyone hit upon the addition of “chungus” (an evocative catchall word said to have been coined by video game reviewer and podcaster Jim Sterling). To amuse a friend bored in class, redditor GaryTheTaco created the cover for a fake PlayStation 4 game called Big Chungus, featuring the fat Bugs Bunny. Months later, he shared his work with the shitposting group r/comedyheaven; a few days later, on Facebook, a GameStop employee related the story of a mom who had come into the store requesting this nonexistent title for her son, who had pranked her with the meme.

So far, so innocuous. At this point, r/BigChungus already existed, for reasons not entirely clear; whatever its original purpose, the subreddit became a home for all things chungus-related. The popularity of the meme ebbed and flowed a bit, with a definite resurgence mid-2019. In almost every permutation, Big Chungus was more or less celebrated for being big, and being a chungus; the joke tended to resist any meaning besides the hilariously reductive one. Big Chungus didn’t need a reason to exist. He just did. You could either enjoy it or move along. 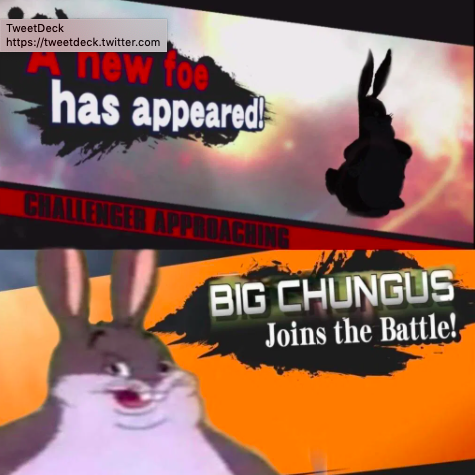 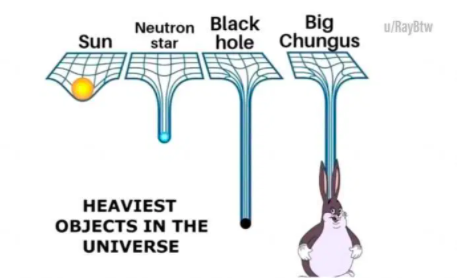 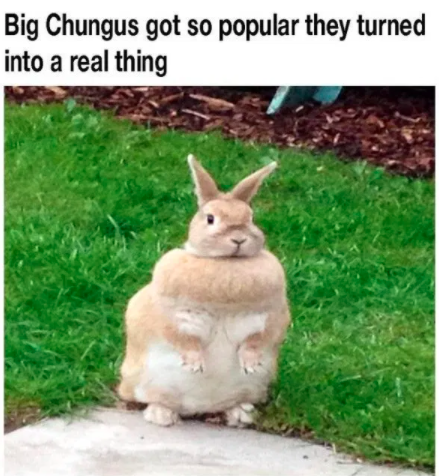 In time, Big Chungus was identified as a paragon of “wholesome” content, along with Keanu Reeves, “Doggos,” Baby Yoda and other beloved figures. That, in the end, may have been his downfall: He was too pure to remain unsullied.

As early as February 2019, you could watch a mashup video called “Hitler Interviews Big Chungus,” and a Nazi connection was probably reinforced by the observation that since Wabbit Twouble was released in 1941, it’s possible that Hitler saw the original Big Chungus for himself.

Other subreddits, eventually banned, tried to appropriate Big Chungus for nefarious purposes: r/ChungusEthnostate was deleted early in 2020 for deploying the meme “in offensive ways, particularly against people of color, trans people and Jewish people,” announced a user on r/AgainstHateSubreddits. The same watchdogs accused someone on r/ChungusLovers of a “veiled death threat” against Rep. Ilhan Omar and the forum of propagating “ethnoterrorist slogans.” As these pages were taken down, it seems the racists took their Big Chungus–branded hate speech over to the main subreddit.

Ah, well. Perhaps it’s better for this chonky boi to have his freedom, rather than suffer more degradation at the hands of alt-right edgelords. We can remember Big Chungus as he was, and preserve that noble spirit. The worst of us want to poison the best we have, but you can’t let them. Big Chungus is dead; long live Big Chungus. See you on that farther shore, old friend.