With the retirement of 84-year-old Caroll Spinney, the puppeteer who’s brought Sesame Street’s Oscar the Grouch and Big Bird to life since the show premiered in 1969, generations of viewers are sharing how the iconic characters touched their lives. Big Bird, in particular, has been an essential protagonist and audience surrogate for the series, played by Spinney with a 6-year-old’s curiosity, friendliness and sense of awe.

But as with so many stars of a culture that predates the web, Big Bird’s internet legacy is a bit more complicated. Weirdos with Wi-Fi are always going to put their own spin on anyone — or any Muppet — of significance. In Big Bird’s case, that usually involves performing a thought experiment: What if you personally encountered a real 8-foot-2 bird?

History appears to back up this ornithophobic reaction: Where early humans encountered gigantic avian species, they tended to wipe the animals out.

While we feel a natural affinity with mammals larger than ourselves, the mere thought of something beaked, feathered and almost reptilian in its mannerisms looming over us is both chilling and traumatic. To a child’s eye, Big Bird is what he’s meant to be: a sweet, non-threatening creature learning the alphabet, just like you. Only with the anxieties and distrust cultivated in adulthood do we come to fear Spinney’s oversized canary as something unnatural and, on a gut level, simply wrong. Big Bird becomes a monster.

This could be why, in the past few years, a curious genre of dark Big Bird memes has flourished. Again, it’s not unusual to see kids’ entertainment repurposed for grown-up jokes — Kermit the Frog makes frequent appearances on the timeline as a “relatable” entity — but nobody seems to identify with Big Bird. On the contrary, people have made him out to be innately creepy, if not a downright murderous sociopath. Observe: 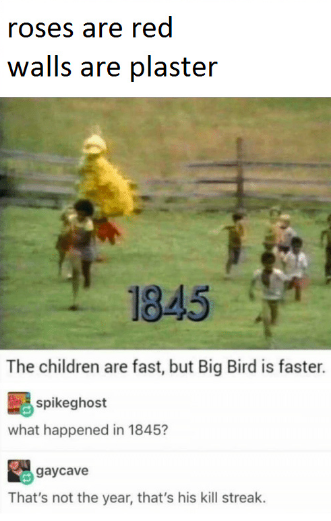 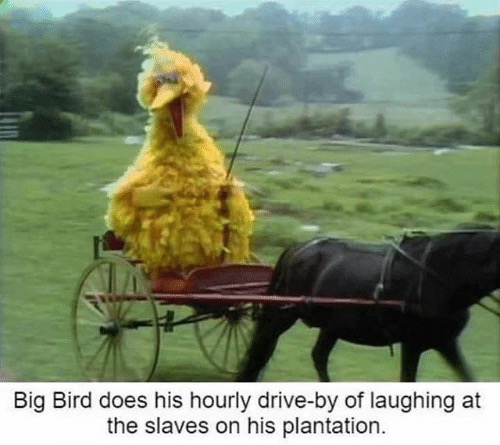 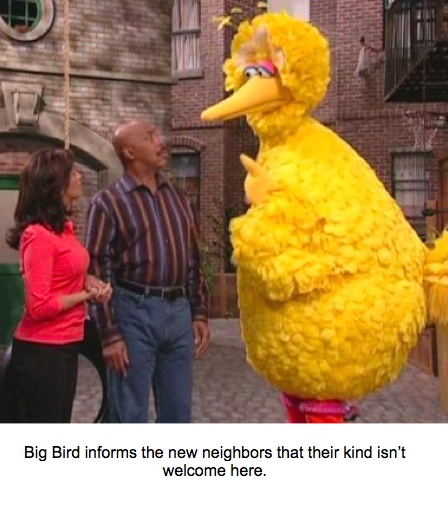 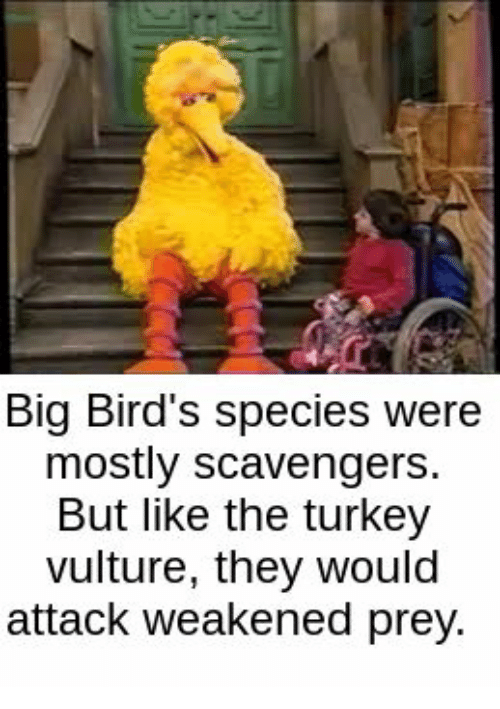 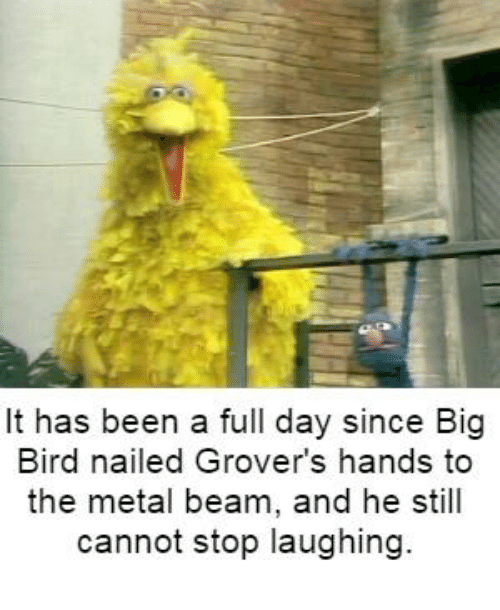 If you think that’s bad, don’t search for more. Otherwise you’ll learn Big Bird is also blowing up kids with IEDs and popping pills, or that he helped to construct the Berlin Wall. The most disturbing stuff includes rape content and racist junk — Big Bird owning slaves is, for some reason, a popular trope — in which the poor fellow appears to serve as cover for genuinely endorsed white supremacist ideas.

In a more tasteful mode, meanwhile, the satire site Clickhole has mined Big Bird’s horrific potential with headlines including “Did ‘Sesame Street’ Go Too Far Yesterday When Big Bird Dunked a Child in a Bucket of Soapy Water and Used Him Like a Sponge to Wash His Boat?” and “A New Era: The Jim Henson Company Is Making Big Bird’s Fingers 15 Times Longer So That He Can Point at Children From Farther Away” and, of course, the scariest of all:

One might argue that this is a basic reversal of emotional polarity: Big Bird, we always believed, was an avatar of kindness and understanding, so it’s amusing to recast him as a ghastly villain capable of the worst.

Yet the gag has strayed into such extremes that it ceases to be about a preposterous yellow beast and morphs into a commentary on our own corrupted innocence. Big Bird has done nothing wrong in his life. It is we, who, in getting older and more perverse, begin to speculate that his naiveté is merely a front, his motivations are evil, and his body a foul accident, perhaps a crime against god. 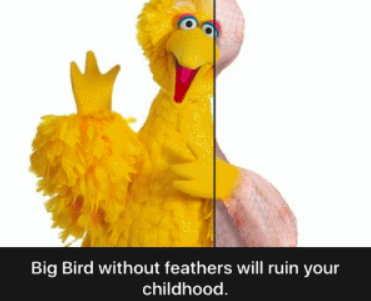 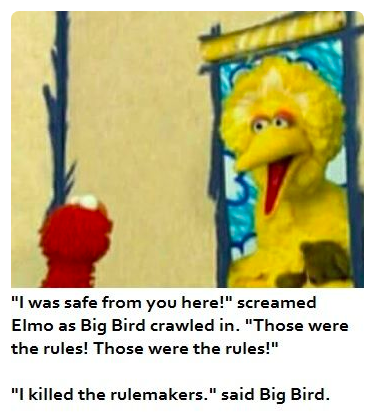 What’s truly strange is that the actual Big Bird has managed to avoid much association with all that is wicked and tragic in this world. NASA at one point had the idea to launch him into Earth orbit with astronauts to get children interested in space exploration, but, among other problems, the costume was too big — and so Spinney was not aboard the shuttle Challenger on January 28, 1986, when it exploded after takeoff, killing the entire crew.

Big Bird was thrust into the political spotlight in 2012 when Mitt Romney mentioned wanting to cut PBS funding despite being fond of the character; rather than let himself be dragged into a partisan debate, Big Bird declined to share his position, saying he didn’t want to “ruffle any feathers.” It’s as if he’s immune to strife and pain.

Which, I’m sure, makes the meme crowd try even harder to drag him through the mud. But the majority of their efforts will never break through into the mainstream because they’re just not believable. Big Bird is pure. Big Bird is a pal. He has no secrets or skeletons in the closet. And he endures in grace even as we insult him. What a legend.