Biden Is Becoming the Deadbeat-in-Chief

The president’s really living it up for a guy who owes us $2,000

Joe Biden has been president for a month. If there’s a grace period for delivering on your simplest and most actionable campaign promise, his is up. Yet, almost a full year into the pandemic, Americans are still waiting on their next round of COVID-19 stimulus checks.

Amid a slew of enraging if predictable disappointments at the start of Biden’s term — he said a minimum wage hike was unlikely, abandoned a pledge to halt deportations and rejected the very concept of $50,000 in student loan forgiveness for borrowers drowning in debt — the failure to pay Americans another $2,000 (excuse me, $1,400) is emerging as his most obvious blunder. The guarantee of this relief not only helped Biden beat Trump, it’s a major reason why the Democrats won Georgia’s Senate seats in January, giving the party control of both houses of Congress. Which, in theory, should make passing your legislation that much easier. Right?

Instead, to judge by social media, Biden’s delinquency has already earned him the reputation of a deadbeat. Every day, we log on to ask: “Where the fuck is my money, Joe?” Anyone who’s seen a mob movie knows it’s not ideal to be ducking the guy you owe a couple grand after a run of gambling losses; Joe has the unenviable position of owing as much to millions of people, and he still has the audacity to show his face on the street like it’s no great concern. Worse, he’s wearing nice leather jackets, lighting up the White House with candles, killing time by playing Mario Kart and tweeting cool photos of himself. It’s almost as if he’s… forgotten something?

It would be a grave mistake to dismiss this as just another adaptable meme. Behind it is real, ongoing economic peril and the growing sense that Biden can’t meet the lowest of our expectations. Trimming the amount from $2,000 to $1,400 on the asinine pretext that a previous $600 payment authorized by Trump was the first installment is betrayal enough; dragging your feet on the reduced sum makes the ruling party look weak, disorganized and detached from the nation’s suffering. Republicans may be against “handouts,” but that won’t stop them from saying Biden stiffed the American people, should the delay continue. A majority of us don’t have the option of getting our landlords “most of” the rent weeks after it was due. Our sympathy has run dry. 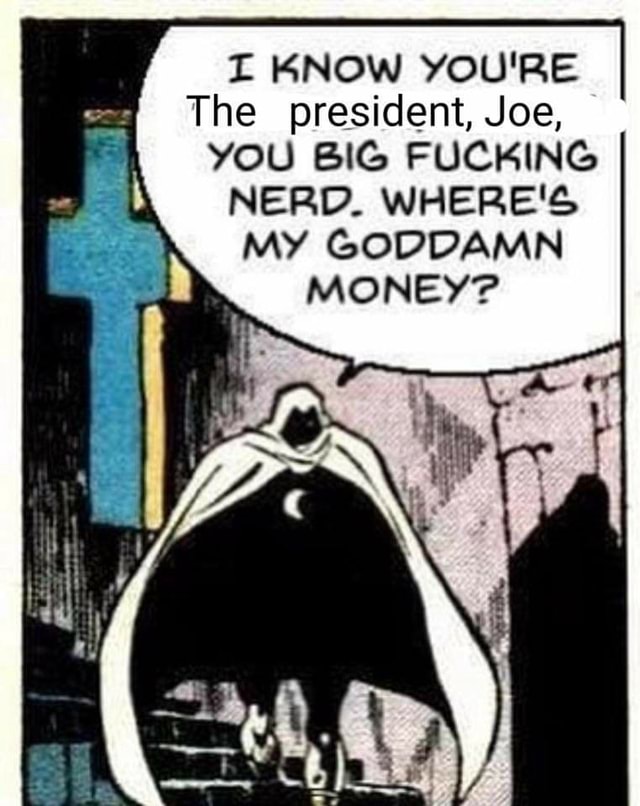 So far, President Biden and Vice President Kamala Harris have done a bang-up job of managing aesthetics. They dress well, in professional clothes that actually fit. Their events, unlike Trump’s, have pleasing optics, being coordinated by folks who know what they’re doing and don’t cut corners. There are heart decorations and nice dogs. The social media accounts, especially after an era of chaotic, dangerous, caps-locked shitposts, have a remarkably smooth polish and even-keeled tone. All of it is styled and curated to project a return to competence.

What’s missing is the substance — and the empty wallet is a damning, undeniable symbol of that omission. What good is having leadership that looks and sounds like they’ve got the situation under control when they won’t hit the big red button that makes it rain? Nothing can create more confidence and forward momentum than this direct assistance. The alternative is an entrenched bitterness and, ultimately, an electoral bloodbath. It may seem that Biden has been in office a very short while, but political cycles aren’t that long. It’s past time to pay the piper, and they still don’t have the paperwork sorted out because a couple of assholes think fast food workers shouldn’t make $15 an hour. Not exactly inspiring stuff. And hard to forget, too.

Yes, if this administration wants a legacy other than “lousy cheapskates,” they’d better fire up those money printers and start stuffing envelopes. One way or another, this beleaguered country will collect. For now, the threat is more or less a joke — a constant little nagging reminder. How soon before it’s a bat to the kneecaps? Hey, Joey boy, you wouldn’t be avoiding us voters, would you? Nice presidency you got there. Would be a shame if it burned to the ground.