We May Have Memed President Biden Into Existence

For progressive leftists, Joe Biden’s 2020 primary run has been a rude wake-up call. Despite his alarming naïveté about what’s even plausible in today’s political landscape — he actually just said that with Trump out of office, Republicans would have an “epiphany” and embrace bipartisanship — the former vice president has the numbers to win. In fact, “I can win” is just about the only argument he’s offered for entering the race (never mind that he can’t even get his campaign website to rank above a parody version in Google search results). The liberal establishment’s acceptance of this old familiar face, which comes along with a web of corporate lobbyists and a penchant for unsolicited back rubs that people seem to think is normal, was all but preordained. He is the front-runner.

If this feels like a shock to the anti-centrist wing of the Democratic party, that’s because we let ourselves imagine that a late fundraising start and steady torrent of the usual Biden gaffes would drive him off a cliff — to say nothing of his appalling record in Washington. Over the decades, he’s voted to gut welfare and start the war in Iraq, opposed desegregation of schools, advocated for mass incarceration, helped to craft the Patriot Act, resisted net neutrality, cozied up to Wall Street banks and threw Anita Hill to the wolves when she gave congressional testimony accusing Supreme Court nominee Clarence Thomas of sexual harassment.

The problem is, every piece I linked in the previous sentence is a relatively recent attempt to unravel the opinion of Biden already held by many Americans: that he’s an affable, decidedly liberal everyman.

Where did that image come from, and why is it so ingrained?

Start with the 2008 primaries, in which Biden was rightly seen as a go-nowhere guy prone to fumbling the most basic soundbite, as when he described candidate Barack Obama as “the first mainstream African-American who is articulate and bright and clean and a nice-looking guy.” He dropped out the night of the Iowa caucuses, but months later, he became Obama’s running mate — and that shine never quite came off. All he had to do was debate Gov. Sarah Palin (which ought to make anyone look good) and lend his air of experience/whiteness to a historic ticket. Obama was then rather popular in office, and Biden’s stock more or less rose to his level, with Democrats hardly more likely to criticize him than they would the first black president. His continued tendency to improvise or go off-message, meanwhile, cast him as the goofy wildcard to Obama’s calm and aloof operator. And that’s what led to the phenomenon of the Onion’s Biden.

The satirical newspaper and website, as the New York Times reported in 2010, veered away from a direct parody of the vice president and into a portrait “entirely incongruous with his public image.” Biden’s looseness as a politician was alchemically translated for an immensely popular string of articles that had him chug beer, drive a Trans Am and generally behave like a divorced dirtbag uncle squatting in the White House. Biden himself got a kick out of it, and he did his part to live up to the joke in a somewhat more wholesome manner: rocking aviator shades, double-fisting ice cream cones, etc.

By 2016, if he showed up for, say, The Tonight Show, the sunglasses-and-ice-cream bit was de rigueur. The combined effect of the public branding and the comedic slant was that of a lovable rogue. We didn’t think much about what Biden did in office, as he wasn’t in charge, and the persona satisfied. At the beginning of his presidency, Obama described Biden as a basketball player “who does a bunch of things that don’t show up in the stat sheet,” which sounded like a diplomatic way of saying he didn’t have a significant workload — an impression only bolstered when Joe did a promotion with Julia Louis-Dreyfus for HBO’s Veep, a sitcom that starts from the premise that the vice president is a powerless figurehead. He was just a nerdy-cool dad along for the ride.

Earlier this month, former Onion writer Joe Garden voiced his regret at possibly aiding this evolution or softening of Biden’s repute. By any account, Biden is talented in the retail side of his profession and incredibly charming in person. But, as Garden sees it, the long-running gag about the former VP effaced nearly everything else — including, notably, the areas where his ideology may have diverged from Obama’s. Hard to see the former president doing something like this, for example:

Now Biden can mount a 2020 bid on charisma alone — or the assumption of it, anyway, since it’s hard to tell where public affection for him ends and Leslie Knope’s crush on him in Parks and Recreation begins. That series, too, posed Biden as a vessel for odd, misplaced and virtually apolitical enthusiasm: Knope mainly raved about his sex appeal, and viewers were free to interpret this as an endorsement of his career. Take this Bustle piece, which declared that Leslie Knope “is a proud feminist and amazing role model with some pretty high standards. If Biden is good enough for her, you better believe he’s qualified to co-run the country.”

But how much faith should we really have in the competence of a man whose first presidential campaign was derailed by “numerous self-aggrandizing thefts, misstatements and exaggerations,” including a plagiarized speech? Back in 1987, he also had an especially Trumpian moment when he berated a heckler in one of his audiences, saying, “I think I probably have a much higher IQ than you do, I suspect,” and followed this up with a couple of outright lies as to his educational achievements.

All of 32 years later, and he’s trying to reach the Oval Office by openly trashing millennial voters. Bold strategy — let’s see if it pays off for him. 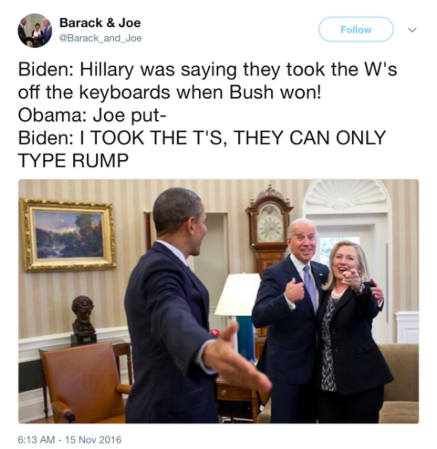 Biden’s tenure as a walking meme culminated in the dark, uncertain days between Trump’s 2016 electoral victory and his inauguration the following January, with a slew of fictional dialogues that saw Joe plotting various pranks against the president-elect. There was a small pleasure to be had imagining these scenarios and Biden’s capacity for juvenile mischief, though in retrospect, they look like the first stirrings of impotent liberal “Resistance” — the fantasy of opposition instead of direct action, retweets instead of organizing and the mindless elevation of anyone who happens to not be Donald Trump.

The last of those is Biden’s biggest advantage in the race. His platform is beside the point, since while none of the Democratic candidates are Trump, he may be considered the most not-Trump: a symbol of the relative normality that directly preceded this administration. The mistake, of course, is interpreting this inflated likability as “electability.” Because how likable will he be as a candidate, not a caricature, when his past gets picked apart again and his every utterance is underneath the microscope?

I’d just as soon not find out — and hold on to the endearing lie.