An Oral History of ‘Star Wars and Other Galactic Funk’ — The Disco From a Galaxy Far, Far Away

The song was a monster it. It topped the Billboard Hot 100, holds a Guinness World Record and is wholly responsible for launching Jon Bon Jovi’s cousin

In light of The Rise of Skywalker attempting to cram too many feel-good vibes into a franchise on the verge of irrelevance, perhaps we should look at another piece of Star Wars content that did the same, but successfully. I’m talking about, of course, Meco’s 1977 album, Star Wars and Other Galactic Funk.

The album seems absurd in hindsight. Its off-brand astronauts and funky beats are particularly cheesy, even for being released at disco’s peak. Yet despite all that, the album was a huge success. It topped the Billboard Hot 100 in October 1977, holds the Guinness World Record for Best-Selling Single of Instrumental Music and is wholly responsible for launching Tony Bongiovi’s Power Station, a production studio where Sting, Paul McCartney and many more would go on to record (not to mention, the place that would launch the career of Tony’s cousin, John Francis Bongiovi, or as he’s better known on the pop charts, Jon Bon Jovi).

None of it would have happened, though, if a 39-year-old trombonist — still going by his full name, Domenico Monardo — hadn’t made the time to walk 20 blocks to the nearest theater in Manhattan showing a new sci-fi adventure called Star Wars.

Meco Monardo, 2005 interview with TheForce.Net (edited for grammar and clarity): It was the greatest movie I’d ever seen in my life, so I went back the next day and sat through three more showings in a row. It was the third time when I finally heard the music. I was humming and whistling it like crazy when I left the theater. So I had an idea: Because everyone wasn’t going to be able to get enough of the movie, they were going to want to dance to it, too.

As a cocky record producer, I picked up the phone and called two record company presidents. The first tells me to get lost. The second says he wants to see the movie first. A few days later, he calls back: “You know, you might be right. Here’s a few bucks, go make an album.”

Meco, 1999 interview with Disco-Disco.com (edited for grammar and clarity): [My first move was to] hire two co-producers, Tony Bongiovi and Harold Wheeler. [Then] I called 20th Century [Fox] in California, and introduced myself. But they didn’t know who I was. I said, “Can you PLEASE give me the score?” They said, “No, no, no. It’s not something we can do.” I hung up the phone, and I immediately called the local florist and had a dozen red roses sent to her. I got the score within two days. [Note: This story is uncorroborated.]

David Spinozza, guitar: If memory serves, Harold Wheeler took his cassette-tape recorder to the movie and recorded the entire soundtrack. Then he went home and transcribed all the themes and did the arrangements. He deserves a lot of credit.

Cliff Morris, guitar: He wrote the whole thing in four hours. And he wrote it beautifully.

John Tropea, guitar: They wanted to get a jump on the release so they could get it out while the movie was out. So maybe they recorded it as they were getting permission to get a jump on things. That probably helped it become a hit.

Meco: I wanted to recreate John Williams and the London Symphony’s power, and of course, the [most popular form] of music at that time was something they called disco.

To do so, Meco, Bongiovi and Wheeler assembled a massive orchestra of 70 or so of New York’s finest session players at MZH Studio in Manhattan. This wasn’t an official band with an official pedigree, but the session players in 1977 New York were a highly skilled (and tight) group. Thus, when Meco invited all of them to MZH — a small studio known more for recording commercial jingles than full albums — it might as well have been any other day in the business.

Morris: Radio and TV commercials were the bread-and-butter of our business. We’d go from one studio to the next, not knowing who was told to show up at a particular place or time, or which guitar to bring. That was the job. So when I got the call for this project, I went in totally blind like it was any other jingle — no rehearsing, no music in advance, you just showed up and hoped for the best.

Tropea: We all saw each other two or three times a week, not the same combination, but it was all the same clique.

Spinozza: I was doing 15 recording sessions a week at that time, but had worked a lot with Tony and Meco so we knew each other well.

Neal Jason, bass: It was a little team, a lot of lifelong friendships were formed in those days. I must have been 24, and a lot of the guys in the room were legends to me. So to record an album with them — not just a jingle, but an album, you can’t have much more fun with your clothes on.

Meco: Everybody loved what we were doing because it was so fun and interesting, and at that point, the movie had started to pick up momentum. All the musicians knew about the phenomenon that was growing called Star Wars so they were thrilled to be playing on it.

Spinozza: Not to sound snobby, but there was a lot more interesting sessions going on at that time. Most of the session musicians weren’t big fans of disco music. It was a fad.

Tropea: Not to put down disco, but we were playing it all the time in those days. It was so routine for us to play on records like that, that it just felt like another record.

Jason: It was a room full of great musicians, but at the same time, there was a lot of money and careers on the line; every second wasted was a dollar wasted. So there was some pressure, but that only makes you better.

Tropea: The only difference between this and any other album I’ve done is that we did the whole album in two days. We went very late into the evening to get it done in time.

Meco: The Star Wars band was very big from anybody’s view, all live in the studio at the same time. Nobody used that kind of orchestration.

Morris: We were all going on at the same time, and I have no idea why. They just wanted a big sound, I guess. But it was definitely a wild and fun time. In fact, it’s funny, it’s one of the few sessions I remember of the thousands I’ve done.

Tropea: Many of us hadn’t seen the movie before recording, but we knew we were doing some kind of quirky futuristic disco thing. I think I’d seen or heard the Cantina band scene in a promo. It was almost like a Dixieland groove, so when we played that particular cut, I knew what to expect.

Jason: They were treating it like a movie score where lots of different parts and sounds had to come in and out right there on the spot. It was probably more cost- and time-effective to do it that way.

Tropea: Harold really wrote the music out well. There was barely any wiggle room. We played what was on the paper. So it was a combination of having the right hired guns, and him writing it out correctly as to why it went as well as it did.

Jason: There were extremely long charts. We’d have to shift over four music stands in a rolling chair to keep track of where we were — and then back again.

Tropea: I remember improvising something on the guitar that wound up sticking out on the record, which was surprising because with a big orchestra like that, you often don’t end up hearing the guitars. But I was using a digital delay, and I slapped the guitar strings, then slid the neck of the guitar head down, which the digital delay repeated. So it goes peow peow peow.

Meco: John Williams’ score was wonderful, but it wasn’t a re-creation of the movie. So, how could I recreate the movie aside from putting in the voices of people? I was left with the sound effects, which was even more important to me. But I couldn’t get them released from Lucasfilm. The R2-D2 sound effects, spaceships and all that — they were never done before. It was all brand new stuff, and it was hard to recreate.

Morris: They spent a lot of time trying to capture R2-D2’s sound.

Suzanne Ciani, special musical and sound effects: The Buchla, which is my specialty, is one of the first analog modular electronic music instruments created. It has a lot of individual modules, filters, envelopes, oscillators and frequency shifters, and you use that to design a sound. I made spaceships on Starland Vocal Band’s “Afternoon Delight,” so I knew that was a thing that the Buchla could do.

I can’t remember if I’d seen the film or if they’d just played me the film sounds. In those days, we didn’t have computers to just listen to stuff and pull from it. So if you were trying to make a laser sound, you’d probably have to filter high and use a white noise or maybe a calm filter that could specify the range of the noise very accurately. You might also use frequency modulation in the filter to give you a little sizzle. And you might add in an oscillator sound to give it a pitch. Needless to say, it was all from scratch. 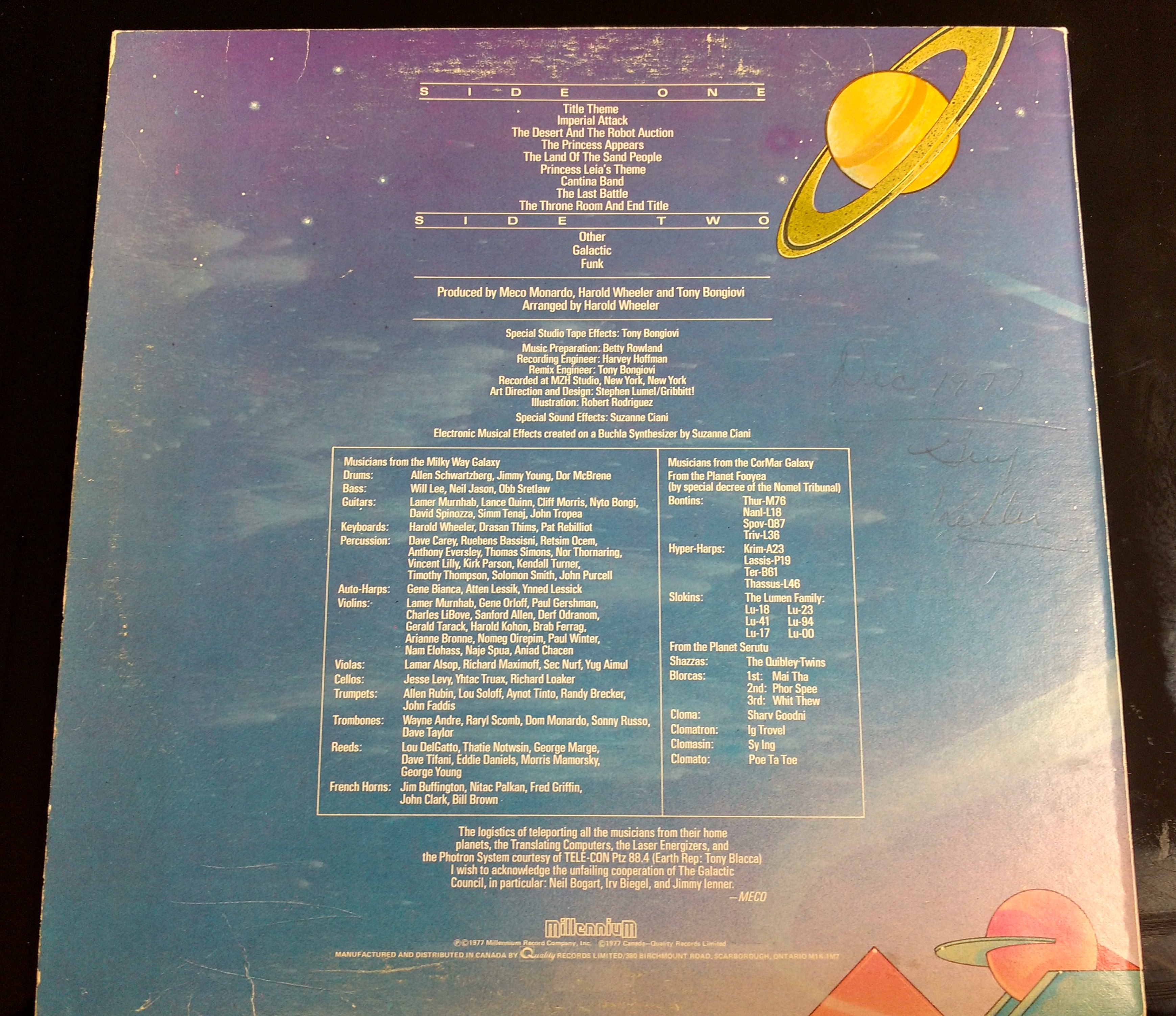 With his sound captured, Meco now needed to act fast. The longer it took for his album to be released, the further Star Wars would be from people’s minds.

Tropea: After two days in the studio, I think it was out on the market within two or three weeks. Which is very fast, a normal disco album might have taken, from start to finish, two to three months. This was done about as fast as you can do it.

Ciani: It was immediately huge. It was pure genius, just pure genius. These guys took something and made it into a musical genre that was exploding at the time. They were ahead of the curve and right on the money.

Meco: Needless to say, it went out about two months after the movie was out. John Williams’ single was already on the charts and doing very nicely for a symphonic single at that time, but I passed him and went to No. 1 — No. 1 in the world. Overall, it sold 2 million copies. That’s a Platinum certification from the Recording Industry Association of America. It turns out that I’m the only instrumental artist who has ever been certified as a 2 million seller. Even in the States. I’m real proud of that fact.

After 1977, Meco’s name was as hot as Star Wars, but unfortunately for him, interest in disco was already beginning to fade. So while he made four more albums with the same ensemble, none of them did nearly as well as Star Wars and Other Galactic Funk. But the fatal blow came in 1999, when a new rush of Star Wars fandom was sweeping the nation thanks to the prequels, and Williams added a specific clause in his contract to prevent any re-creations or interpretations of his music.

We will forever be deprived, then, of a disco Jar Jar Binks.