“Sixteen weeks,” explains architect Evan Williams. “We had 16 weeks to turn an old, 140-room hotel into the first Sandals resort.” The year was 1981 and Gordon “Butch” Stewart, a businessman completely new to the hotel industry, had just recently bought the old Bay Roc hotel in Montego Bay, Jamaica. A popular spot in the 1950s, by the early 1980s, the Bay Roc had been closed for more than half a decade and fallen into disrepair. Stewart hired Williams, already a prominent architect, to transform this relic into the most ambitious all-inclusive resort in the Caribbean. It was from this pairing — a resourceful architect and a confident businessman driven by gut — that the first swim-up pool bar would come into existence.

Or at least, what some consider to be the first swim-bar: Its first appearance is actually something that seems to be in dispute. Because according to Punch, the swim-up pool bar first arrived in a not-too-surprising vacation spot — Las Vegas. “In the 1950s, Las Vegas hotels and casinos began to compete with each other, and since the rooms were all pretty similar, the pool became one of the main features they could do that with,” architect Stefan Al tells me. In his book The Strip: Las Vegas and the Architecture of the American Dream, Al chronicles the early days of these pool wars, when properties resorted to all kinds of gimmicks to get more gamblers in the door. In 1952, for example, The Sands introduced floating blackjack tables, floating craps tables and slot machines by the edge of the pool. To follow suit, the Tropicana, which opened in 1957, also had floating blackjack tables as well as a floating tiki bar.

That floating tiki bar may in fact have been the first true swim-up bar, born out of the spirit of competition in a burgeoning new city. That wasn’t the only motive, of course. Al explains that all of these pool-related features were really about monetizing the pool, since despite being a big selling point of the venue, the pools themselves didn’t actually make any money. A swim-up bar neatly solved that problem.

Anyway, if that swim-up bar at The Tropicana was the first one, then the credit for its invention likely belongs to the late architect M. Tony Sherman, who designed the property.

Some, meanwhile, credit Acapulco as being the home of the world’s very first swim-up bar. It may have come about in 1971, with the construction of The Fairmont Acapulco Princess or perhaps even in 1976 during Acapulco’s renovation following a massive earthquake, although the latter seems harder to believe. To be honest, without running the risk of getting DWIs all over time by visiting historical swim-up bars in a souped-up DeLorean, we’ll likely never know for sure where and when the very first swim-up bar came to be. It’s also very likely that, similar to many of humankind’s greatest breakthroughs — like the jet engine, microchip and selfie stick — the swim-up bar was invented more than once by people and events completely unconnected to one another.

However and whenever it came about, it’s pretty clear that the one at Sandals in Montego Bay is the one to really make the swim-up bar a thing, and no doubt the one to popularize the concept. But before it spread across the world and became a symbol of hedonistic relaxation, Williams explains that back in 1981, the swim-up bar wasn’t some grand idea that he’d had in his head for years — instead, it struck him amidst the whirlwind of ideas he had in that 16 weeks to design the resort. “I had to redo lobbies, redo courtyards, redo guest rooms. I didn’t have the luxury of sitting down and designing it from afar; it all had to be done then,” Williams explains.

When it came to the swim-up bar, Williams says that throughout the construction process, he and Stewart had been in search of some sort of hook to make this resort stand out among other Caribbean vacation spots. Additionally, he had the problem of what to do with this odd round building that sat adjacent to the swimming pool. “Throughout my career in resorts, I’ve always looked for ways to make bars more interactive,” says Williams, referring to the fact that the simple bar set-up — where you can only talk to a friend on either side of you — is stifling to larger groups and other activities.

Because of this and the placement of this round building, Williams got the idea of carving large serving windows into the side of the building, turning it into a bar and letting people swim up to it and order drinks. Sensing that this could be the hook that they were in search of, Stewart instinctively approved the idea and Williams went about building the (maybe?) first ever swim-up bar. 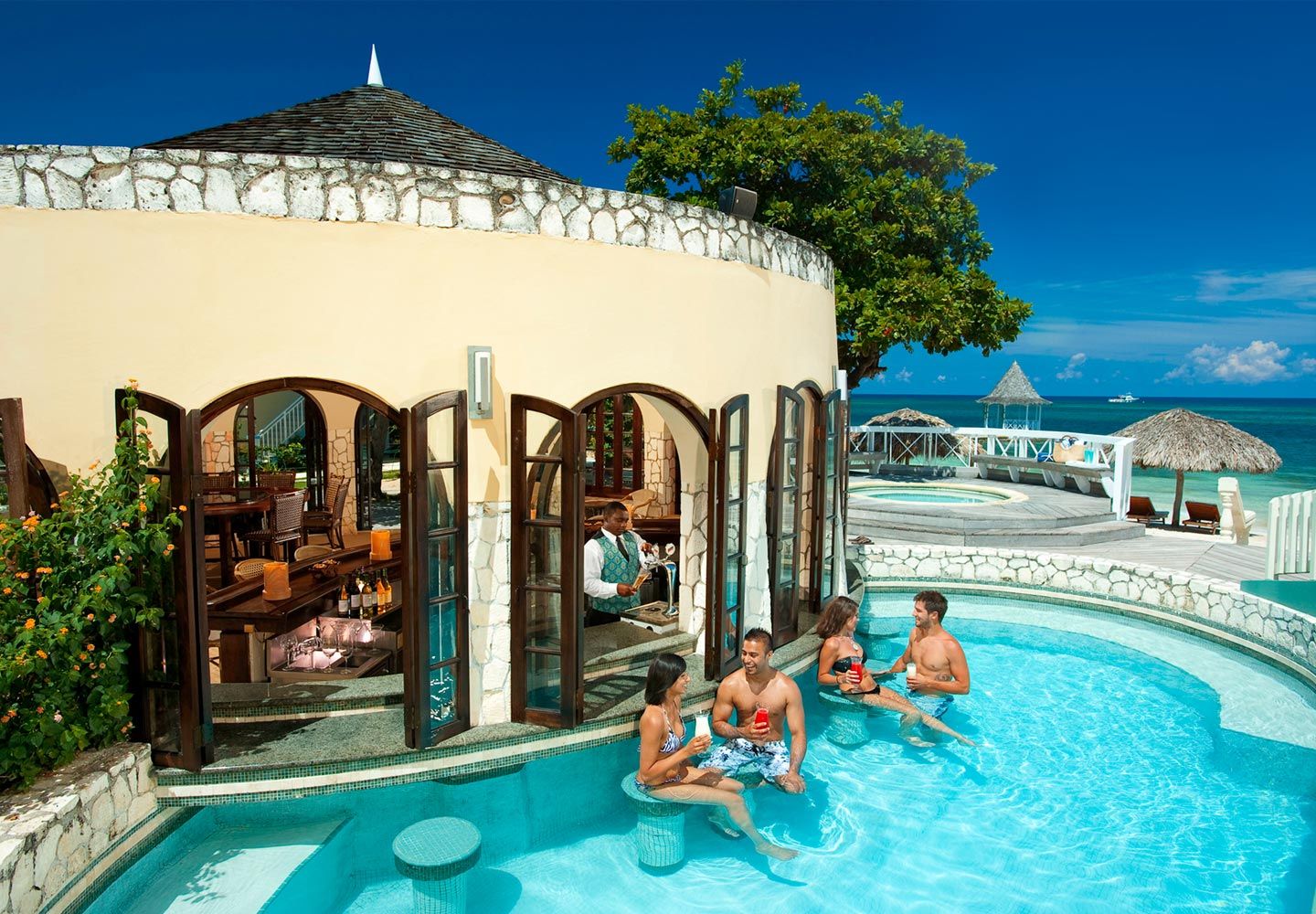 The swim-up bar, says Williams, became so popular among the couples and newlyweds vacationing in Montego Bay that they soon had to enlarge it, which happened during the 1984 expansion of the resort. (Adding confusion to the origins of the swim-up bar, some — including Butch Stewart himself — cite this renovation as when the bar first appeared at the property, but Williams confirms that the swim-up bar was there from the start in 1981, just a bit smaller.)

As Sandals grew throughout the 1980s, each new location had a swim-up bar as a staple. A massive marketing campaign led to an even bigger Sandals expansion in the 1990s, leading to more swim-up bars, more drunk people in pools and — inevitably — more people pissing in the pool. Which, really, are the only two negative traits about swim-up bars: Drunks and piss.

“When designing pools with a swim-up bar, I’m thinking about drunk people all the time,” explains Brian Cullingworth, an award-winning pool designer. Safety is always a concern when it comes to pools, but when building a swim-up bar, Cullingworth says he has to be extra cautious in the placement of things like steps and fences so that a drunk person can navigate the environment easily. Some pools with a swim-up bar also have a vault, which is the area on the other side of the bar where the drinks are served from. In some cases, Cullingworth explains that a drunk dude could get really hurt by falling four feet down into a vault, so usually obstructions have to be built to prevent that from happening. Williams adds, too, that it’s best for swim-up bars to not utilize drink glasses or breakable plastic, just so that no shards end up in the pool once people have had too much and start breaking shit.

Then comes the urine. We’ve already talked about where the piss goes when you pee in the pool — in short, it stays there — but when in a pool with a swim-up bar, one should expect more urine than usual. “I don’t think there’s ever been a study about urine in pools with swim-up bars, but common sense would say that it would have a decent amount more than usual,” says Eric Herman, senior editor of Aqua magazine. “I remember I saw a guy in Vegas once sit at a swim-up bar for like seven hours straight, and you can’t tell me that guy hasn’t peed in the pool five times or so after having eight margaritas.”

Williams agrees, saying that pools with swim-up bars really need signs saying, “Please don’t urinate in the pool.” Since the whole reason swim-up bars exist at all is because people don’t want to get out of the water — and since people erroneously and grossly believe that their piss will just dilute away in there — you can expect that any swim-up bar has as much, if not more, urine than that public pool swarming with pissy little kids. Try not to think about that next time you’re posting #swimupbar on your Instagram to make all your friends jealous.

Despite the potential for injury and the excess of human urine that come with swim-up bars, they have proven to be wildly popular just about everywhere. If you Google “best swim-up bars,” you’ll find the Travel Channel citing swim-up bars from Costa Rica to Croatia to Spain — even Iceland’s got a pretty awesome-looking one. Trips to Discover tout swim-up bars in Barbados, Egypt, Thailand and Fiji. You can find them all over the U.S., too — not only in predictable places like Vegas and Southern California, but also in Wisconsin and Arizona. Domestic swim-up bars vary in style as well, from Manhattan’s swanky nightclub DIP Aqua Bar & Lounge to Flannagans, a swim-up bar in Dublin, Ohio, that looks less like an all-inclusive resort and more like an Irish dive bar where they failed to address the leak.

Due to their popularity in vacation spots, swim-up bars have even made their way onto residential properties in the last few decades. Both Herman and Cullingworth each say they first saw a residential swim-up bar around 1991 or 1992. As Herman explains, “There’s kind of a natural progression to these things. Features like this start out in resorts, then get adapted by people of means, then find their way to the middle class.” And while swim-up bars are far from standard for middle-class American pool owners, they are becoming more and more common as a feature, along with things like the vanishing edge and the tanning ledge.

Aside from just seeing these bars on vacation and wanting to replicate the experience at home, people began adding swim-up bars to their homes for two other very disparate reasons: Technology and terrorism. Cullingworth explains that in the late 1990s, there was a breakthrough in the art of pool design thanks in large part to new computer programs being developed that not only could plan things out, but better help potential buyers visualize what their home would look like with a custom pool. Herman adds that there was a magazine he co-founded around this time called WaterShapes, where the pool began to be studied as a piece of serious architecture. “I think the magazine helped contribute to this, but it also reflected the great work that was already going on in pool design,” he explains.

Strangely enough, Cullingworth believes that 9/11 also contributed significantly to the rise of the customized swimming pool, many of which included swim-up bars. “There was that period of time following 9/11 — which lasted for a couple of years — when people didn’t want to travel anymore. Everyone was nervous and instead of flying, they decided to do these ‘staycations,’ where everything was right there at home for them and their families. The pool industry and the home theater industry spiked after 9/11 and it stayed that way for a number of years.”

What halted it, according to Herman, was the recession — that’s when things slowed down for the pool industry and WaterShapes went online-only. Since the recession ended, though, Herman says the industry has picked back up considerably.

“The swim-up bar is always going to be a somewhat expensive feature, though,” Herman admits. He’s not wrong: At the very least, you’re going to have to tack on a good four or five grand on top of whatever the pool is already costing you to add a swim-up bar, and that’s just for the basics. For this reason, Herman doesn’t foresee pool bars ever becoming totally mainstream, especially when much of the country can only use a pool a few months out of the year. So, if you’re looking forward to the day when everyone — even you — has a swim-up pool bar in their backyard, you probably shouldn’t hold your breath.

Instead, you’re still going to have to save your money all year and hit up a resort for the opportunity to wade in generous amounts of urine while enjoying your favorite cocktail.