A Eulogy for the Buff Kangaroo, Carbon Sucking and Criticism in the Bedroom

I’m going to keep this short and sweet because I need to get to the gym, stat. It wasn’t until I read this Miles Klee ode to Roger, the now-deceased beefcake kangaroo, that I realize just how much I’ve been shirking it in the weight room. Just look at this absolute unit: 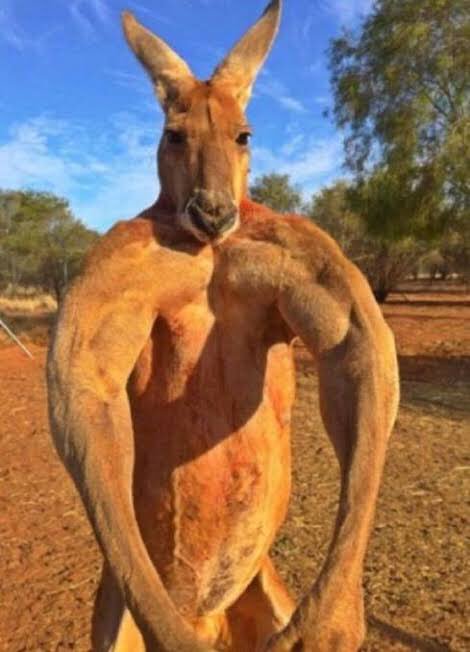 I know I will never match this physical specimen in sheer size or power, but I sure as shit can’t have my lady friends wishing I was “more like Roger.”

“RIP, Roger the Kangaroo, the Impossible Masculine Ideal”
It is with a heavy, muscular heart that we announce the passing of Australia’s most jacked kangaroo, Roger. Before the buff marsupial passed away this weekend in Alice Springs, Australia, his sinewy 6-foot-7, 200-pound frame was the symbol of an outsized machismo that few people could hope to match. No, seriously: He made the rest of us look really, really weak. READ MORE

Robots to the #MeToo Rescue

Here’s an interesting idea: In lieu of actual due diligence, a new tech company wants to use AI and social media “listening” software not only to police workers and predict performance, but also to help companies weed out especially risky applicants like serial sex offenders. Not that most brands don’t need a massive revamp in how we assess and hire potential employees, but it’s hard not to get the feeling that using machine learning might not work out as well as we think.

Speaking of people over-promising only to most likely under-deliver, Swiss company Climeworks wants to use something called Direct Air Capture Technology — essentially an atmospheric vacuum, run on renewable resources — to suck all the carbon out of the air. Sounds great, right? It is — but it needs a lot of work.

You can have too much of a good thing, and Santa is no exception. That’s because there’s a fine line between keeping the Santa myth going just as long as your child still believes, and going balls-to-the-wall lying about that jolly fat ass from the North Pole. So how far should a basic dad push this Santa thing? We asked a psychologist, a children’s book author, a mall Santa and others for advice on when it’s time to hang up the milk and cookies.

Put a Ring on It?

Engagement season lasts from November to February, but like the diamond on a bad ring, the sting of rejection lasts forever. Here’s how to know if it’s meant to be.

We Date From the Future

You might look at the state of online dating and think, “We’ve done it: We’ve successfully digitized the courtship ritual.” But in reality, you haven’t seen nothing yet. In fact, the future of online dating, with its VR dates, AI wingmen and DNA matchmaking is going to blow your fragile mind.

You want to have great sex, right? Of course you do. So why do we find it so difficult to communicate our wants and desires in bed? Here’s a free piece of advice: Don’t. Not in bed, I mean, at least until you’ve opened a dialogue.

But that’s just the tip, so to speak. Because we spoke to a sexologist, a psychologist and more about other great ways to give and receive constructive criticism when it comes to doing the nasty.

We’re in This Together

Relationships in general already take lots of work to maintain, but living with someone who suffers from a mental illness can make them an immense challenge. Which is why being a supportive partner with a plan of action is incredibly important. And the best way to be your most supportive self is by learning from and taking the advice of people who help their partners cope with mental illness on a daily basis.

Doctors have long sat in the front row as gun deaths, gun injuries and the deadliness of mass shootings have increased in recent years. So when the National Rifle Association mocked doctors to “stay in their lane” and questioned medical gun violence research in late November, waves of MDs took to social media to detail stories of gun victims and advocate for policy change. And that’s been an unforced error for the NRA, because this movement is just beginning to pick up steam.