A Bumpy History of ‘Ribbed for Her Pleasure’

Or: The Lost History of Ribbed Condoms, and My Quest to Find the Truth

Even the Museum of Sex doesn’t know where ribbed condoms came from.

“Sorry, we don’t have that information,” I was told after an extended wait on hold. I also found no actual results for “inventor of the ribbed condom” on Google. Undeterred, I reached out to a few people who have written professionally about the history of condoms, but they didn’t know either. Everyone seems to know about the overall history of condoms, all the way back to when cavemen strapped beaver pelts to their boners, yet no one seems to know when they started putting little bumps and ridges on those things, specifically for her pleasure.

Never one to give up on something entirely stupid, I did some digging of my own, starting with a Google Books search — which tracks words and phrases over the past 150 years or so — and a search through a database of old newspapers. It was there I discovered that 1977 seemed to be the breakout year for ribbed condom ads, as they showed up in both Playgirl (expected!) and The Morning Herald in Hagerstown, Maryland (not so expected).

Still, there were no huge newspaper headlines reading “SCIENTIST INVENTS RIBBED CONDOMS: WOMEN REJOICE!” so where exactly it came from was still a mystery.

Naturally, it was the phrase “ribbed for her pleasure,” more than the device itself, that started me on this quest, but this, too, was fairly elusive. All I wanted to do was find out how that phrase came into the American lexicon before it ended up as a legendary line in Wayne’s World:

And now, a fairly popular meme:

While I figured that it had just been a Trojan slogan from yesteryear, it appears that it actually first started showing up in the late 1980s, under the condom brand PRIME (which until now I’d never heard of). LifeStyles condoms seemed to be using a similar slogan a few years earlier, as an Australian paper from 1983 mentions LifeStyles’ “Stimula” condom, which was “vibra-ribbed — designed for her pleasure.”

The phrase “ribbed for her pleasure” obviously took on a fairly large upswing after 1992, when Wayne’s World was a smash hit and the eighth-highest grossing movie of that year. The movie never really went away, but when the 1990s became cool again in recent years, Wayne’s World deservedly went along for the ride, and it remains the one awesome exception to the veritable graveyard that is films based on Saturday Night Live sketches (despite being on that IMDb list, Blues Brothers doesn’t count because they weren’t an SNL sketch first, but I digress…)

Wayne’s World also falls into that lost genre of a truly quotable film, like The Big Lebowski and Anchorman — back when guys quoting movies to each other verbally was the only option in a no-meme world. So along with lines like “we’re not worthy,” “ribbed for her pleasure” just stuck around. 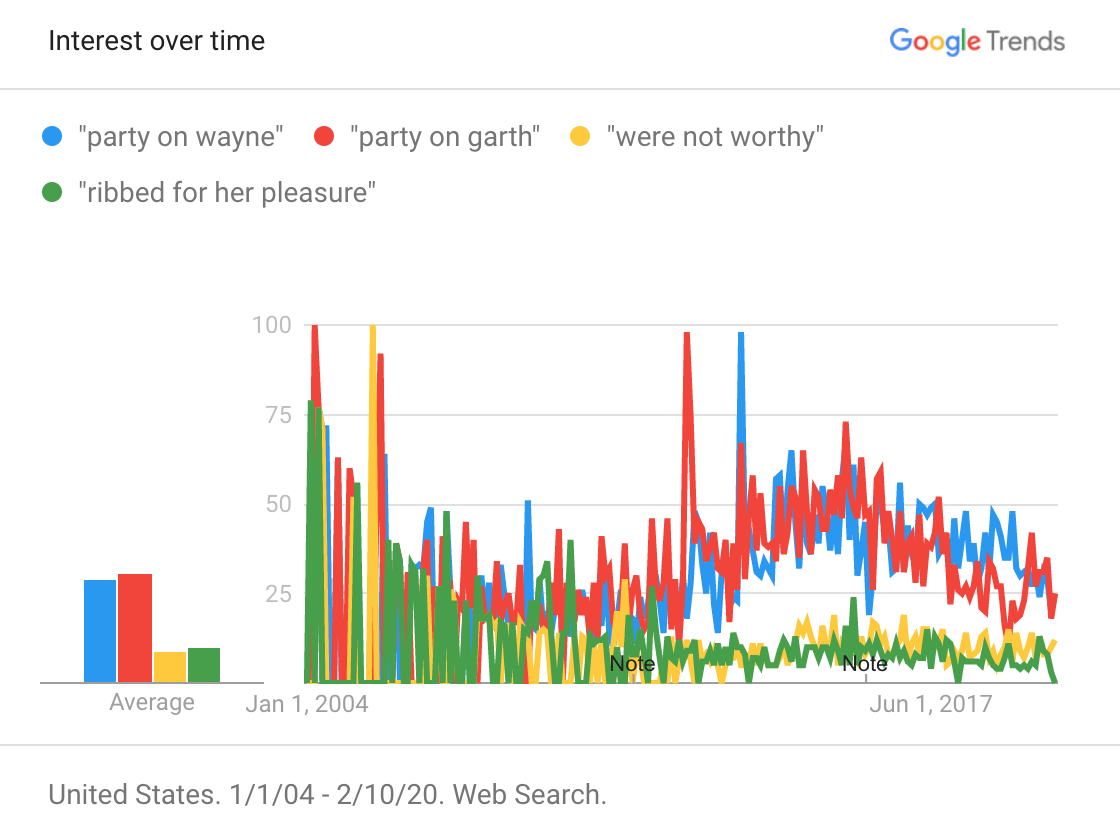 Because it was both a well-known slogan and quote, Know Your Meme’s editor-in-chief Don Caldwell believes that it naturally would’ve become a meme in our current culture. And in fact, as alluded to earlier, it has anyway, nearly three decades later. In addition to Reddit threads using the quote, Caldwell also credits another meme about the phallic nature of corn — “country girls make do” — for its popularity, with many of the “ribbed for her pleasure” memes centering around corn, which is, of course, bumpy, much like these bumpy robots and this bumpy Star Trek character and those mysterious ribbed condoms that no one seems to know anything about.

Getting back to those bumpy condoms: I finally hit paydirt a few days later, when I stumbled across a court summary from a lawsuit that occurred in 1979, when Schmid Laboratories sued Youngs Drug Products for trademark infringement. Schmid, which was the parent company of “Excita” condoms, alleged that Youngs — the owner of Trojan — violated their trademark because Trojan had used the word “ribbed” to describe their condom, while Schmid had trademarked the phrase “SENSI-RIBBED.”

In that summary, I found that Trojan began selling a ribbed condom in 1977, while Excita began doing so in 1976. Ultimately, Trojan won that lawsuit, as it was found that “ribbed” was merely a description, widely used in the industry by many companies and thus not a trademark violation. Instead, it appeared that Excita was only suing them for the publicity of taking to court a more well-known brand, as Youngs had alleged.

But, in the midst of all that boring legal stuff, I found something fairly exciting (to me, at least). Halfway through the document, this sentence appears: “While plaintiff was the first company to register a trademark for a ‘ribbed’ condom, it appears that a third company, Akwell Industries Inc., was actually the first to market this particular type of condom.”

Now I had what I needed. While doing a search for patents can be a huge pain in the ass, since I knew Akwell Industries had developed the item, I had some search parameters. I also figured that they were likely invented sometime in the 1970s, since that’s the decade those ads started appearing. Fortunately, those two bits of info were all I needed, as finding the patent proved to be rather easy. Here it is, bumps and all: 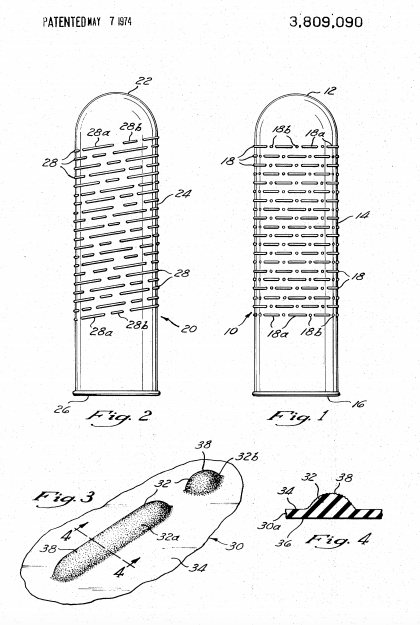 Turns out, this patent was registered back in 1972 by Akwell Industries — parent company of LifeStyles condoms — which at one point did have the world’s only ribbed condom. They named it “Stimula,” the same name I’d found in that 1983 Australian newspaper. Akwell was also the company that owned PRIME condoms, which was the company that first used “Ribbed for Her Pleasure” as a slogan back in the late 1980s. So both ribbed condoms and that saying all go back to Akwell.

As for the actual inventors of the ribbed condom, the patent credits L. Povlacs and W. Crawley. Povlacs’ full name is Lawrence Povlacs and in addition to co-inventing the ribbed condom, he invented a bunch of other stuff while working for Akwell, some condom related, and some not as Akwell made other medical supplies as well. After a lifetime of success as an engineer in a variety of ventures, Povlacs passed away in 2014. His obituary mentioned his ingenuity, though it disappointingly didn’t credit him as the co-inventor of the ribbed condom.

Crawley’s full name was William B. Crawley but that’s all I was able to find out about him. While a bunch of other patents belong to William Crawleys, none seem to be him, so it’s tough to say what else he was up to and whether or not he’s still alive.

Still, the one thing I do know for sure is that Crawley, along with Povlacs, deserve the credit for bumpy condoms, quite possibly a lot of female pleasure and the greatest “Ewww” in cinematic history.