Chan Culture Is Eating Itself Alive Over the Abortion Debate

It's a terrifying glimpse inside the rabid, frothing id of the anti-abortion movement

Whenever hard-right politics erupt into the national consciousness, well-known Republicans are expected to make the case for the medieval policy at issue: Yes, we should throw migrants in concentration camps, take away people’s welfare, start another imperialist war. But they have to spin these cruelties to mask the motives and to make the outcomes palatable. The media relies on a thin approximation of good faith.

Meanwhile, you can bet that a more grotesque parallel to this sanitized argument is playing out on 4chan (especially its /pol/ board) and 8chan, a spillover forum that has become a haven for neo-Nazi ideology and related extremism. On these sites, there is no need for the disingenuous language of a lawmaker defending, say, an unconstitutional abortion ban as “pro-life.” They can come right out and say what the right actually believes: Women should be punished, and their bodies must be controlled. 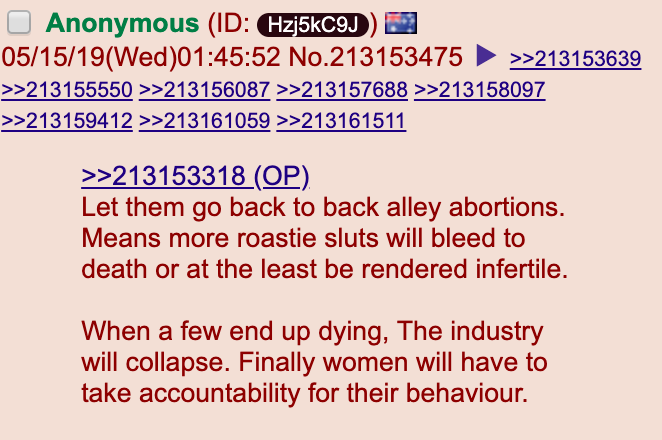 But even as misogyny and a generic malice toward the left provide reasons for the channers to celebrate new restrictions on women’s autonomy and healthcare, the many shades of hatred make for strange crosscurrents. Where abortion is concerned, the cause of racism can sometimes take precedence over sexism. In particular, the white supremacists who haunt these sites have expressed concern that several states passing unscientific “heartbeat bills” to curtail abortion — Mississippi, Georgia and Alabama — are also home to large black populations. Nationally, the abortion rate is higher for African-Americans than any other ethnicity, and that gap widens radically in the Deep South. Therefore, the Pepe Nazis claim, these laws will naturally mean an explosion in birth rates for a group they would rather see wiped out. This automatically triggers their worst fear: the decline of White America and “Western” civilization. 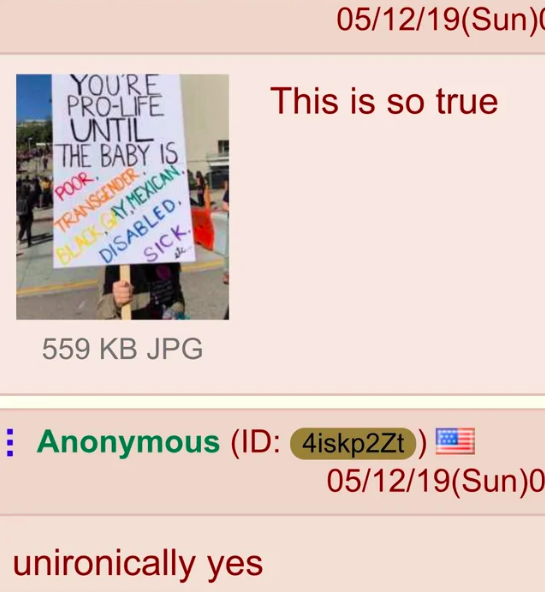 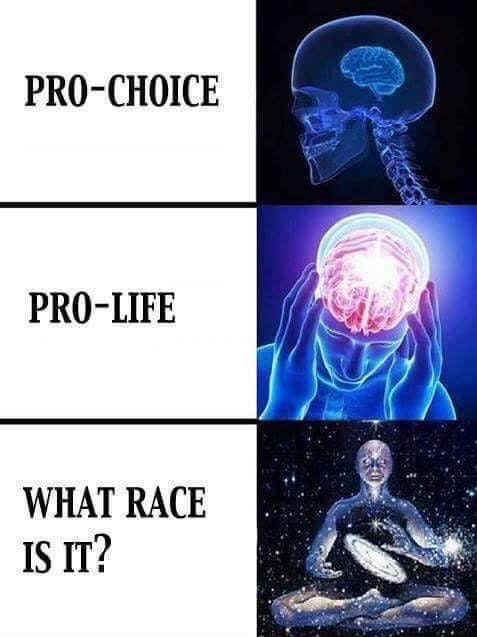 These guys are furious at “cuckservatives” and “christcucks” who, in their view, have cut off their nose to spite their face — which is sort of funny, given that these anti-abortion legislators represent the very white culture the neo-Nazis believe they’re protecting. Because white supremacy’s ethos is already bound up in pseudo-Darwinian ideas of procreation (think of the infamous 14 words demanding “a future for white children,” or openly fascist Rep. Steve King tweeting that “somebody else’s babies” are a threat to America’s destiny), its proponents are locked into the counterintuitive stance that everyone except whites should have the right to abortion on demand. Forced birth is fine insofar as it continues “Aryan” bloodlines, but no further. Lacking any means, let alone a mandate, to regulate pregnancy along racial lines, state governments will never prohibit abortion in a manner that satisfies this hateful dogma. So, better not to try at all.

Neither 4chan nor 8chan has ever been a political monolith; any need for consensus is outweighed by an insatiable appetite for infighting and trash talk. Free-floating nihilism and “irony poisoning” make it difficult to ascribe intent or belief to a random user (even if the outcome is depressingly similar either way). Still, the abortion schism is an unusual show of polarity within these forums, as well as a measure of their evolving role in reactionary online discourse. Once upon a time, the topic was mere fodder for offensive jokes, a hot button you could push to collect easy lulz. There would’ve been no sense that this toxic junk might seep into the mainstream via commentators who laundered and weaponized it for a bigger audience. The old /b/ was all about shock value: 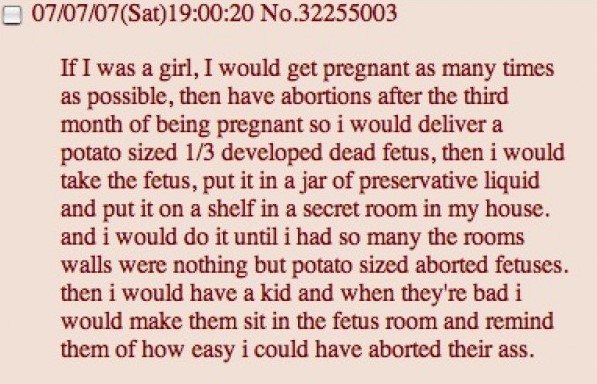 This changed around the time of Gamergate, then the Charleston church shooting and throughout the 2016 election, when an axis of shitposters took credit — undeservedly, but loudly — for propelling Trump to the Oval Office. During that campaign, Steve Bannon, then executive chairman of the far-right website Breitbart News, tasked editor Milo Yiannopoulos with harnessing the raw potential of the “meme team” while creating a firewall between the brand and its de facto staff of 4chan recruits. Other ideologues with social media megaphones took what material they needed from this murky corner.

As Whitney Phillips, a professor who has long studied trolling, writes in The Oxygen of Amplification, an essential guide to responsible reporting on internet antagonists, political memes produced by the channers in the interest of naked provocation are “adopted earnestly by sincere political operatives.” This is why no daylight exists between the idle, just-for-kicks bigotry and the narratives spun by bad actors who have figured out how to profit from this garbage.

And the true believers have arrived. By this point, 4chan and 8chan are sites of genuine radicalization, breeding ground for stuff the president’s dumbfuck son shares gleefully on Twitter. Adjacent networks and personalities — like YouTube and Joe Rogan — help funnel newcomers into the abyss with propaganda-friendly algorithms and a version of “free thought” that is always decidedly anti-left. When the fresh converts do finally click into the chan forums, they’re well down a path from edgy irreverence to ethno-nationalism and misogynist terror, the community itself having modeled this transition in the last few years. The assumption here — completely opposite to 4chan’s old credo of unseriousness — is that the stakes are real.

And just as you observe friction between the sexist and racist elements of chanworld, there are opportunities for different strands to entwine. The incel — an angry, “involuntarily celibate” man who feels entitled to the gratification he says women have denied him — happily appropriates anti-abortion rhetoric to illustrate the grievance. He would have a lovely girlfriend, see, if she simply hadn’t been aborted. Whether this constitutes an earnest thought experiment scarcely matters; incels mostly want to wallow in self-pity and punish women for having sex with anyone who isn’t them. Criminalizing abortion, in their minds, would mean that knocked-up “sluts” face a lifetime consequence for their promiscuity.

Apparently they don’t agree with conservative Christians that this is the most practical mechanism for achieving a near-abstinent country, yet the “aborted gf” concept is a clear echo of an anti-choice refrain popular in religious circles: “What if Jesus had been aborted?” These movements borrow from one another. 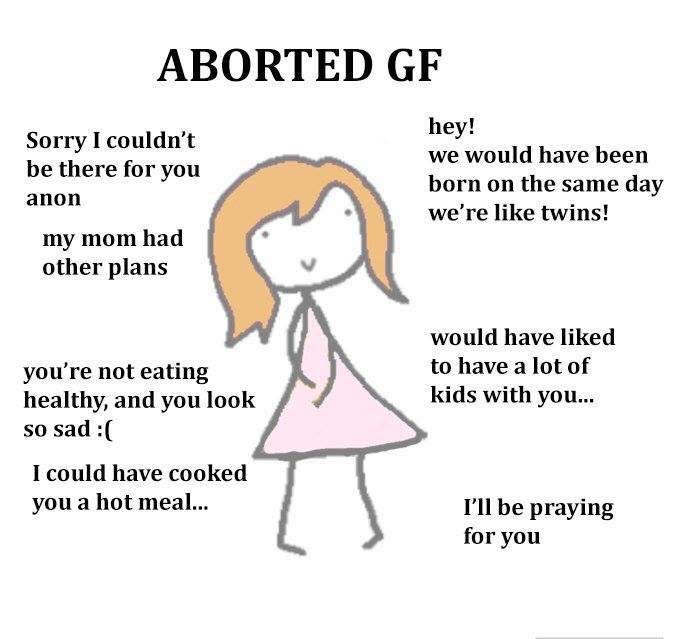 There’s no telling how these various factions will recombine, mutate or splinter on the abortion issue, but this much seems clear: The messaging is in flux, it’s likely to get nastier and it will not be contained to a niche. However you rate the influence of 4chan, 8chan and YouTube extremists on political reality, it exists. That they hope to capitalize on this escalating controversy, working in a volatile atmosphere of competing and suddenly relevant bullshit, is probably worth our concern.

You don’t have to worry that they’ll find themselves in complete alignment here — such a thing is unprecedented — only that a specific form of rage may hit a viral threshold, allowing a cynical spokesperson with a platform to exploit it. Anti-abortion violence is a longstanding problem, and we’ve seen how internet phenomena inspire attacks in that vein. It’s all too plausible that a 4chan thread could send someone to shoot up a clinic. Worse, the president has dared them to do it. The meme is calling from inside the White House.