How This Completely Silent Song From the 1950s Became a Meme

As music theory gets extremely online, John Cage’s infamous ‘4′33″’ is seen as the ultimate shitpost

On a warm August evening in 1952, in a small, unassuming barn in Woodstock, New York, music — or how we define what music is — changed forever. It’s hard to describe what happened that night, and even to this day, there are lengthy debates on what could really be heard. The attendees in the barn — some of New York City’s finest classical musicians, alongside philosophers and music theorists — had come to listen to the new compositions of John Cage, played by the pianist David Tudor. They’d probably expected a bizarre, perhaps slightly disorientating experience, but nothing would prepare them for what actually happened.

Tudor, with bright white hair and in a suede camel skin jacket, stretched his fingers, started a stopwatch, closed the lid of the piano and proceeded to sit in silence. After 23 seconds, he silently reset the stopwatch. Then, again, another minute later. After he reset the stopwatch for a third time and sat in silence for another 40 seconds, he left the piano altogether as the audience politely applauded him.

The composition was called “4′33″,” and it became Cage’s most famous work. But more than that, it turned into one of the 20th century’s most divisive musical compositions, so much so that even in modern music schools, there’s an ongoing debate about whether “4′33″” should count as music at all.

Cage was a classically trained composer who also engaged in music theory, art criticism, philosophy and essay writing. He had a reputation in the oft-austere world of classical music as being a renegade, known for incorporating elements of East Asian mystical chanting and the rhythmic patterns of contemporary dance into his work — influences that can be heard in compositions like “The Wonderful Widow of Eighteen Springs” (1942).

Still, with “4′33″,” Cage took things one step further — going from alternative sounds and natural, unpredictable rhythms to no sound at all. In his essay on Cage’s legacy, Mental Floss writer Lucas Reilly suggests several reasons for this. For starters, Cage’s interest in Buddhism and Dadaism, which aimed to make surreal art that “pleased — and befuddled — the mind.” But also, Cage’s issue with “Elevator Music,” background music designed to “drive out sound” and theoretically make workers more efficient. Cage had referred to Elevator Music (or “Muzak”) as a “cultural plague” that drove out the unexpected sounds that informed so much of his work.

“The appeal of ‘4′33″’ isn’t in the composition itself, but in what it represents,” says KASSE, a London-based producer whose work has appeared on some of YouTube’s most popular lo-fi compilations, such as Chilledcow. “There are some people who say it was an elaborate fuck you to the music establishment — and that might be true. But it’s also an example of how you can use a lack of sound to make someone feel.”

In fact, despite “4′33″” being nearly 70 years old, KASSE believes it’s as relevant as ever in experiential music. “It’s all about finding the unique sounds, clips and distortions that make your music memorable,” he tells me. “A lot of artists in the [electronic] scene use the same generic samples and processing techniques, but in an hour set, if you have 10 seconds where you have something new, people are going to remember that” — the lesson, for him, of “4′33″” and Cage’s work more largely.

It’s interesting, too, that “4′33″” has found contemporary relevance as a meme as well. Case in point: There are dozens of “4′33″”-themed Facebook meme pages, including “4′33″” Dangerposting, “4′33″” Theoryposting and “4′33″” uwuposting, where the composition is considered to be the ultimate shitpost — something that, one member of “4′33″” Theoryposting described as “so bizarre and overly intellectualized, while also appearing impenetrable that the only thing people can do is be mad about it.” 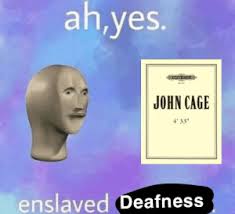 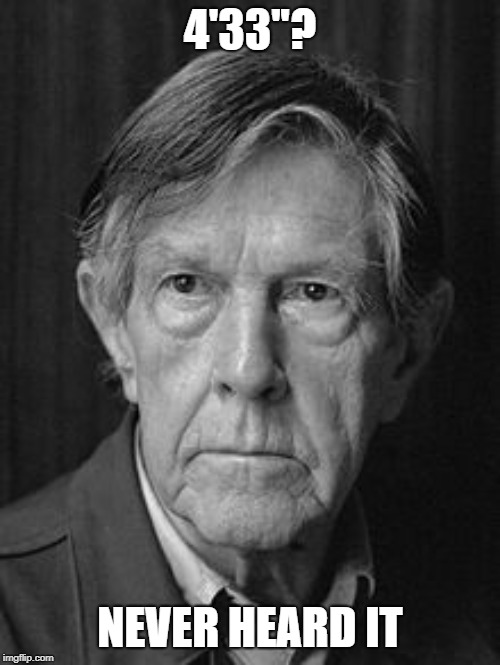 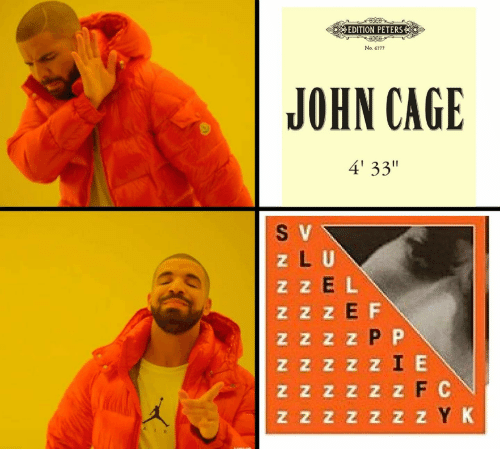 Meanwhile, on the subreddits r/classicalmusic and r/musicology, “4′33″” frequently splits redditors between those who view it as “abstract expressionism” and “performance art” that critiques high culture, and those who believe it’s a revolutionary form of music that aimed to get listeners to pay better attention to their natural environments (even if that’s people coughing or rain falling). This split is readily apparent on r/badmusicology (the tagline of which is “it’s mostly about ‘4′33″”), where “4′33″” is used as a derogatory term that represents the supposed decline of music in “postmodernity,” whereby members berate the emptiness of electronic and pop music and refer to Beethoven as “pure redpill.”

All that said, Gwilym Bowen, a London-based tenor and classically trained musician, thinks that while myth and intrigue will always surround “4′33″,” it’s more a product of its time, repurposed for the internet age, than something that perfectly cracks the code of what music is. “You can absolutely get into deep stoner conversation about what constitutes ‘music’ or ‘performance’ and tie in every philosopher you know,” he says. “Cage always spoke earnestly about ‘4′33″,’ but the movement he came from absolutely blended serious philosophical intent with a knowing, participatory absurdity.” Moreover, Bowen adds, “‘4′33″’ is notorious because of its simplicity. But it’s one of those ideas where there’s not really anywhere you can go further from.”

Many classical composers, however, have noted that “4′33″” presents an extreme example of the value of silence in subverting expectations and challenging the listener. Similarly, music theorists have argued that there are few pieces of music that have so masterfully blended theory, and that “4′33″” creates a truly sensory audio-visual experience.

Basically, then, Cage isn’t just utilizing silence to affect the audience, he’s asking whether it can exist at all. Or as he put it in the aftermath of Tudor’s 1952 performance, “There is no such thing as an empty space or an empty time. There is always something to see, something to hear. In fact, try as we may to make a silence, we cannot.”