‘Woke With a Hard R’: How the Right Created a New Dog Whistle

The word woke is now a funhouse version of itself — a weaponized expression of winking anti-Blackness. How did we get here?

Woke is no longer a Black word. In a matter of a few short years, it went from a soulful signifier of Black consciousness, to a sneering dog whistle of anti-Blackness used against anyone who might argue for a world where Black lives do, indeed, matter.

The word first blossomed in pop culture in an Erykah Badu track back in 2008. On “Master Teacher,” she breathily whispers about how she’s trying to find her way to a beautiful world (and herself). As the afro-crowned crooner goes on to dream about this world, she poses and answers a question: “What if it were no niggas / Only master teachers? / I stay woke.”

Throughout the rest of the song, Badu uses this refrain, “I stay woke,” imbuing it with a mystical yet practical meaning. It’s a way to speak to the dual social consciousness of Black Americans. We can never be just one thing. Even when we chase the American Dream, we must “stay woke.”

Soon thereafter, Childish Gambino helped the idea along with his track “Redbone.” Its lyrics: “If you want it / You can have it / But stay woke.” Throughout the early aughts and teens, the term remained in the popular Black lexicon.

Part of its popularity was how it could mean so many different things. Typically, though, it was either an earnest expression that Black people need to stay conscious of the agendas operating against us; or by telling someone to “stay woke,” it became an inside joke of the culture, primarily existing online between Black people, or used as an easy roast of someone at the beauty parlor or barbershop.

Then, Ferguson happened. After Michael Brown’s murder, the BLM movement leapt into the national consciousness. With it came wokeness, a culture unto itself. “Woke” soon started to serve as a shorthand among people calling for the world to wake up to the systemic racism that was causing Black men and women to become hashtags at an alarming rate. Next, as often happens, white people seized on woke as a handy catchall. As such, woke morphed into an online signifier, but one generally used by young, well-meaning white people who were urging others to become aware of the racist agendas operating against Black life. Woke became a semi-hip racist critique.

Quickly, though, woke also became the opposite. It became a polite slur, a dog whistle used to mock anyone who dares to suggest that American history and culture is racist, and argues that life in America should radically change based on that understanding. This new cultural meaning for “woke” helps to explain why, when Senator Josh Hawley recently lost a big book deal, he didn’t pause to reflect on the fact that he’d incited a riot in the nation’s capitol that claimed five lives; instead, he blamed “woke culture.”

Woke is now a funhouse mirror version of itself. It no longer refers to being aware of the agendas that operate against Black people, nor does it mean to stay conscious and present, or even skeptical. It’s been mockingly weaponized so that it can be an expression of winking anti-Blackness by someone like Hawley.

These days, woke functions a lot like when people say they hate disco. There’s a subtle, indirectness to it. It’s a sly way to attack a much larger idea (in disco’s case, pro-Black and pro-gay agendas of self-respect). “Wokeness” signifies what side you’re on. Being against “wokeness” marks that a person is against the recent advances of communities that have been historically kept from center stage.

“Wokeness” in this context is also an update of the tired, more obvious dog whistles like “thug,” “inner-city youth” and “urban contemporary.” They’re all just polite ways to say (or whisper) Black. And so, for the modern tech-savvy racist, to be against woke culture is a casual, more acceptable form of anti-Blackness (i.e., no white hood necessary).

The thing is, there’s the larger, concurrent issue of digital blackface and over-usage of African-American Vernacular English by non-Black people, both online and off, which complicates things and ultimately makes it more difficult to point out how a word like “woke” functions as a dog whistle. As soon as fast-food chains are calling each other bae as they ask who will spill the tea — or Arby’s is tweeting about how lit its dipping sauces are — the words become nothing more than memes of Blackness, bled of their authenticity completely.

Along those lines, in 1962, writer William Melvin Kelley wrote an essay for the New York Times that had the extra-hip title: “If You’re Woke You Dig It.” It’s the first-known use of woke in modern media. In his piece, Kelley examined how Black words come into being as tools of the uniquely Black experience. And how this is due to the fact that “the only time a Negro can forget he is a Negro is when he is with Negroes.” Black speech had a self-protective and restorative function. It was ours.

Kelley next notes how young white people prize Black language for its vitality, musicality and directness. So they borrow it, but the language is never given back. The “borrowed” Black speech travels with these white people, and they use it in spaces where Black people weren’t welcome. Thus, it no longer meaningfully signifies Black life and forces Black Americans to “consciously invent a new term as soon as they hear the existing one coming from white lips.”

This is certainly how “woke” stopped being a Black word, and explains why today it’s primarily used by white people, mostly to sneeringly refer to Black life or the sort of Black-positive worldview that white allies advocate for online and in protests.

It’s both expected and wild that a word that started as a way for Black people to urge each other to stay safe and remain healthy and sane in a country that often attempts to destroy us now mostly means the polar opposite. Or as a few different commenters on Twitter pointed out after conservative writer Andrew Sullivan used it as a smear last week, these days, woke might as well have a hard r. 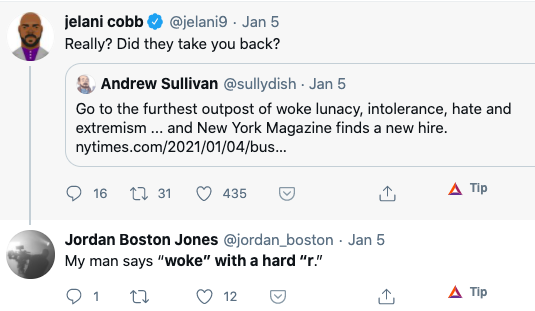