With ‘The King of Staten Island,’ Judd Apatow Finally Finds a Screw-Up He Can’t Fix

“I like movies about people who are a mess,” Judd Apatow told Rolling Stone in 2015, an understatement coming from the director of Knocked Up, Funny People and Trainwreck. In that same interview, he tried to articulate his fondness for screw-ups: “There are all sorts of people trying to get their acts together,” he explained, later adding, “We’re all trying to connect, and when you’re young or immature or damaged, it’s tricky to figure out how to make it work.”

From that perspective, Apatow’s body of work can be seen as an ongoing chronicling of human messes who finally find some sort of order. In his world, chronic screw-ups are perpetually crawling toward maturity, slowly remaking themselves into the better people they’d like to be. At 52, Apatow is reaching an age where arrested-development stories probably shouldn’t be that interesting anymore — he runs the risk of not evolving himself — but as his latest, The King of Staten Island, suggests, he seems to possess a boundless compassion for those stumbling through life. In fact, this might be his most poignant film — partly because it’s about his most damaged protagonist, and the one most resistant to the heartwarming treatment Apatow usually applies to his characters.

The King of Staten Island is a semi-autobiographical riff from Pete Davidson, who stars in and co-wrote this comedy-drama about a very Davidson-esque individual named Scott, who’s in his mid-20s and a total disaster. Anyone familiar with the SNL star will recognize the real-world parallels in this story: Like Davidson, Scott had a firefighter dad who died in the line of duty, and both Davidson and the character battle mental health issues. Plus, Scott very much resembles the Davidson we see on SNL and on stage — tattooed, wiry, eyes darting around to signal his obvious discomfort. (Davidson, who himself is 26, has even said that making The King of Staten Island was therapeutic, allowing him to “just really lay it all out there and be able to heal and move on from it, instead of, every day, feeling sorry for myself.”)

If, like me, you find Davidson an inherently fascinating, sympathetic, sometimes frustrating figure, the movie will have extra emotional heft. But even so, what’s striking about The King of Staten Island is that Davidson seems to have pushed Apatow out of his comfort zone a little. Apatow has always been invested in characters trapped in perpetual adolescence, but Scott brings out newfound depth and parental concern in the filmmaker. Other Apatow protagonists were delightfully immature — by comparison, Scott feels legitimately unwell. This is a comedy about a character whose circumstance isn’t funny at all.

We get a sense of this from the start as Scott (Davidson) drives down a busy highway, suddenly and recklessly closing his eyes as he grips the wheel. After a few tense moments, he finally opens them, managing to barely avoid smashing into a car in front of him. It’s unclear if he wanted to kill himself or simply cause some destruction, but The King of Staten Island’s uneasy opening serves as a warning. Scott could go off at any moment — it’s only a question of when and what the damage will be.

Sitting around getting stoned and watching TV, Scott has no plan for his future. (He’s an aspiring visual artist, but his ADD made it hard to focus in art school, prompting him to drop out.) He lives in his childhood home with his widowed mom Margie (Marisa Tomei), who loves him but doesn’t know what to do — and when Scott’s smart, focused younger sister Claire (Maude Apatow) heads off to college, his sibling worries that Scott will only get worse without her to look after him. Scott has an occasional girlfriend, childhood pal Kelsey (Bel Powley), but even that seems like a dead end. (He mostly just likes having someone to have sex with, although his antidepressants make that a drag, too.) 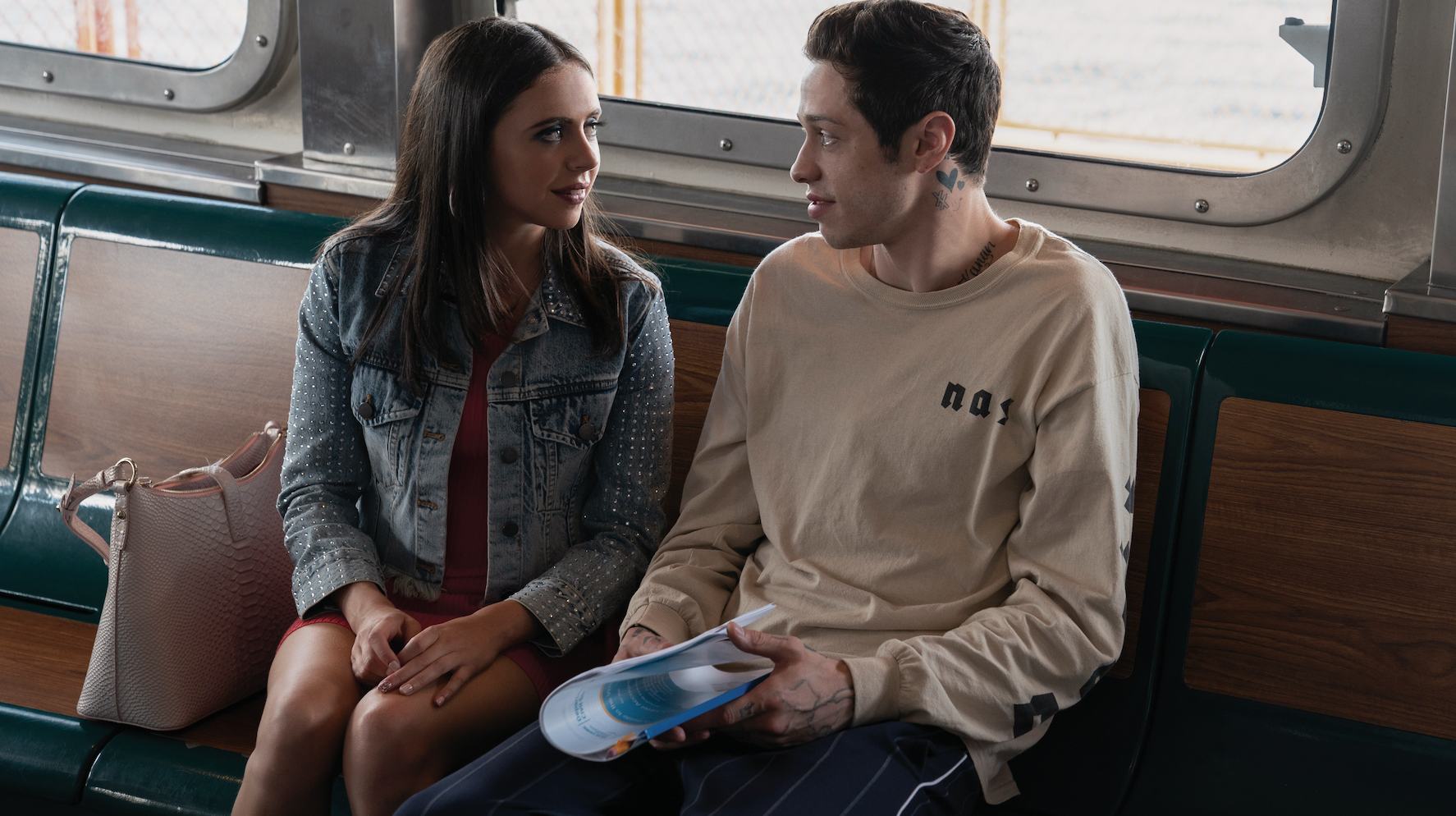 From that setup, not only can you recognize The King of Staten Island as a typical Apatow film, you can probably guess where it’s going to go. Will Scott eventually grow up and change his ways? Well, sorta — and the path to enlightenment will be much rockier.

In Apatow’s initial films, such as The 40-Year-Old Virgin and Knocked Up, sheltered, spoiled men had to stop behaving like little boys and face adulthood. (In Funny People, that scenario reached its apex, as two male comics of different generations grappled with the realization that their immaturity made them funny at the expense of everything else.) But Trainwreck offered a fresh perspective not just because it had a female protagonist — it also presented Amy Schumer’s aspiring journalist as emotionally abusive and possibly an alcoholic. The character wasn’t nearly as adorable as Apatow’s previous man-children, and Schumer and the filmmaker weren’t interested in coddling her.

The King of Staten Island goes even further in that direction. Scott is complicated and troubled — an angry, self-loathing burnout who has a hard time around most people — and so Apatow and Davidson recognize that giving him a conventional rom-com happy ending would be disingenuous. As is often the case with Apatow’s films, The King of Staten Island meanders through its baggy plot as Scott wanders from digression to digression. But that somewhat unfocused approach actually serves its main character, who is genuinely searching without a roadmap. It’s an appropriately untidy film, just as unsure as Scott is about where it’s going next.

The film convincingly argues that Scott never got over his dad’s death. (Unlike Davidson’s father — who was also named Scott and died during 9/11 — Scott’s dad perished in a house fire.) And while The King of Staten Island feels for him, it also walks a delicate line, illustrating how Scott has used that tragedy (alongside his mental health struggles) as an excuse not to move on with his life. As played by Davidson, Scott is a bright guy who seems permanently shut down, resisting any sort of forward momentum and falling back on cynicism. The King of Staten Island’s opening scene is the only time we see Scott consciously ponder suicide, but the movie is filled with moments in which it’s apparent that he’d be content to shrivel up and disappear. But how do you shake someone out of a funk when it’s clear the problems go far deeper than just being unmotivated?

Because Scott doesn’t care about his future, his mom decides she has to intervene — albeit indirectly. His life gets thrown into turmoil once Margie starts dating Ray (Bill Burr), a local firefighter and the first man she’s been with since Scott’s dad. Scott views her new relationship as a betrayal of his father’s memory — plus, he hates firefighters because of what happened to his dad — so being told that he’s going to have to move out now that Ray is moving in only sets him on a downward spiral. In previous Apatow movies, this sort of sequence might be comical, but in The King of Staten Island, it feels serious. Scott is broke, and his only aspiration — to be a tattoo artist — isn’t going to come to fruition because he’s not very good. Combative and defeated even at the best of times, Scott loses what little stability he has left when Margie says he has nine months to find a new place.

When Davidson has appeared on Weekend Update, he’s conveyed an edge that never felt manufactured — he simply vibrates on a different wavelength, giving off a volatile, untamed energy. He utilized that off-kilter vibe to be really funny — his sardonic punchlines always seem like tossed-off afterthoughts — but when he started being honest with his audience, telling viewers about his trips to rehab, it made his comedy vulnerable and endearing. You wanted to laugh and hug him in equal measure, although his spiky demeanor fought against such cuddly responses. He came across as a guy who’s had his share of difficulties but didn’t want your goddamn pity.

That prickliness creates an engaging tension with Apatow, whose comedy has very much tended toward the sentimental. (His goofballs may be rude, crude and lewd but, gosh darn it, they always have hearts of gold.) The King of Staten Island isn’t Apatow’s best film, but it’s muted and a little less cheerful than his earlier work — it’s fittingly sober in light of its difficult protagonist, who lashes out at the people closest to him and has a snide response for every situation.

When the hard-ass Ray tries to soften a bit while buddying up with Scott, the kid won’t meet him halfway. A trip to a local minor-league game with Ray and his firefighter chums leads to Scott insulting the guys and explaining why it’s selfish for any of them to have kids. The source of the pain is obvious — his dad’s death still festers — but his behavior is so needlessly petulant that it’s one of the rawest scenes in any Apatow film. It’s to Apatow’s credit, though, that he doesn’t try to make us feel better about Scott’s nasty acting-out: He respects the character (and Davidson) enough not to pity him. 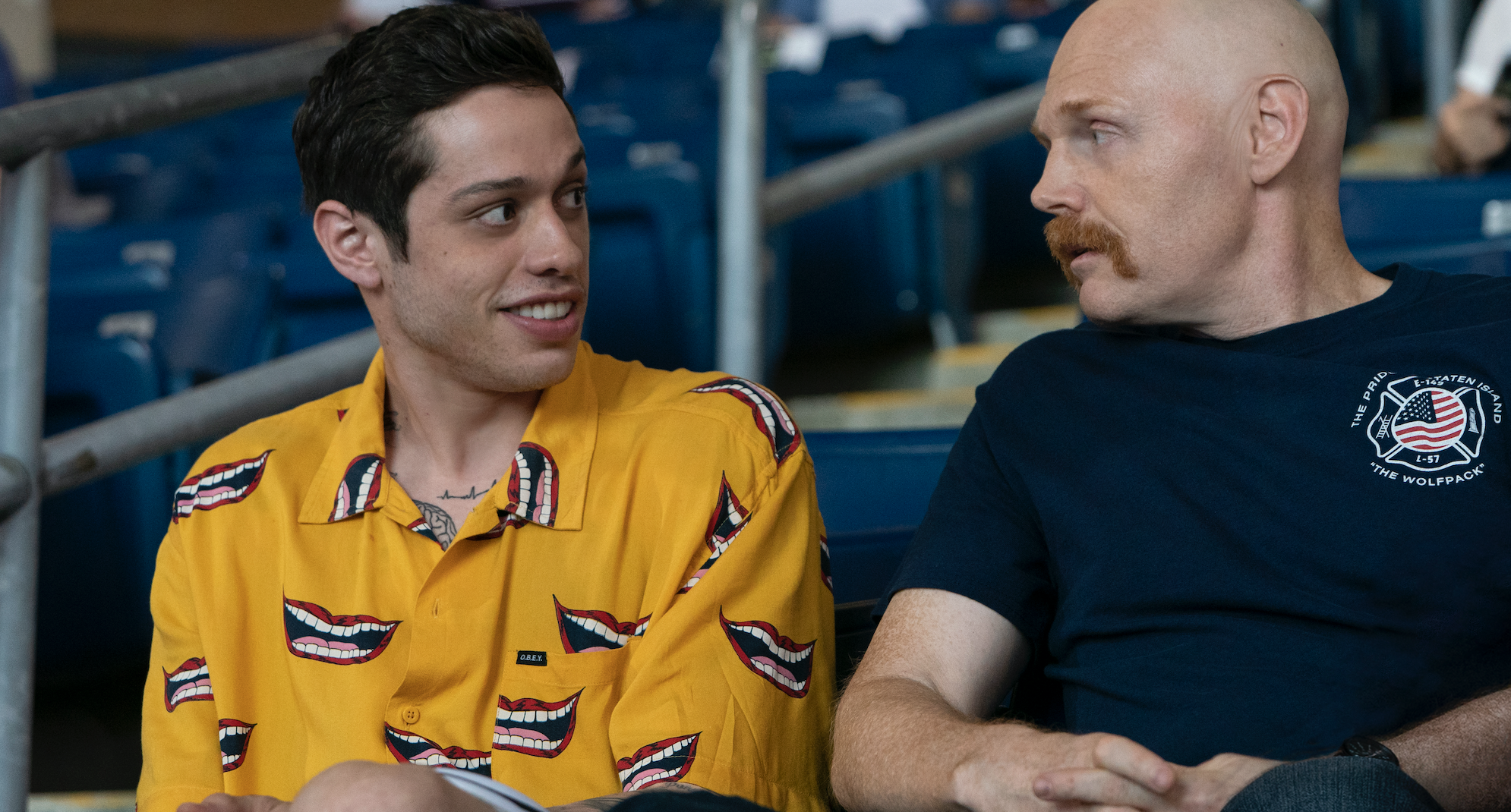 That said, The King of Staten Island does have its cutesy passages — Scott will begrudgingly befriend Ray’s sweetie-pie kids — but even then there’s an acidity that pushes back at the potential treacle. (Steve Buscemi as the fire station chief is especially good at being the tough-love father figure Scott doesn’t know he needs.) And it helps that Davidson brings an unfiltered authenticity to the role. It’s too easy to assume that he’s just “playing himself” — the performance is far more nuanced than that — but Davidson is obviously tapping into real anger and confusion by playing Scott, perhaps viewing the character as a worst-case scenario for what could have happened to him if not for comedy. Because Davidson doesn’t outwardly seem that different from Scott, we constantly wonder while watching The King of Staten Island how close the comic got to choosing the other path.

For all the raunch in his R-rated comedies, Apatow has always been a softie, always believed that his screw-ups will find their place, usually through a healthy romantic relationship. But some people’s problems can’t be so easily cured. What makes The King of Staten Island especially touching and wise is that the film arrives at an ending that’s less “happy” than it is anxiously optimistic.

With most Judd Apatow films, I walk away feeling like the characters are going to be okay — he’s eternally optimistic about our potential to fix ourselves. But The King of Staten Island is a little less certain, not because it doesn’t believe in Scott but because the film knows how hard life will continue to be for him. In that way, Apatow seems to have learned something important: You can’t always impose a happy ending on your characters — sometimes, you have to have faith in people that, eventually, they’ll find it for themselves.