Why This Business Bro Can’t Live Without His Psychic

One Thursday night a month, Robert, a financial analyst in his 30s who works at a large London investment bank, goes to a small house in Brixton, South London, to inquire about his soul. Namely, while his co-workers spend the evening downing pints of lager, talking about football and trading gossip about foreign currency markets, Robert (a pseudonym) asks a psychic his most pressing life questions. For example: Should I quit my job? Should I start my own business? Should I marry my girlfriend?

In his sessions, which usually last an hour, Robert listens intently and takes notes as his psychic reveals the meaning of each of the tarot cards he’s chosen. At the end, he feels he has more clarity and focus and is able to perform better at work. Even better, he now considers himself a more caring, empathetic boyfriend.

Still, he’s yet to tell anyone at work about the tarot readings. “There’s a stigma around men who believe in psychics, astrology and horoscopes,” he says. “There’s professional reasons why I don’t say anything either. When you work in finance, you’re supposed to give the perception that you’re in control, that you can think logically. Saying you go to a psychic undermines that.”

Sitting in a pub near his office, Robert explains how he, like most straight men he knows, was “immediately weirded out by the idea of psychics” when Emma, his girlfriend of four years, told him that she and her friends regularly see them. “We had a lot of arguments where I was pretty shitty about it,” he says. “During fights about who would be cleaning or doing the cooking, I’d use her going to a psychic as a way to point score against her.”

This, though, didn’t stop Emma from telling him about what her psychic would say about their relationship. “After speaking to the psychic, she realized that she was being taken for granted in our relationship,” he says. “I remember one time we had gone out for dinner, and she explained how she had, unknowingly, taken on the majority of household chores — from the laundry, to making the bed, to buying food.”

Male animosity toward practices like astrology are well-documented, especially at a time when a record number of millennials are becoming interested in Zodiac charts, horoscopes and tarot cards. In her VICE piece “Why Straight Men Hate Astrology So Much,” the straight males Hannah Rose Ewens interviews refer to people who believe in astrology as “mindless bimbos” and the practice as a “waste of time. Waste of energy. Waste of chip paper. It’s like the lottery for lonely people.” Adds one of her interview subjects, “It strips people of their uniqueness and reduces them to pigeonholed blocks of characteristics. I don’t like being a real logic lord about it, on some ‘I am the ultimate skeptic! Facts don’t care about your feelings, compadre!’ vibe. However, I do find it really fucking irritating, and the memes are all really annoying and I hate the self-aggrandizement of ‘[Star Sign] Season Bitches!’”

Robert’s original perception of astrology/horoscopes/tarot cards was reinforced by his job. “There’s obviously a big focus on logic and evidence-based problem solving in the financial industry,” he says. “Unless you have numbers to back up a claim — or a report or some kind of citation — it’s difficult to convince anyone that you’re right.” The irony of that sentiment, though, isn’t lost on him. “So much of finance is based on speculation,” he adds. “And when you really get down in those numbers, you find that most predictions in the financial world are based on hunches, or on assumptions in economics — and quite often, those decisions are wrong.” He believes it’s this larger financial truth that ultimately opened his mind to psychics.

Robert didn’t tell me much about his psychic, other than the fact that she’s in her late 30s and works as a psychic in the evenings after her day job. He found her on Facebook around three months ago and messaged her out of curiosity. She offered him a complimentary session, one that, according to Robert, “she was used to giving to people who were skeptical of astrology.” Probably for that reason, it felt more like a doctor’s appointment than anything spiritual or mystical. “I expected lots of crystals and candles — you know, all the cult-like things you see on TV. I was surprised when it was just sitting at her table in her apartment, being offered a cup of tea.”

This was likely a deliberate strategy. “I’m definitely a lot more linear in my approach with male clients, where I treat [the reading] like it’s a business meeting,” says Chrissy Tolley, a psychic based in Tucson, Arizona. “There’s also around five minutes at the beginning where I almost have to suck up to them, to make them feel safer so they can open up and be more vulnerable. With women, I might react to something they say with, ‘Oh my god, what are you doing? Stop doing that right now!’ But with men, I have to reassure them that they have control. That’s particularly the case when the men who come to me are older, have more money than me or are more established professionally.”

That said, Tolley adds that she has an acute understanding of what her male clients want, often before they even speak. “I have to emphasize that I offer clarity — not truth — about their future. I tell them straight up that they’re in control of their lives and the decisions they make. Often that’s because a lot of guys I work with are [conditioned] in a society where there’s this huge expectation that they should know and provide everything, and that, if they can’t, they’ve failed as men.”

The emphasis on clarity was something Robert noticed during his first tarot reading. “Even before I shuffled the card deck, she told me that this wasn’t a fortune telling, that it was just an interpretation that I could choose to use — or not,” he remembers. When he chose his cards — a Five of Pentacles, a Ten of Swords and The Lovers — he was surprised to learn that they didn’t directly point to “a life-changing moment coming my way, like a breakup.” Instead, Robert says, “She told me that the cards represented things to think about. The relationship component was a big part of it, but more in the way of inviting a conversation about what I thought it meant. And the more we talked about it, the more I was able to think about how I was in my relationship, in a way that I hadn’t really done before.”

On the other side of the tarot-card table is Ian Nemontemi, from Albuquerque, New Mexico. He’s a mechanical engineer by day, but his interest in astrology led him to start learning about tarot cards, which he’s now been reading for a decade. While Nemontemi isn’t a professional reader, he has given readings to male friends at parties. “There are always a few who are completely closed off to the idea,” he explains. “But more often than not, they come around when I tell them something along the lines of, ‘You’re free to make of it what you will; the cards are a tool.’”

I ask Robert if he considers himself part of a larger trend of men seeking out psychics, or just an outlier. “I benefit personally from seeing one, but even with all the recent campaigns around mental health, there are still men who don’t talk about how they’re feeling. They still aren’t open, especially in the corporate world. So there has to be a bigger cultural change. Like, there’s even still a part of me that questions how valuable it is. Plus, I know that if people at work find out, I won’t live it down. That’s not a healthy environment for anyone and needs to change.”

But what about his friends — he’s surely ready to tell them, right? “I’m not sure,” he sighs. “Maybe I’ll find out in a few weeks.” 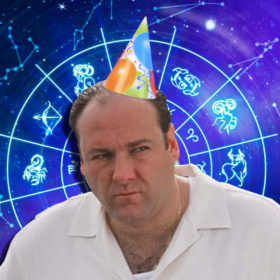 Happy Birthday Tony Soprano! I Had an Astrologer Do Your Birth Chart