The Boozy Nostalgia of a Vodka-Soaked Watermelon

My dad used to soak watermelon in vodka and then send the rind down the river like a little boat. Now, as an adult, I’m riffing on this tradition in my own way

During my summers as a kid, there was often a watermelon stored on the top shelf of the refrigerator that I wasn’t allowed to eat. It was the “adult” watermelon, I was told, spiked with vodka.

Most of my childhood memories colored by alcohol aren’t fond, but the ones involving this off-limit fruit are. While the flesh of the watermelon wasn’t for me, on one particular occasion, the rind was. After my parents and their friends finished scooping out the booze-soaked guts, my father carved one half of the watermelon’s green exterior into a type of jagged ship, fashioned a makeshift flag atop a kabob skewer and stabbed it into the core of the rind. I got to watch him cast it off into the river in our western Massachusetts backyard, imagining the delight of whoever might spot it miles downstream.

Today, I no longer live on a river, defeating my odds of crafting a boat to set off on it. But as an adult, I have the opportunity to relive the other parts of that memory, namely the ones I couldn’t participate in when I was young. And so, this week, I acquired a watermelon and a 750-milliliter bottle of Tito’s, and formed them into one.

Combining watermelon and alcohol isn’t exactly a novel idea — there are hundreds of different recipes out there, from fancy Glenfiddich watermelon coolers to tequila-watermelon punch to straight-up watermelon-flavored Smirnoff. But combining a whole watermelon and a bottle of plain vodka is the simplest iteration of the concept.

It’s easy to do: Using just about any watermelon and any long-necked bottle of vodka (you could choose any liquor, but vodka is most common), you draw a circle on the watermelon slightly wider than the size of the vodka cap. Next, you carve out this circle, keeping it as a plug for later. With a spoon, you scoop out a few heavy spoonfuls of the guts. Then, as carefully as you can, you place the open bottle of vodka bottom-up into the watermelon hole. Twirl it around a bit, and you open up some more room in the melon. Lastly, you prop it up so it’s secure, then wait for at least 12 hours. Ideally, the vodka will seamlessly empty itself into the fruit. 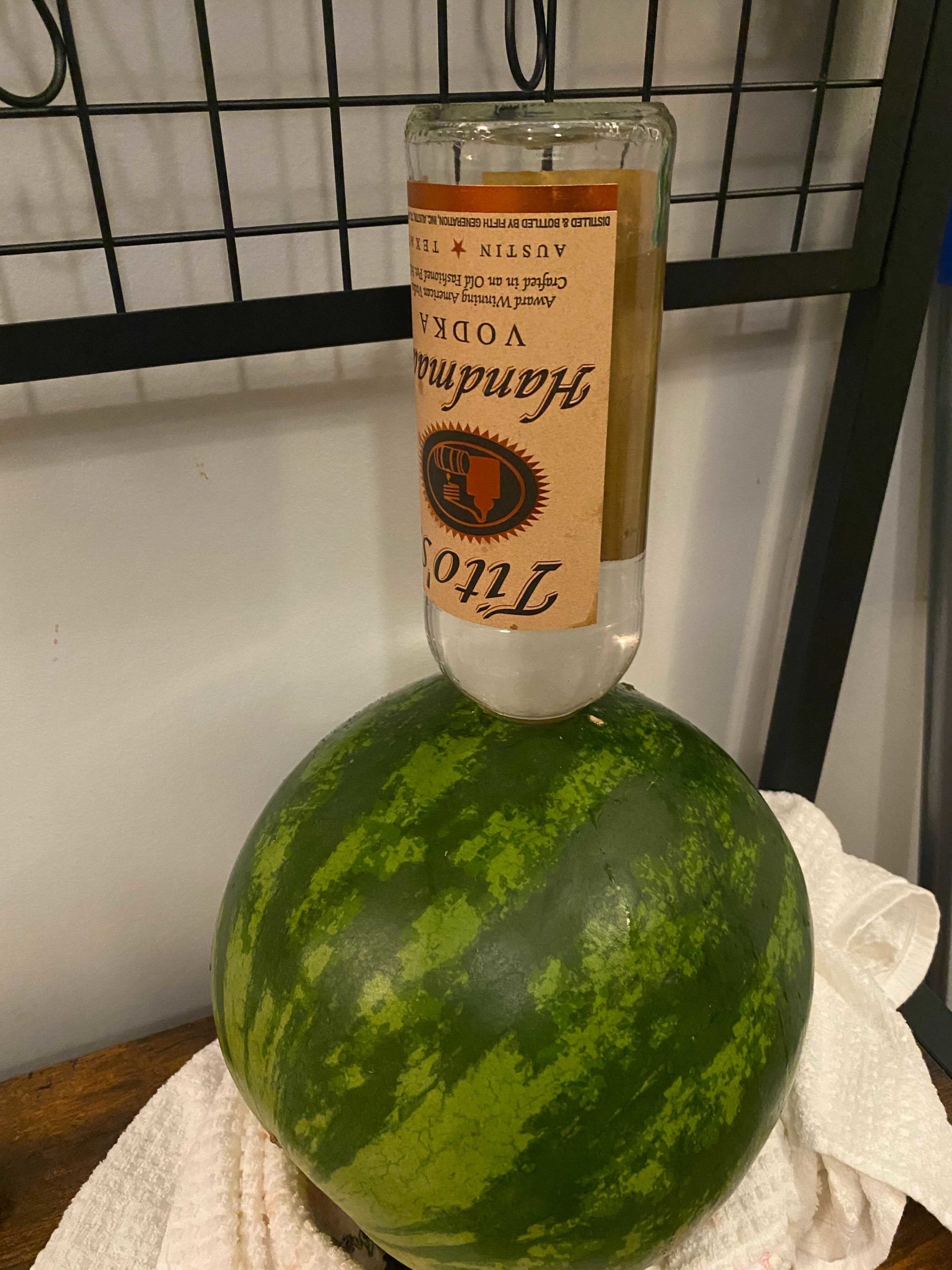 This didn’t quite happen for me, though. I had to give it a few twists every few hours to loosen up air bubbles and allow more vodka to spill into the watermelon. Around 15 hours later, only a little more than half of the bottle was emptied in. But to be honest, I was content with that quantity. I then let it chill in my fridge for several more hours, because as with most alcoholic beverages, it’s best served cold.

Last night, I cracked it open. The majority of the inner fruit had deepened to a grapefruit shade of pink. Cutting it made a huge mess — predictably, it was extremely juicy. I cut mine open atop a baking sheet, so I didn’t entirely ruin my kitchen with sticky vodka. After that, I carved out a wedge, hunched over the baking sheet and bit in. I’d managed to begin with the perfect piece, one that tasted equally like watermelon and vodka. With the rest of the melon, though, I wasn’t quite so lucky. Some bites tasted only like watermelon, while others tasted purely of vodka. There were bites so strong I shuddered as I ate them. 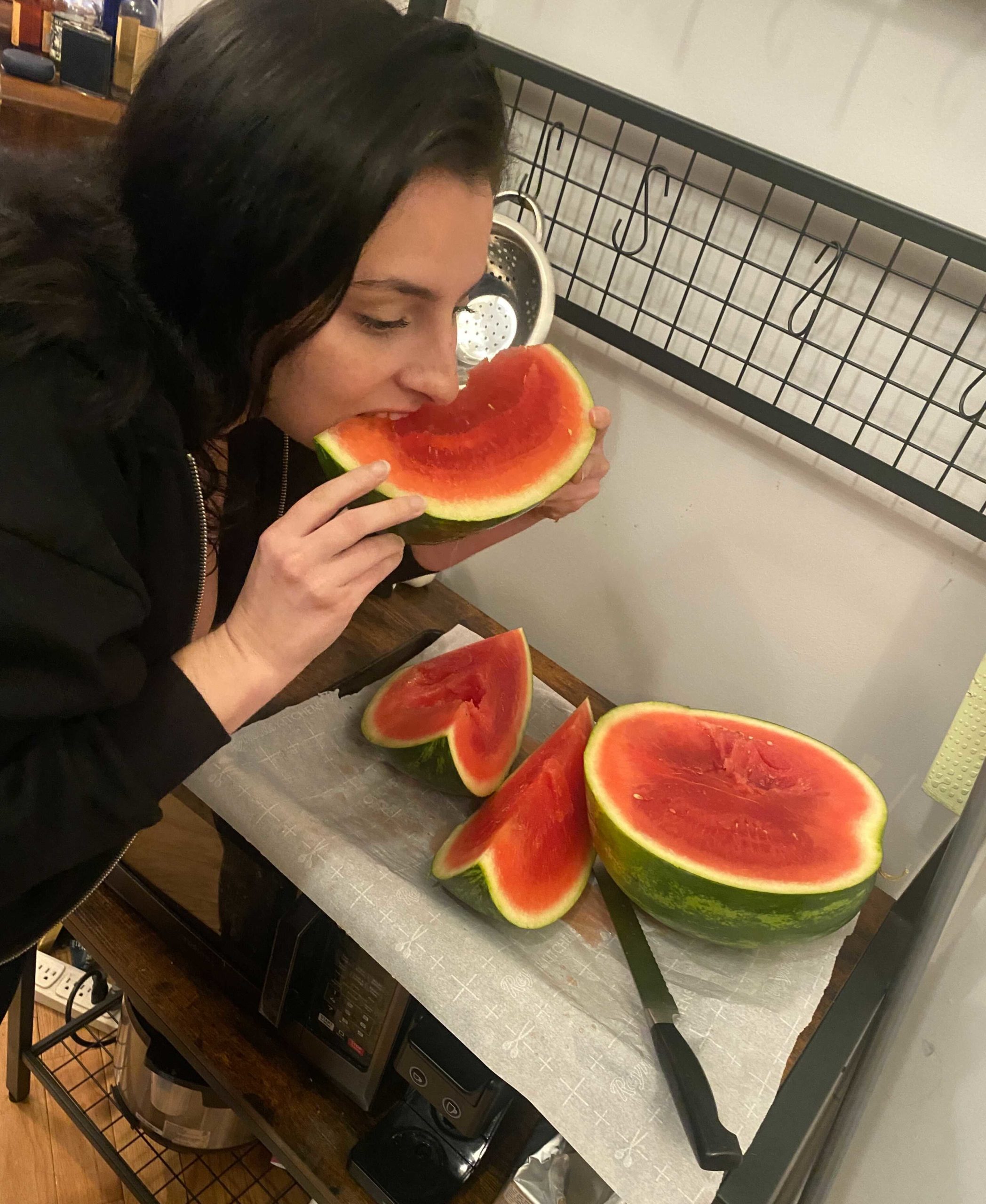 I told my father, who is sober now, about the experience, and how it seemed that the vodka had only saturated part of the watermelon. “If I were to do it, I’d just soak chunks in a jar of liquor,” he told me. “I love watermelon, but I’m not gonna do that any time soon.”

I probably won’t do that anytime soon, either, save maybe for a party — I think I prefer a boring vodka soda, instead. Looking back, the vodka was such an inconsequential part of my warm childhood memory. Any watermelon could be carved into a boat and sent off down the river. But to enjoy the vodka aspect of it all now feels, in some ways, like a reclamation of those not-so-good memories, too. I still have half of the watermelon left, currently sitting in my refrigerator. Perhaps, once I consume the rest with some friends, I’ll decide to turn its remains into a boat, after all.